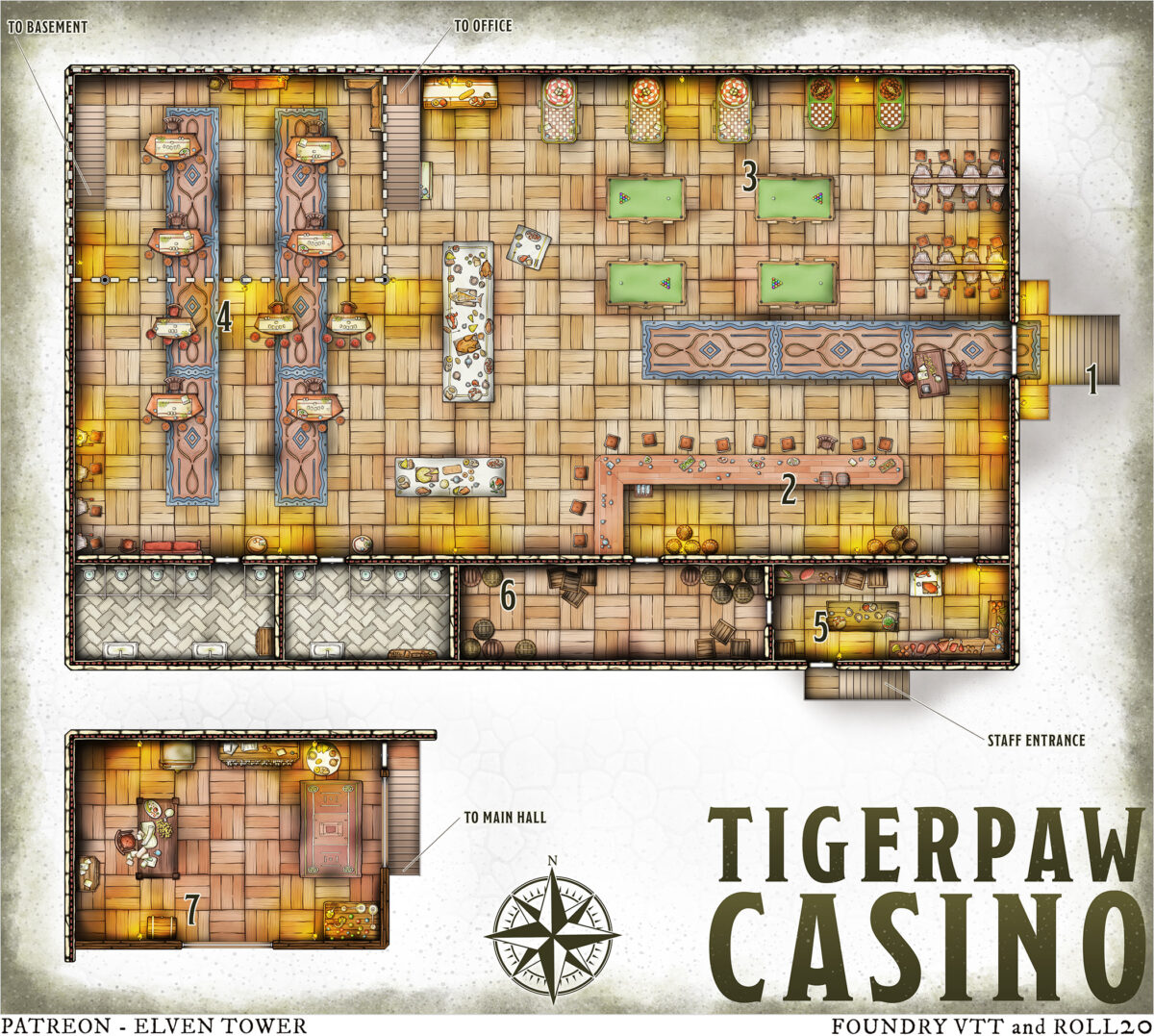 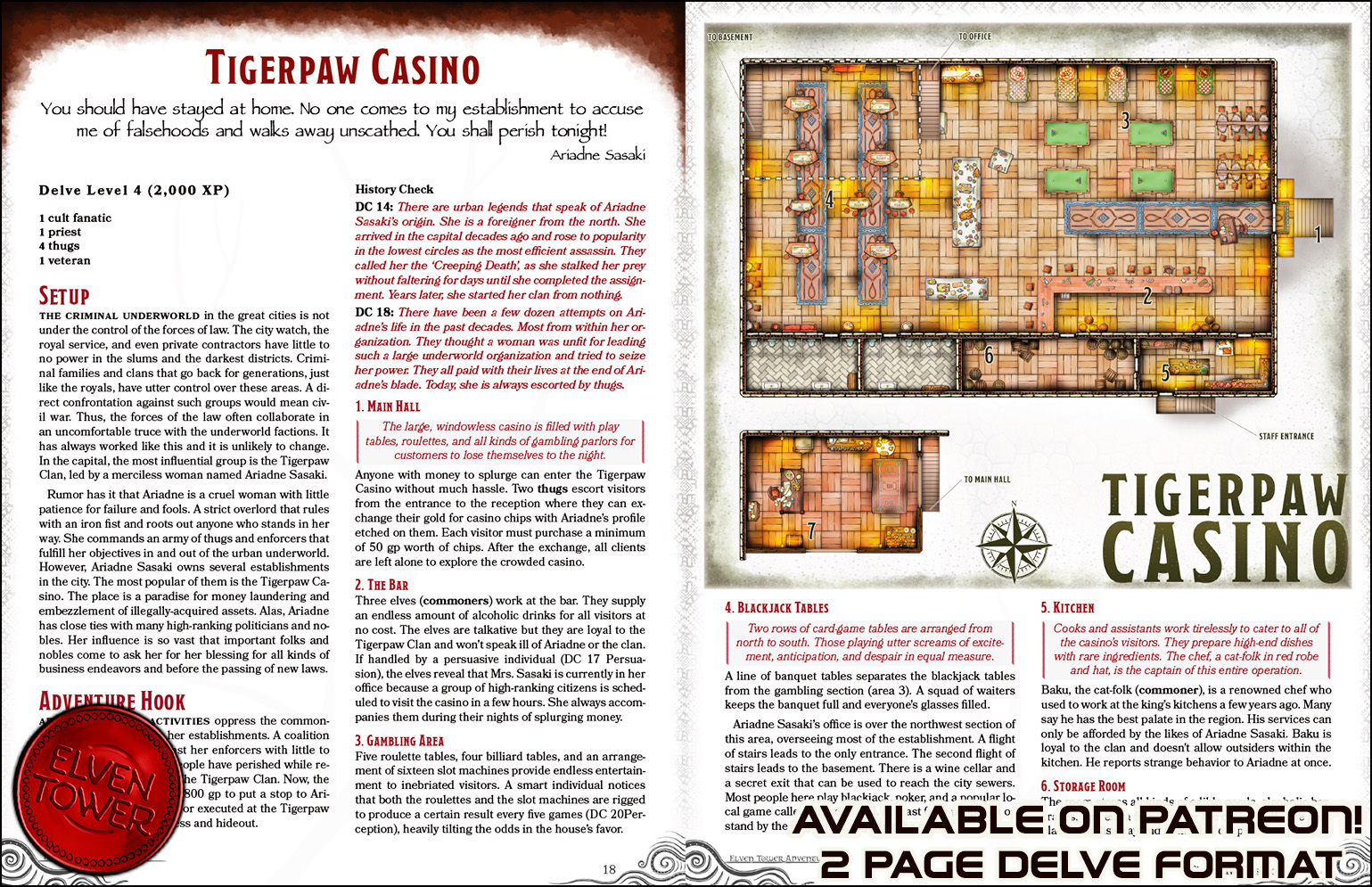 You should have stayed at home. No one comes to my establishment to accuse me of falsehoods and walks away unscathed. You shall perish tonight!

The criminal underworld in the great cities is not under the control of the forces of law. The city watch, the royal service, and even private contractors have little to no power in the slums and the darkest districts. Crimi­nal families and clans that go back for generations, just like the royals, have utter control over these areas. A di­rect confrontation against such groups would mean civ­il war. Thus, the forces of the law often collaborate in an uncomfortable truce with the underworld factions. It has always worked like this and it is unlikely to change. In the capital, the most influential group is the Tigerpaw Clan, led by a merciless woman named Ariadne Sasaki.

Rumor has it that Ariadne is a cruel woman with little patience for failure and fools. A strict overlord that rules with an iron fist and roots out anyone who stands in her way. She commands an army of thugs and enforcers that fulfill her objectives in and out of the urban underworld. However, Ariadne Sasaki owns several establishments in the city. The most popular of them is the Tigerpaw Ca­sino. The place is a paradise for money laundering and embezzlement of illegally-acquired assets. Alas, Ariadne has close ties with many high-ranking politicians and no­bles. Her influence is so vast that important folks and nobles come to ask her for her blessing for all kinds of business endeavors and before the passing of new laws.

Ariadne’s recent activities oppress the common­folk in the districts near her establishments. A coalition of citizens has risen against her enforcers with little to no effect. Many innocent people have perished while re­sisting the cruel actions of the Tigerpaw Clan. Now, the citizens offer a bounty of 1,800 gp to put a stop to Ari­adne. She is to be arrested or executed at the Tigerpaw Casino, her flagship business and hideout.

DC 14: There are urban legends that speak of Ariadne Sasaki’s origin. She is a foreigner from the north. She arrived in the capital decades ago and rose to popularity in the lowest circles as the most efficient assassin. They called her the ‘Creeping Death’, as she stalked her prey without faltering for days until she completed the assign­ment. Years later, she started her clan from nothing.

DC 18: There have been a few dozen attempts on Ari­adne’s life in the past decades. Most from within her or­ganization. They thought a woman was unfit for leading such a large underworld organization and tried to seize her power. They all paid with their lives at the end of Ari­adne’s blade. Today, she is always escorted by thugs.

The large, windowless casino is filled with play tables, roulettes, and all kinds of gambling parlors for customers to lose themselves to the night.

Anyone with money to splurge can enter the Tigerpaw Casino without much hassle. Two thugs escort visitors from the entrance to the reception where they can ex­change their gold for casino chips with Ariadne’s profile etched on them. Each visitor must purchase a minimum of 50 gp worth of chips. After the exchange, all clients are left alone to explore the crowded casino.

Three elves (commoners) work at the bar. They supply an endless amount of alcoholic drinks for all visitors at no cost. The elves are talkative but they are loyal to the Tigerpaw Clan and won’t speak ill of Ariadne or the clan. If handled by a persuasive individual (DC 17 Persua­sion), the elves reveal that Mrs. Sasaki is currently in her office because a group of high-ranking citizens is sched­uled to visit the casino in a few hours. She always accom­panies them during their nights of splurging money.

Five roulette tables, four billiard tables, and an arrange­ment of sixteen slot machines provide endless entertain­ment to inebriated visitors. A smart individual notices that both the roulettes and the slot machines are rigged to produce a certain result every five games (DC 20 Per­ception), heavily tilting the odds in the house’s favor.

Two rows of card-game tables are arranged from north to south. Those playing utter screams of excite­ment, anticipation, and despair in equal measure.

A line of banquet tables separates the blackjack tables from the gambling section (area 3). A squad of waiters keeps the banquet full and everyone’s glasses filled.

Ariadne Sasaki’s office is over the northwest section of this area, overseeing most of the establishment. A flight of stairs leads to the only entrance. The second flight of stairs leads to the basement. There is a wine cellar and a secret exit that can be used to reach the city sewers. Most people here play blackjack, poker, and a popular lo­cal game called Dragon’s Tail. At least forty people sit or stand by the play tables, enjoying the night.

Cooks and assistants work tirelessly to cater to all of the casino’s visitors. They prepare high-end dishes with rare ingredients. The chef, a cat-folk in red robe and hat, is the captain of this entire operation.

Baku, the cat-folk (commoner), is a renowned chef who used to work at the king’s kitchens a few years ago. Many say he has the best palate in the region. His services can only be afforded by the likes of Ariadne Sasaki. Baku is loyal to the clan and doesn’t allow outsiders within the kitchen. He reports strange behavior to Ariadne at once.

The room stores all kinds of edible goods, alcoholic bev­erages, and extra furniture for the casino hall. The dark place is in disarray and in need of deep cleaning.

The cruel woman they call the ‘Creeping Death’ sits behind a large wooden desk surrounded by her loyal bodyguards. Ariadne’s gaze is hateful and determined to defend her position of utter authority and power.

Ariadne’s desk is a work of art created by a skilled crafts­man. The oak piece of furniture features delicate carv­ings that display the Tigerpaw Clan sigil and scenes of a blade-wielding woman in varied battle postures.

The casino’s earnings are moved each hour from the reception desk to the safe box next to Ariadne’s desk. It contains a small fortune, the deed to the casino, and a few trinkets that have sentimental value to Ariadne.

If the characters climb to Ariadne’s office to confront her, they find her surrounded by an entourage of two thugs, one priest, and one cult fanatic. Each of them has proved their loyalty to Ariadne more than once and are trusted advisors in her business endeavors. She con­siders them friends and integral parts of her work.

Ariadne Sasaki does not suffer fools and is not initially open to negotiations. She sees the characters’ intrusion as a terrible insult. She draws her blade and charges into battle, along with her bodyguards. The two thugs in area 1 rush to battle two rounds later. If Ariadne drops to half her hit points, she offers a deal. She shall pay the charac­ters double the bounty they were promised in exchange for capturing the leaders of the coalition. If the charac­ters refuse, she flees through the sewers access in the basement described in area 4 to plot her revenge.

Ariadne Sasaki (veteran) does not fear soiling her hands. She draws her blade, curses the characters for their reckless actions, and charges forward. Her entou­rage of bodyguards tries to protect her from harm. The priest casts spirit guardians to keep the characters at bay and uses dispel magic to nullify any buffs on them or their weapons. The cult fanatic casts hold person on the strongest character to keep them out of the battle.

Features of the Casino

Lights. Sconces with continual flame spells illuminate the casino. The magic fades after one minute if removed.

Ambiance. The crowded casino has at least fifty cus­tomers in the main hall at any given time. If a battle starts, most of these people flee in a panicked state. There is a 2-in-6 chance that 1d6 commoners and 1d3 bandits re­main to help Ariadne’s enforcers out of sheer loyalty or to prove themselves to the Tigerpaw Clan’s leader.

Treasure. Executing Ariadne or presenting her to the coalition of city-folk allows the characters to collect the 1,800 gp reward. The safe box in area 7 contains 8,600 gp. The small safe box at the reception desk in area 1 contains 600 gp. The underworld and some nobles rise against the characters if they take Ariadne’s wealth.

Injustice. If Ariadne is arrested, the citizens attempt to behead her the next morning. Unfortunately, they are stopped by the corrupt city watch. They rescue Ariadne Sasaki and restore her to her former position of power. 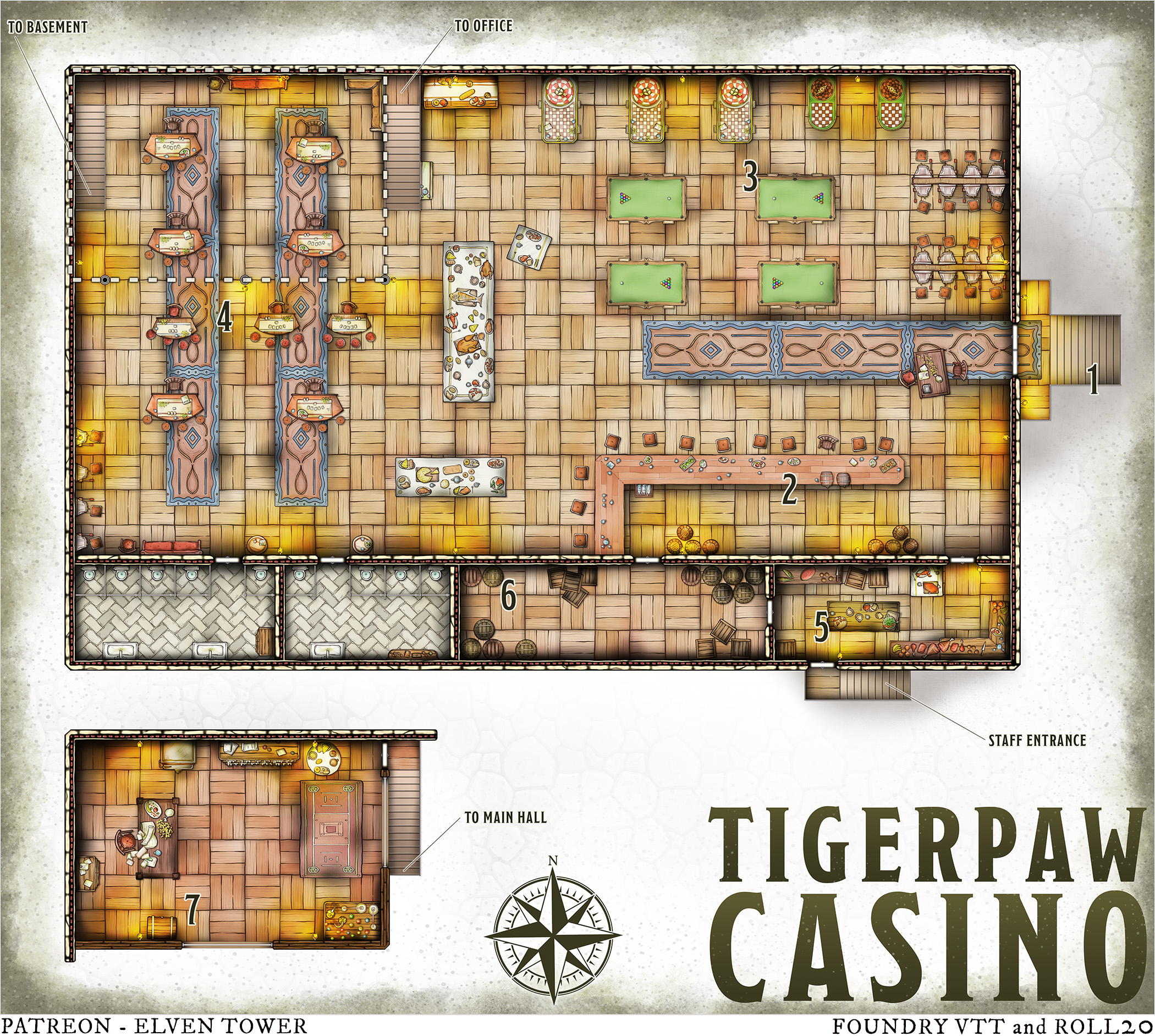