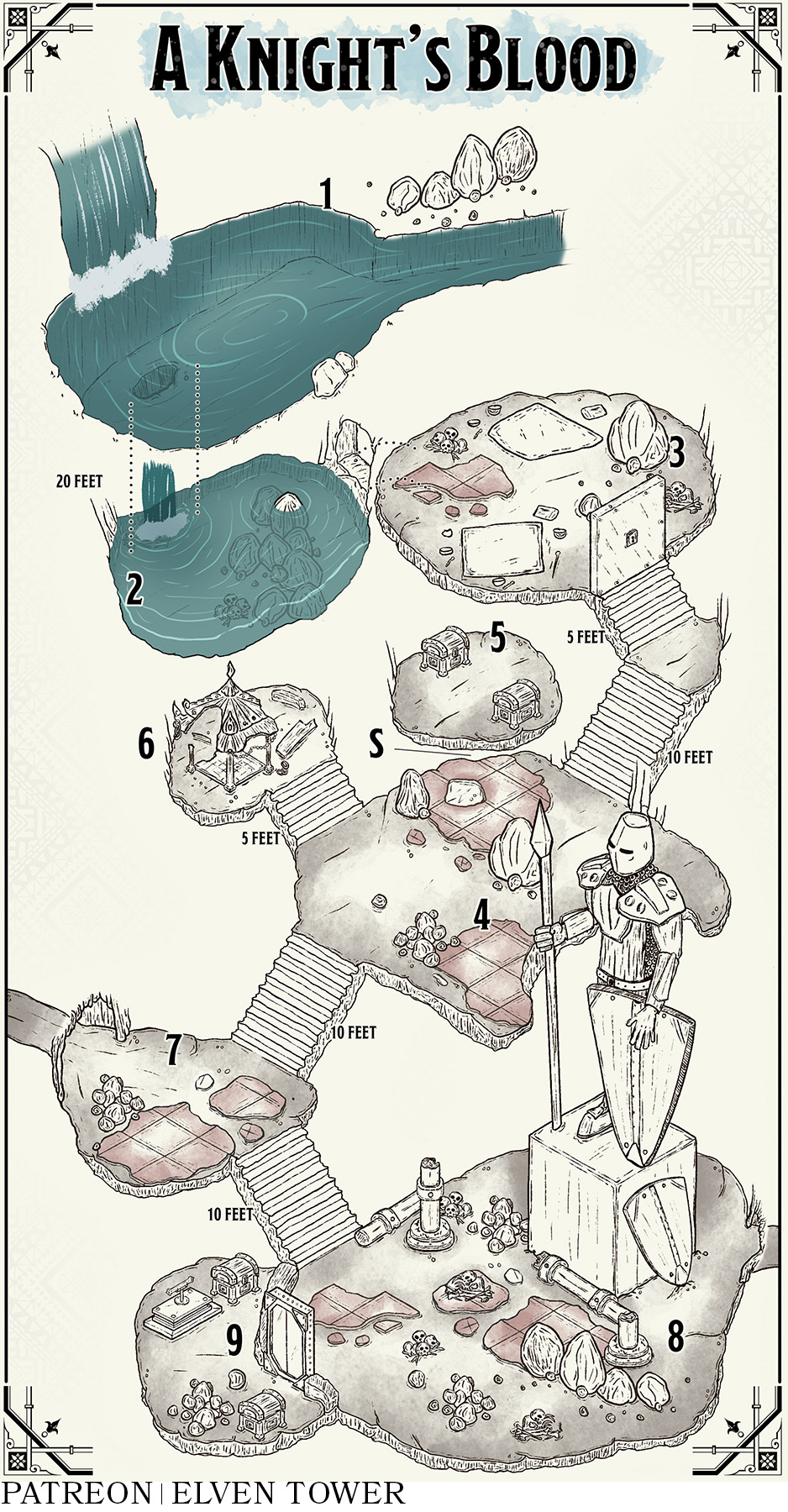 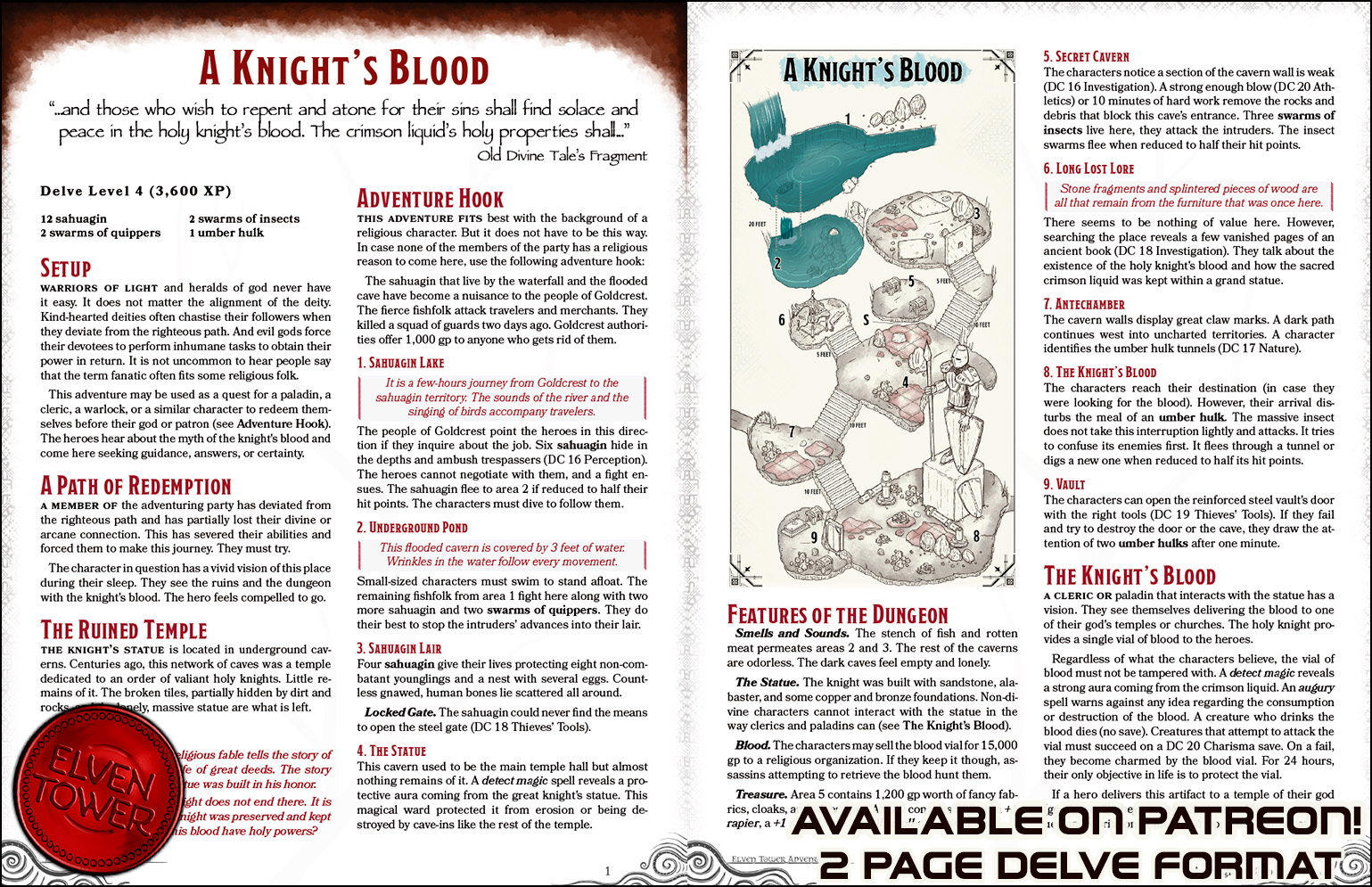 “…and those who wish to repent and atone for their sins shall find solace and peace in the holy knight’s blood. The crimson liquid’s holy properties shall…”

Warriors of light and heralds of god never have it easy. It does not matter the alignment of the deity. Kind-hearted deities often chastise their followers when they deviate from the righteous path. And evil gods force their devotees to perform inhumane tasks to obtain their power in return. It is not uncommon to hear people say that the term fanatic often fits some religious folk.

This adventure may be used as a quest for a paladin, a cleric, a warlock, or a similar character to redeem them­selves before their god or patron (see Adventure Hook). The heroes hear about the myth of the knight’s blood and come here seeking guidance, answers, or certainty.

A Path of Redemption

A member of the adventuring party has deviated from the righteous path and has partially lost their divine or arcane connection. This has severed their abilities and forced them to make this journey. They must try.

The character in question has a vivid vision of this place during their sleep. They see the ruins and the dungeon with the knight’s blood. The hero feels compelled to go.

The knight’s statue is located in underground cav­erns. Centuries ago, this network of caves was a temple dedicated to an order of valiant holy knights. Little re­mains of it. The broken tiles, partially hidden by dirt and rocks, and the lonely, massive statue are what is left.

DC 14: A not-so-popular religious fable tells the story of a holy knight who had a life of great deeds. The story claims that a 30-feet-tall statue was built in his honor.

DC 17: The story of the knight does not end there. It is said that the blood of that knight was preserved and kept within the statue. Could this blood have holy powers?

This adventure fits best with the background of a religious character. But it does not have to be this way. In case none of the members of the party has a religious reason to come here, use the following adventure hook:

The sahuagin that live by the waterfall and the flooded cave have become a nuisance to the people of Goldcrest. The fierce fishfolk attack travelers and merchants. They killed a squad of guards two days ago. Goldcrest authori­ties offer 1,000 gp to anyone who gets rid of them.

It is a few-hours journey from Goldcrest to the sahuagin territory. The sounds of the river and the singing of birds accompany travelers.

The people of Goldcrest point the heroes in this direc­tion if they inquire about the job. Six sahuagin hide in the depths and ambush trespassers (DC 16 Perception). The heroes cannot negotiate with them, and a fight en­sues. The sahuagin flee to area 2 if reduced to half their hit points. The characters must dive to follow them.

This flooded cavern is covered by 3 feet of water. Wrinkles in the water follow every movement.

Small-sized characters must swim to stand afloat. The remaining fishfolk from area 1 fight here along with two more sahuagin and two swarms of quippers. They do their best to stop the intruders’ advances into their lair.

Four sahuagin give their lives protecting eight non-com­batant younglings and a nest with several eggs. Count­less gnawed, human bones lie scattered all around.

This cavern used to be the main temple hall but almost nothing remains of it. A detect magic spell reveals a pro­tective aura coming from the great knight’s statue. This magical ward protected it from erosion or being de­stroyed by cave-ins like the rest of the temple.

The characters notice a section of the cavern wall is weak (DC 16 Investigation). A strong enough blow (DC 20 Ath­letics) or 10 minutes of hard work remove the rocks and debris that block this cave’s entrance. Three swarms of insects live here, they attack the intruders. The insect swarms flee when reduced to half their hit points.

Stone fragments and splintered pieces of wood are all that remain from the furniture that was once here.

There seems to be nothing of value here. However, searching the place reveals a few vanished pages of an ancient book (DC 18 Investigation). They talk about the existence of the holy knight’s blood and how the sacred crimson liquid was kept within a grand statue.

The characters reach their destination (in case they were looking for the blood). However, their arrival dis­turbs the meal of an umber hulk. The massive insect does not take this interruption lightly and attacks. It tries to confuse its enemies first. It flees through a tunnel or digs a new one when reduced to half its hit points.

The characters can open the reinforced steel vault’s door with the right tools (DC 19 Thieves’ Tools). If they fail and try to destroy the door or the cave, they draw the at­tention of two umber hulks after one minute.

Smells and Sounds. The stench of fish and rotten meat permeates areas 2 and 3. The rest of the caverns are odorless. The dark caves feel empty and lonely.

The Statue. The knight was built with sandstone, ala­baster, and some copper and bronze foundations. Non-di­vine characters cannot interact with the statue in the way clerics and paladins can (see The Knight’s Blood).

Blood. The characters may sell the blood vial for 15,000 gp to a religious organization. If they keep it though, as­sassins attempting to retrieve the blood hunt them.

A cleric or paladin that interacts with the statue has a vision. They see themselves delivering the blood to one of their god’s temples or churches. The holy knight pro­vides a single vial of blood to the heroes.

Regardless of what the characters believe, the vial of blood must not be tampered with. A detect magic reveals a strong aura coming from the crimson liquid. An augury spell warns against any idea regarding the consumption or destruction of the blood. A creature who drinks the blood dies (no save). Creatures that attempt to attack the vial must succeed on a DC 20 Charisma save. On a fail, they become charmed by the blood vial. For 24 hours, their only objective in life is to protect the vial.

If a hero delivers this artifact to a temple of their god (good or evil), they atone for their sins. Misuse or contin­ued appropriation of the blood worsens their situation.