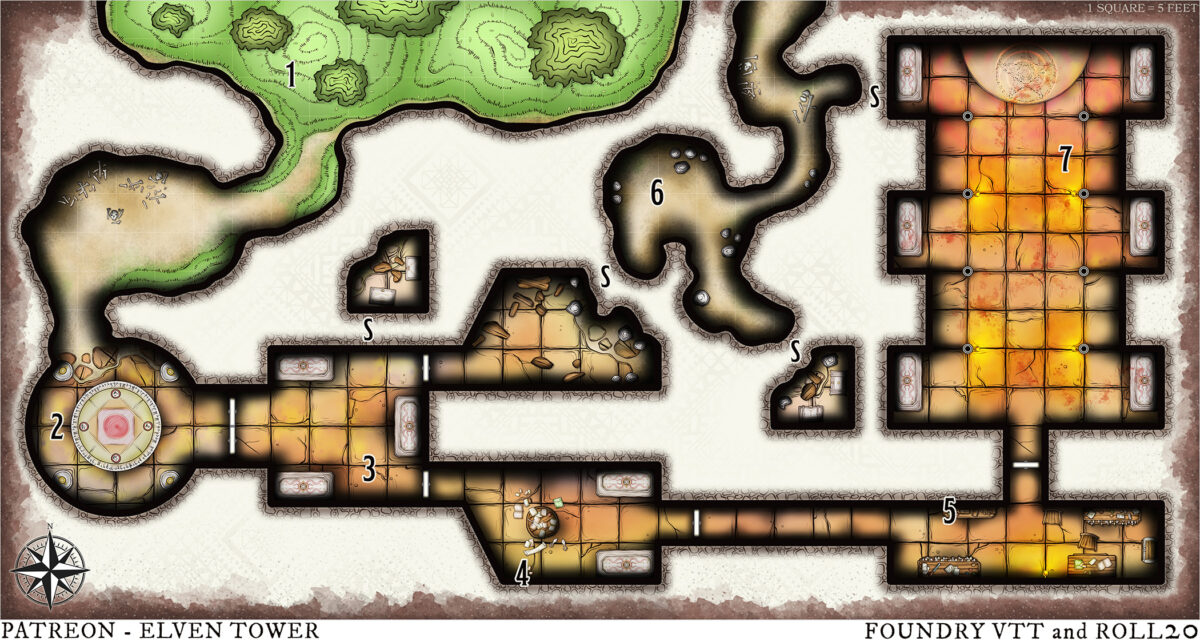 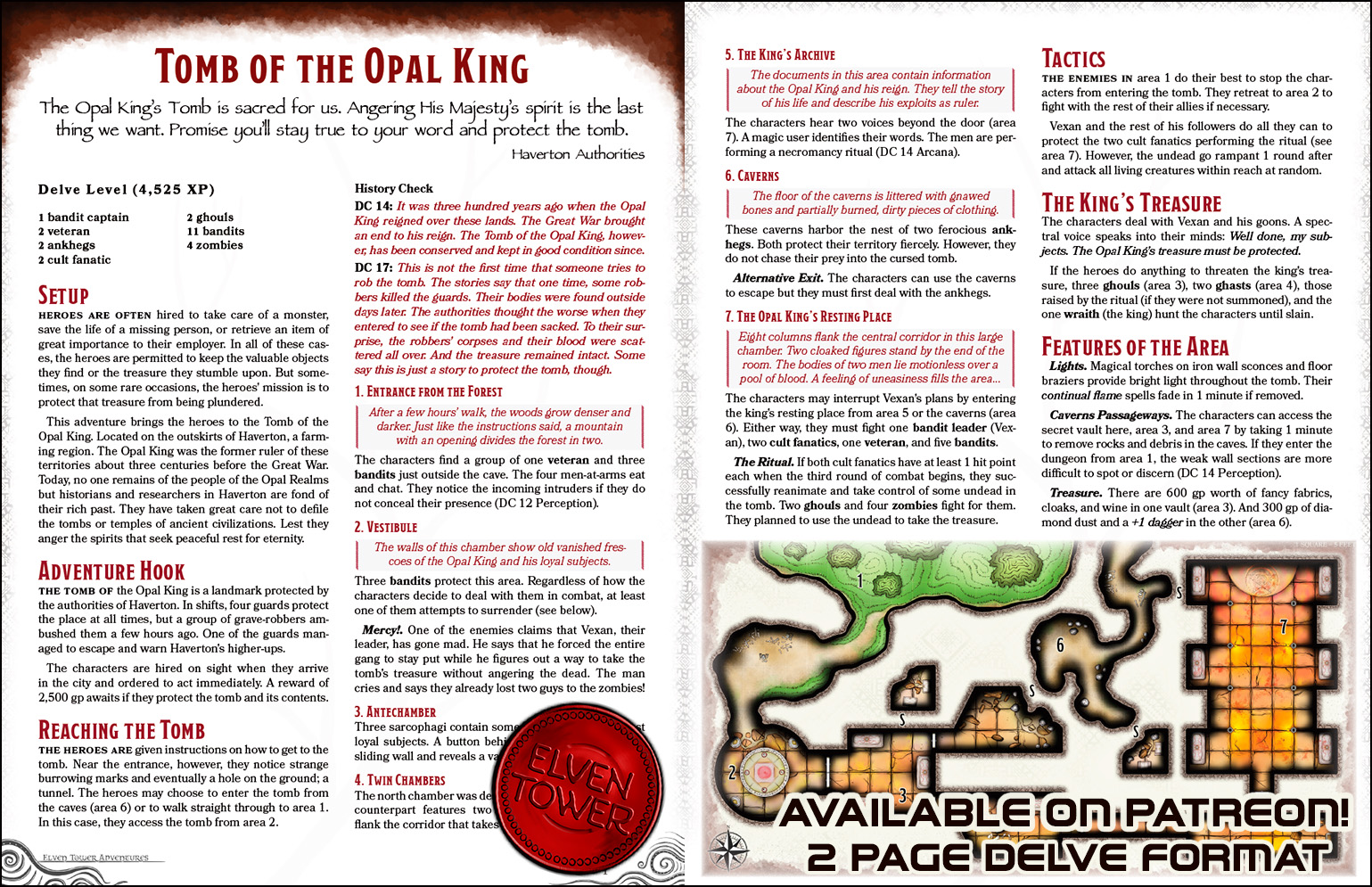 The Opal King’s Tomb is sacred for us. Angering His Majesty’s spirit is the last thing we want. Promise you’ll stay true to your word and protect the tomb.

Heroes are often hired to take care of a monster, save the life of a missing person, or retrieve an item of great importance to their employer. In all of these cas­es, the heroes are permitted to keep the valuable objects they find or the treasure they stumble upon. But some­times, on some rare occasions, the heroes’ mission is to protect that treasure from being plundered.

This adventure brings the heroes to the Tomb of the Opal King. Located on the outskirts of Haverton, a farm­ing region. The Opal King was the former ruler of these territories about three centuries before the Great War. Today, no one remains of the people of the Opal Realms but historians and researchers in Haverton are fond of their rich past. They have taken great care not to defile the tombs or temples of ancient civilizations. Lest they anger the spirits that seek peaceful rest for eternity.

The tomb of the Opal King is a landmark protected by the authorities of Haverton. In shifts, four guards protect the place at all times, but a group of grave-robbers am­bushed them a few hours ago. One of the guards man­aged to escape and warn Haverton’s higher-ups.

The characters are hired on sight when they arrive in the city and ordered to act immediately. A reward of 2,500 gp awaits if they protect the tomb and its contents.

The heroes are given instructions on how to get to the tomb. Near the entrance, however, they notice strange burrowing marks and eventually a hole on the ground; a tunnel. The heroes may choose to enter the tomb from the caves (area 6) or to walk straight through to area 1. In this case, they access the tomb from area 2.

DC 14: It was three hundred years ago when the Opal King reigned over these lands. The Great War brought an end to his reign. The Tomb of the Opal King, howev­er, has been conserved and kept in good condition since.

DC 17: This is not the first time that someone tries to rob the tomb. The stories say that one time, some rob­bers killed the guards. Their bodies were found outside days later. The authorities thought the worse when they entered to see if the tomb had been sacked. To their sur­prise, the robbers’ corpses and their blood were scat­tered all over. And the treasure remained intact. Some say this is just a story to protect the tomb, though.

1. Entrance from the Forest

After a few hours’ walk, the woods grow denser and darker. Just like the instructions said, a mountain with an opening divides the forest in two.

The characters find a group of one veteran and three bandits just outside the cave. The four men-at-arms eat and chat. They notice the incoming intruders if they do not conceal their presence (DC 12 Perception).

The walls of this chamber show old vanished fres­coes of the Opal King and his loyal subjects.

Three bandits protect this area. Regardless of how the characters decide to deal with them in combat, at least one of them attempts to surrender (see below).

Mercy!. One of the enemies claims that Vexan, their leader, has gone mad. He says that he forced the entire gang to stay put while he figures out a way to take the tomb’s treasure without angering the dead. The man cries and says they already lost two guys to the zombies!

Three sarcophagi contain some of the Opal King’s most loyal subjects. A button behind one of them triggers a sliding wall and reveals a vault (DC 15 Investigation).

The north chamber was destroyed by cave-ins. The south counterpart features two standing sarcophagi. They flank the corridor that takes to the king’s burial place.

The documents in this area contain information about the Opal King and his reign. They tell the story of his life and describe his exploits as ruler.

The characters hear two voices beyond the door (area 7). A magic user identifies their words. The men are per­forming a necromancy ritual (DC 14 Arcana).

The floor of the caverns is littered with gnawed bones and partially burned, dirty pieces of clothing.

These caverns harbor the nest of two ferocious ank­hegs. Both protect their territory fiercely. However, they do not chase their prey into the cursed tomb.

Alternative Exit. The characters can use the caverns to escape but they must first deal with the ankhegs.

Eight columns flank the central corridor in this large chamber. Two cloaked figures stand by the end of the room. The bodies of two men lie motionless over a pool of blood. A feeling of uneasiness fills the area…

The characters may interrupt Vexan’s plans by entering the king’s resting place from area 5 or the caverns (area 6). Either way, they must fight one bandit leader (Vex­an), two cult fanatics, one veteran, and five bandits.

The Ritual. If both cult fanatics have at least 1 hit point each when the third round of combat begins, they suc­cessfully reanimate and take control of some undead in the tomb. Two ghouls and four zombies fight for them. They planned to use the undead to take the treasure.

The enemies in area 1 do their best to stop the char­acters from entering the tomb. They retreat to area 2 to fight with the rest of their allies if necessary.

Vexan and the rest of his followers do all they can to protect the two cult fanatics performing the ritual (see area 7). However, the undead go rampant 1 round after and attack all living creatures within reach at random.

The characters deal with Vexan and his goons. A spec­tral voice speaks into their minds: Well done, my sub­jects. The Opal King’s treasure must be protected.

If the heroes do anything to threaten the king’s trea­sure, three ghouls (area 3), two ghasts (area 4), those raised by the ritual (if they were not summoned), and the one wraith (the king) hunt the characters until slain.

Caverns Passageways. The characters can access the secret vault here, area 3, and area 7 by taking 1 minute to remove rocks and debris in the caves. If they enter the dungeon from area 1, the weak wall sections are more difficult to spot or discern (DC 14 Perception). 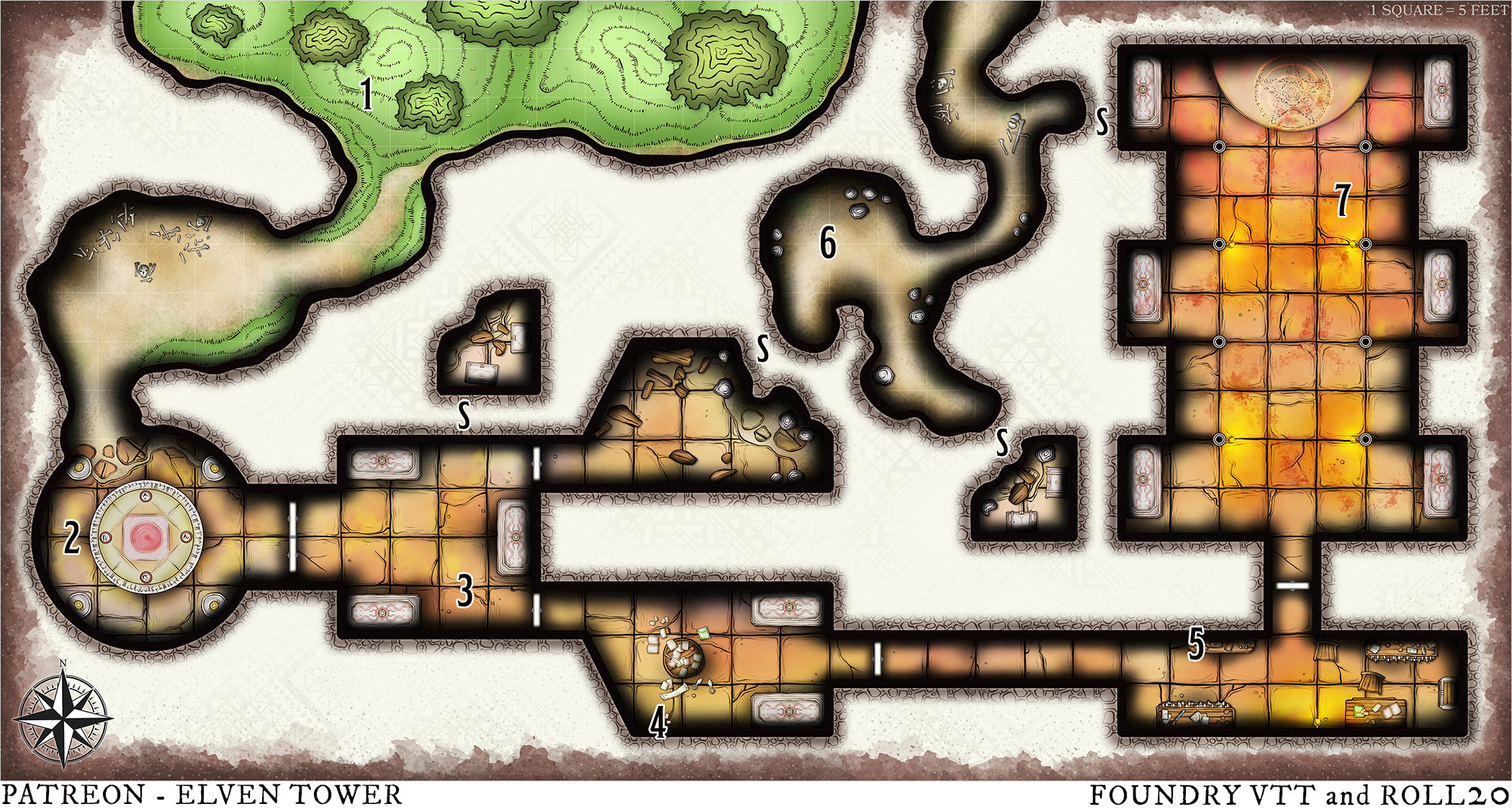