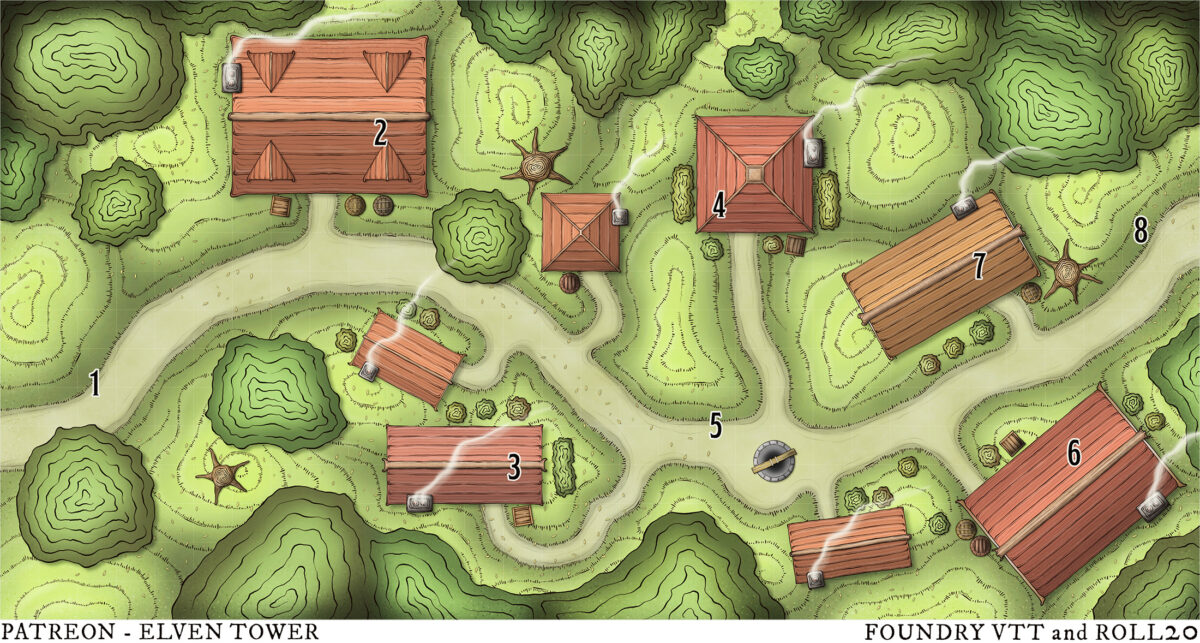 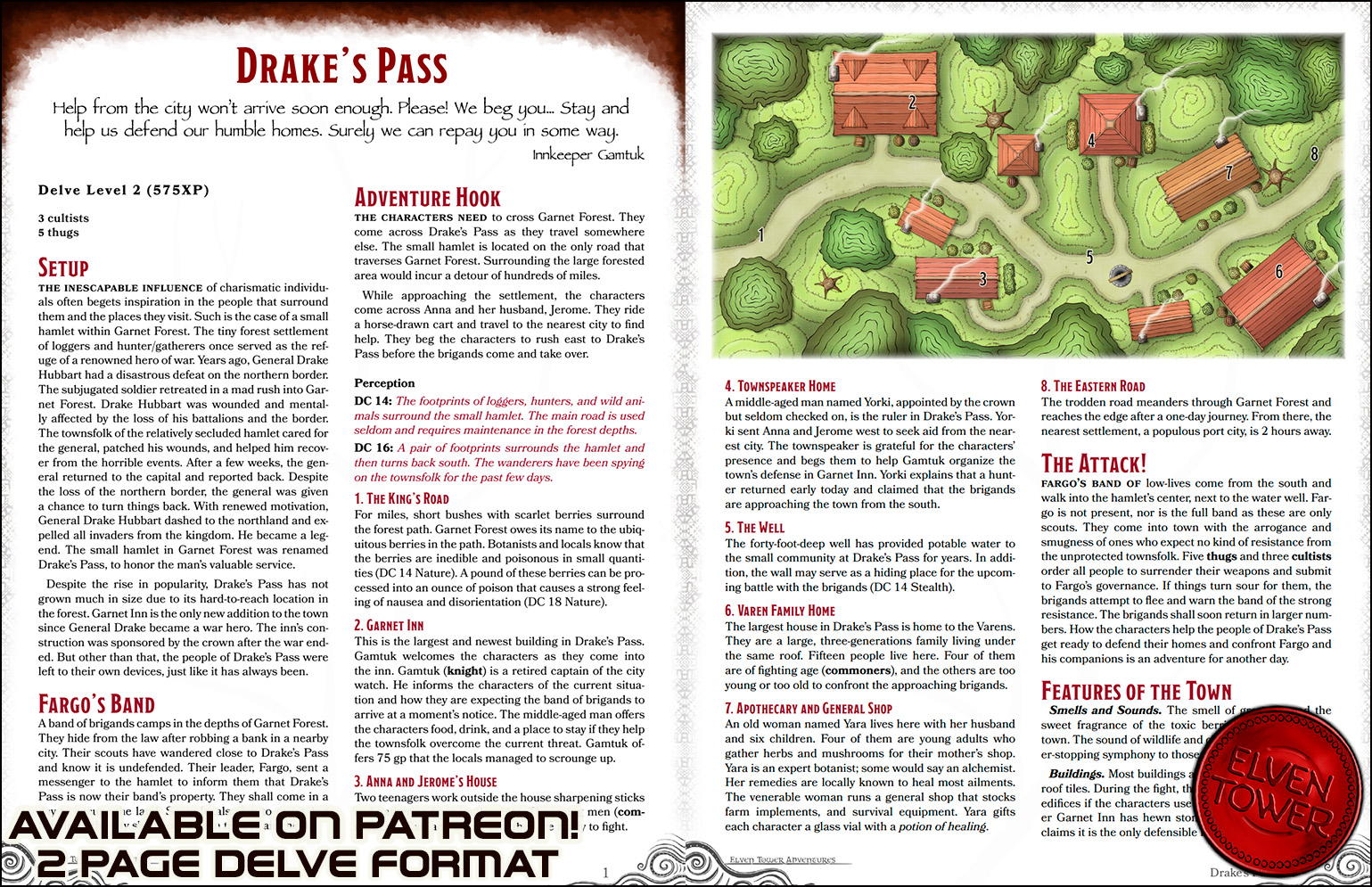 Help from the city won’t arrive soon enough. Please! We beg you… Stay and help us defend our humble homes. Surely we can repay you in some way.

The inescapable influence of charismatic individu­als often begets inspiration in the people that surround them and the places they visit. Such is the case of a small hamlet within Garnet Forest. The tiny forest settlement of loggers and hunter/gatherers once served as the ref­uge of a renowned hero of war. Years ago, General Drake Hubbart had a disastrous defeat on the northern border. The subjugated soldier retreated in a mad rush into Gar­net Forest. Drake Hubbart was wounded and mental­ly affected by the loss of his battalions and the border. The townsfolk of the relatively secluded hamlet cared for the general, patched his wounds, and helped him recov­er from the horrible events. After a few weeks, the gen­eral returned to the capital and reported back. Despite the loss of the northern border, the general was given a chance to turn things back. With renewed motivation, General Drake Hubbart dashed to the northland and ex­pelled all invaders from the kingdom. He became a leg­end. The small hamlet in Garnet Forest was renamed Drake’s Pass, to honor the man’s valuable service.

Despite the rise in popularity, Drake’s Pass has not grown much in size due to its hard-to-reach location in the forest. Garnet Inn is the only new addition to the town since General Drake became a war hero. The inn’s con­struction was sponsored by the crown after the war end­ed. But other than that, the people of Drake’s Pass were left to their own devices, just like it has always been.

A band of brigands camps in the depths of Garnet Forest. They hide from the law after robbing a bank in a nearby city. Their scouts have wandered close to Drake’s Pass and know it is undefended. Their leader, Fargo, sent a messenger to the hamlet to inform them that Drake’s Pass is now their band’s property. They shall come in a day to occupy the land. Some locals plan to resist, but help from the city shall not come in time to aid them.

The characters need to cross Garnet Forest. They come across Drake’s Pass as they travel somewhere else. The small hamlet is located on the only road that traverses Garnet Forest. Surrounding the large forested area would incur a detour of hundreds of miles.

While approaching the settlement, the characters come across Anna and her husband, Jerome. They ride a horse-drawn cart and travel to the nearest city to find help. They beg the characters to rush east to Drake’s Pass before the brigands come and take over.

DC 14: The footprints of loggers, hunters, and wild ani­mals surround the small hamlet. The main road is used seldom and requires maintenance in the forest depths.

DC 16: A pair of footprints surrounds the hamlet and then turns back south. The wanderers have been spying on the townsfolk for the past few days.

For miles, short bushes with scarlet berries surround the forest path. Garnet Forest owes its name to the ubiq­uitous berries in the path. Botanists and locals know that the berries are inedible and poisonous in small quanti­ties (DC 14 Nature). A pound of these berries can be pro­cessed into an ounce of poison that causes a strong feel­ing of nausea and disorientation (DC 18 Nature).

This is the largest and newest building in Drake’s Pass. Gamtuk welcomes the characters as they come into the inn. Gamtuk (knight) is a retired captain of the city watch. He informs the characters of the current situa­tion and how they are expecting the band of brigands to arrive at a moment’s notice. The middle-aged man offers the characters food, drink, and a place to stay if they help the townsfolk overcome the current threat. Gamtuk of­fers 75 gp that the locals managed to scrounge up.

Two teenagers work outside the house sharpening sticks and gathering farm implements. The young men (com­moners), Carl and Dan, claim they are ready to fight.

A middle-aged man named Yorki, appointed by the crown but seldom checked on, is the ruler in Drake’s Pass. Yor­ki sent Anna and Jerome west to seek aid from the near­est city. The townspeaker is grateful for the characters’ presence and begs them to help Gamtuk organize the town’s defense in Garnet Inn. Yorki explains that a hunt­er returned early today and claimed that the brigands are approaching the town from the south.

The forty-foot-deep well has provided potable water to the small community at Drake’s Pass for years. In addi­tion, the wall may serve as a hiding place for the upcom­ing battle with the brigands (DC 14 Stealth).

The largest house in Drake’s Pass is home to the Varens. They are a large, three-generations family living under the same roof. Fifteen people live here. Four of them are of fighting age (commoners), and the others are too young or too old to confront the approaching brigands.

An old woman named Yara lives here with her husband and six children. Four of them are young adults who gather herbs and mushrooms for their mother’s shop. Yara is an expert botanist; some would say an alchemist. Her remedies are locally known to heal most ailments. The venerable woman runs a general shop that stocks farm implements, and survival equipment. Yara gifts each character a glass vial with a potion of healing.

The trodden road meanders through Garnet Forest and reaches the edge after a one-day journey. From there, the nearest settlement, a populous port city, is 2 hours away.

Fargo’s band of low-lives come from the south and walk into the hamlet’s center, next to the water well. Far­go is not present, nor is the full band as these are only scouts. They come into town with the arrogance and smugness of ones who expect no kind of resistance from the unprotected townsfolk. Five thugs and three cultists order all people to surrender their weapons and submit to Fargo’s governance. If things turn sour for them, the brigands attempt to flee and warn the band of the strong resistance. The brigands shall soon return in larger num­bers. How the characters help the people of Drake’s Pass get ready to defend their homes and confront Fargo and his companions is an adventure for another day.

Features of the Town

Smells and Sounds. The smell of greenery and the sweet fragrance of the toxic berries impregnates the town. The sound of wildlife and chirping insects is a nev­er-stopping symphony to those able to appreciate it.

Buildings. Most buildings are made of wood with clay roof tiles. During the fight, the brigands may burn these edifices if the characters use them for hiding. The new­er Garnet Inn has hewn stone walls. Gamtuk (area 2) claims it is the only defensible location in Drake’s Pass. 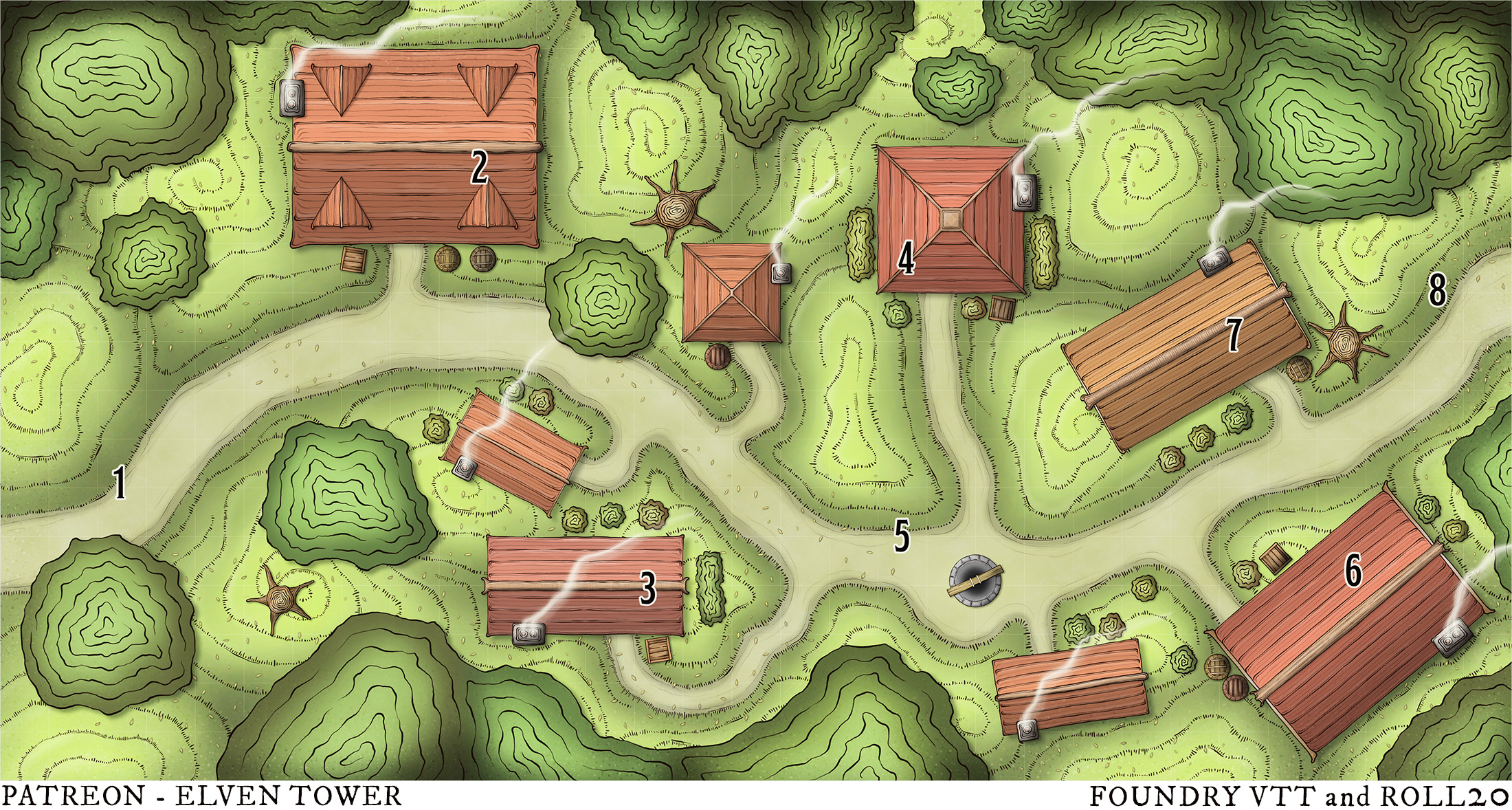