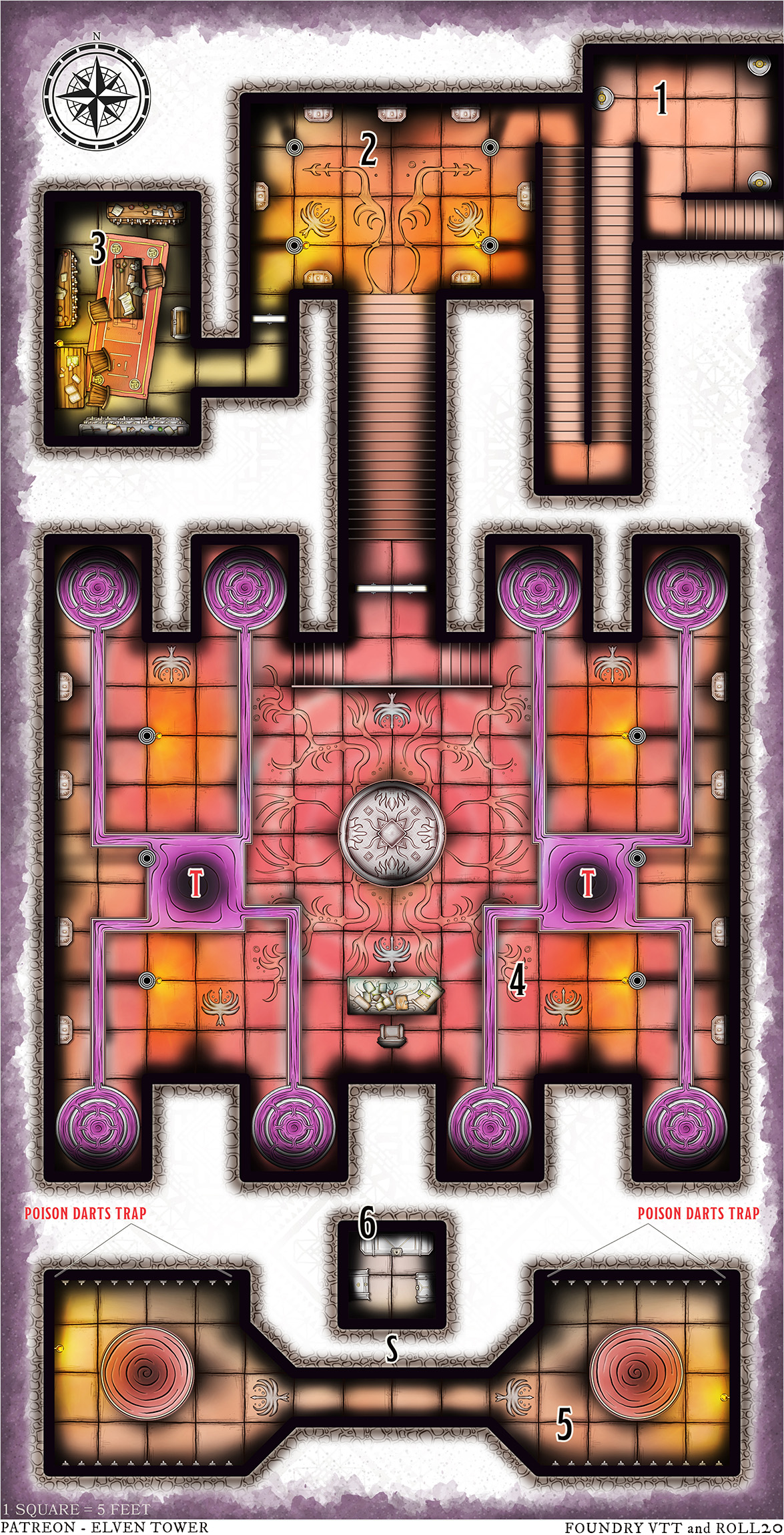 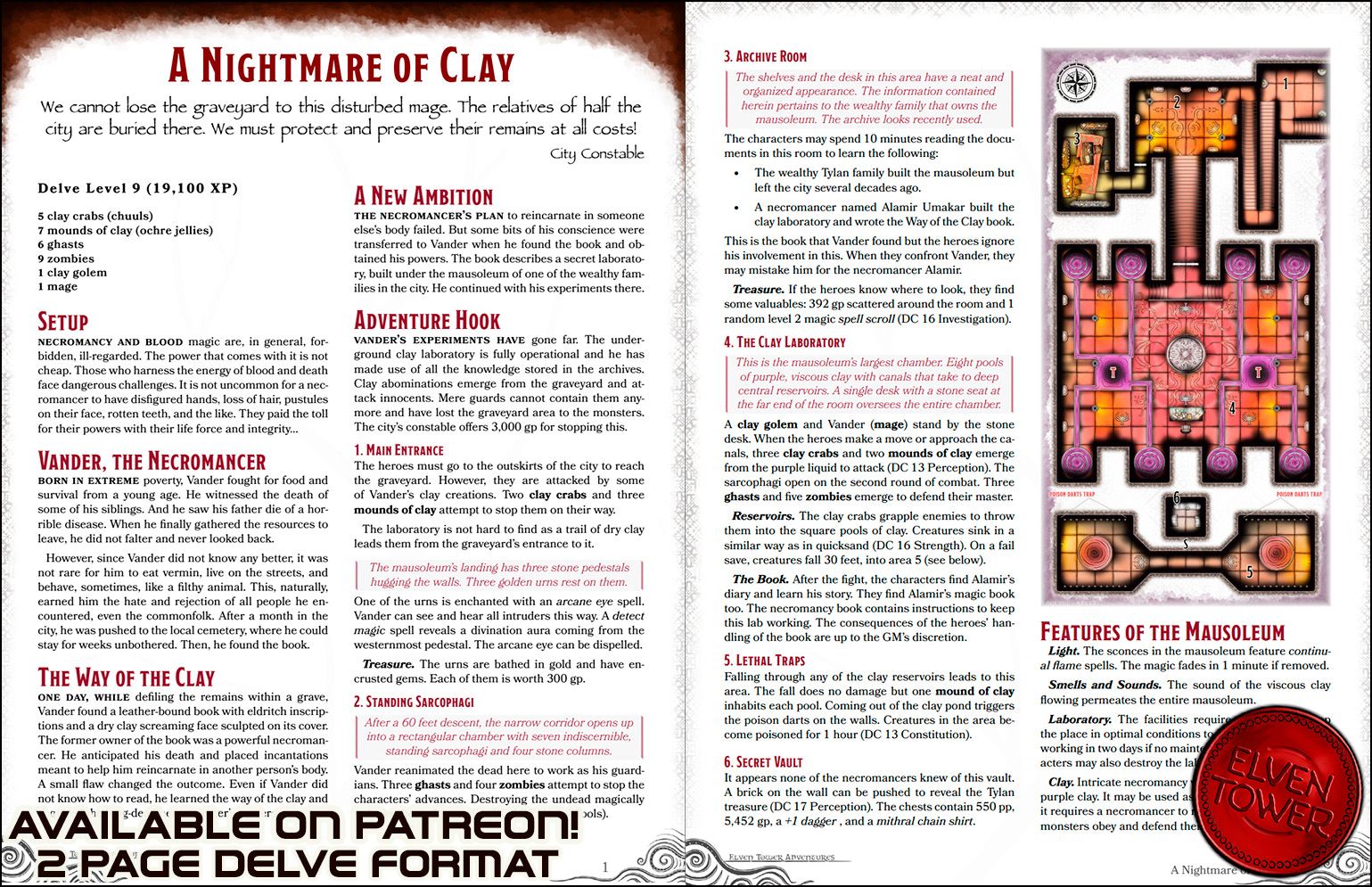 We cannot lose the graveyard to this disturbed mage. The relatives of half the city are buried there. We must protect and preserve their remains at all costs!

Necromancy and blood magic are, in general, for­bidden, ill-regarded. The power that comes with it is not cheap. Those who harness the energy of blood and death face dangerous challenges. It is not uncommon for a nec­romancer to have disfigured hands, loss of hair, pustules on their face, rotten teeth, and the like. They paid the toll for their powers with their life force and integrity…

Born in extreme poverty, Vander fought for food and survival from a young age. He witnessed the death of some of his siblings. And he saw his father die of a hor­rible disease. When he finally gathered the resources to leave, he did not falter and never looked back.

However, since Vander did not know any better, it was not rare for him to eat vermin, live on the streets, and behave, sometimes, like a filthy animal. This, naturally, earned him the hate and rejection of all people he en­countered, even the commonfolk. After a month in the city, he was pushed to the local cemetery, where he could stay for weeks unbothered. Then, he found the book.

The Way of the Clay

One day, while defiling the remains within a grave, Vander found a leather-bound book with eldritch inscrip­tions and a dry clay screaming face sculpted on its cover. The former owner of the book was a powerful necroman­cer. He anticipated his death and placed incantations meant to help him reincarnate in another person’s body. A small flaw changed the outcome. Even if Vander did not know how to read, he learned the way of the clay and acquired the long-dead necromancer’s powers.

The necromancer’s plan to reincarnate in someone else’s body failed. But some bits of his conscience were transferred to Vander when he found the book and ob­tained his powers. The book describes a secret laborato­ry, built under the mausoleum of one of the wealthy fam­ilies in the city. He continued with his experiments there.

Vander’s experiments have gone far. The under­ground clay laboratory is fully operational and he has made use of all the knowledge stored in the archives. Clay abominations emerge from the graveyard and at­tack innocents. Mere guards cannot contain them any­more and have lost the graveyard area to the monsters. The city’s constable offers 3,000 gp for stopping this.

The heroes must go to the outskirts of the city to reach the graveyard. However, they are attacked by some of Vander’s clay creations. Two clay crabs and three mounds of clay attempt to stop them on their way.

The laboratory is not hard to find as a trail of dry clay leads them from the graveyard’s entrance to it.

The mausoleum’s landing has three stone pedestals hugging the walls. Three golden urns rest on them.

One of the urns is enchanted with an arcane eye spell. Vander can see and hear all intruders this way. A detect magic spell reveals a divination aura coming from the westernmost pedestal. The arcane eye can be dispelled.

Treasure. The urns are bathed in gold and have en­crusted gems. Each of them is worth 300 gp.

After a 60 feet descent, the narrow corridor opens up into a rectangular chamber with seven indiscernible, standing sarcophagi and four stone columns.

The shelves and the desk in this area have a neat and organized appearance. The information contained herein pertains to the wealthy family that owns the mausoleum. The archive looks recently used.

The characters may spend 10 minutes reading the docu­ments in this room to learn the following:

This is the book that Vander found but the heroes ignore his involvement in this. When they confront Vander, they may mistake him for the necromancer Alamir.

Treasure. If the heroes know where to look, they find some valuables: 392 gp scattered around the room and 1 random level 2 magic spell scroll (DC 16 Investigation).

This is the mausoleum’s largest chamber. Eight pools of purple, viscous clay with canals that take to deep central reservoirs. A single desk with a stone seat at the far end of the room oversees the entire chamber.

A clay golem and Vander (mage) stand by the stone desk. When the heroes make a move or approach the ca­nals, three clay crabs and two mounds of clay emerge from the purple liquid to attack (DC 13 Perception). The sarcophagi open on the second round of combat. Three ghasts and five zombies emerge to defend their master.

Reservoirs. The clay crabs grapple enemies to throw them into the square pools of clay. Creatures sink in a similar way as in quicksand (DC 16 Strength). On a fail save, creatures fall 30 feet, into area 5 (see below).

The Book. After the fight, the characters find Alamir’s diary and learn his story. They find Alamir’s magic book too. The necromancy book contains instructions to keep this lab working. The consequences of the heroes’ han­dling of the book are up to the GM’s discretion.

Falling through any of the clay reservoirs leads to this area. The fall does no damage but one mound of clay inhabits each pool. Coming out of the clay pond triggers the poison darts on the walls. Creatures in the area be­come poisoned for 1 hour (DC 13 Constitution).

It appears none of the necromancers knew of this vault. A brick on the wall can be pushed to reveal the Tylan treasure (DC 17 Perception). The chests contain 550 pp, 5,452 gp, a +1 dagger , and a mithral chain shirt.

Smells and Sounds. The sound of the viscous clay flowing permeates the entire mausoleum.

Laboratory. The facilities require someone to keep the place in optimal conditions to keep working. It stops working in two days if no maintenance is done. The char­acters may also destroy the laboratory if they wish.

Clay. Intricate necromancy was employed to create the purple clay. It may be used as an arcane component but it requires a necromancer to maintain it stable. The clay monsters obey and defend their master until slain.