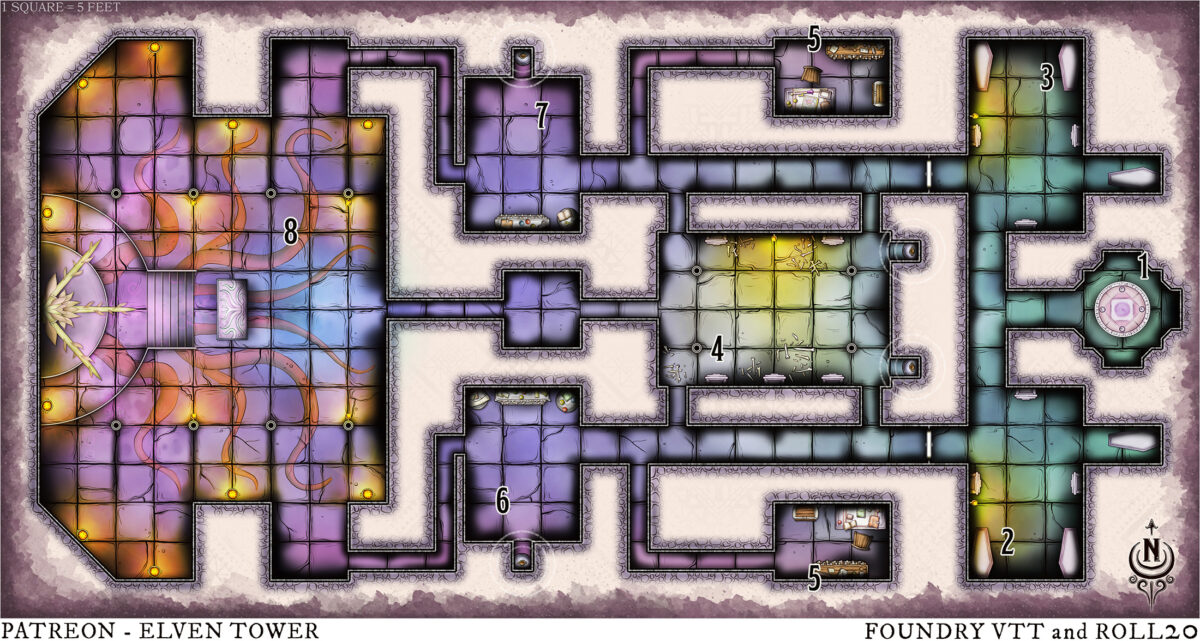 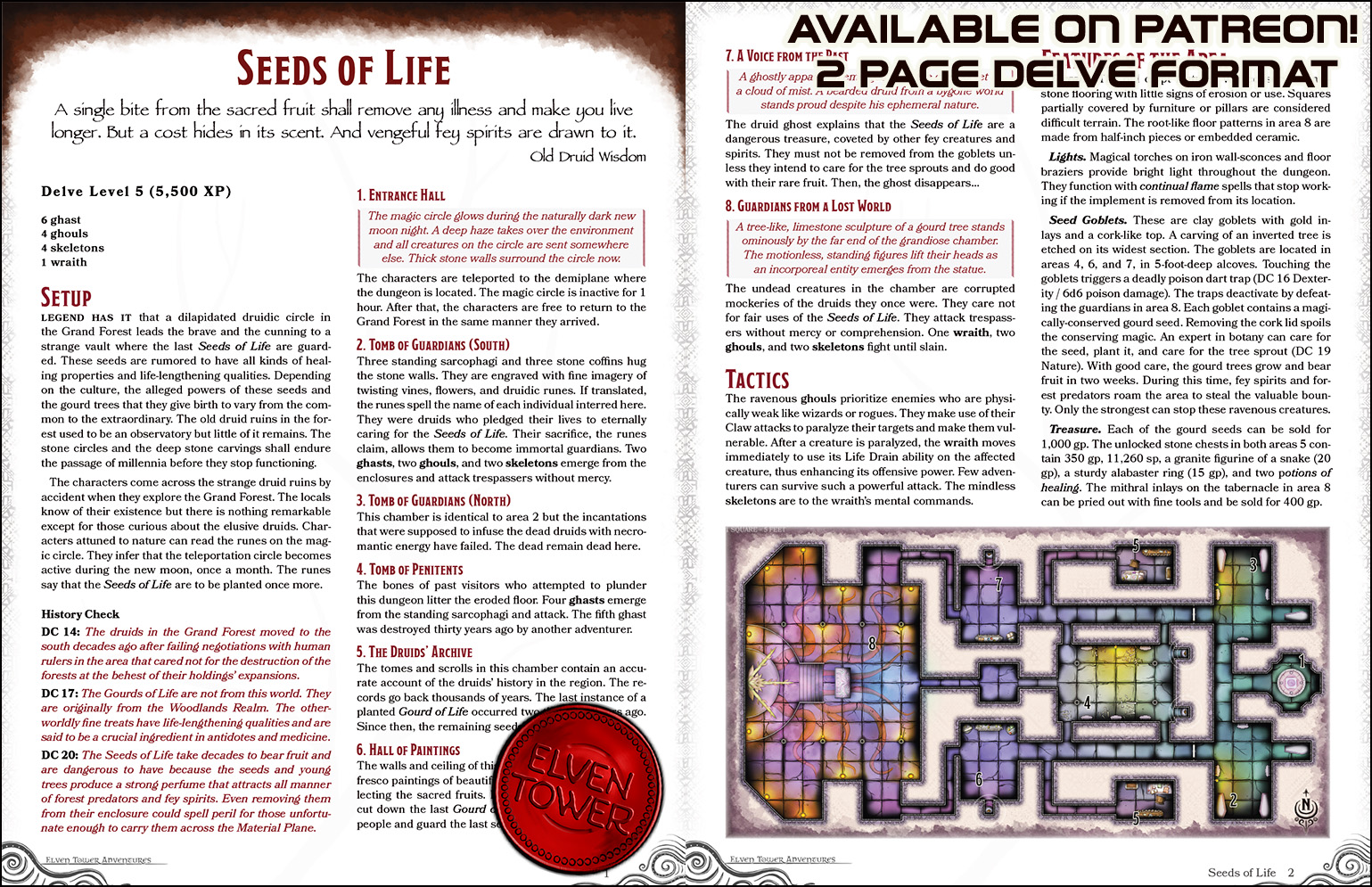 A single bite from the sacred fruit shall remove any illness and make you live longer. But a cost hides in its scent. And vengeful fey spirits are drawn to it.

Legend has it that a dilapidated druidic circle in the Grand Forest leads the brave and the cunning to a strange vault where the last Seeds of Life are guard­ed. These seeds are rumored to have all kinds of heal­ing properties and life-lengthening qualities. Depending on the culture, the alleged powers of these seeds and the gourd trees that they give birth to vary from the com­mon to the extraordinary. The old druid ruins in the for­est used to be an observatory but little of it remains. The stone circles and the deep stone carvings shall endure the passage of millennia before they stop functioning.

The characters come across the strange druid ruins by accident when they explore the Grand Forest. The locals know of their existence but there is nothing remarkable except for those curious about the elusive druids. Char­acters attuned to nature can read the runes on the mag­ic circle. They infer that the teleportation circle becomes active during the new moon, once a month. The runes say that the Seeds of Life are to be planted once more.

DC 14: The druids in the Grand Forest moved to the south decades ago after failing negotiations with human rulers in the area that cared not for the destruction of the forests at the behest of their holdings’ expansions.

DC 17: The Gourds of Life are not from this world. They are originally from the Woodlands Realm. The other­worldly fine treats have life-lengthening qualities and are said to be a crucial ingredient in antidotes and medicine.

DC 20: The Seeds of Life take decades to bear fruit and are dangerous to have because the seeds and young trees produce a strong perfume that attracts all manner of forest predators and fey spirits. Even removing them from their enclosure could spell peril for those unfortu­nate enough to carry them across the Material Plane.

The magic circle glows during the naturally dark new moon night. A deep haze takes over the environment and all creatures on the circle are sent somewhere else. Thick stone walls surround the circle now.

The characters are teleported to the demiplane where the dungeon is located. The magic circle is inactive for 1 hour. After that, the characters are free to return to the Grand Forest in the same manner they arrived.

Three standing sarcophagi and three stone coffins hug the stone walls. They are engraved with fine imagery of twisting vines, flowers, and druidic runes. If translated, the runes spell the name of each individual interred here. They were druids who pledged their lives to eternally caring for the Seeds of Life. Their sacrifice, the runes claim, allows them to become immortal guardians. Two ghasts, two ghouls, and two skeletons emerge from the enclosures and attack trespassers without mercy.

This chamber is identical to area 2 but the incantations that were supposed to infuse the dead druids with necro­mantic energy have failed. The dead remain dead here.

The bones of past visitors who attempted to plunder this dungeon litter the eroded floor. Four ghasts emerge from the standing sarcophagi and attack. The fifth ghast was destroyed thirty years ago by another adventurer.

The tomes and scrolls in this chamber contain an accu­rate account of the druids’ history in the region. The re­cords go back thousands of years. The last instance of a planted Gourd of Life occurred two thousand years ago. Since then, the remaining seeds are guarded here.

The walls and ceiling of this chamber are decorated with fresco paintings of beautiful gourd trees and people col­lecting the sacred fruits. In the largest one, the druids cut down the last Gourd of Life to keep it from greedy people and guard the last seeds in clay goblets.

7. A Voice from the Past

A ghostly apparition emerges from the clay goblet in a cloud of mist. A bearded druid from a bygone world stands proud despite his ephemeral nature.

The druid ghost explains that the Seeds of Life are a dangerous treasure, coveted by other fey creatures and spirits. They must not be removed from the goblets un­less they intend to care for the tree sprouts and do good with their rare fruit. Then, the ghost disappears…

8. Guardians from a Lost World

A tree-like, limestone sculpture of a gourd tree stands ominously by the far end of the grandiose chamber. The motionless, standing figures lift their heads as an incorporeal entity emerges from the statue.

The undead creatures in the chamber are corrupted mockeries of the druids they once were. They care not for fair uses of the Seeds of Life. They attack trespass­ers without mercy or comprehension. One wraith, two ghouls, and two skeletons fight until slain.

The ravenous ghouls prioritize enemies who are physi­cally weak like wizards or rogues. They make use of their Claw attacks to paralyze their targets and make them vul­nerable. After a creature is paralyzed, the wraith moves immediately to use its Life Drain ability on the affected creature, thus enhancing its offensive power. Few adven­turers can survive such a powerful attack. The mindless skeletons are to the wraith’s mental commands.

Terrain. The old crypt features well-conserved lime­stone flooring with little signs of erosion or use. Squares partially covered by furniture or pillars are considered difficult terrain. The root-like floor patterns in area 8 are made from half-inch pieces or embedded ceramic.

Lights. Magical torches on iron wall-sconces and floor braziers provide bright light throughout the dungeon. They function with continual flame spells that stop work­ing if the implement is removed from its location.

Seed Goblets. These are clay goblets with gold in­lays and a cork-like top. A carving of an inverted tree is etched on its widest section. The goblets are located in areas 4, 6, and 7, in 5-foot-deep alcoves. Touching the goblets triggers a deadly poison dart trap (DC 16 Dexter­ity / 6d6 poison damage). The traps deactivate by defeat­ing the guardians in area 8. Each goblet contains a magi­cally-conserved gourd seed. Removing the cork lid spoils the conserving magic. An expert in botany can care for the seed, plant it, and care for the tree sprout (DC 19 Nature). With good care, the gourd trees grow and bear fruit in two weeks. During this time, fey spirits and for­est predators roam the area to steal the valuable boun­ty. Only the strongest can stop these ravenous creatures. 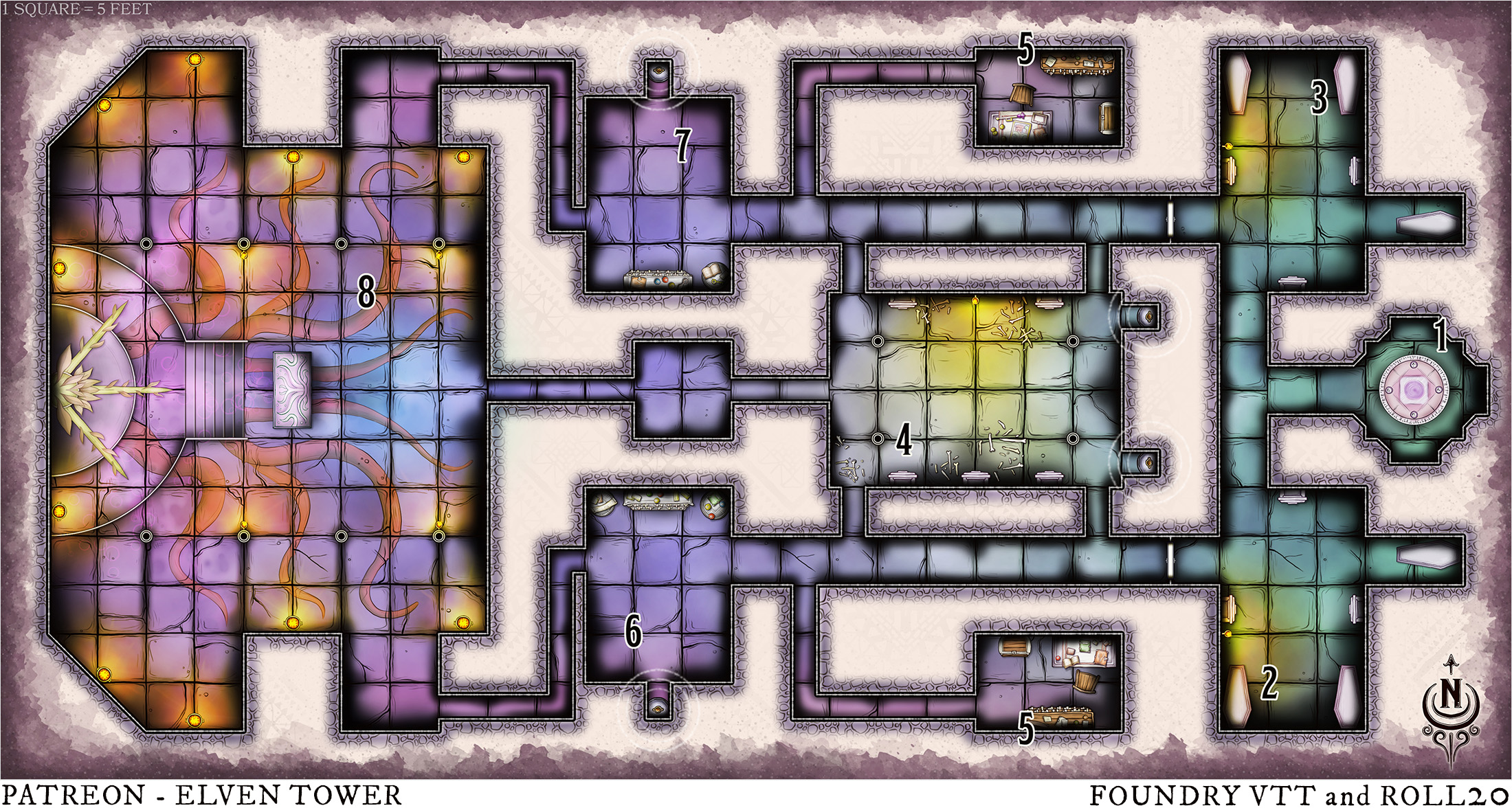