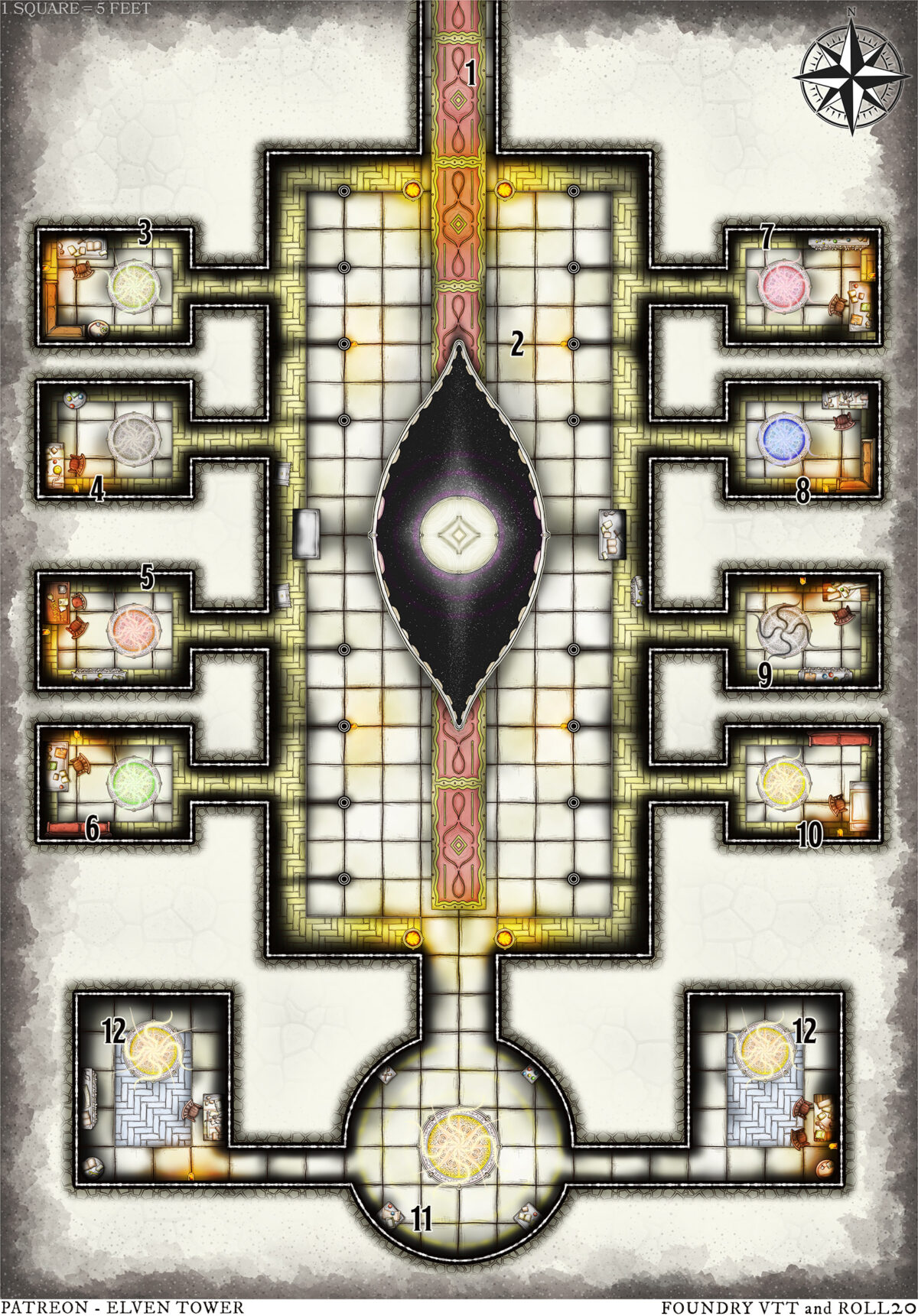 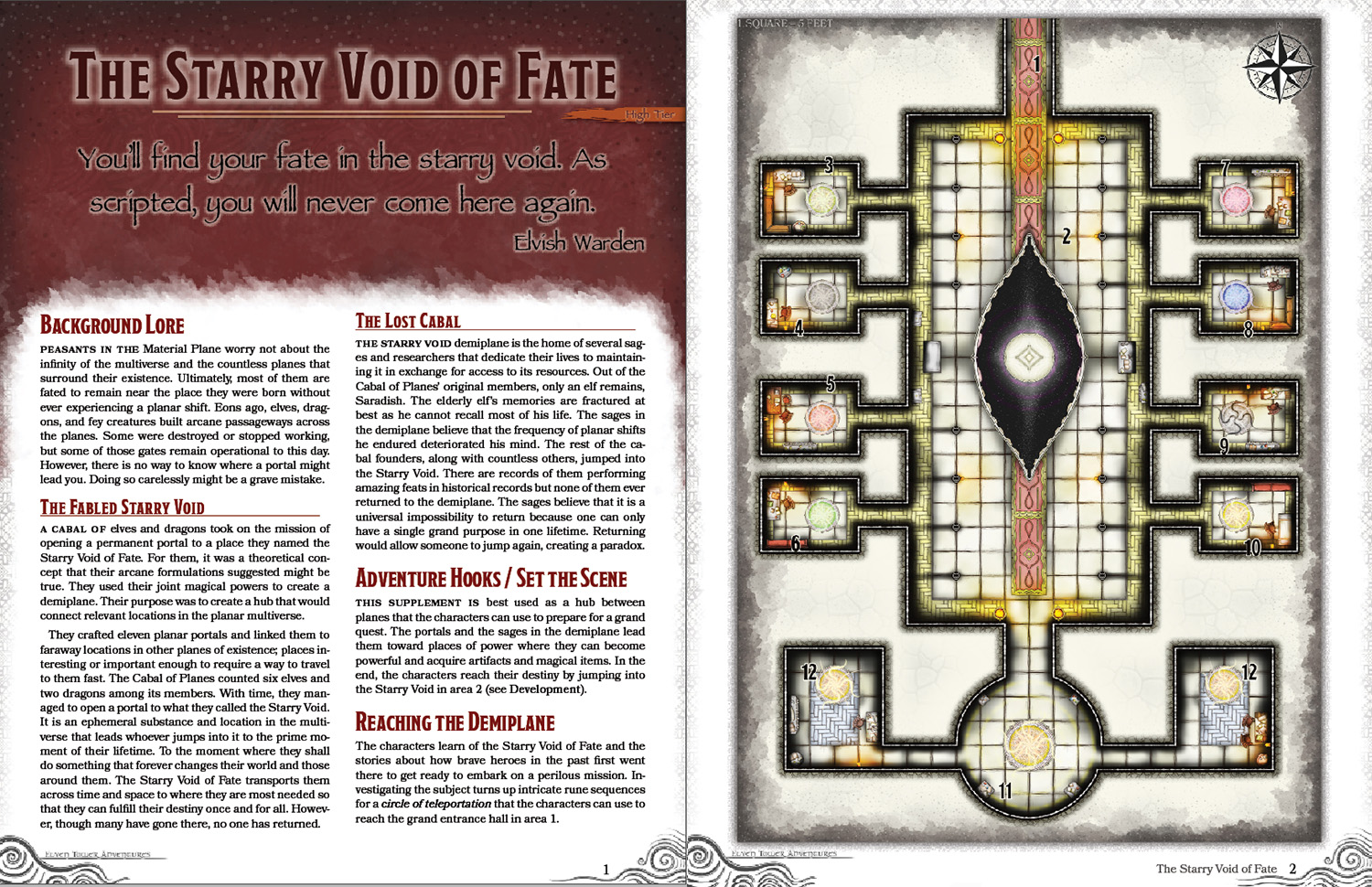 You may stare at your fate in the starry void. As scripted, you shall never come here again.

Peasants in the Material Plane worry not about the infinity of the multiverse and the countless planes that surround their existence. Ultimately, most of them are fated to remain near the place they were born without ever experiencing a planar shift. Eons ago, elves, drag­ons, and fey creatures built arcane passageways across the planes. Some were destroyed or stopped working, but some of those gates remain operational to this day. However, sometimes there is no way to know where a portal might go. Careless interaction is a grave mistake.

A cabal of elves and dragons took on the mission of opening a permanent portal to a place they named the Starry Void of Fate. For them, it was a theoretical con­cept that their arcane formulations suggested might be true. They used their joint magical powers to create a demiplane. Their purpose was to create a hub that would connect relevant locations in the planar multiverse.

They crafted eleven planar portals and linked them to faraway locations in other planes of existence; places in­teresting or important enough to require a way to travel to them fast. The Cabal of Planes counted twelve elves and four dragons among its members. With time, they managed to open a portal to what they called the Star­ry Void. It is an ephemeral substance and location in the multiverse that leads whoever jumps into it to the prime moment of their lifetime. To the moment where they shall do something that forever changes their world and those around them. The Starry Void of Fate transports them across time and space to where they are most needed so that they can fulfill their destiny once and for all. Howev­er, though many have gone there, no one has returned.

The Starry Void demiplane is the home of several sag­es and researchers that dedicate their lives to maintain­ing it in exchange for access to its resources. Out of the Cabal of Planes’ original members, only an elf remains, Saradish. The 3,500-year-old elf’s memories are frac­tured at best as he cannot recall most of his life. The sag­es in the demiplane believe that the frequency of planar shifts he endured deteriorated his mind. The rest of the cabal founders, along with countless others, jumped into the Starry Void. The records of them describe amazing feats in historical records but none of them ever returned to the demiplane. The sages believe that it is a universal impossibility to return because one can only have a sin­gle grand purpose in one lifetime. Returning, thus allow­ing someone to jump again, would create a paradox.

This supplement is best used as a hub between planes that the characters can use to prepare for a grand quest. The portals and the sages in the demiplane lead them toward places of power where they can become powerful and acquire artifacts and magical items. In the end, the characters reach their destiny by jumping into the Starry Void in area 2 (see Development).

The high-level party learns of the Starry Void of Fate and the stories about how brave heroes in the past first went there to get ready to embark on a perilous mis­sion. Investigating the subject turns up intricate rune se­quences for a plane shift spell that the characters can use to reach the grand entrance hall in area 1.

Features of the Demiplane

The following features correspond to the Starry Void of Fate’s demiplane, areas 1 through 12.

Atmosphere. The Starry Void in area 2 pulls light and sound into it, creating a palpable void in the air. This ef­fect causes a feeling of unease in most creatures.

Magical Blockade. A permanent anti-magic field per­meates the demiplane. Saradish, the remaining founder is immune to it but he hasn’t cast a spell in years. Some­times, in a bout of lucidity, the elf appoints a trusted sage as a new exception to the anti-magic field. At this time, only the sages in areas 6 and 10 can cast spells.

When a creature uses the intricate rune sequence for a teleportation spell, they experience a moment of synes­thesia (a criss-cross of the senses) before finding them­selves walking through a great hallway. The entrance hall has a 30-foot-tall, arched, ceiling with detailed archi­tecture and fresco paintings of strange landscapes.

The creatures appear 100 feet from area 2. To the north, the hallway appears to continue as far as the eye can see. This is an infinite hallway that leads nowhere. There are several framed portraits hanging on the walls. They depict twelve elves and four dragons. The elves wear purple tunics and the dragons brandish pieces of jewelry embedded on their scales. A well-informed histo­rian knows that they form the Cabal of Planes, they are responsible for creating this demiplane (DC 19 History).

The largest chamber in the demiplane houses the eye-shaped opening into the Starry Void of Fate. Two rows of eight pillars flank the endless well and hold an arched ceiling with elaborate arches and convoluted architec­tural features. A pearl-white sphere floats just above the starry abyss. The sphere rotates slowly and reflects close-by individuals on its glossy surface. The sages claim that looking into those reflections might yield some insight into what awaits those who jump into the Starry Void.

A snakefolk sage named Diri’Talhis stands by the void and warns visitors against jumping into it. The sage claims that ill-prepared individuals taking the plunge might just find themselves in the jaws of death. Still, she claims that even those unprepared may end up perform­ing great deeds. It is all up to fate. Diri’Talhis speaks slowly and in riddles, but tries to be helpful to others.

3. Gate to the Woodlands

The portal in this chamber leads to a location in the Woodlands forest where a council of dryads lives. Meren, the elf sage here claims that the dryads possess knowl­edge that dates back to the birth of existence. They may answer questions that no one else can.

4. Gate to the Shadows

This portal leads to a deep cavern network in the Shad­ow Realm. The records say that a powerful magical aura can be detected there but the indigenous, mutated, cav­ern denizens have deterred any exploration attempt. The sages believe the aura belongs to a draconic artifact.

5. Gate to the Endless Hells

This gate has only been used twice in the past. It leads to layer 344 of the hellish planes. The destination is hot enough to melt iron; few individuals possess the mag­ic protections to explore it. The only record says that a brass castle is located five miles from the entry point.

6. Gate of the Archfey Court

A drow sage named Il’Vadhiss and Saradish, the elderly founder, work here. The gate leads directly to an archfey court in the Woodlands Realm. It is the court of a venera­ble fey entity that embodies the power of the storms and wind. Il’Vadhiss is a folk hero of her people and claims to know that her ultimate fate is to save her home city from an incoming invasion. She is ready to jump into the Star­ry Void. She wishes to return to the demiplane too, some­thing that the sages insist is not possible. She wants to make a deal with the archfey to see if they can help with her predicament. She is looking for companions.

7. Gate to the Great Mountain

The gate leads to a location in the Material Plane near a grand volcano’s crater. The records say that the locals made gruesome sacrifices in the fiery place.

8. Gate to the Endless Depths

This portal leads to the ocean in the Material Plane. The entry point is 30,000 feet deep and requires spe­cial preparation because of the overwhelming pressure. Countless shipwrecks rest within three miles of the gate.

9. Gate to the Veins of the Earth

The portal leads to a cavern thousands of feet under the Material Plane’s surface. Vadanni, a gnome sage, claims that the cavern is dangerous and constantly changing from the sudden seismic activity in the area.

This gate leads to one of the higher planes of existence. The one many know as the Radiant Fields. It is the home of an almighty entity that most people in the Material Plane know as the God of the Sun. It is believed that fol­lowers of that god reach the Radiant Fields after they die. Brock Amin, a satyr sage in the area, suggests that those claims are unsubstantiated. Still, the kind satyr warns those planning to use the gate to be ready as the inhabi­tants of the Radiant Fields do not suffer fools. Their law system is fast, straightforward, and unmerciful.

11. The Gate of Surprise

The records in this chamber detail that the gate does not have a single destination. Instead, there is a log of seven­teen different locations that the gate randomly connects to. Some sages say that it is not random and that the cho­sen destination has some relevance to the creature’s ulti­mate fate. But not all agree with this hypothesis.

A capable spellcaster can configure any of these portals to function as a planar shift spell that allows the user to open a door to any place in their plane of origin. It is the only means to abandon the demiplane to a custom des­tination. In addition, spellcasters standing on the circle bypass the demiplane’s magical blockade.

Stepping into the Void

The characters gain use of the Starry Void demi­plane and use its resources to empower themselves for the future. Diri’Talhis, the snakefolk sage, recommends speaking to other sages and visiting some of the oth­er portals’ destinations to become stronger before con­sidering the Starry Void. The other plane gates lead to strange locations in the multiverse that are meant to strengthen and prepare them to withstand anything they find on their paths. All sages in the demiplane are eager to hear the story and make recommendations on what gates to visit based on their needs. The sages have a scholarly curiosity about all visitors and their quests and wish to see them succeed so that they can unearth more information about the Starry Void of Fate’s nature.

When the characters approach the Starry Void of Fate they get closer to the campaign’s end. This requires preparation on the part of the GM as they must plan ahead for the party’s end-of-campaign quest. Due to the nature of the Starry Void of Fate, when the characters take the plunge, they are transported to wherever they shall fulfill their final mission. They appear before their archenemy’s lair, they find an obscure dungeon where an item of great power is located, or they are transported to somewhere they are needed the most. The exact nature depends on the campaign and the great evil that threat­ens the existence of the characters and their world. 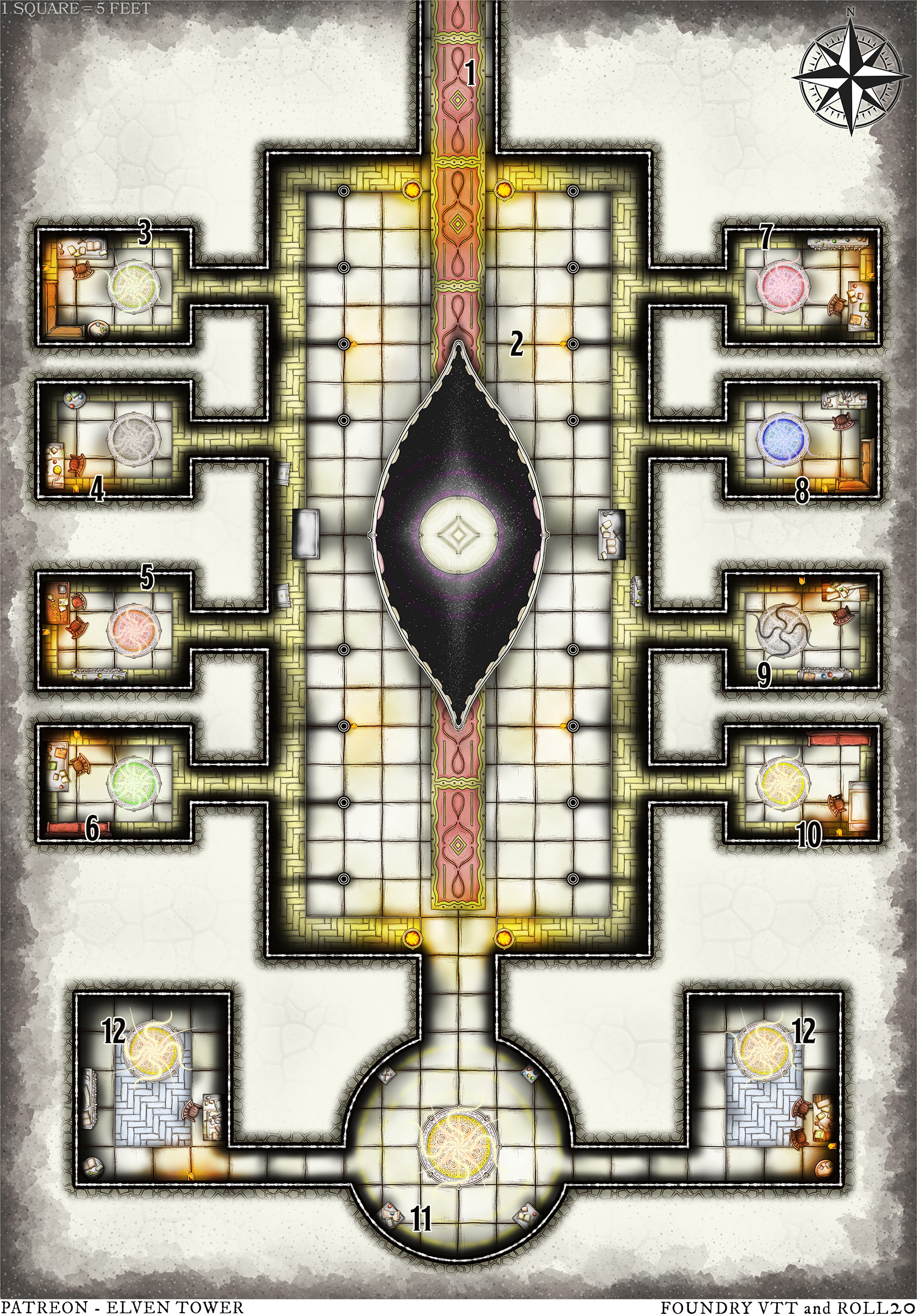