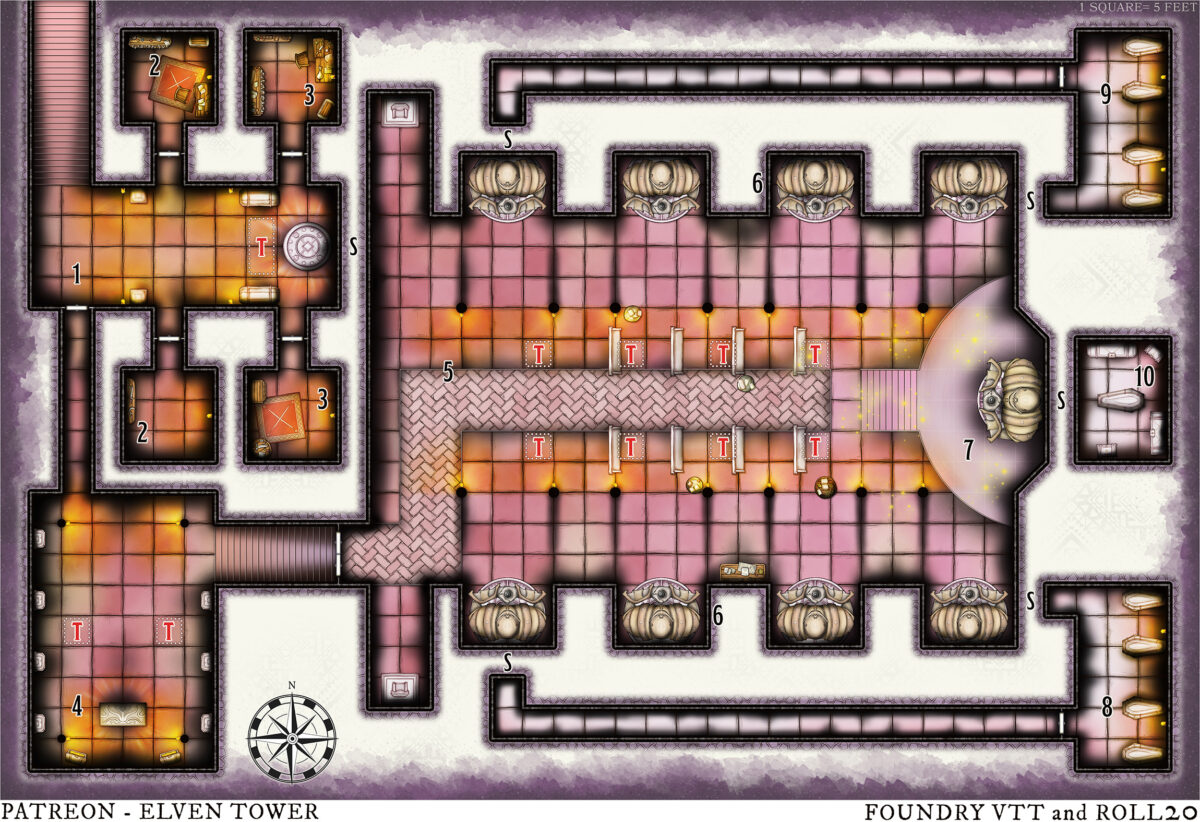 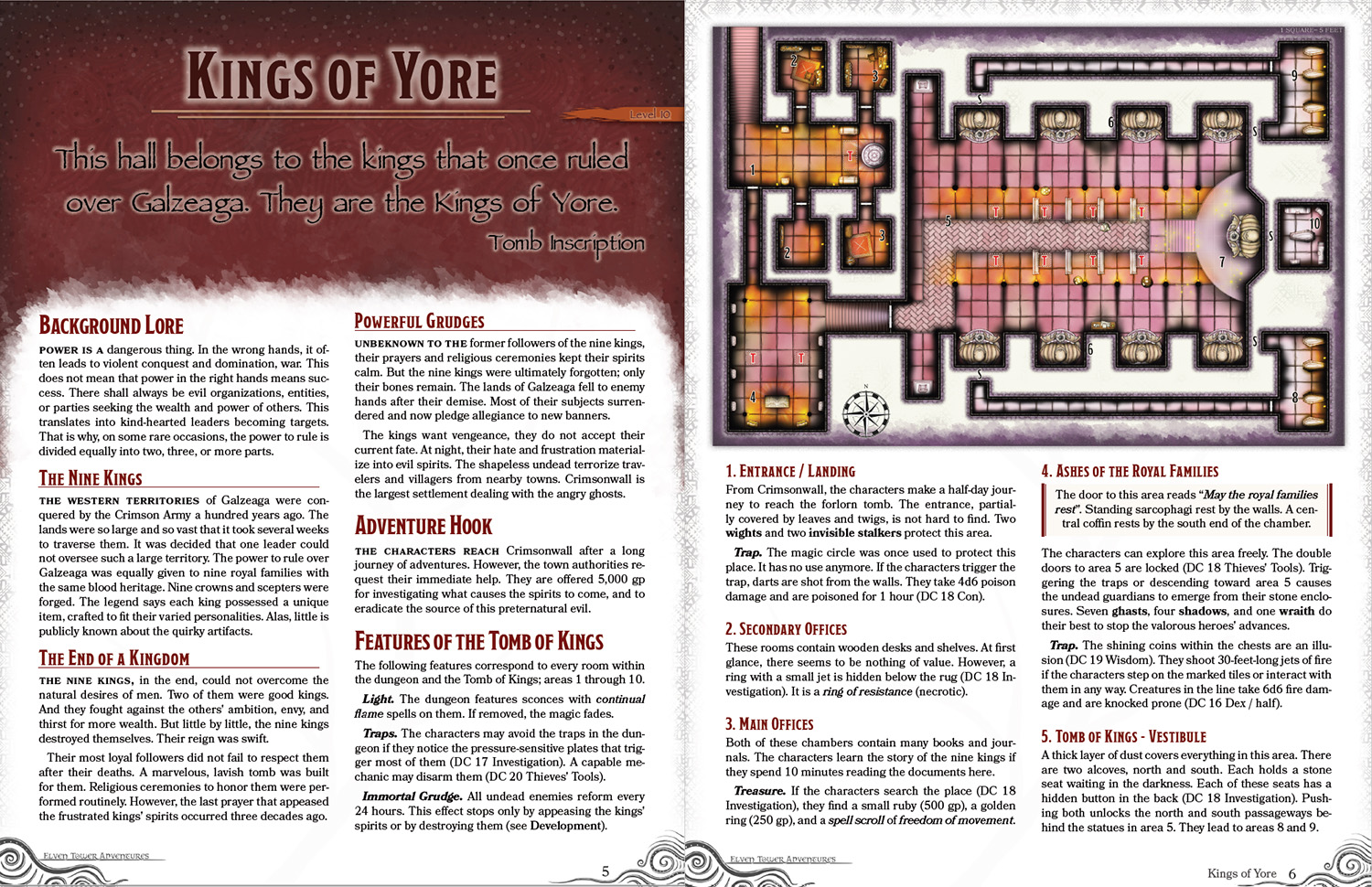 This hall belongs to the kings that once ruled over Galzeaga. They are the Kings of Yore.

Power is a dangerous thing. In the wrong hands, it of­ten leads to violent conquest and domination, war. This does not mean that power in the right hands means suc­cess. There shall always be evil organizations, entities, or parties seeking the wealth and power of others. This translates into kind-hearted leaders becoming targets. That is why, on some rare occasions, the power to rule is divided equally into two, three, or more parts.

The Western Territories of Galzeaga were con­quered by the Crimson Army a hundred years ago. The lands were so large and so vast that it took several weeks to traverse them. It was decided that one leader could not oversee such a large territory. The power to rule over Galzeaga was equally given to nine royal families with the same blood heritage. Nine crowns and scepters were forged. The legend says each king possessed a unique item, crafted to fit their varied personalities. Alas, little is publicly known about the quirky artifacts.

The End of a Kingdom

The nine kings, in the end, could not overcome the natural desires of men. Two of them were good kings. And they fought against the others’ ambition, envy, and thirst for more wealth. But little by little, the nine kings destroyed themselves. Their reign was swift.

Their most loyal followers did not fail to respect them after their deaths. A marvelous, lavish tomb was built for them. Religious ceremonies to honor them were per­formed routinely. However, the last prayer that appeased the frustrated kings’ spirits occurred three decades ago.

Unbeknown to the former followers of the nine kings, their prayers and religious ceremonies kept their spirits calm. But the nine kings were ultimately forgotten; only their bones remain. The lands of Galzeaga fell to enemy hands after their demise. Most of their subjects surren­dered and now pledge allegiance to new banners.

The kings want vengeance, they do not accept their current fate. At night, their hate and frustration material­ize into evil spirits. The shapeless undead terrorize trav­elers and villagers from nearby towns. Crimsonwall is the largest settlement dealing with the angry ghosts.

The characters reach Crimsonwall after a long journey of adventures. However, the town authorities re­quest their immediate help. They are offered 5,000 gp for investigating what causes the spirits to come, and to eradicate the source of this preternatural evil.

Features of the Tomb of Kings

The following features correspond to every room within the dungeon and the Tomb of Kings; areas 1 through 10.

Traps. The characters may avoid the traps in the dun­geon if they notice the pressure-sensitive plates that trig­ger most of them (DC 17 Investigation). A capable me­chanic may disarm them (DC 20 Thieves’ Tools).

Immortal Grudge. All undead enemies reform every 24 hours. This effect stops only by appeasing the kings’ spirits or by destroying them (see Development).

From Crimsonwall, the characters make a half-day jour­ney to reach the forlorn tomb. The entrance, partial­ly covered by leaves and twigs, is not hard to find. Two wights and two invisible stalkers protect this area.

Trap. The magic circle was once used to protect this place. It has no use anymore. If the characters trigger the trap, darts are shot from the walls. They take 4d6 poison damage and are poisoned for 1 hour (DC 18 Con).

These rooms contain wooden desks and shelves. At first glance, there seems to be nothing of value. However, a ring with a small jet is hidden below the rug (DC 18 In­vestigation). It is a ring of resistance (necrotic).

Both of these chambers contain many books and jour­nals. The characters learn the story of the nine kings if they spend 10 minutes reading the documents here.

Treasure. If the characters search the place (DC 18 Investigation), they find a small ruby (500 gp), a golden ring (250 gp), and a spell scroll of freedom of movement.

4. Ashes of the Royal Families

The door to this area reads “May the royal families rest”. Standing sarcophagi rest by the walls. A cen­tral coffin rests by the south end of the chamber.

The characters can explore this area freely. The double doors to area 5 are locked (DC 18 Thieves’ Tools). Trig­gering the traps or descending toward area 5 causes the undead guardians to emerge from their stone enclo­sures. Seven ghasts, four shadows, and one wraith do their best to stop the valorous heroes’ advances.

Trap. The shining coins within the chests are an illu­sion (DC 19 Wisdom). They shoot 30-feet-long jets of fire if the characters step on the marked tiles or interact with them in any way. Creatures in the line take 6d6 fire dam­age and are knocked prone (DC 16 Dex / half).

A thick layer of dust covers everything in this area. There are two alcoves, north and south. Each holds a stone seat waiting in the darkness. Each of these seats has a hidden button in the back (DC 18 Investigation). Push­ing both unlocks the north and south passageways be­hind the statues in area 5. They lead to areas 8 and 9.

6. Statues of the Kings

The walls of this large hall feature 15-foot-wide alcoves where eight statues stand impassive. The eastern end of the chamber holds the ninth of the king’s statues. The chamber’s marvelous architecture is a thing to behold.

Traps. Stepping on any of the marked floor tiles (see map) causes eight of the statues’ bases to open. An ar­mored wight comes out of each base. The eight warriors stand before the ninth king’s statue to protect him.

7. The Kings of Yore

The ninth king’s statue is identical to the others, yet, it seems larger, more prominent. An aura of great power comes from its interior. A magical shield (wall of force) protects it against any physical or magical damage.

Blocked Way. The characters cannot access the trea­sure chamber (area 10) until they visit both areas 8 and 9. A spectral voice whispers in their minds: “Find the kings, hear our words. Make the world remember us”.

Four of the nine kings’ remains are here. It is the first time someone visits them in such a long time. Grateful for this gesture, the kings’ ghosts appear before the char­acters, managing their anger, and speak. The four voices speak as one and say: “Respect our dead, our people, our lives. Do not pillage our tomb, and make others remem­ber us, visit us. Speak of our past and our lives. We were good kings. We just want to be remembered.”

The characters know this is not entirely true if they read the documents in area 3 or if they knew the story of the nine kings in Galzeaga already (DC 18 History).

Treasure. If the characters ignore the ghosts and open the sarcophagi, they find 8,000 gp worth of coins, small gems, silverware, fancy fabrics, robes, jewelry, and more.

Use the same description from area 8 for this area. The characters hear the ghosts’ wishes again here. The trea­sure here is similar to the one described in area 8.

The characters cannot enter this area until they listen to the kings’ ghosts in areas 8 and 9, and once they make a choice (see Development). If they choose to help the kings, they cannot take any of the treasure here.

Treasure. The king resting in the sarcophagi wears 5,000 gp worth of jewelry. A hoard of 10,000 gp worth of expensive fabrics, spices, and silverware lies inside the chests. A rod of alertness rests on top of a chest.

The characters do not pillage the tomb and pay re­spect to the kings. They ask Crimsonwall to remember the kings who once ruled over Galzeaga. And to visit their tombs from time to time. If they succeed, the dead finally rest. The characters are paid the agreed-upon amount.

The Past is Dead

The characters ignore what the kings want or feel. They know the truth about their greed. They loot areas 8 and 9. Back at the main hall (area 7), the nine kings’ anger takes the form of an erinyes devil. It defends the kings’ vault along with one wraith and two shadows. If the wights in area 6 did not fight before, they emerge from their enclosures now as well. The incorporeal un­dead reform after one round until the erinyes is defeated. 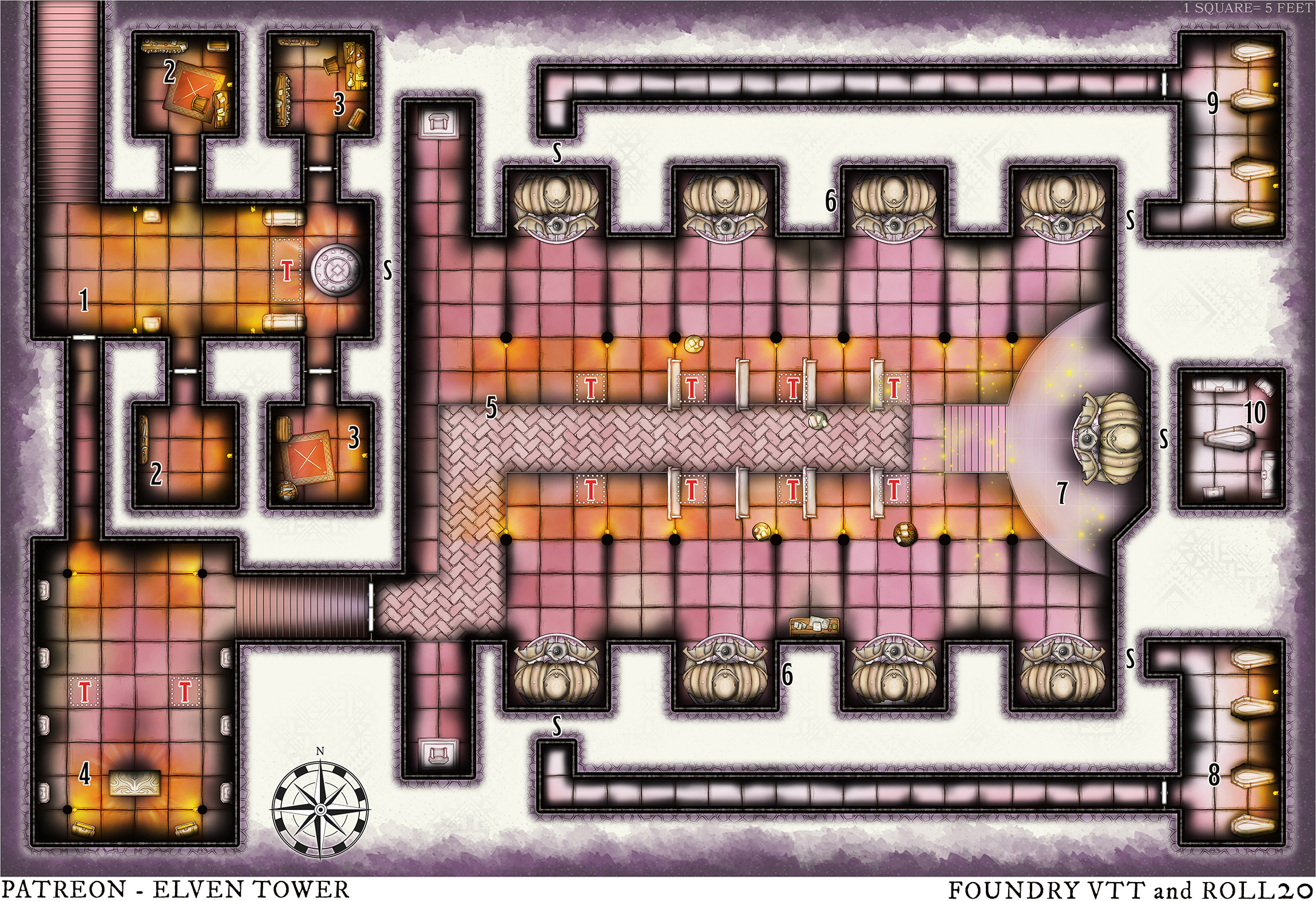