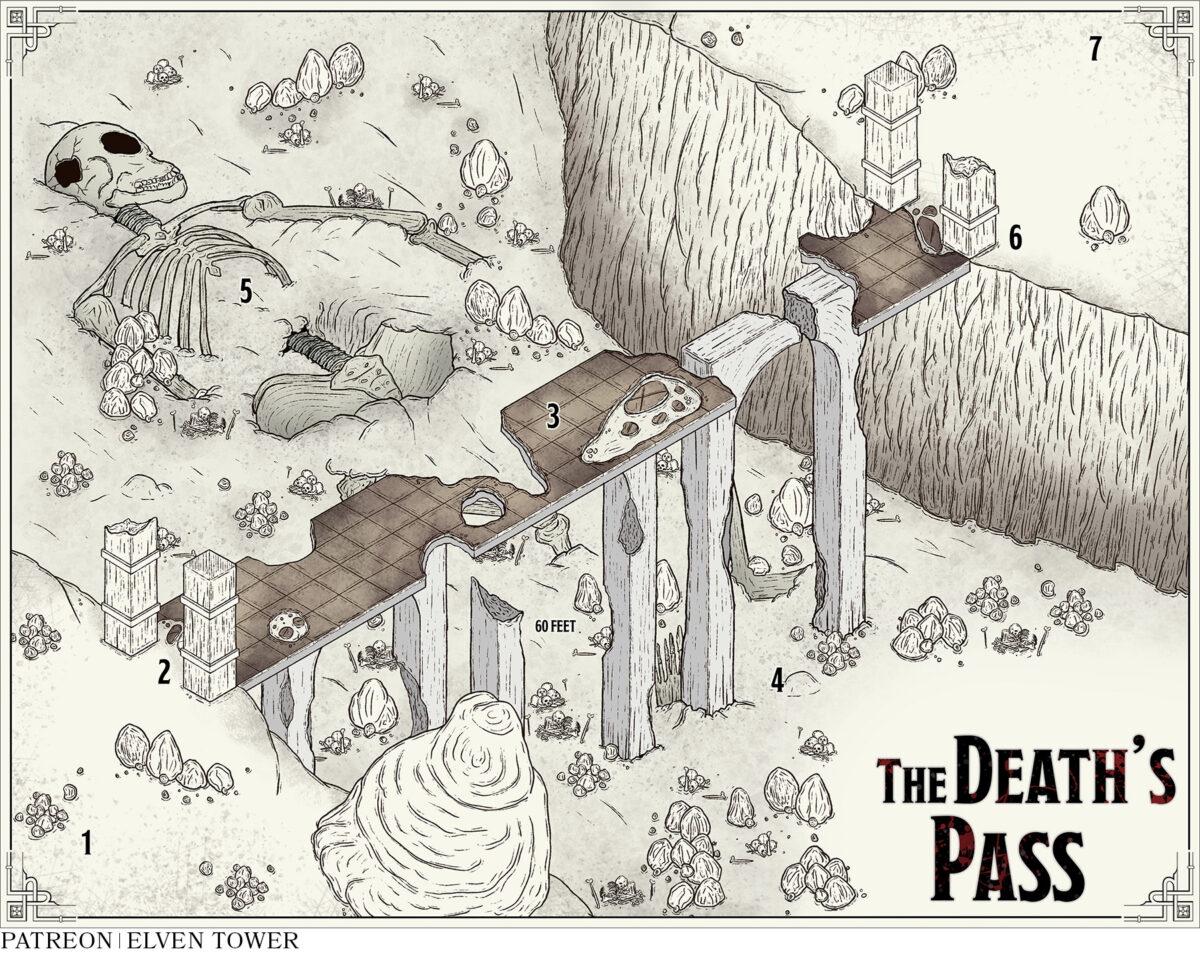 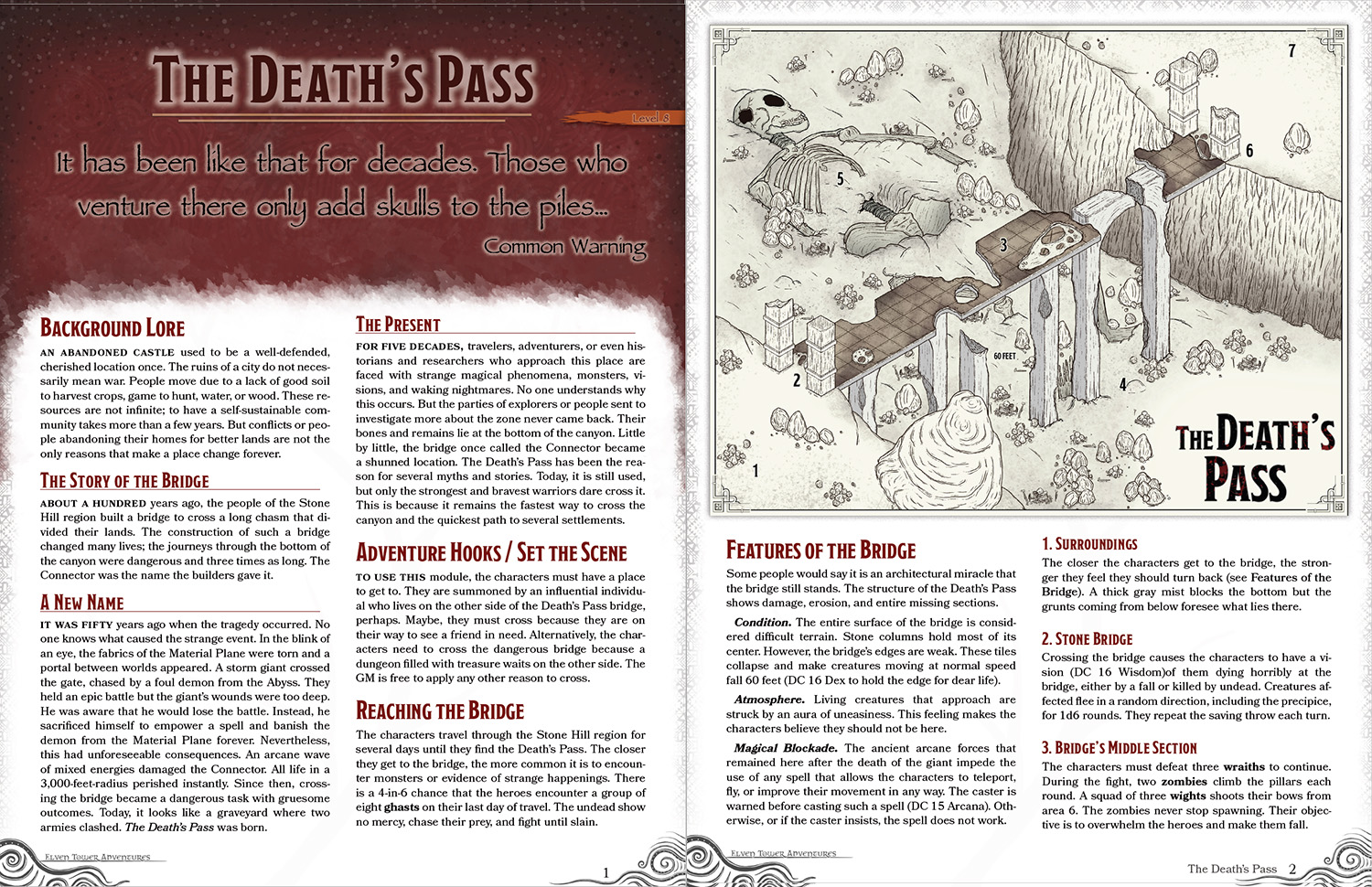 It has been like that for decades. Those who venture there only add skulls to the piles…

An abandoned castle used to be a well-defended, cherished location once. The ruins of a city do not neces­sarily mean war. People move due to a lack of good soil to harvest crops, game to hunt, water, or wood. These re­sources are not infinite; to have a self-sustainable com­munity takes more than a few years. But conflicts or peo­ple abandoning their homes for better lands are not the only reasons that make a place change forever.

The Story of the Bridge

About a hundred years ago, the people of the Stone Hill region built a bridge to cross a long chasm that di­vided their lands. The construction of such a bridge changed many lives; the journeys through the bottom of the canyon were dangerous and three times as long. The Connector was the name the builders gave it.

It was fifty years ago when the tragedy occurred. No one knows what caused the strange event. In the blink of an eye, the fabrics of the Material Plane were torn and a portal between worlds appeared. A storm giant crossed the gate, chased by a foul demon from the Abyss. They held an epic battle but the giant’s wounds were too deep. He was aware that he would lose the battle. Instead, he sacrificed himself to empower a spell and banish the demon from the Material Plane forever. Nevertheless, this had unforeseeable consequences. An arcane wave of mixed energies damaged the Connector. All life in a 3,000-feet-radius perished instantly. Since then, cross­ing the bridge became a dangerous task with gruesome outcomes. Today, it looks like a graveyard where two armies clashed. The Death’s Pass was born.

For five decades, travelers, adventurers, or even his­torians and researchers who approach this place are faced with strange magical phenomena, monsters, vi­sions, and waking nightmares. No one understands why this occurs. But the parties of explorers or people sent to investigate more about the zone never came back. Their bones and remains lie at the bottom of the canyon. Little by little, the bridge once called the Connector became a shunned location. The Death’s Pass has been the rea­son for several myths and stories. Today, it is still used, but only the strongest and bravest warriors dare cross it. This is because it remains the fastest way to cross the canyon and the quickest path to several settlements.

To use this module, the characters must have a place to get to. They are summoned by an influential individu­al who lives on the other side of the Death’s Pass bridge, perhaps. Maybe, they must cross because they are on their way to see a friend in need. Alternatively, the char­acters need to cross the dangerous bridge because a dungeon filled with treasure waits on the other side. The GM is free to apply any other reason to cross.

The characters travel through the Stone Hill region for several days until they find the Death’s Pass. The closer they get to the bridge, the more common it is to encoun­ter monsters or evidence of strange happenings. There is a 4-in-6 chance that the heroes encounter a group of eight ghasts on their last day of travel. The undead show no mercy, chase their prey, and fight until slain.

Features of the Bridge

Some people would say it is an architectural miracle that the bridge still stands. The structure of the Death’s Pass shows damage, erosion, and entire missing sections.

Condition. The entire surface of the bridge is consid­ered difficult terrain. Stone columns hold most of its center. However, the bridge’s edges are weak. These tiles collapse and make creatures moving at normal speed fall 60 feet (DC 16 Dex to hold the edge for dear life).

Atmosphere. Living creatures that approach are struck by an aura of uneasiness. This feeling makes the characters believe they should not be here.

Magical Blockade. The ancient arcane forces that remained here after the death of the giant impede the use of any spell that allows the characters to teleport, fly, or improve their movement in any way. The caster is warned before casting such a spell (DC 15 Arcana). Oth­erwise, or if the caster insists, the spell does not work.

The closer the characters get to the bridge, the stron­ger they feel they should turn back (see Features of the Bridge). A thick gray mist blocks the bottom but the grunts coming from below foresee what lies there.

Crossing the bridge causes the characters to have a vi­sion (DC 16 Wisdom)of them dying horribly at the bridge, either by a fall or killed by undead. Creatures af­fected flee in a random direction, including the precipice, for 1d6 rounds. They repeat the saving throw each turn.

The characters must defeat three wraiths to continue. During the fight, two zombies climb the pillars each round. A squad of three wights shoots their bows from area 6. The zombies never stop spawning. Their objec­tive is to overwhelm the heroes and make them fall.

The mist floats 20 feet above the bottom of the canyon, creating an ephemeral ceiling. Endless piles of bones, and rubble make it hard to walk in a straight line. From here, the giant’s skeleton may be studied.

Falling. Creatures take 6d6 bludgeoning damage (DC 15 Dex / half) if they fall from the bridge above.

Undead. There is a 3-in-6 chance every minute that random enemies appear, created by this unhallow land.

If the characters approach the skull of the giant out of mere curiosity or to investigate, they trigger a magical ef­fect. The giant’s spirit is aware of what happened here af­ter his demise. He begs the heroes to eradicate evil from this place so he may finally rest (see Development).

6. Reaching the Other Side

The three wights draw their swords if the characters get to them. The heroes must jump across or use climbing gear to reach the other side since most magical means are not possible (see Features of the Bridge).

The characters made it! They crossed the deadly bridge and they are one step closer to their destination. The dangers and mysteries of the canyon are left behind.

The characters’ destination after crossing the bridge de­pends on what their objective was (see Adventure Hooks / Set the Scene). The GM decides how to proceed re­garding the details of the rest of their next journey.

More Bones for the Graveyard

If the characters fall into the canyon and fail to climb up (DC 18 Athletics), they must run or fight the endless waves of monsters that spawn (see area 4). The monsters stop spawning once they get 500 feet away.

If the characters interacted with the giant, they have the choice to please the giant’s spirit and find a way to re­move the evil from this area. It might not be wise to ig­nore the giant’s wish. The GM determines how to lift the land’s curse. Alas, this is an adventure for another day… 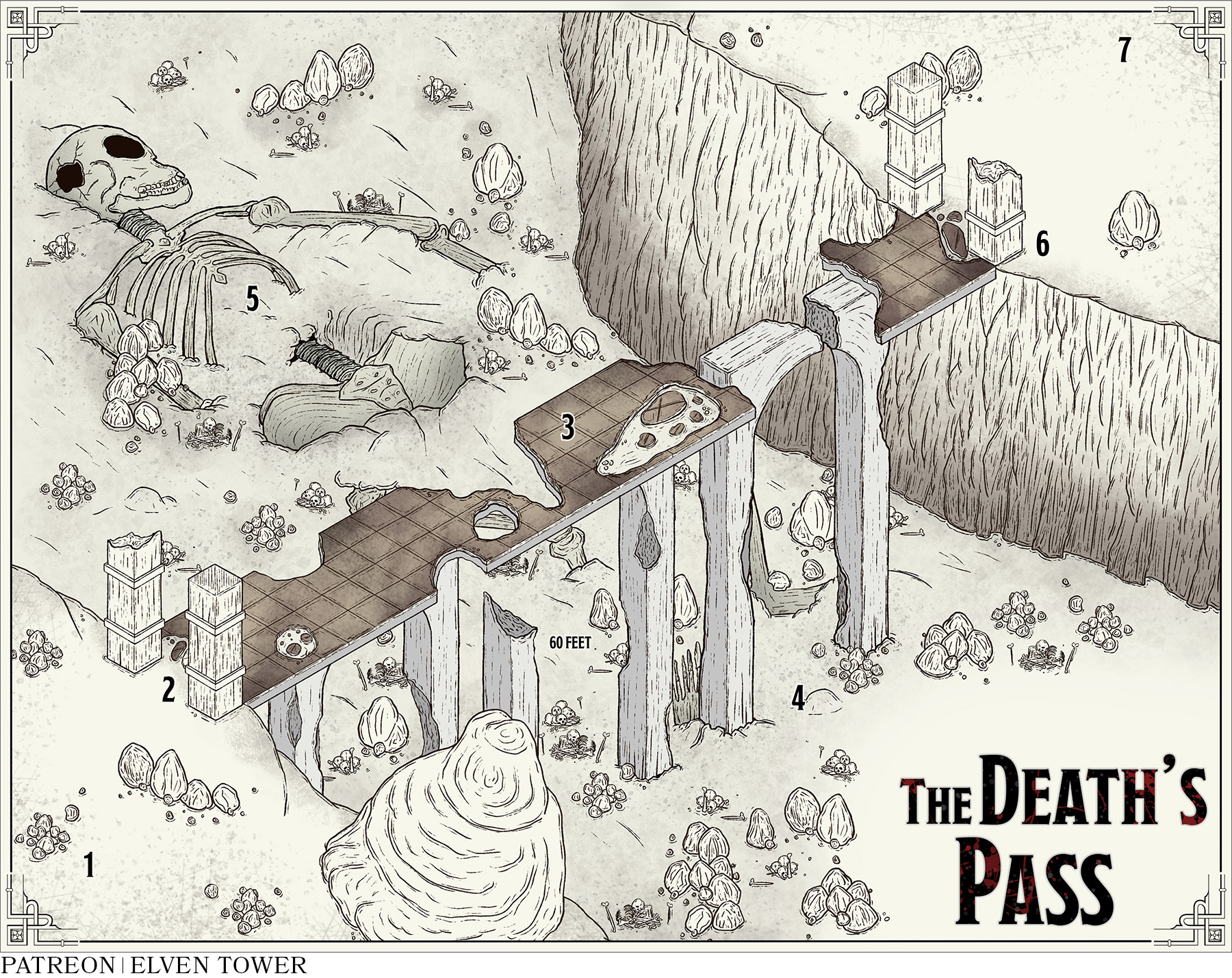