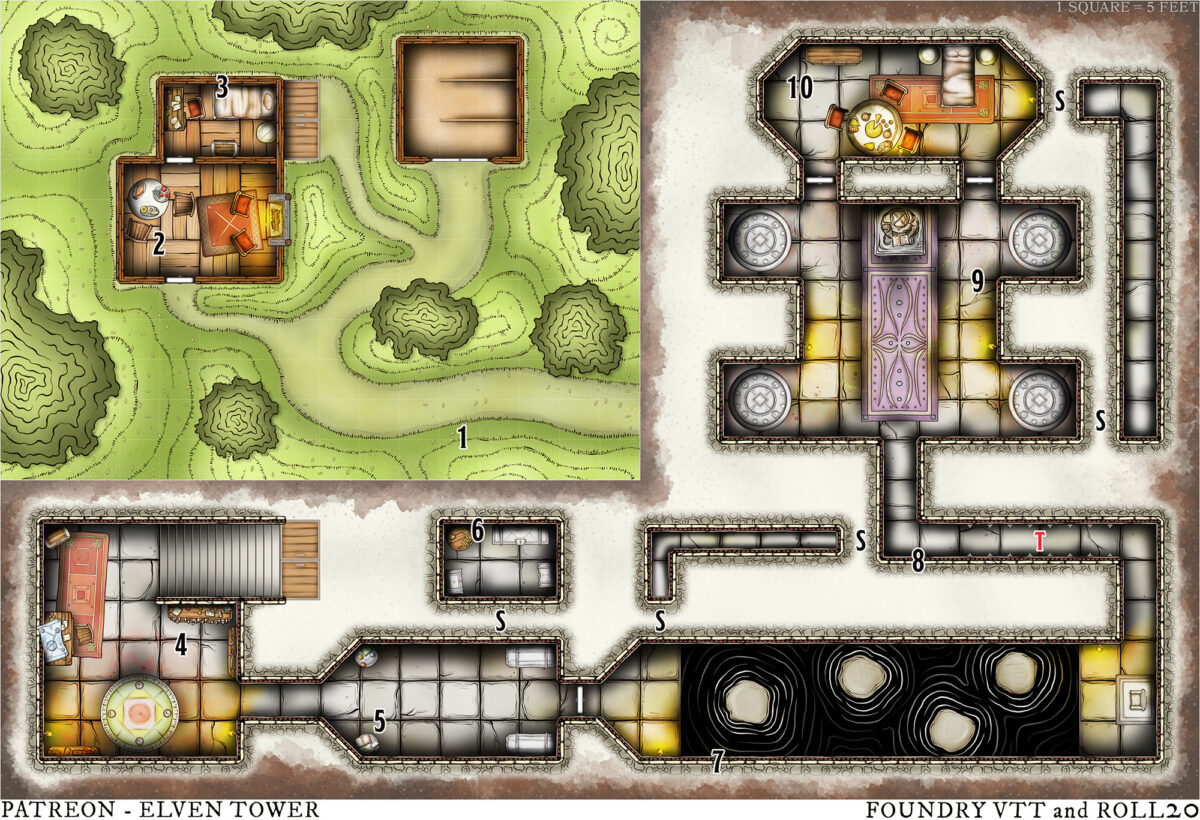 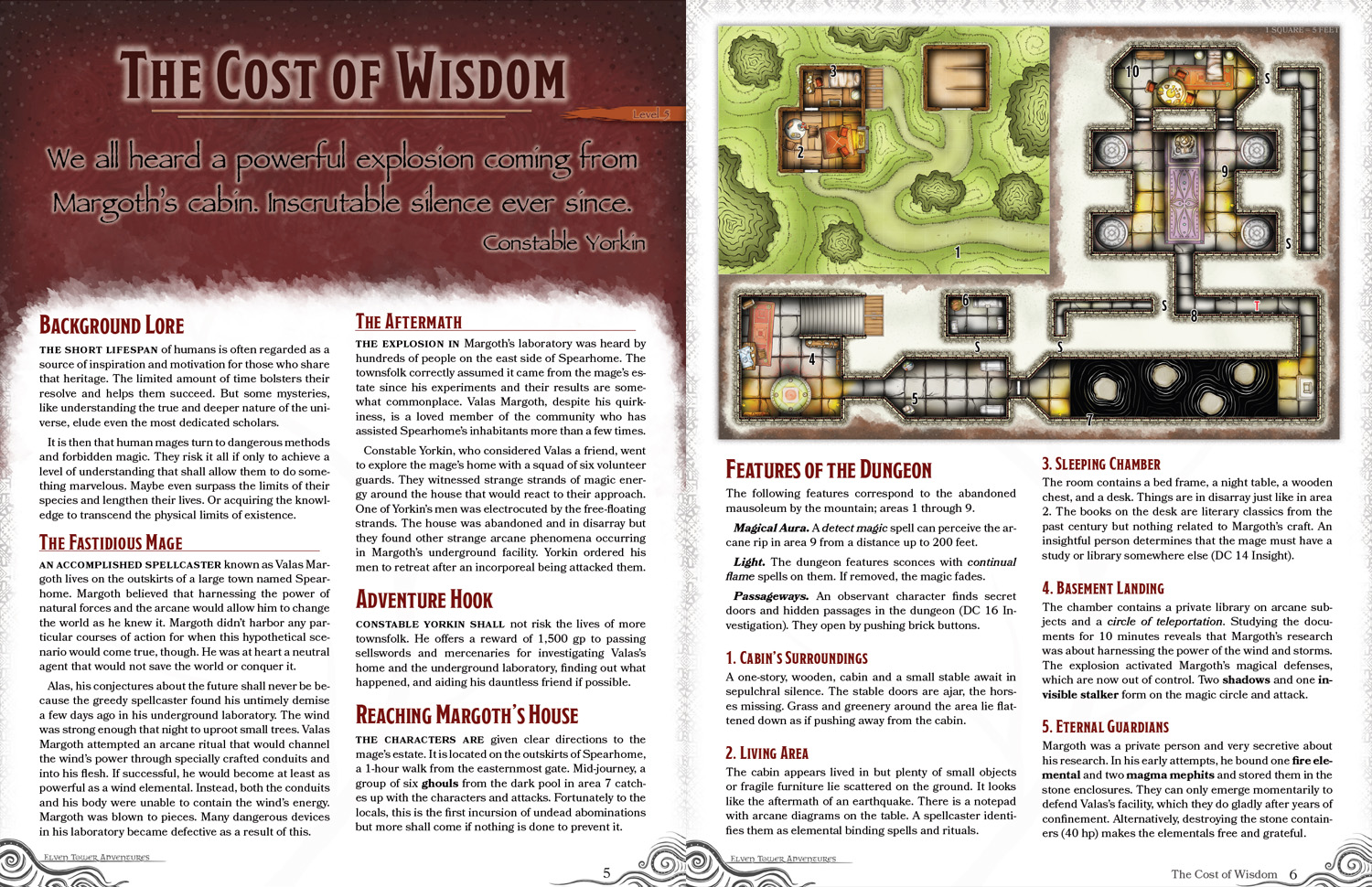 We all heard a powerful explosion coming from Margoth’s cabin. Inscrutable silence ever since.

The short lifespan of humans is often regarded as a source of inspiration and motivation for those who share that heritage. The limited amount of time bolsters their resolve and helps them succeed. But some mysteries, like understanding the true and deeper nature of the uni­verse, elude even the most dedicated scholars.

It is then that human mages turn to dangerous methods and forbidden magic. They risk it all if only to achieve a level of understanding that shall allow them to do some­thing marvelous. Maybe even surpass the limits of their species and lengthen their lives. Or acquiring the knowl­edge to transcend the physical limits of existence.

An accomplished spellcaster known as Valas Mar­goth lives on the outskirts of a large town named Spear­home. Margoth believed that harnessing the power of natural forces and the arcane would allow him to change the world as he knew it. Margoth didn’t harbor any par­ticular courses of action for when this hypothetical sce­nario would come true, though. He was at heart a neutral agent that would not save the world or conquer it.

Alas, his conjectures about the future shall never be be­cause the greedy spellcaster found his untimely demise a few days ago in his underground laboratory. The wind was strong enough that night to uproot small trees. Valas Margoth attempted an arcane ritual that would channel the wind’s power through specially crafted conduits and into his flesh. If successful, he would become at least as powerful as a wind elemental. Instead, both the conduits and his body were unable to contain the wind’s energy. Margoth was blown to pieces. Many dangerous devices in his laboratory became defective as a result of this.

The explosion in Margoth’s laboratory was heard by hundreds of people on the east side of Spearhome. The townsfolk correctly assumed it came from the mage’s es­tate since his experiments and their results are some­what commonplace. Valas Margoth, despite his quirk­iness, is a loved member of the community who has assisted Spearhome’s inhabitants more than a few times.

Constable Yorkin, who considered Valas a friend, went to explore the mage’s home with a squad of six volunteer guards. They witnessed strange strands of magic ener­gy around the house that would react to their approach. One of Yorkin’s men was electrocuted by the free-floating strands. The house was abandoned and in disarray but they found other strange arcane phenomena occurring in Margoth’s underground facility. Yorkin ordered his men to retreat after an incorporeal being attacked them.

Constable Yorkin shall not risk the lives of more townsfolk. He offers a reward of 1,500 gp to passing sellswords and mercenaries for investigating Valas’s home and the underground laboratory, finding out what happened, and aiding his dauntless friend if possible.

The characters are given clear directions to the mage’s estate. It is located on the outskirts of Spearhome, a 1-hour walk from the easternmost gate. Mid-journey, a group of six ghouls from the dark pool in area 7 catch­es up with the characters and attacks. Fortunately to the locals, this is the first incursion of undead abominations but more shall come if nothing is done to prevent it.

The following features correspond to the abandoned mausoleum by the mountain; areas 1 through 9.

Magical Aura. A detect magic spell can perceive the ar­cane rip in area 9 from a distance up to 200 feet.

A one-story, wooden, cabin and a small stable await in sepulchral silence. The stable doors are ajar, the hors­es missing. Grass and greenery around the area lie flat­tened down as if pushing away from the cabin.

The cabin appears lived in but plenty of small objects or fragile furniture lie scattered on the ground. It looks like the aftermath of an earthquake. There is a notepad with arcane diagrams on the table. A spellcaster identi­fies them as elemental binding spells and rituals.

The room contains a bed frame, a night table, a wooden chest, and a desk. Things are in disarray just like in area 2. The books on the desk are literary classics from the past century but nothing related to Margoth’s craft. An insightful person determines that the mage must have a study or library somewhere else (DC 14 Insight).

The chamber contains a private library on arcane sub­jects and a circle of teleportation. Studying the docu­ments for 10 minutes reveals that Margoth’s research was about harnessing the power of the wind and storms. The explosion activated Margoth’s magical defenses, which are now out of control. Two shadows and one in­visible stalker form on the magic circle and attack.

Margoth was a private person and very secretive about his research. In his early attempts, he bound one fire ele­mental and two magma mephits and stored them in the stone enclosures. They can only emerge momentarily to defend Valas’s facility, which they do gladly after years of confinement. Alternatively, destroying the stone contain­ers (40 hp) makes the elementals free and grateful.

The vault contains three stone coffers and a wooden shelf. A thick layer of dust covers everything in the room.

Valas Margoth created this 15-foot-deep pool of orig­inally iridescent fluid. The strange chamber had many uses: summoning creatures, accelerating healing, and even divination incantations (DC 16 Arcana). The explo­sion in area 9 imbued the pool with waves of raw nec­romancy and turned it dark. This caused the spawning of undead abominations. Four ghasts and six zombies emerge from the pool and attack. Paralyzed characters are thrown into the agitated pool (see below).

The Pool. Creatures that fall into the pool are grabbed by undead hands spawning from the pool’s bottom (DC 14 Dexterity). The hands pull downward and attempt to drown their target. Creatures that die in this manner be­come mindless ghouls. New undead are created at dawn.

Stepping on the pressure-plate (see map) triggers a bar­rage of poisoned darts to emerge from the walls. Crea­tures in the area take 6d6 poison damage and are poi­soned for 1 hour (DC 16 Constitution / half). The trap resets after 10 minutes. The characters can bypass this hallway altogether by taking the secret path that con­nects areas 7 and 8. Valas Margoth used this passage to avoid his own traps which are always active.

The large chamber contains four stone circles and a stat­ue of Margoth reading a tome. All other furnishings and devices in the room were destroyed in the explosion. There are scorch marks all over the floor, walls, and ceil­ing. Margoth’s spirit (ghost) emerges from the statue, it has been invaded by remorse, fear, and regret. The ha­tred-filled spirit and eight shadows attack the charac­ters. The only way to free Valas Margoth from his cur­rent state is to defeat this evil manifestation.

Studying the contents of Margoth’s private research pa­pers reveals the nature of his experiment. A spellcaster finds the calculation error he made in the journals and knows that the poor man died in a fiery explosion (DC 18 Arcana). The spellcaster may replicate the experiment.

Defeating Margoth releases the man from his painful existence and dulls down the arcane auras in area 9. The undead in areas 4 and 7 stop appearing but the elemen­tals in area 5 and the trap in area 8 remain. The charac­ters collect the reward from a sorrowful Constable Yor­kin after he learns that his mage friend has perished. The characters may attempt to replicate the storm-har­nessing ritual with some modifications to make it work. However, that is an adventure for another day… 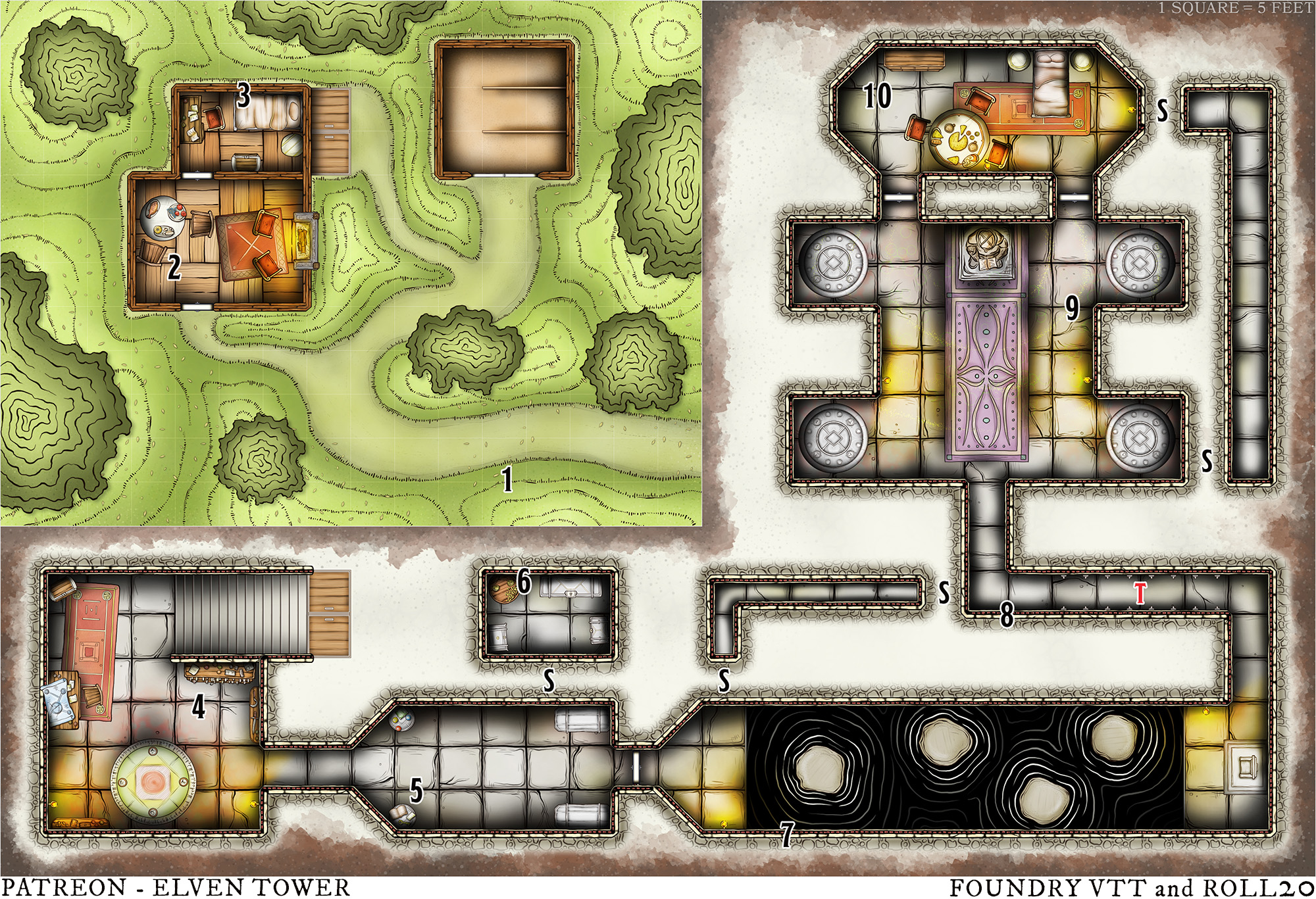