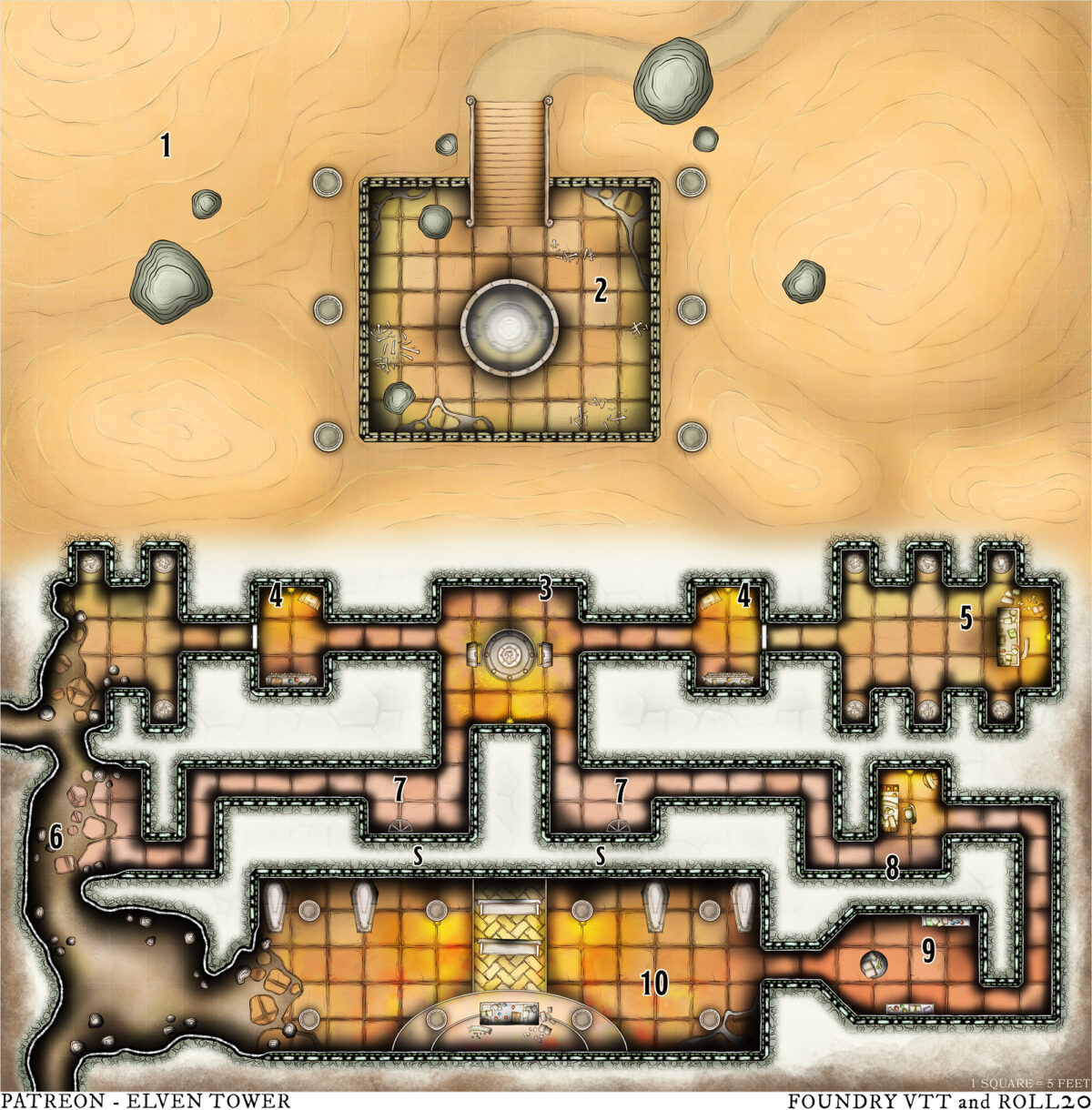 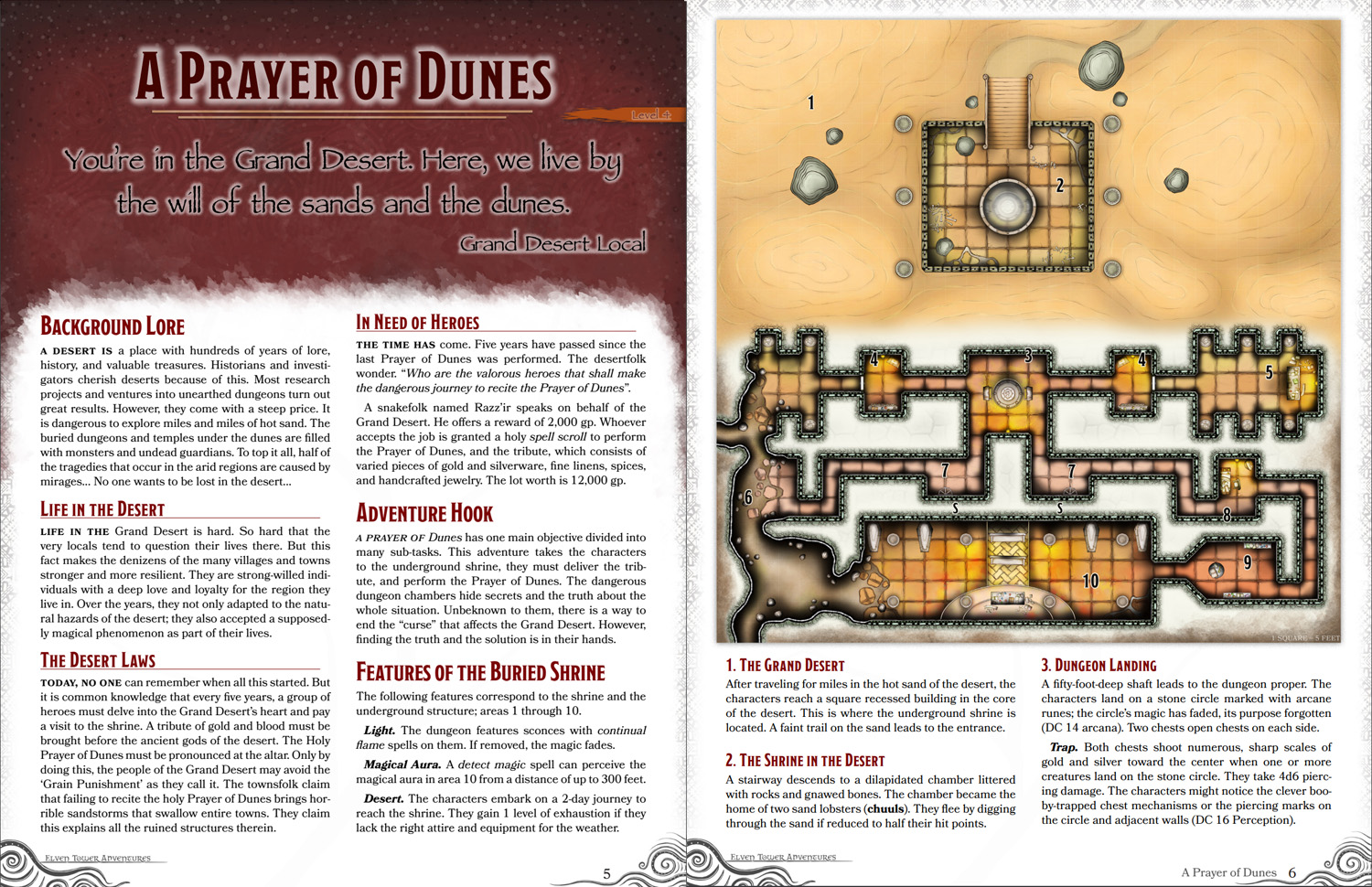 You’re in the Grand Desert. Here, we live by the will of the sands and the dunes.

A desert is a place with hundreds of years of lore, history, and valuable treasures. Historians and investi­gators cherish deserts because of this. Most research projects and ventures into unearthed dungeons turn out great results. However, they come with a steep price. It is dangerous to explore miles and miles of hot sand. The buried dungeons and temples under the dunes are filled with monsters and undead guardians. To top it all, half of the tragedies that occur in the arid regions are caused by mirages… No one wants to be lost in the desert…

Life in the Desert

Life in the Grand Desert is hard. So hard that the very locals tend to question their lives there. But this fact makes the denizens of the many villages and towns stronger and more resilient. They are strong-willed indi­viduals with a deep love and loyalty for the region they live in. Over the years, they not only adapted to the natu­ral hazards of the desert; they also accepted a supposed­ly magical phenomenon as part of their lives.

Today, no one can remember when all this started. But it is common knowledge that every five years, a group of heroes must delve into the Grand Desert’s heart and pay a visit to the shrine. A tribute of gold and blood must be brought before the ancient gods of the desert. The Holy Prayer of Dunes must be pronounced at the altar. Only by doing this, the people of the Grand Desert may avoid the ‘Grain Punishment’ as they call it. The townsfolk claim that failing to recite the holy Prayer of Dunes brings hor­rible sandstorms that swallow entire towns. They claim this explains all the ruined structures therein.

In Need of Heroes

The time has come. Five years have passed since the last Prayer of Dunes was performed. The desertfolk wonder. “Who are the valorous heroes that shall make the dangerous journey to recite the Prayer of Dunes”.

A snakefolk named Razz’ir speaks on behalf of the Grand Desert. He offers a reward of 2,000 gp. Whoever accepts the job is granted a holy spell scroll to perform the Prayer of Dunes, and the tribute, which consists of varied pieces of gold and silverware, fine linens, spices, and handcrafted jewelry. The lot worth is 12,000 gp.

A Prayer of Dunes has one main objective divided into many sub-tasks. This adventure takes the characters to the underground shrine, they must deliver the trib­ute, and perform the Prayer of Dunes. The dangerous dungeon chambers hide secrets and the truth about the whole situation. Unbeknown to them, there is a way to end the “curse” that affects the Grand Desert. However, finding the truth and the solution is in their hands.

Features of the Buried Shrine

The following features correspond to the shrine and the underground structure; areas 1 through 10.

Magical Aura. A detect magic spell can perceive the magical aura in area 10 from a distance of up to 300 feet.

Desert. The characters embark on a 2-day journey to reach the shrine. They gain 1 level of exhaustion if they lack the right attire and equipment for the weather.

After traveling for miles in the hot sand of the desert, the characters reach a square recessed building in the core of the desert. This is where the underground shrine is located. A faint trail on the sand leads to the entrance.

2. The Shrine in the Desert

A stairway descends to a dilapidated chamber littered with rocks and gnawed bones. The chamber became the home of two sand lobsters (chuuls). They flee by digging through the sand if reduced to half their hit points.

A fifty-foot-deep shaft leads to the dungeon proper. The characters land on a stone circle marked with arcane runes; the circle’s magic has faded, its purpose forgotten (DC 14 arcana). Two chests open chests on each side.

Trap. Both chests shoot numerous, sharp scales of gold and silver toward the center when one or more creatures land on the stone circle. They take 4d6 pierc­ing damage. The characters might notice the clever boo­by-trapped chest mechanisms or the piercing marks on the circle and adjacent walls (DC 16 Perception).

Partial truths about this place and the Grand Desert are here. The characters must find the hidden compart­ments in each chamber, though (DC 17 Investigation).

East Studio. If the characters spend 10 minutes read­ing the hidden documents in this area, they learn that:

West Studio. If the characters find the hidden lore, they find an old parchment with a fragment of a letter:

“…ill they know nothing! Their ignorant brains hav­en’t figured it out. We can count on that gold every five years. In the long run, that boost to our econo­my shall fund the return of our empire! ”- In’hara

Six alcoves by the walls flank the stone altar by the cham­ber’s east end. If the characters approach, six shadows coalesce from the ashes and attack the intruders.

Ancient Magic. The papers on the altar show incom­plete formulae for powerful ancient rituals. A mage iden­tifies the spell’s objective is to implant memories or spe­cific ideas in the minds of others (DC 15 Arcana).

This area used to be identical to its eastern counterpart but cave-ins and the shifting of the dunes have caused the west side of the shrine to collapse. The dark tunnels take to the lairs of three sand lobsters (chuuls).

The characters can turn with the two steel wheels here with no apparent consequence. Turning both of them locks the hidden corridors (see below), but it unlocks the sarcophagi with the guardians (see Development).

Secret Corridors. Pressing a brick on the south wall reveals a hidden passage (DC 15 Perception). The brick does not work if the steel wheels were already turned.

If the characters search the place, they learn that In’hara implanted a fake memory on the denizens of the Grand Desert almost thirty years ago (DC 16 Investigation). The nature of this memory is not detailed here.

10. The Root of Everything

When the characters arrive, a floating illusion of a cloaked figure appears. A spectral voice speaks:

“The Prayer of Dunes must be uttered. Leave the tribute and speak the holy words. Only then, may the Grand Desert forgive and prevail”.

Fulfilling the Will of the Desert

The characters leave the tribute as they were in­structed and return to Razz’ir to get paid. The Grand Desert shall endure another 5 years under foul lies…

The characters realize the snakefolk are cheating the region’s denizens and refuse to obey. The sarcopha­gi release four ghasts. The guardians take two rounds to destroy the enclosures’ lids if the wheels were turned (see area 7). What the characters do with the truth or the tribute’s money is an adventure for another day… 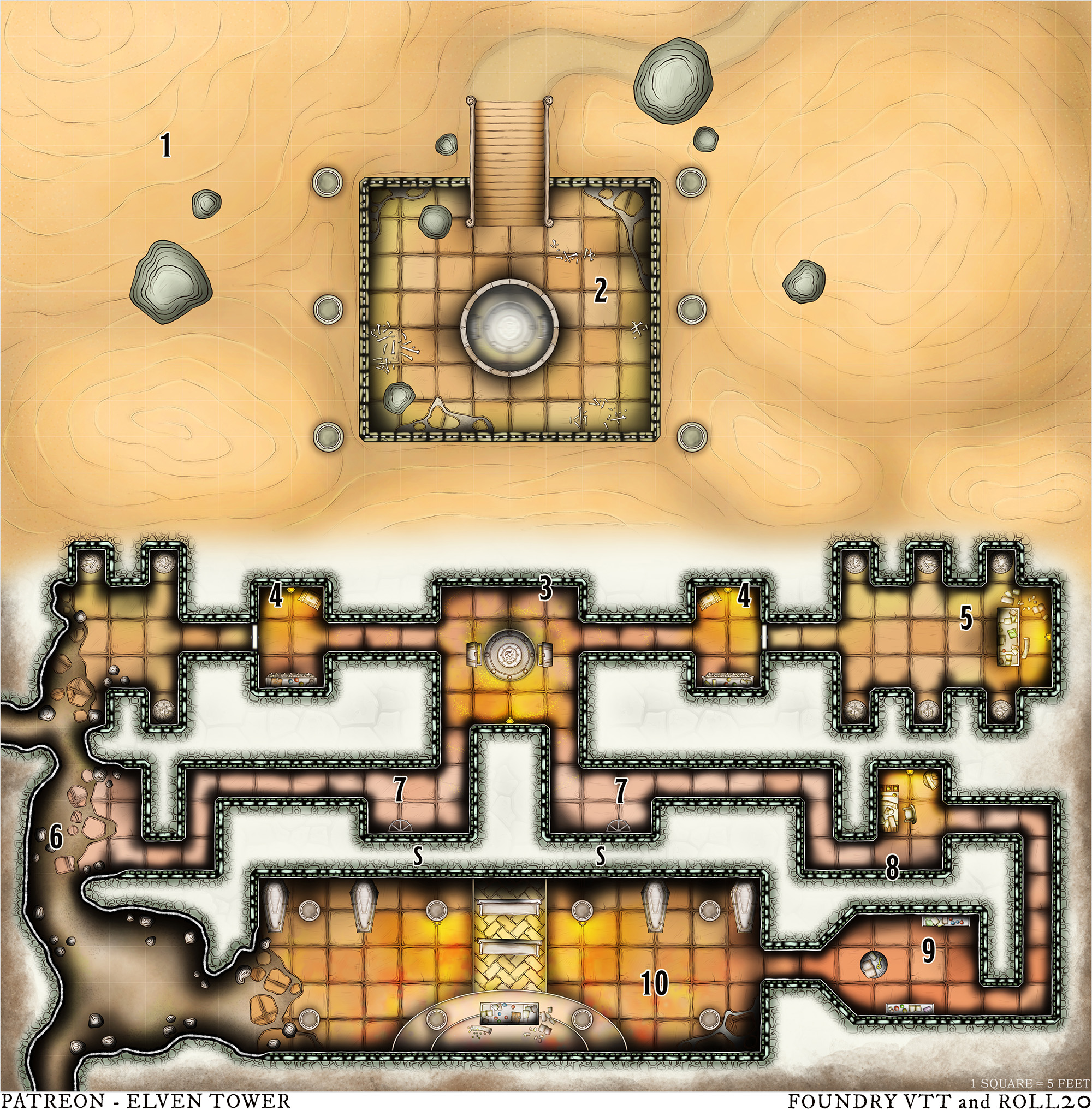