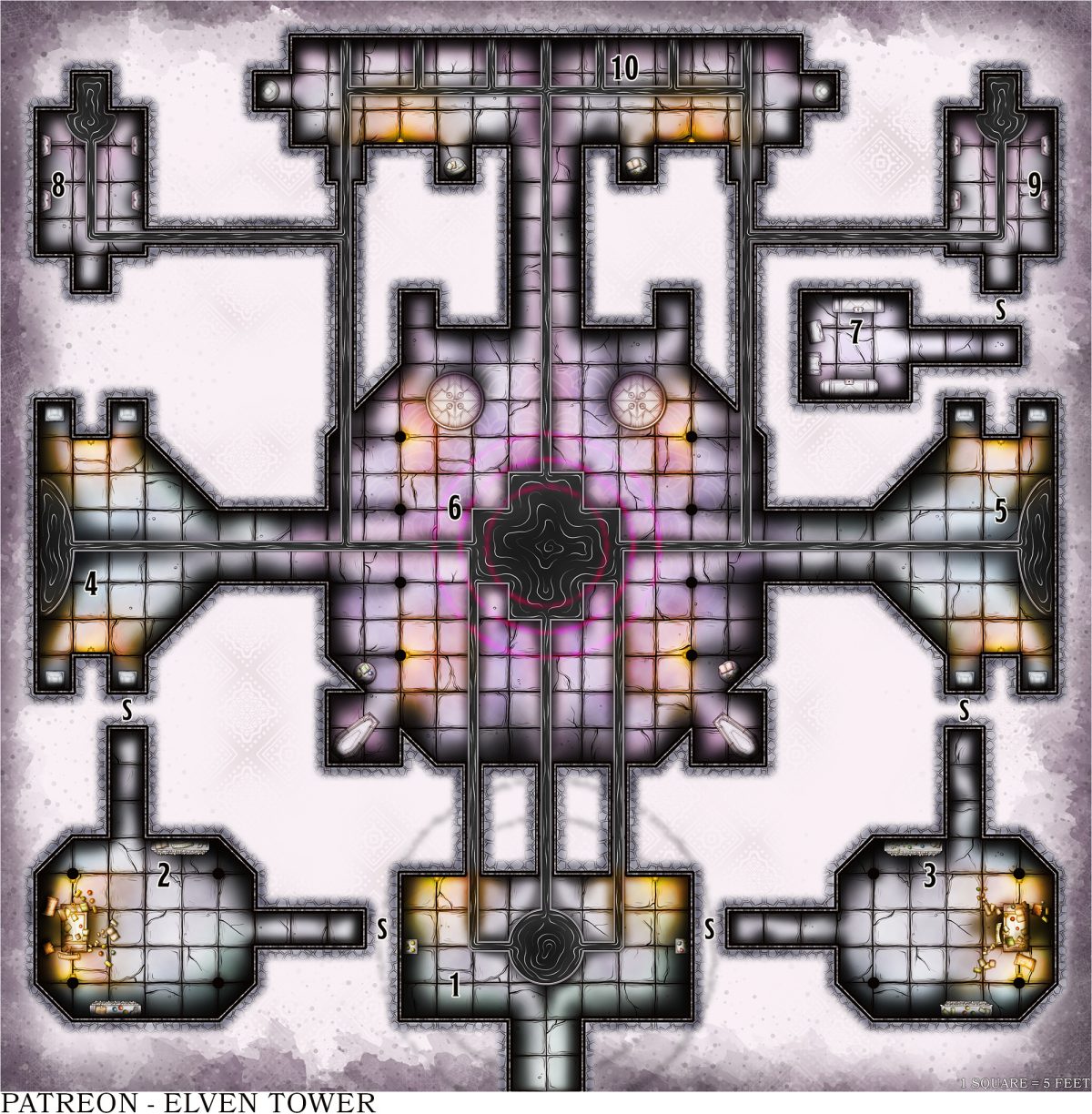 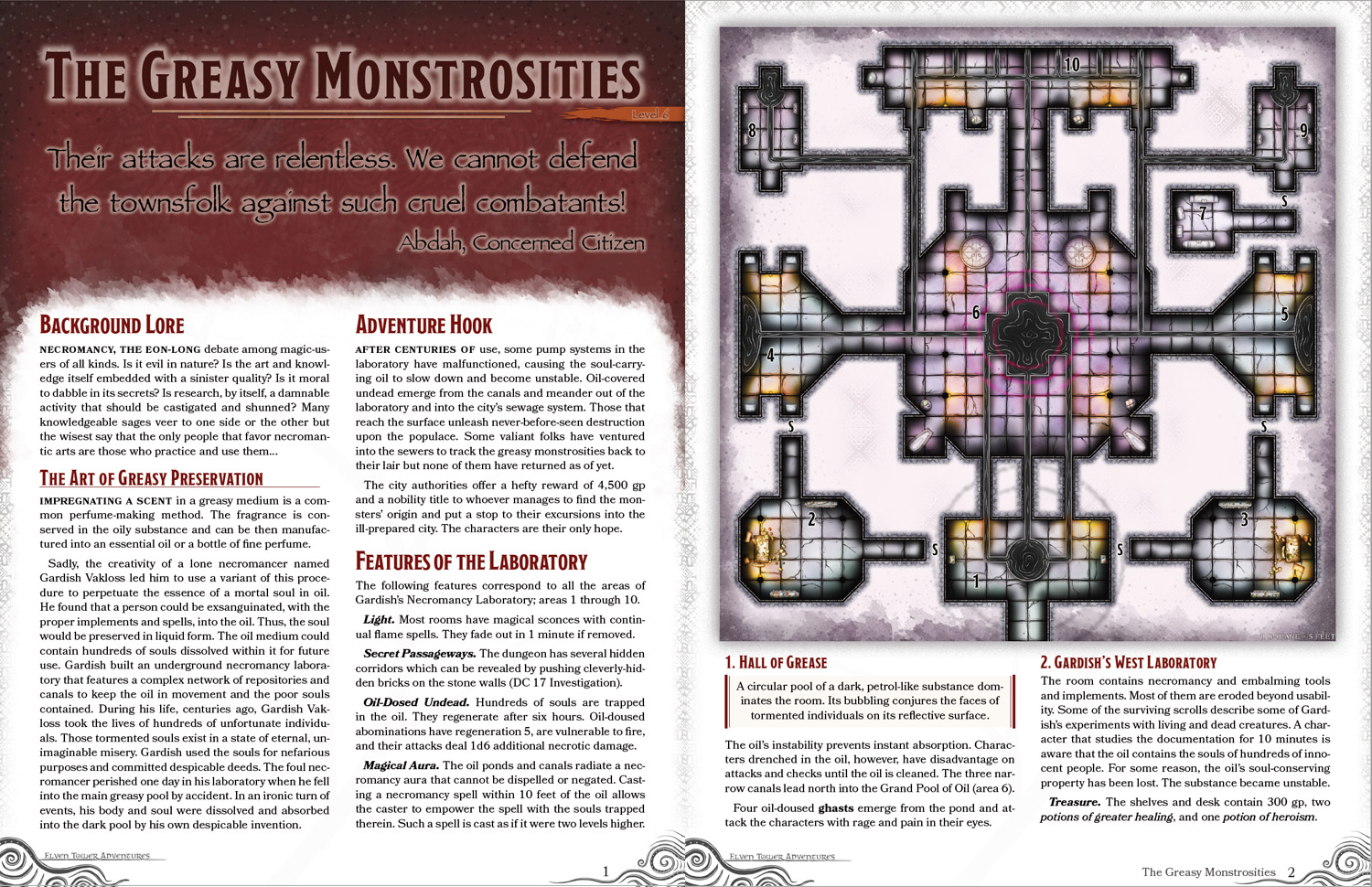 Their attacks are relentless. We cannot defend the townsfolk against such cruel combatants!

Necromancy, the eon-long debate among magic-us­ers of all kinds. Is it evil in nature? Is the art and knowl­edge itself embedded with a sinister quality? Is it moral to dabble in its secrets? Is research, by itself, a damnable activity that should be castigated and shunned? Many knowledgeable sages veer to one side or the other but the wisest say that the only people that favor necroman­tic arts are those who practice and use them…

The Art of Greasy Preservation

Impregnating a scent in a greasy medium is a com­mon perfume-making method. The fragrance is con­served in the oily substance and can be then manufac­tured into an essential oil or a bottle of fine perfume.

Sadly, the creativity of a lone necromancer named Gardish Vakloss led him to use a variant of this proce­dure to perpetuate the essence of a mortal soul in oil. He found that a person could be exsanguinated, with the proper implements and spells, into the oil. Thus, the soul would be preserved in liquid form. The oil medium could contain hundreds of souls dissolved within it for future use. Gardish built an underground necromancy labora­tory that features a complex network of repositories and canals to keep the oil in movement and the poor souls contained. During his life, centuries ago, Gardish Vak­loss took the lives of hundreds of unfortunate individu­als. Those tormented souls exist in a state of eternal, un­imaginable misery. Gardish used the souls for nefarious purposes and committed despicable deeds. The foul nec­romancer perished one day in his laboratory when he fell into the main greasy pool by accident. In an ironic turn of events, his body and soul were dissolved and absorbed into the dark pool by his own despicable invention.

After centuries of use, some pump systems in the laboratory have malfunctioned, causing the soul-carry­ing oil to slow down and become unstable. Oil-covered undead emerge from the canals and meander out of the laboratory and into the city’s sewage system. Those that reach the surface unleash never-before-seen destruction upon the populace. Some valiant folks have ventured into the sewers to track the greasy monstrosities back to their lair but none of them have returned as of yet.

The city authorities offer a hefty reward of 4,500 gp and a nobility title to whoever manages to find the mon­sters’ origin and put a stop to their excursions into the ill-prepared city. The characters are their only hope.

Features of the Laboratory

The following features correspond to all the areas of Gardish’s Necromancy Laboratory; areas 1 through 10.

Secret Passageways. The dungeon has several hidden corridors which can be revealed by pushing cleverly-hid­den bricks on the stone walls (DC 17 Investigation).

Oil-Dosed Undead. Hundreds of souls are trapped in the oil. They regenerate after six hours. Oil-doused abominations have regeneration 5, are vulnerable to fire, and their attacks deal 1d6 additional necrotic damage.

Magical Aura. The oil ponds and canals radiate a nec­romancy aura that cannot be dispelled or negated. Cast­ing a necromancy spell within 10 feet of the oil allows the caster to empower the spell with the souls trapped therein. Such a spell is cast as if it were two levels higher.

A circular pool of a dark, petrol-like substance dom­inates the room. Its bubbling conjures the faces of tormented individuals on its reflective surface.

The oil’s instability prevents instant absorption. Charac­ters drenched in the oil, however, have disadvantage on attacks and checks until the oil is cleaned. The three nar­row canals lead north into the Grand Pool of Oil (area 6).

Four oil-doused ghasts emerge from the pond and at­tack the characters with rage and pain in their eyes.

The room contains necromancy and embalming tools and implements. Most of them are eroded beyond usabil­ity. Some of the surviving scrolls describe some of Gard­ish’s experiments with living and dead creatures. A char­acter that studies the documentation for 10 minutes is aware that the oil contains the souls of hundreds of inno­cent people. For some reason, the oil’s soul-conserving property has been lost. The substance became unstable.

Treasure. The shelves and desk contain 300 gp, two potions of greater healing, and one potion of heroism.

The paranoid necromancer kept his subjects of study in two different secret laboratories. This chamber is simi­lar to area 2 but contains different information in the few surviving documents. A character that studies the docu­ments for 10 minutes learns that several pumps keep the oil flowing at a constant speed to keep it stable enough for soul-containment. If the pumps were to fail, the whole network of pools and canals would malfunction.

Treasure. The shelves and desk contain 250 gp, a ring of resistance, and two oils of slipperiness.

The oil canal dumps its slow-flowing content into a large pool that filters it and directs it back to area 10 through a hidden, underground pipe. Three oil-doused ghasts and one semi-incorporeal oil-doused specter emerge from the pond and attack any trespassers. The magical pump under the surface has malfunctioned. Repairing it brings the characters one step closer to fixing the system.

This chamber is identical to area 4 but the pump by the pond still functions. No undead spawn here. A character that examines the working pump has advantage when trying to repair those that don’t work (see Development).

6. The Grand Pool of Oil

Eight canals carrying their viscous, oily content con­verge in a central pool of bubbling insanity and de­tritus. The voices of the dead moan from below.

Gardish used the two incantation circles by the north side of the room to bleed his victims ceremoniously into the oil. Those magic circles have eroded and don’t work anymore. There are two deficient pumps under the sur­face of the grand pool that need maintenance. However, the characters must deal with the room’s greasy guard­ians before attempting any sort of repair.

A large, greasy, tentacled abomination made up of doz­ens of oil-infused bodies (shambling mound) emerg­es from the central pond, along with three oil-doused ghasts and four oil-doused zombies.

The reclusive necromancer kept his most valuable pos­sessions and his spellbook in this secure vault.

Treasure. The chamber contains 2,200 gp, a staff of withering, a wand of wonder, and a spellbook with the spells of a mage, plus three random necromancy spells.

The standing caskets in the room contain four ghouls that Gardish, the necromancer, placed here to protect his laboratory from trespassers. These are normal un­dead, unrelated to the oil-preservation techniques he lat­er developed. The undead exit their enclosures and at­tack as if they had received their orders only yesterday. The magical pump under the surface has malfunctioned but no additional undead spawn here. Repairing it brings the characters one step closer to fixing the system.

The chamber is identical to area 8 but the pump in this room still works as intended. A character that examines the working pump has advantage when trying to repair those that don’t work (see Development). Four ghouls emerge from the caskets but a deep voice commands them to stand still. Gardish Vakloss (wraith) emerg­es from the oil and confronts the characters. He is the only sentient undead in the laboratory; a savage curse by itself. The undead necromancer claims he has been trapped here for centuries, unable to solve the quanda­ry of his existence. And damned to see his life’s work destroyed. Gardish asks the characters to release all souls and destroy the lab. The humbled necromancer yearns for eternal rest. He claims that after repairing the pumps, a powerful priest can bless the central pool to ac­complish this (a hallow spell accomplishes this).

Underground pipes from other chambers reach this area where the oil is filtered and pumped back south toward the central pool and the other recollection chambers. Two pumps in this room need repairing.

Fixing the pumps in areas 4, 6, 8, and 10 causes the oily substance to flow faster and become stable (DC 16 Thieves’ Tools or Intelligence). No undead respawn af­ter this is done. If the necromancer’s wraith is still there, it asks again that all souls be released. Otherwise, the situation shall arise again. It is obvious that Gardish’s intentions are self-serving because his soul is trapped in the oil too. Doing this much fixes the problem too, though. This also earns the characters the gratitude of the city above. They are paid the monetary reward and are knighted by the thankful monarch. None shall soon forget the characters’ deeds and their bravery.

A powerful cleric can cleanse the oil pools in the dun­geon just as the necromancer claimed. All souls are re­leased to finally find eternal rest. Should the characters have other, more egotistical goals regarding the labora­tory and its endless source of necromantic power, they must deal with Gardish’s ever-returning spirit. 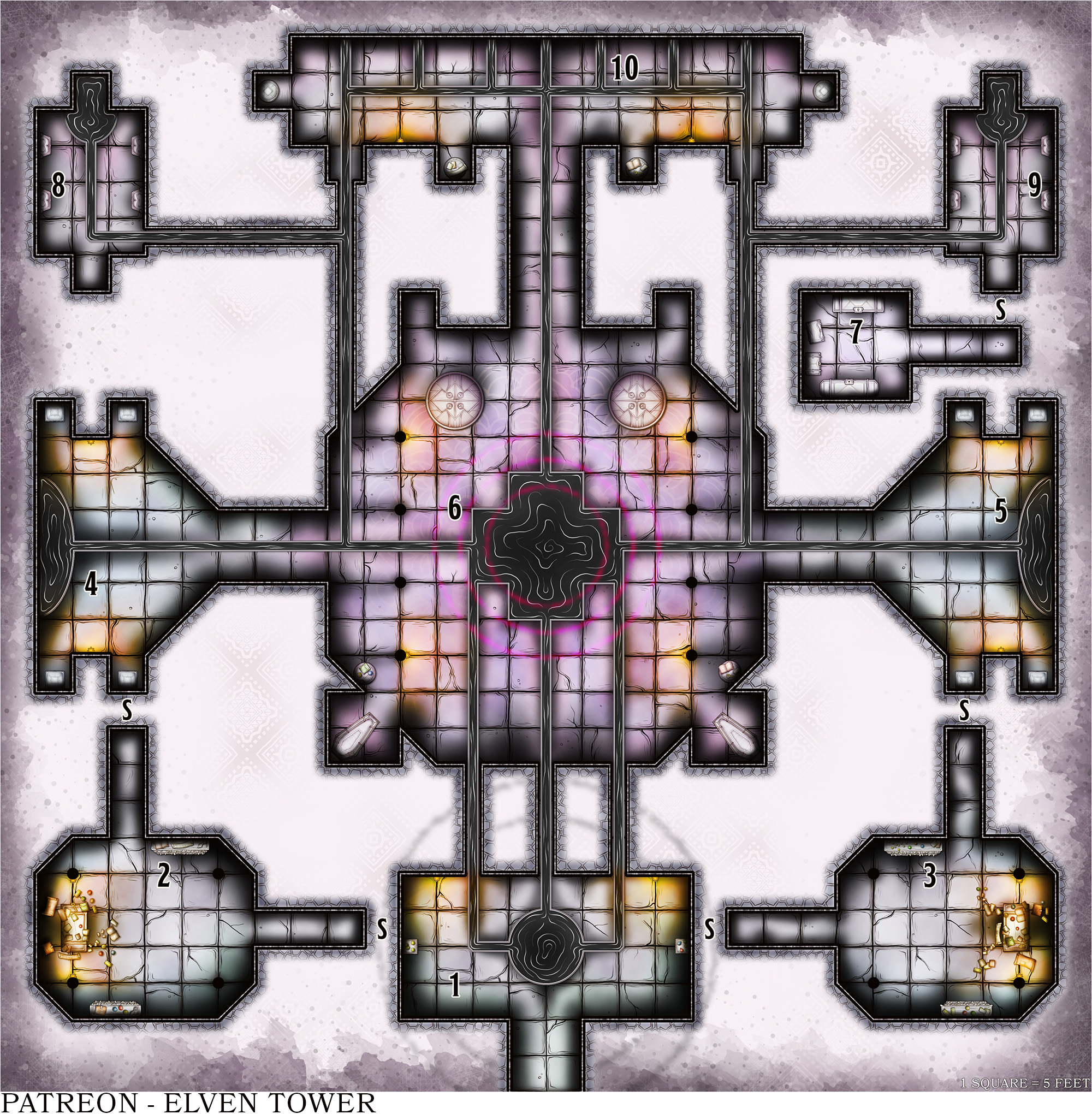