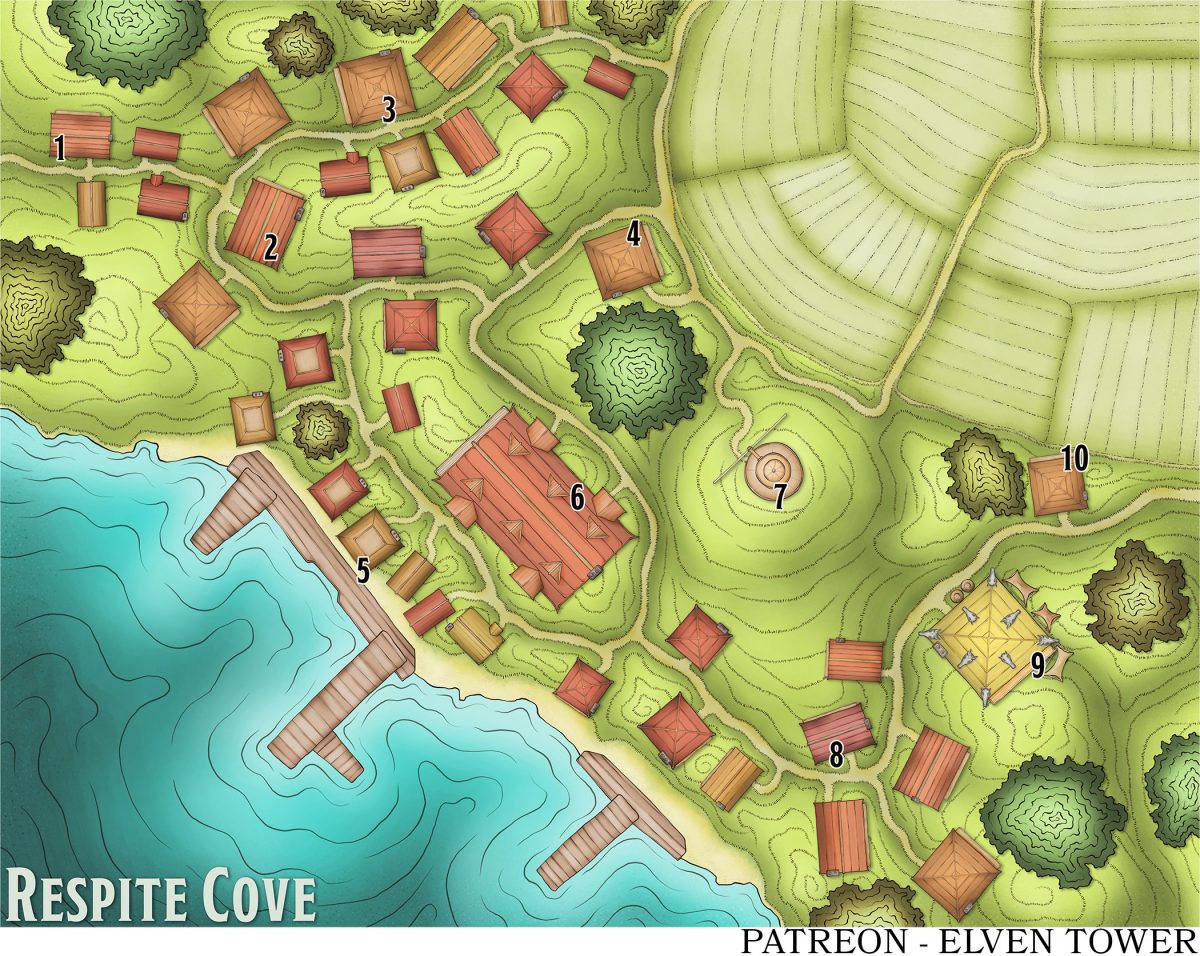 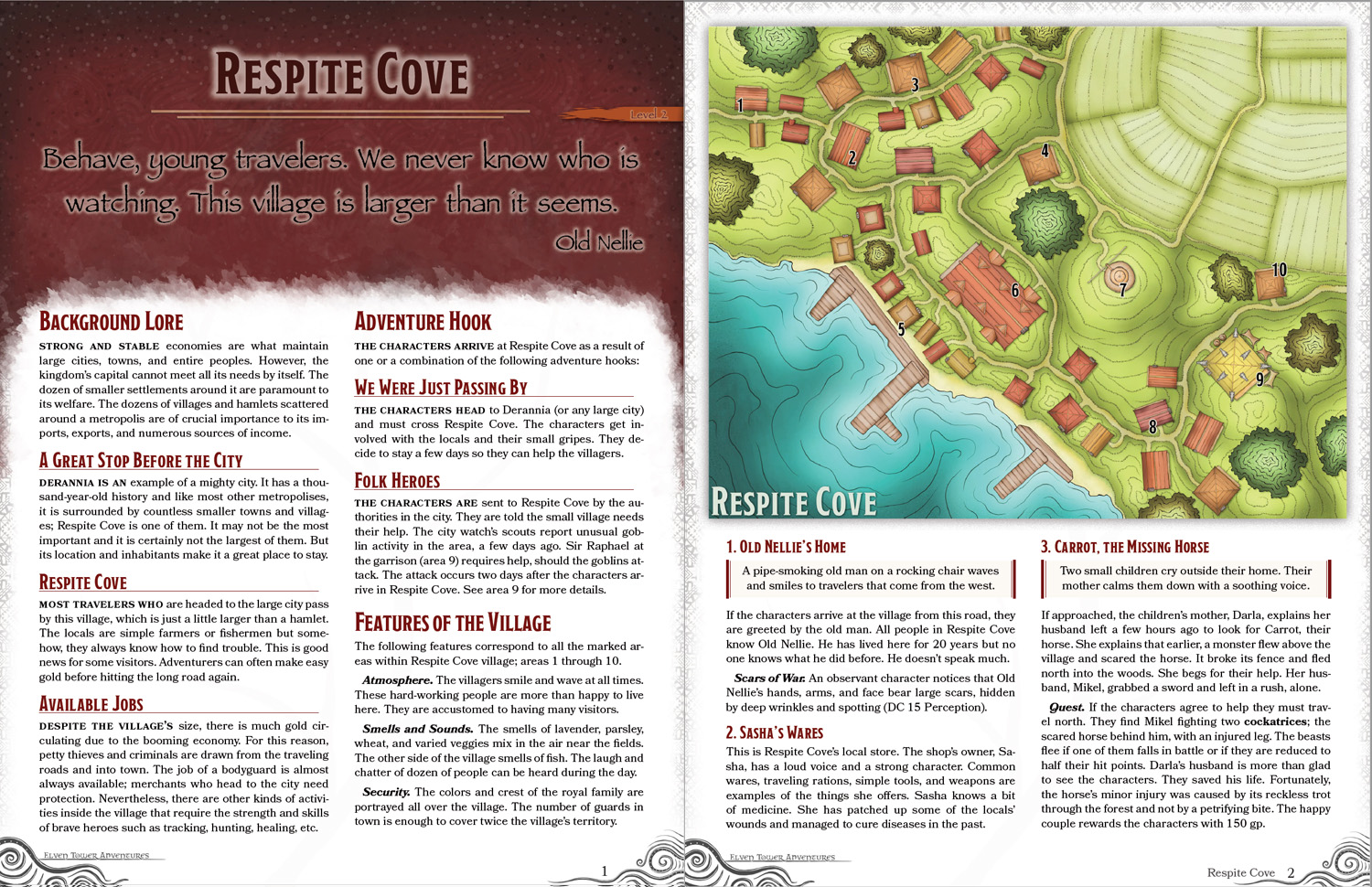 Behave, young travelers. We never know who is watching. This village is larger than it seems.

Strong and stable economies are what maintain large cities, towns, and entire peoples. However, the kingdom’s capital cannot meet all its needs by itself. The dozen of smaller settlements around it are paramount to its welfare. The dozens of villages and hamlets scattered around a metropolis are of crucial importance to its im­ports, exports, and numerous sources of income.

A Great Stop Before the City

Derannia is an example of a mighty city. It has a thou­sand-year-old history and like most other metropolises, it is surrounded by countless smaller towns and villag­es; Respite Cove is one of them. It may not be the most important and it is certainly not the largest of them. But its location and inhabitants make it a great place to stay.

Most travelers who are headed to the large city pass by this village, which is just a little larger than a hamlet. The locals are simple farmers or fishermen but some­how, they always know how to find trouble. This is good news for some visitors. Adventurers can often make easy gold before hitting the long road again.

Despite the village’s size, there is much gold cir­culating due to the booming economy. For this reason, petty thieves and criminals are drawn from the traveling roads and into town. The job of a bodyguard is almost always available; merchants who head to the city need protection. Nevertheless, there are other kinds of activi­ties inside the village that require the strength and skills of brave heroes such as tracking, hunting, healing, etc.

The characters arrive at Respite Cove as a result of one or a combination of the following adventure hooks:

We Were Just Passing By

The characters head to Derannia (or any large city) and must cross Respite Cove. The characters get in­volved with the locals and their small gripes. They de­cide to stay a few days so they can help the villagers.

The characters are sent to Respite Cove by the au­thorities in the city. They are told the small village needs their help. The city watch’s scouts report unusual gob­lin activity in the area, a few days ago. Sir Raphael at the garrison (area 9) requires help, should the goblins at­tack. The attack occurs two days after the characters ar­rive in Respite Cove. See area 9 for more details.

Features of the Village

The following features correspond to all the marked ar­eas within Respite Cove village; areas 1 through 10.

Atmosphere. The villagers smile and wave at all times. These hard-working people are more than happy to live here. They are accustomed to having many visitors.

Smells and Sounds. The smells of lavender, parsley, wheat, and varied veggies mix in the air near the fields. The other side of the village smells of fish. The laugh and chatter of dozen of people can be heard during the day.

Security. The colors and crest of the royal family are portrayed all over the village. The number of guards in town is enough to cover twice the village’s territory.

A pipe-smoking old man on a rocking chair waves and smiles to travelers that come from the west.

If the characters arrive at the village from this road, they are greeted by the old man. All people in Respite Cove know Old Nellie. He has lived here for 20 years but no one knows what he did before. He doesn’t speak much.

This is Respite Cove’s local store. The shop’s owner, Sa­sha, has a loud voice and a strong character. Common wares, traveling rations, simple tools, and weapons are examples of the things she offers. Sasha knows a bit of medicine. She has patched up some of the locals’ wounds and managed to cure diseases in the past.

Two small children cry outside their home. Their mother calms them down with a soothing voice.

If approached, the children’s mother, Darla, explains her husband left a few hours ago to look for Carrot, their horse. She explains that earlier, a monster flew above the village and scared the horse. It broke its fence and fled north into the woods. She begs for their help. Her hus­band, Mikel, grabbed a sword and left in a rush, alone.

Quest. If the characters agree to help they must trav­el north. They find Mikel fighting two cockatrices; the scared horse behind him, with an injured leg. The beasts flee if one of them falls in battle or if they are reduced to half their hit points. Darla’s husband is more than glad to see the characters. They saved his life. Fortunately, the horse’s minor injury was caused by its reckless trot through the forest and not by a petrifying bite. The happy couple rewards the characters with 150 gp.

4. The Gripes of a Farmer

Peter is a wheat and rice farmer. He is also responsible for the mill (area 7). He approaches the characters to tell them he needs their help. The city has not answered his pleas. He claims a pack of giant rats took over the mill.

Despite the village’s size, commerce by the docks is on an upward trend. There are dozens of fishing barges, small boats, and fish stalls in the area.

New people arrive daily at the largest building in the vil­lage. The size, quality, and facilities of Respite Cove’s inn match those of the capital. It is not cheap to stay here due to the high demand from the numerous merchants.

The mill is locked but if the characters talk to Peter in area 4, he gives them the key to the door’s padlock.

Quest. If the characters agree to help, they must clear the mill of the six giant rats hiding in the basement. Pierre thanks and rewards the heroes with 100 gp.

When the characters approach this area, a young wom­an talks to them. She introduces herself as Lianna and tells them she wants to be an adventurer like them.

New Friends. One of the characters may agree to take Lianna as a squire and help her become an adventurer. She joins the party in any quests they do henceforth.

The only military building in the village has spears, lances, and weapon racks placed all around it.

If sent for help, Sir Raphael speaks with the characters here (see Adventure Hooks). Otherwise, it is unlikely that the characters meet him unless they participate and help the village when the goblins attack (see below).

Quest. Two days after the characters arrive, a war band of twenty goblins raids the village. Their target is to steal as much food as possible. They flee if their leader is de­feated or if their numbers are reduced by half.

Bruno is the local baker. He is a massive man that looks like a piece of bread. His products are so good that a wagon-worth of his bread is sent to the city weekly.

The characters’ actions in Respite Cove are judged at all times. Old Nellie is a retired, anointed knight, Sa­sha is a member of the clergy in disguise, and Sir Rap­ahel is second-in-command if something were to hap­pen to Derannia’s City Watch leader. If the heroes help the kind people of Respite Cove, important people in the capital shall know about them and their valiant deeds. 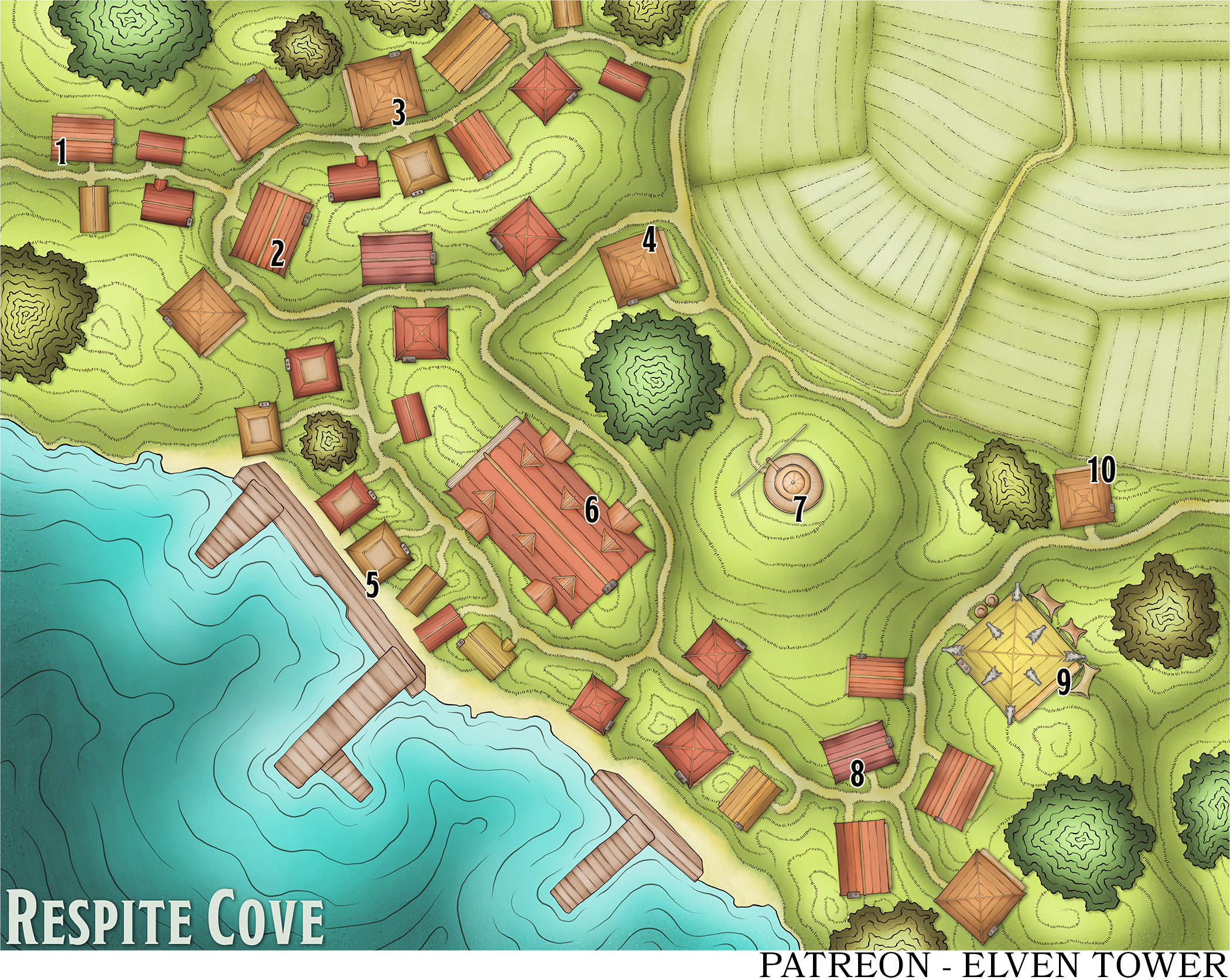