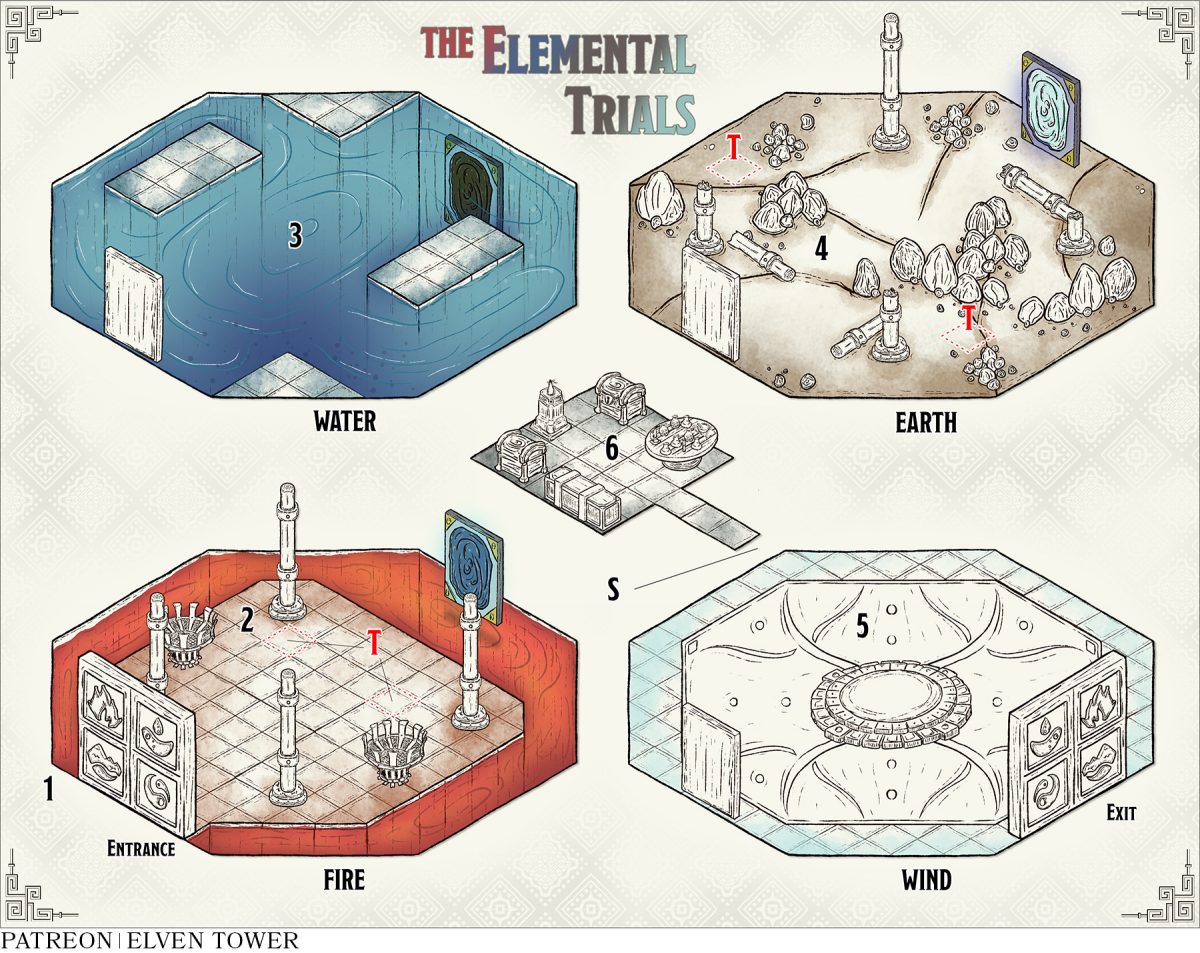 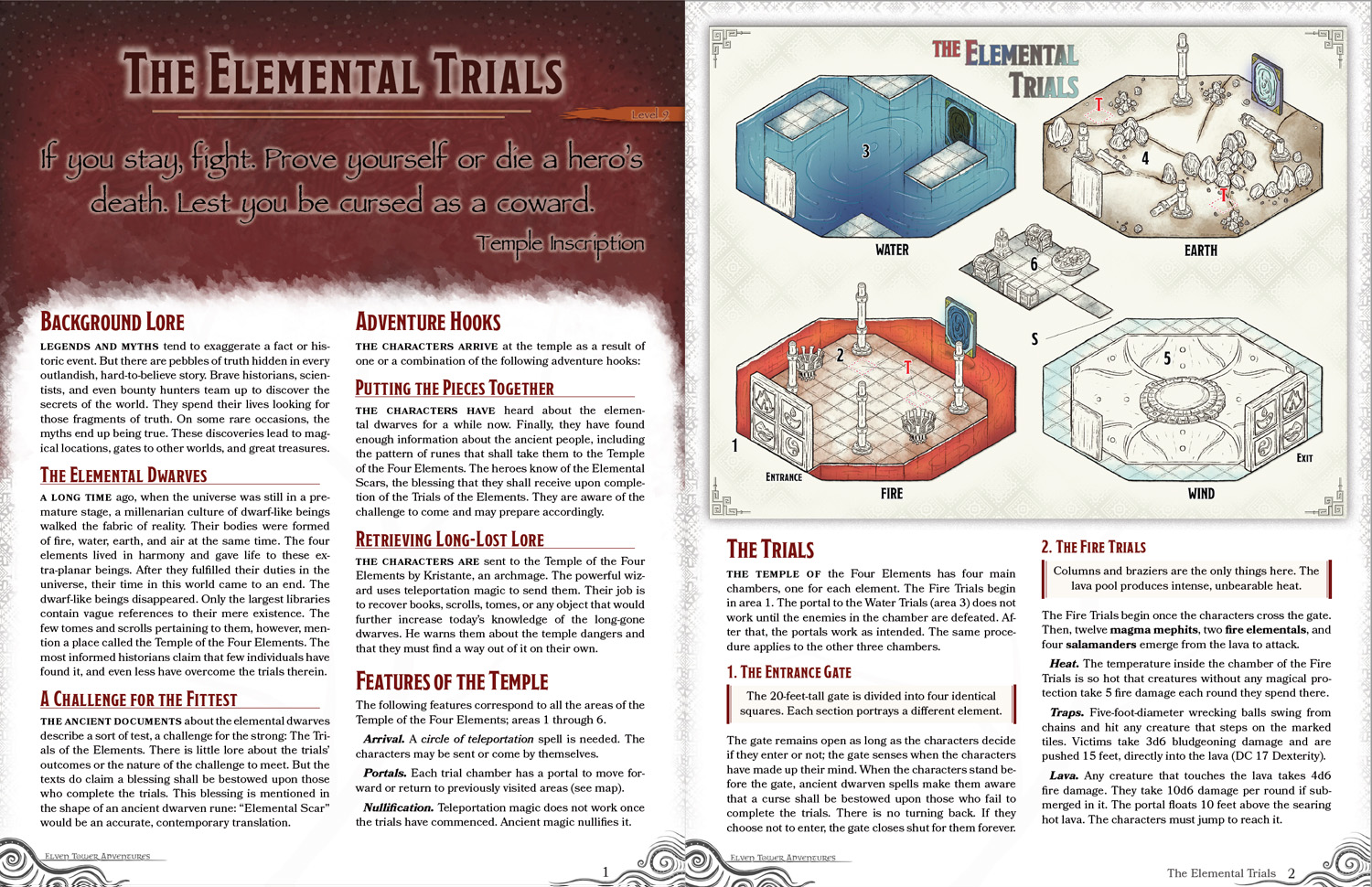 If you stay, fight. Prove yourself or die a hero’s death. Lest you be cursed as a coward.

Legends and myths tend to exaggerate a fact or his­toric event. But there are pebbles of truth hidden in every outlandish, hard-to-believe story. Brave historians, scien­tists, and even bounty hunters team up to discover the secrets of the world. They spend their lives looking for those fragments of truth. On some rare occasions, the myths end up being true. These discoveries lead to mag­ical locations, gates to other worlds, and great treasures.

Along time ago, when the universe was still in a pre­mature stage, a millenarian culture of dwarf-like beings walked the fabric of reality. Their bodies were formed of fire, water, earth, and air at the same time. The four elements lived in harmony and gave life to these ex­tra-planar beings. After they fulfilled their duties in the universe, their time in this world came to an end. The dwarf-like beings disappeared. Only the largest libraries contain vague references to their mere existence. The few tomes and scrolls pertaining to them, however, men­tion a place called the Temple of the Four Elements. The most informed historians claim that few individuals have found it, and even less have overcome the trials therein.

A Challenge for the Fittest

The ancient documents about the elemental dwarves describe a sort of test, a challenge for the strong: The Tri­als of the Elements. There is little lore about the trials’ outcomes or the nature of the challenge to meet. But the texts do claim a blessing shall be bestowed upon those who complete the trials. This blessing is mentioned in the shape of an ancient dwarven rune: “Elemental Scar” would be an accurate, contemporary translation.

The characters arrive at the temple as a result of one or a combination of the following adventure hooks:

Putting the Pieces Together

The characters have heard about the elemen­tal dwarves for a while now. Finally, they have found enough information about the ancient people, including the pattern of runes that shall take them to the Temple of the Four Elements. The heroes know of the Elemental Scars, the blessing that they shall receive upon comple­tion of the Trials of the Elements. They are aware of the challenge to come and may prepare accordingly.

The characters are sent to the Temple of the Four Elements by Kristante, an archmage. The powerful wiz­ard uses teleportation magic to send them. Their job is to recover books, scrolls, tomes, or any object that would further increase today’s knowledge of the long-gone dwarves. He warns them about the temple dangers and that they must find a way out of it on their own.

The following features correspond to all the areas of the Temple of the Four Elements; areas 1 through 6.

Arrival. A circle of teleportation spell is needed. The characters may be sent or come by themselves.

Portals. Each trial chamber has a portal to move for­ward or return to previously visited areas (see map).

Nullification. Teleportation magic does not work once the trials have commenced. Ancient magic nullifies it.

The Temple of the Four Elements has four main chambers, one for each element. The Fire Trials begin in area 1. The portal to the Water Trials (area 3) does not work until the enemies in the chamber are defeated. Af­ter that, the portals work as intended. The same proce­dure applies to the other three chambers.

The 20-feet-tall gate is divided into four identical squares. Each section portrays a different element.

The gate remains open as long as the characters decide if they enter or not; the gate senses when the characters have made up their mind. When the characters stand be­fore the gate, ancient dwarven spells make them aware that a curse shall be bestowed upon those who fail to complete the trials. There is no turning back. If they choose not to enter, the gate closes shut for them forever.

Columns and braziers are the only things here. The lava pool produces intense, unbearable heat.

The Fire Trials begin once the characters cross the gate. Then, twelve magma mephits, two fire elementals, and four salamanders emerge from the lava to attack.

Heat. The temperature inside the chamber of the Fire Trials is so hot that creatures without any magical pro­tection take 5 fire damage each round they spend there.

Traps. Five-foot-diameter wrecking balls swing from chains and hit any creature that steps on the marked tiles. Victims take 3d6 bludgeoning damage and are pushed 15 feet, directly into the lava (DC 17 Dexterity).

Lava. Any creature that touches the lava takes 4d6 fire damage. They take 10d6 damage per round if sub­merged in it. The portal floats 10 feet above the searing hot lava. The characters must jump to reach it.

Four stone platforms of different shapes are the only solid ground in a large pool of pitch-dark water.

When the characters cross the portal after the Fire Tri­als’ completion, they fall into the water. The Water Trials begin after they all touch the water. Three water elemen­tals attack while six water weirds lurk in the darkest depths. They remain invisible for 1 round.

Underwater Fight. The appropriate penalties must be applied to creatures that fight underwater without swim­ming speed. Drowning rules apply as well to creatures who cannot breathe underwater for prolonged periods.

Underwater Portal. Once the Water Trials are com­pleted, the characters must dive 15 ft. to the next portal.

Countless boulders and rocks cover the uneven ground of this chamber. Three out of four columns are partially destroyed; their remains strewn about.

When the characters cross the portal after the Water Tri­als’ completion, they appear here. After they all arrive, the ground starts shaking and rocks begin to fall.

The Earth Trials begin. One clay golem and two earth elementals unearth themselves and attack. These crea­tures are immune to the movement difficulty of the ter­rain and the damage from the falling pebbles and rocks.

Rock Slide. Hundreds of varied-sized rocks created by magic fall from the ceiling. The characters must suc­ceed in a DC 12 Dexterity saving throw each round they spend in this chamber. On a fail, they are hit by a falling rock and take 3d6 bludgeoning damage. The rocks stop falling after the Earth Trials are completed.

Dwarven Magic. The two marked tiles in this area (see map) hide pressure-sensitive plates that trigger a glyph of warding spell each. Any creature that steps on them is the target of a hold person spell (DC 19 Wisdom save).

A stone, magic circle dominates the center of this area. Below it, a massive, fancy, silk rug with a beautiful intricate pattern covers most of the floor.

The characters appear in this area after completing the Earth Trials. They must defeat five invisible stalkers and two air elementals to complete the elemental trials. They are immune to the strong winds in this chamber.

Strong Winds. Currents of strong winds push one of the characters at random each round. They are pushed 25 feet and knocked prone (DC 17 Dexterity save).

Completion. No portal appears after the Wind Tri­als. Instead, the magic circle glows. The dwarven mag­ic shall bless each of the characters (see Development).

To enter this chamber, the characters must find the push­able brick in area 5 (DC 17 Investigation). Two chests, a stone container, a wooden table with lots of alchemy par­aphernalia, and a displayer for a magic potion are here.

Treasure. There are 6,500 gp worth of expensive fab­rics, small jewelry, and several pieces of silverware. The stone container has a collection of scrolls, papers, and tomes about the elemental dwarves and their culture. This is Kristante’s bounty (see Adventure Hooks).

A Blessing or a Curse

The characters step on the magic circle one by one and choose one element. Once a day, they can summon an elemental of their chosen element to aid them in bat­tle. This ally lasts 1 round + half the PC’s level.

There can be a point where the characters consider surrendering and finding a way to escape the danger­ous trials. If this happens, the trials stop and they are teleported outside the temple. Being expelled this way grants permanent vulnerability to fire and ice damage. 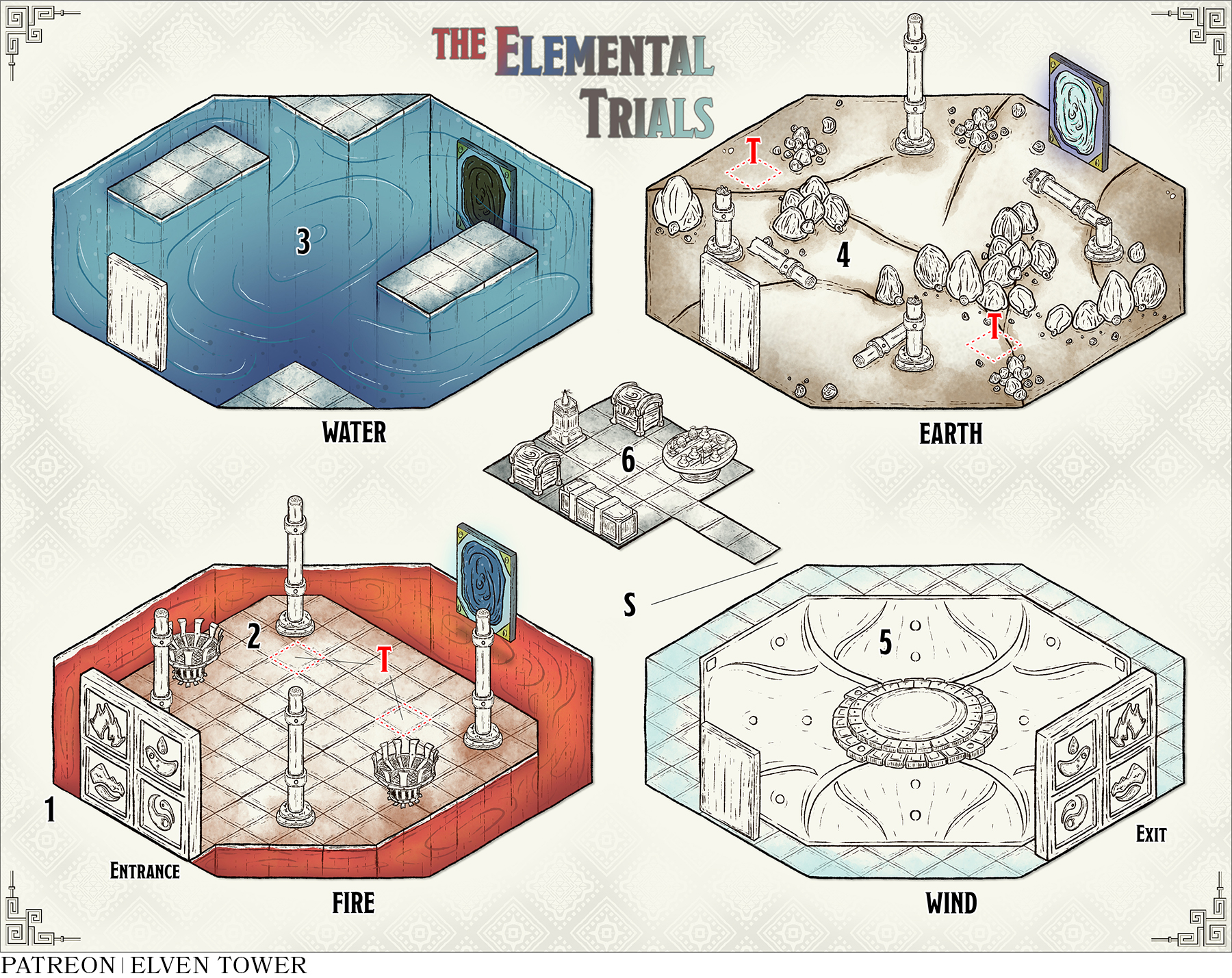