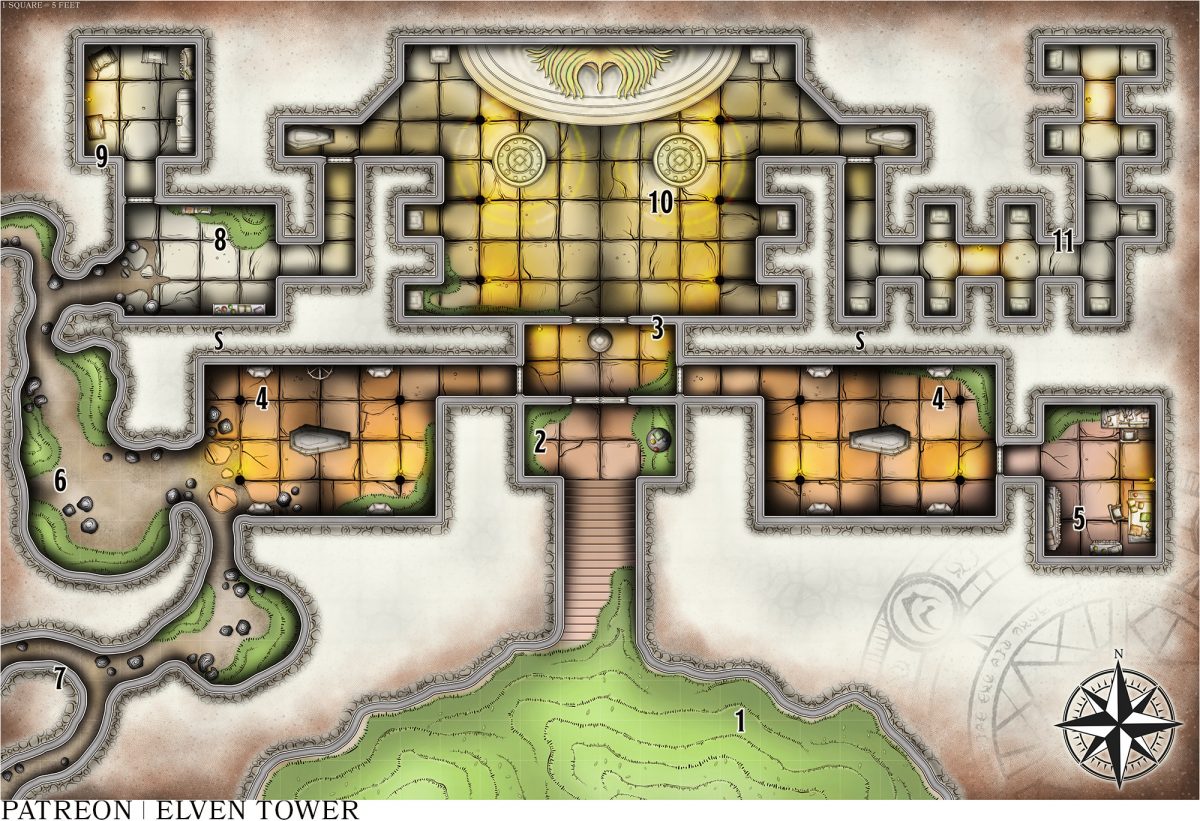 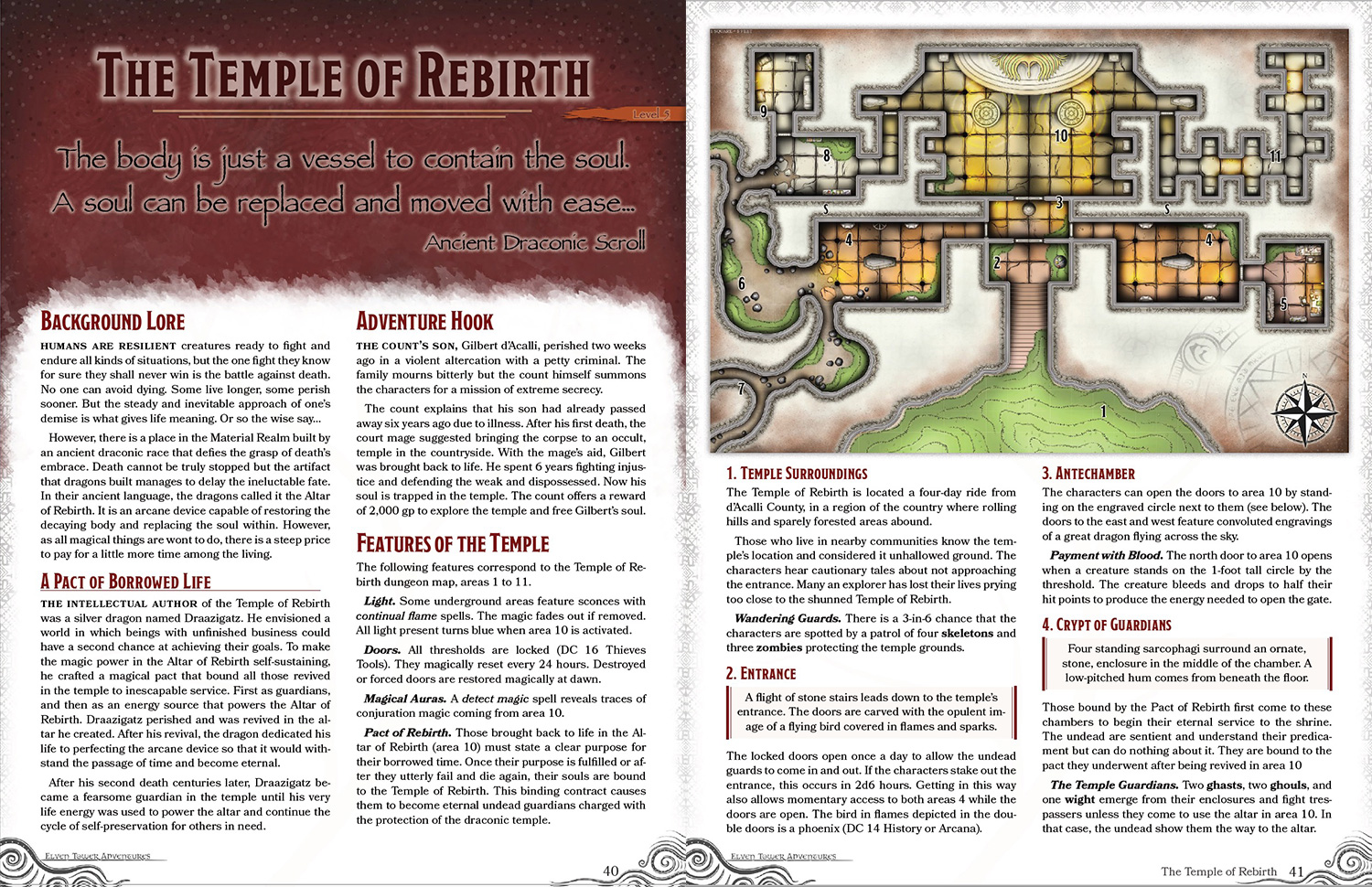 The body is just a vessel to contain the soul. A soul can be replaced and moved with ease…

Humans are resilient creatures ready to fight and endure all kinds of situations, but the one fight they know for sure they shall never win is the battle against death. No one can avoid dying. Some live longer, some perish sooner. But the steady and inevitable approach of one’s demise is what gives life meaning. Or so the wise say…

However, there is a place in the Material Realm built by an ancient draconic race that defies the grasp of death’s embrace. Death cannot be truly stopped but the artifact that dragons built manages to delay the ineluctable fate. In their ancient language, the dragons called it the Altar of Rebirth. It is an arcane device capable of restoring the decaying body and replacing the soul within. However, as all magical things are wont to do, there is a steep price to pay for a little more time among the living.

A Pact of Borrowed Life

The intellectual author of the Temple of Rebirth was a silver dragon named Draazigatz. He envisioned a world in which beings with unfinished business could have a second chance at achieving their goals. To make the magic power in the Altar of Rebirth self-sustaining, he crafted a magical pact that bound all those revived in the temple to inescapable service. First as guardians, and then as an energy source that powers the Altar of Rebirth. Draazigatz perished and was revived in the al­tar he created. After his revival, the dragon dedicated his life to perfecting the arcane device so that it would with­stand the passage of time and become eternal.

After his second death centuries later, Draazigatz be­came a fearsome guardian in the temple until his very life energy was used to power the altar and continue the cycle of self-preservation for others in need.

The count’s son, Gilbert d’Acalli, perished two weeks ago in a violent altercation with a petty criminal. The family mourns bitterly but the count himself summons the characters for a mission of extreme secrecy.

The count explains that his son had already passed away six years ago due to illness. After his first death, the court mage suggested bringing the corpse to an occult, temple in the countryside. With the mage’s aid, Gilbert was brought back to life. He spent 6 years fighting injus­tice and defending the weak and dispossessed. Now his soul is trapped in the temple. The count offers a reward of 2,000 gp to explore the temple and free Gilbert’s soul.

The following features correspond to the Temple of Re­birth dungeon map, areas 1 to 11.

Light. Some underground areas feature sconces with continual flame spells. The magic fades out if removed. All light present turns blue when area 10 is activated.

Doors. All thresholds are locked (DC 16 Thieves Tools). They magically reset every 24 hours. Destroyed or forced doors are restored magically at dawn.

Pact of Rebirth. Those brought back to life in the Al­tar of Rebirth (area 10) must state a clear purpose for their borrowed time. Once their purpose is fulfilled or af­ter they utterly fail and die again, their souls are bound to the Temple of Rebirth. This binding contract causes them to become eternal undead guardians charged with the protection of the draconic temple.

The Temple of Rebirth is located a four-day ride from d’Acalli County, in a region of the country where rolling hills and sparely forested areas abound.

Those who live in nearby communities know the tem­ple’s location and considered it unhallowed ground. The characters hear cautionary tales about not approaching the entrance. Many an explorer has lost their lives prying too close to the shunned Temple of Rebirth.

Wandering Guards. There is a 3-in-6 chance that the characters are spotted by a patrol of four skeletons and three zombies protecting the temple grounds.

A flight of stone stairs leads down to the temple’s entrance. The doors are carved with the opulent im­age of a flying bird covered in flames and sparks.

The locked doors open once a day to allow the undead guards to come in and out. If the characters stake out the entrance, this occurs in 2d6 hours. Getting in this way also allows momentary access to both areas 4 while the doors are open. The bird in flames depicted in the dou­ble doors is a phoenix (DC 14 History or Arcana).

The characters can open the doors to area 10 by stand­ing on the engraved circle next to them (see below). The doors to the east and west feature convoluted engravings of a great dragon flying across the sky.

Payment with Blood. The north door to area 10 opens when a creature stands on the 1-foot tall circle by the threshold. The creature bleeds and drops to half their hit points to produce the energy needed to open the gate.

Four standing sarcophagi surround an ornate, stone, enclosure in the middle of the chamber. A low-pitched hum comes from beneath the floor.

Those bound by the Pact of Rebirth first come to these chambers to begin their eternal service to the shrine. The undead are sentient and understand their predica­ment but can do nothing about it. They are bound to the pact they underwent after being revived in area 10

The Temple Guardians. Two ghasts, two ghouls, and one wight emerge from their enclosures and fight tres­passers unless they come to use the altar in area 10. In that case, the undead show them the way to the altar.

The warm room contains two working desks and a bookshelf packed to the brim with documents.

During his life extension, the dragon Draazigatz used his polymorphic ability to become human-sized and work on the archive. He created two invisible servants that work tirelessly here. The servants record the names and phys­ical descriptions of all that are brought for revival. The archive contains 846 entries that date back thousands of years. The servants reform after 24 hours if destroyed. They exist for as long as the altar is operational.

Treasure. The stone bookshelf contains 1,500 gp worth of silver figurines and trinkets. There are three po­tions of healing and one potion of resistance.

A tribe of nomad denizens of the Underworld dug their way into the Temple of Rebirth a few months ago. A few of their explorers delved into the temple but were driv­en off by the undead guardians. They settled down half a mile from the temple in a large network of cave tunnels.

Reptilian Spelunkers. When the characters explore the natural caverns, there is a 3-in-6 chance they run into a band of eight aggressive troglodyte scavengers.

The convoluted tunnel network reaches the troglodyte community before slanting downward to the hidden Un­derworld. The characters can access the abyss here.

A hunching, lone ghoul sits in a corner. Its leg is chained to a stone shelf. The partially collapsed chamber contains little else of value or interest.

Gilbert d’Acalli (ghoul) chained himself to the shelf to avoid attacking others when they visit the temple. Against his will, he tries to break free of the chain to at­tack the characters when they arrive but has no success.

Gilbert explains that a strong magical bond shall keep him here in service to the altar until there comes a time when his life force shall power the device itself. He is not happy with this outcome but he was aware of it when he was revived. The man is resigned to his grim fate.

The golden effigy of a great phoenix on a raised dais dominates the far end of the domed hall. Two or­nate magic circles glow before the flaming effigy

Placing the corpse of a creature on one of the circles ac­tivates the altar. The creature’s soul is aware of the bind­ing contract and must choose a purpose to dedicate its second life to. They have the freedom to refuse and re­main dead. Upon accepting, the corpse vanishes and the creature reappears alive in the second magic circle.

Altar Guardians. Two wraiths and four skeletons protect the altar and attack trespassers unless they have come to use the altar and revive a creature.

As the undead in the Crypts of Guardians grow weary and weak, their remains are magically moved to this buri­al place. This is the last step of their existence. When the altar is used, it uses the life energy of all stored here to bring life and create the binding Pact of Revival.

The characters reach the end of this adventure and face the consequences of their deeds. Gilbert d’Acalli is subject to the Pact of Revival and cannot be helped with­out destroying the altar itself. Such action causes all un­dead in the temple to be released from service. Their souls may rest in peace instead of being spent by the al­tar. Of course, the characters may find this course of ac­tion against their interest. Alas, they may one day need to use the Altar of Rebirth to revive one of their own. 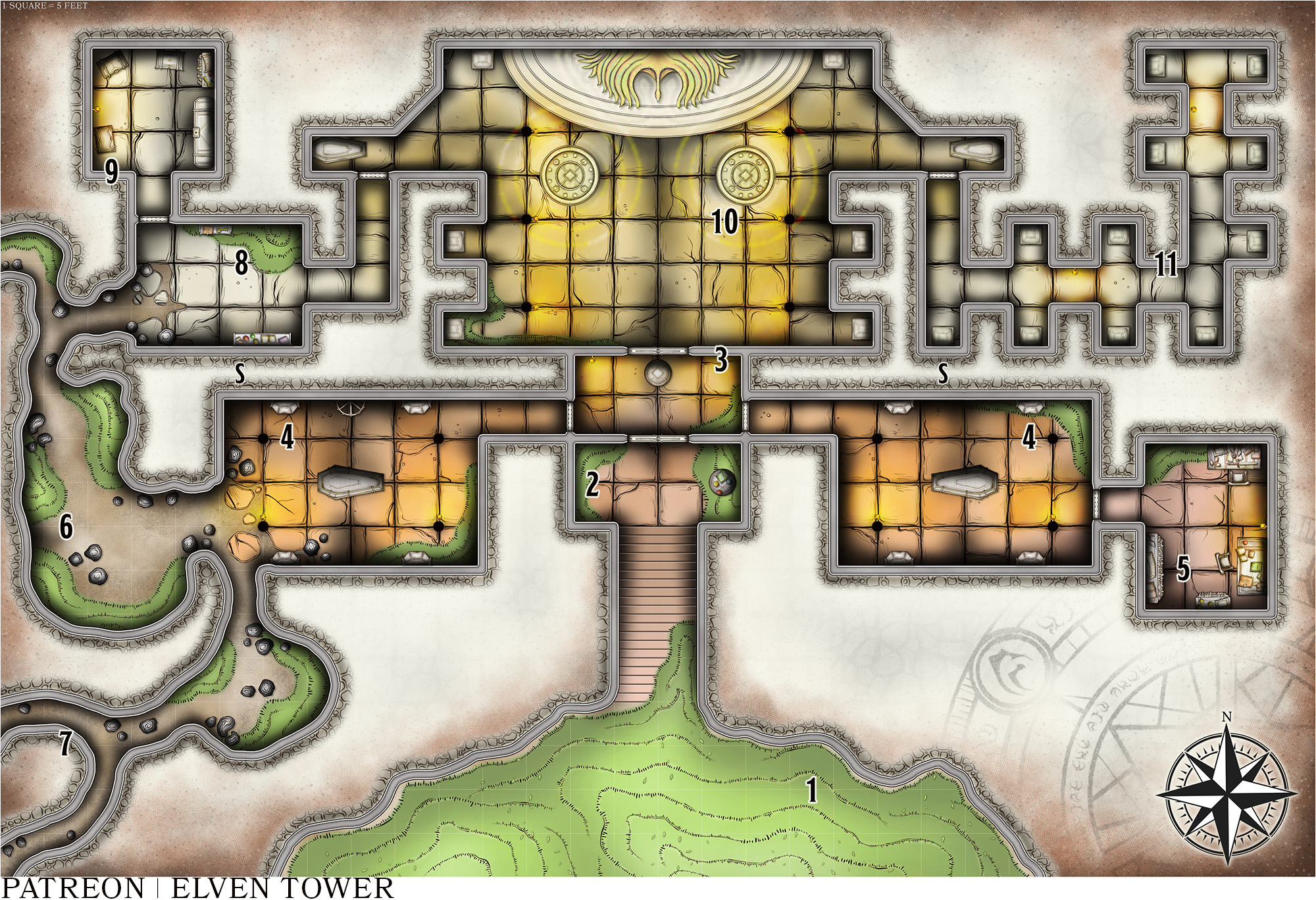