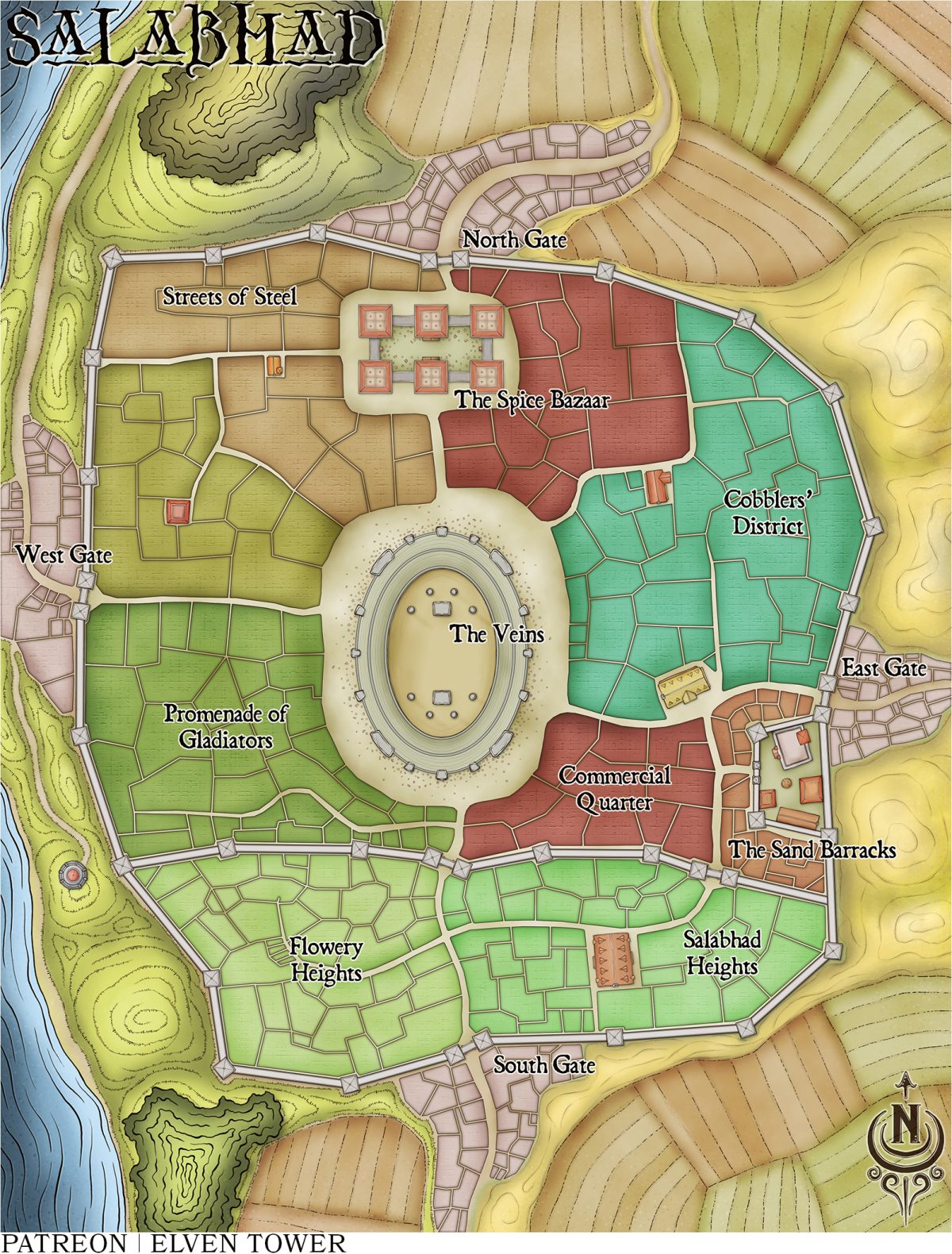 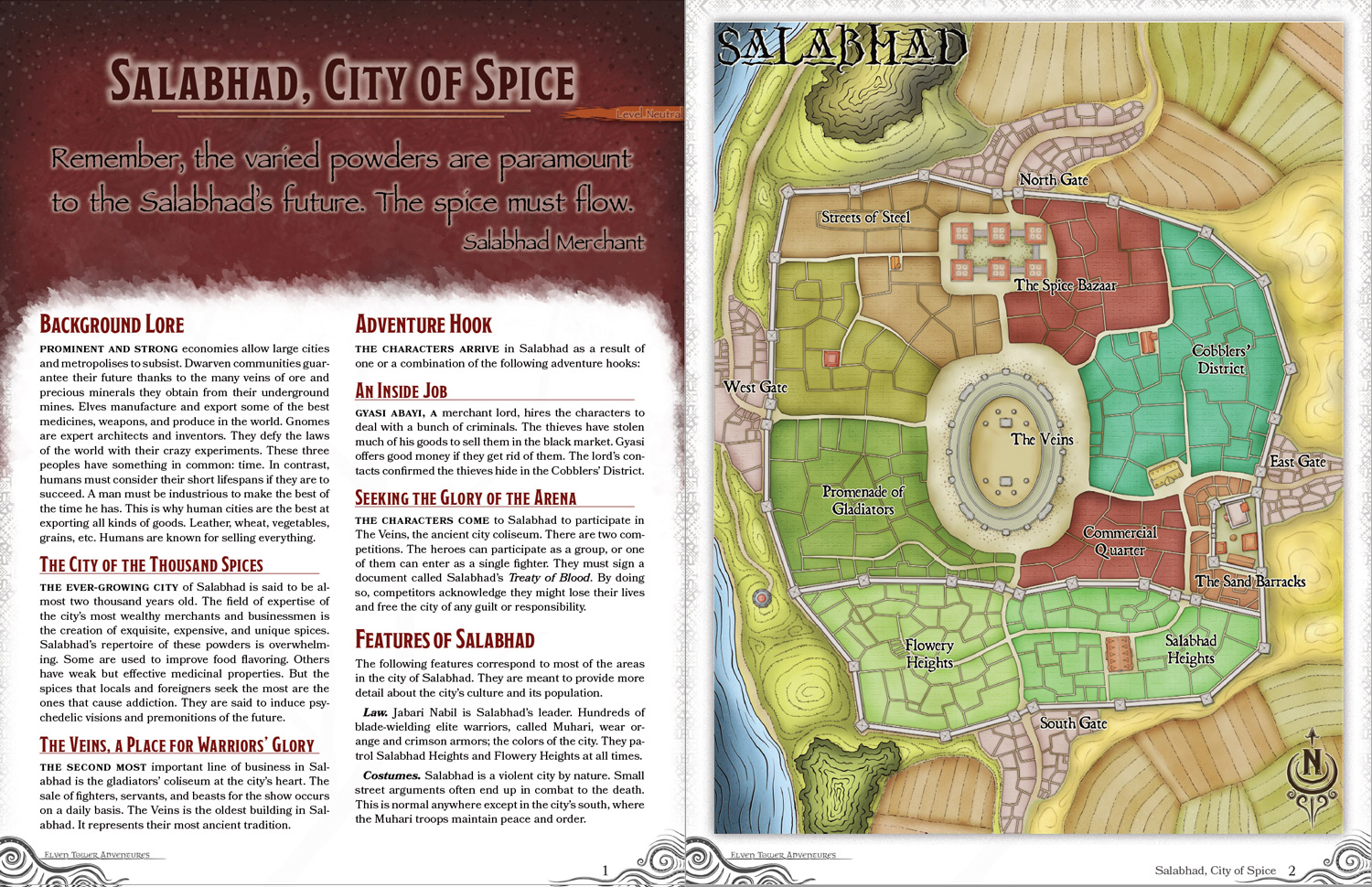 Remember, the varied powders are paramount to the Salabhad’s future. The spice must flow.

Prominent and strong economies allow large cities and metropolises to subsist. Dwarven communities guar­antee their future thanks to the many veins of ore and precious minerals they obtain from their underground mines. Elves manufacture and export some of the best medicines, weapons, and produce in the world. Gnomes are expert architects and inventors. They defy the laws of the world with their crazy experiments. These three peoples have something in common: time. In contrast, humans must consider their short lifespans if they are to succeed. A man must be industrious to make the best of the time he has. This is why human cities are the best at exporting all kinds of goods. Leather, wheat, vegetables, grains, etc. Humans are known for selling everything.

The City of the Thousand Spices

The ever-growing city of Salabhad is said to be al­most two thousand years old. The field of expertise of the city’s most wealthy merchants and businessmen is the creation of exquisite, expensive, and unique spices. Salabhad’s repertoire of these powders is overwhelm­ing. Some are used to improve food flavoring. Others have weak but effective medicinal properties. But the spices that locals and foreigners seek the most are the ones that cause addiction. They are said to induce psy­chedelic visions and premonitions of the future.

The Veins, a Place for Warriors’ Glory

The second most important line of business in Sal­abhad is the gladiators’ coliseum at the city’s heart. The sale of fighters, servants, and beasts for the show occurs on a daily basis. The Veins is the oldest building in Sal­abhad. It represents their most ancient tradition.

The characters arrive in Salabhad as a result of one or a combination of the following adventure hooks:

Gyasi Abayi, a merchant lord, hires the characters to deal with a bunch of criminals. The thieves have stolen much of his goods to sell them in the black market. Gyasi offers good money if they get rid of them. The lord’s con­tacts confirmed the thieves hide in the Cobblers’ District.

Seeking the Glory of the Arena

The characters come to Salabhad to participate in The Veins, the ancient city coliseum. There are two com­petitions. The heroes can participate as a group, or one of them can enter as a single fighter. They must sign a document called Salabhad’s Treaty of Blood. By doing so, competitors acknowledge they might lose their lives and free the city of any guilt or responsibility.

The following features correspond to most of the areas in the city of Salabhad. They are meant to provide more detail about the city’s culture and its population.

Law. Jabari Nabil is Salabhad’s leader. Hundreds of blade-wielding elite warriors, called Muhari, wear or­ange and crimson armors; the colors of the city. They pa­trol Salabhad Heights and Flowery Heights at all times.

Costumes. Salabhad is a violent city by nature. Small street arguments often end up in combat to the death. This is normal anywhere except in the city’s south, where the Muhari troops maintain peace and order.

Orange and crimson banners portray a black scorpi­on on a steel shield. A stone-carved sign that reads “Welcome to Salabhad, the City of Spice”.

All people must enter the city through the north, east, or west gates. The south gate, which connects directly to Salabhad Heights, is reserved for Jabari Nabil’s person­nel, Muhari guards, or the wealthiest residents.

City’s Protocol. Name and business within Salabhad must be stated at the gates. None shall enter before this. A group larger than 10 soldiers or warriors of any sort must leave their weapons at the gates until Muhari au­thorities interrogate them. It must be proven that their stay shall not disturb Jabari’s reign or the city’s peace.

The black scorpion of Salabhad decorates every corner of the barracks. Muhari in orange and crim­son armors come and go at every pathway.

A great deal of the city’s military force resides here. This is because the East Gate is the most accessible for visi­tors. However, Sand Garrisons are scattered throughout the city. They are small watchtowers with a guard or two.

City’s Protocol. The barracks have a prison. Criminals and disturbers-of-peace are brought here for interroga­tion. Jabari Nabil has the final word regarding each de­tainee. Most are sentenced to fight for their lives at the arena. Nine out of ten die promptly. However, some of the arena’s best warriors were born this way. Salabhad respects strength. It is not uncommon for gladiators to earn their freedom0. Everything is possible at the Veins.

The countless stands and hundreds of voices are nothing compared to the million aromas, odors, and exotic scents of the Spice Bazaar.

Almost half of the spice bazaar belongs to Gyasi Abayi, a merchant lord. If the characters accept to work for him, half the vendors here bow to them when they pass.

Spice. The characters can obtain spices for food, for medicinal purposes, or to make a place smell good. The addictive kind is not sold to the public at the bazaar.

Salabhad specializes in spices and steel weaponry. Vis­itors can obtain common supplies and rations in these less-crowded streets. The sale of spice is forbidden here.

The heart of Salabhad, where many have witnessed heroic, epic battles. The many tents around it are tiny beside the prominent walls of the coliseum.

The city’s coliseum offers events almost every day. There are a few local legends that fight once a week or so. Some people claim a gladiator named Apossyus earned his freedom two years ago. However, his love for battle and glory was such, that he keeps fighting to the day.

Possible Quest. If the characters come to Salabhad to participate in the great arena’s events, they must choose one of two options. Participate as a team and fight a se­ries of deadly encounters against monsters. Or enroll as a single fighter, who must defeat a series of skilled gladi­ators and earn the right to face the champion, Apossyus. Either way, the rules and the general characteristics of these encounters are left to the GM’s discretion.

Not all the people here are shoe-makers, but the entire district earned this name because hundreds of years ago, cobblers were all there was. The name stuck, despite a few weak city’s efforts to change it through the years.

Spice Thieves. The characters must come to this dis­trict to find the people that have been stealing Gyasi’s merchandise. The thieves are well-armed and defend the stolen goods with courage. They flee if the charac­ters manage to outnumber them or defeat their leader in combat. The encounter is left to the GM’s discretion to account for the average party level.

Sanded stone and high-quality architecture dec­orate the streets of this quarter. The banners, the walls, and the streets are clean and well-guarded.

Jabari Nabil is demanding and quite a perfectionist. The city leader has many loyal subjects working full-time solely on cleaning duties. It must be impeccable.

Reputation. The characters may draw the attention of Jabari Nabil if their involvement with the merchant lord Gyasi is successful. Likewise, their participation at the arena might please Jabari, who rarely misses the shows.

This is the second-best place to live in Salabhad. Many merchant lords and Jabari’s distant relatives reside here. This district owes its name to the floral scents that fol­low each of its residents. They permeate the area.

The district’s dirt roads display blood stains and signs of battle at every corner. Strong warriors pass­ing by brandish crests and sigils of different colors.

All participants of The Veins must have a symbol, a crest that identifies them. It is painted on their armor, shields, or bare skin if needed. This quarter features several glad­iator schools called Ludus. There is a large web of local competition, business, and even gladiator trade within the streets of the Promenade of Gladiators.

Seeking Glory. The characters must enroll and orga­nize here if they are to participate in the arena. They must paint the armor or the participant with the colors of their choice and their sigil or crest before fighting.

The smell of fire and molten metal fills the streets of this quarter. Salabhad’s popular forges are here.

This district earned its name because numerous streets are full to the brim with stands displaying swords, hal­berds, spears, and shields. Everything shines under the rays of the heavy desert sun, making it difficult to see. It seems as if the roads were made of pure steel.

The Spice Must Flow

If the characters chase out the thieves and recover the merchant lord’s goods, he pays them the agreed-up­on amount and writes a letter of recommendation for them. Gyasi is one of Jabari’s closest friends. The lead­er of Salabhad may have a more important quest for the characters, now that they have shown their worth…

The Fate of a Gladiator

If the characters participate in the arena, there may be two possible outcomes. Depending on the fights.

A New Champion. The characters (or the single fight­er) become the new champions after overcoming the challenges at The Veins. They are invited to stay and par­ticipate again after receiving a bountiful reward.

A Pending Debt. The characters are defeated in the arena. They may plea for mercy before receiving the final blow, though. Jabari sentences them to be gladiators of a local Ludus as punishment. They may plan their escape or decide to earn their freedom with their fighting prow­ess. Either way, that is an adventure for another time… 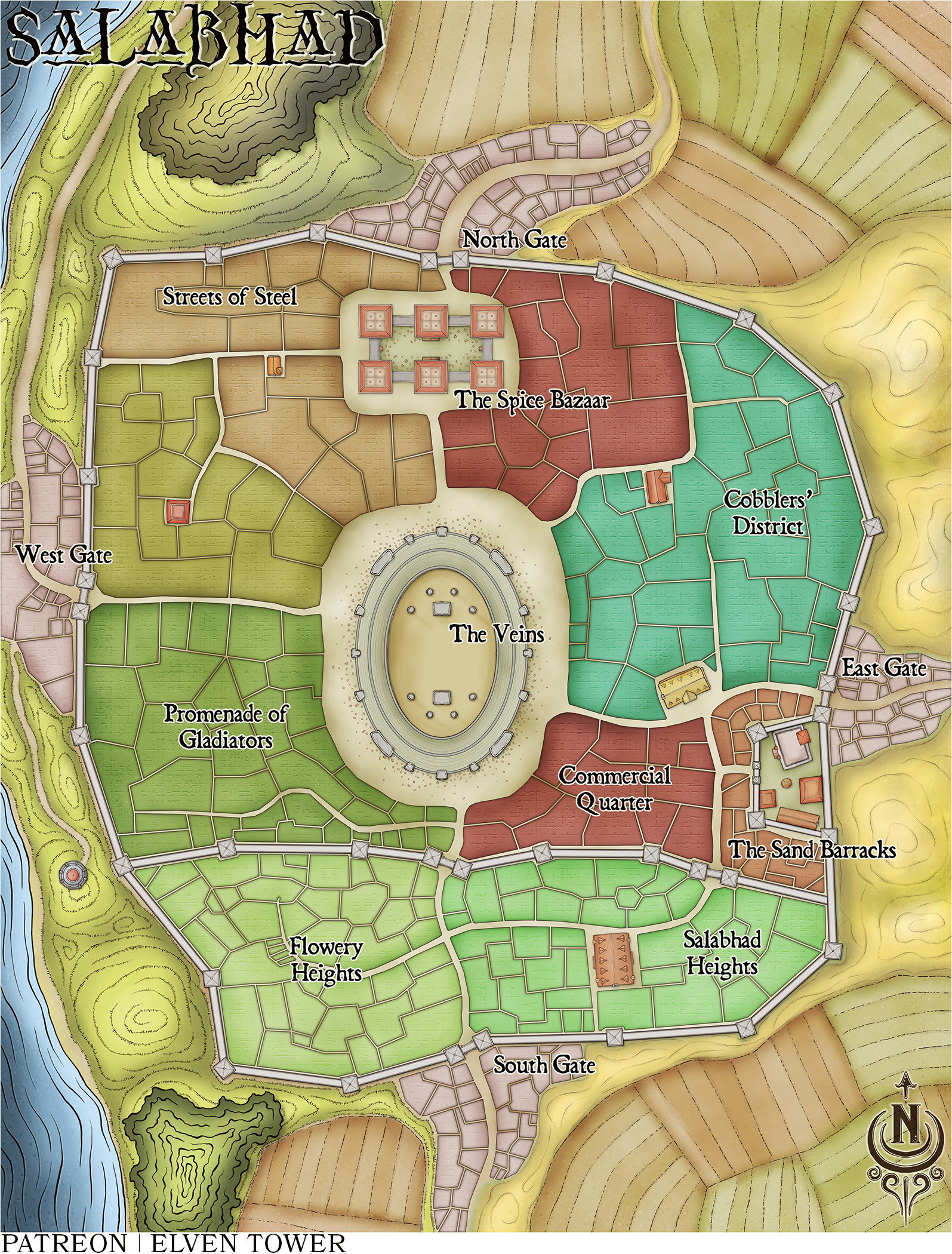