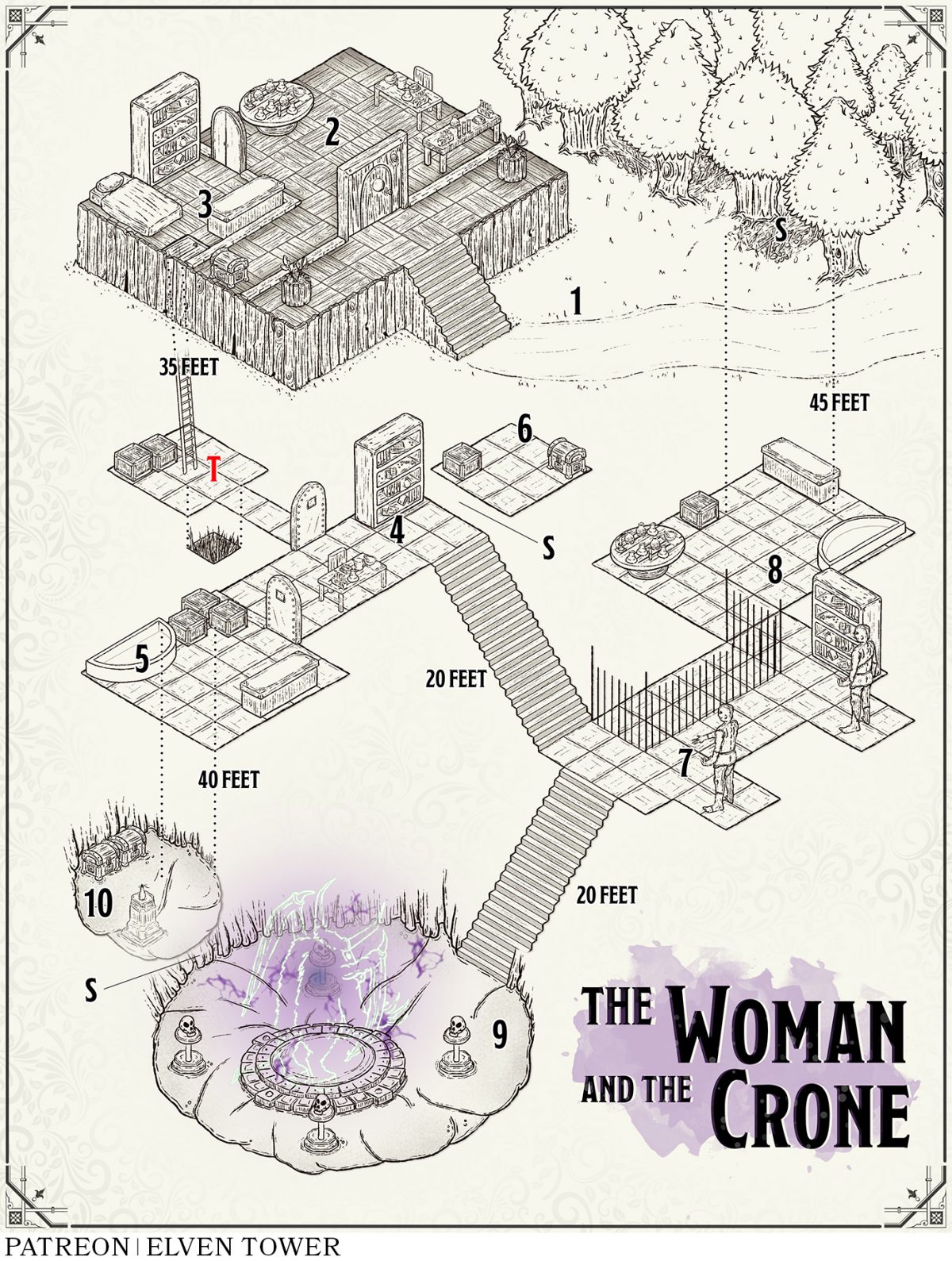 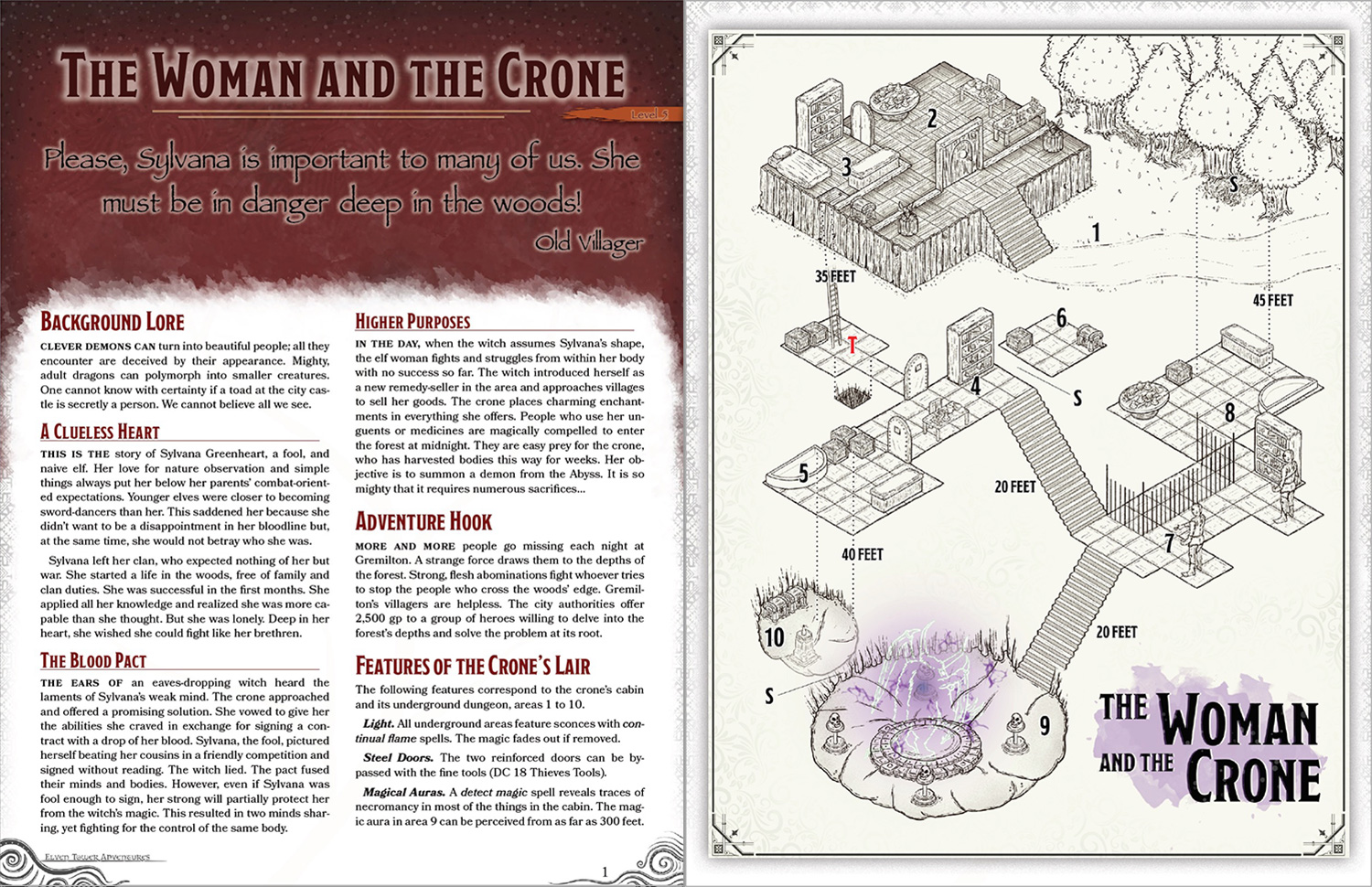 Please, Sylvana is important to many of us. She must be in danger deep in the woods!

Clever demons can turn into beautiful people; all they encounter are deceived by their appearance. Mighty, adult dragons can polymorph into smaller creatures. One cannot know with certainty if a toad at the city cas­tle is secretly a person. We cannot believe all we see.

This is the story of Sylvana Greenheart, a fool, and naive elf. Her love for nature observation and simple things always put her below her parents’ combat-orient­ed expectations. Younger elves were closer to becoming sword-dancers than her. This saddened her because she didn’t want to be a disappointment in her bloodline but, at the same time, she would not betray who she was.

Sylvana left her clan, who expected nothing of her but war. She started a life in the woods, free of family and clan duties. She was successful in the first months. She applied all her knowledge and realized she was more ca­pable than she thought. But she was lonely. Deep in her heart, she wished she could fight like her brethren.

The ears of an eaves-dropping witch heard the laments of Sylvana’s weak mind. The crone approached and offered a promising solution. She vowed to give her the abilities she craved in exchange for signing a con­tract with a drop of her blood. Sylvana, the fool, pictured herself beating her cousins in a friendly competition and signed without reading. The witch lied. The pact fused their minds and bodies. However, even if Sylvana was fool enough to sign, her strong will partially protect her from the witch’s magic. This resulted in two minds shar­ing, yet fighting for the control of the same body.

In the day, when the witch assumes Sylvana’s shape, the elf woman fights and struggles from within her body with no success so far. The witch introduced herself as a new remedy-seller in the area and approaches villages to sell her goods. The crone places charming enchant­ments in everything she offers. People who use her un­guents or medicines are magically compelled to enter the forest at midnight. They are easy prey for the crone, who has harvested bodies this way for weeks. Her ob­jective is to summon a demon from the Abyss. It is so mighty that it requires numerous sacrifices…

More and more people go missing each night at Gremilton. A strange force draws them to the depths of the forest. Strong, flesh abominations fight whoever tries to stop the people who cross the woods’ edge. Gremil­ton’s villagers are helpless. The city authorities offer 2,500 gp to a group of heroes willing to delve into the forest’s depths and solve the problem at its root.

Features of the Crone’s Lair

The following features correspond to the crone’s cabin and its underground dungeon, areas 1 to 10.

Light. All underground areas feature sconces with con­tinual flame spells. The magic fades out if removed.

Steel Doors. The two reinforced doors can be by­passed with the fine tools (DC 18 Thieves Tools).

Magical Auras. A detect magic spell reveals traces of necromancy in most of the things in the cabin. The mag­ic aura in area 9 can be perceived from as far as 300 feet.

1. Road to the Cabin

The characters travel through the forest for eight hours. It is not hard to follow Gremilton villagers’ instructions and reach the cabin in the deep woods.

If the characters approach the cabin, Sylvana (night hag) greets them from the inside: “Hello! One second please”. The woman treats visitors as customers. She denies any accusations or talks of witches; she claims to know nothing of the missing people if asked. A detect evil and good spell reveals the truth, though. If threat­ened, the witch repositions with Etherealness. Sylvana manages to scream “Help me!” during this exchange.

Hidden Access. An entrance to the dungeon is hidden by leaves and twigs (DC 18 Investigation). The witch’s flesh golems help her climb with their large limbs.

Hundreds of ingredients rest in flasks, boxes, and other containers. A strong smell of flowers and herbal scents permeates the wooden cabin.

The cabin’s interior looks like a commonplace herbalist’s shop. There are all kinds of herbs and ingredients.

Trap. The chest shoots poison darts when opened. Tar­gets take 4d6 poison damage and are poisoned for one hour (DC 16 Constitution). It contains nothing of value.

The room contains a single bed with a wooden shelf and a container. The trapdoor by the bed descends 35 feet.

Treasure. If the characters search the room, they find two potions of healing and a level 1 wizard spell scroll.

A table and wooden shelf are filled with rare, alchemy components for necromancy and witchcraft.

Spikes. Creatures that step on the pressure-sensitive plate fall 10 feet and get impaled in the spiked pit. They take 6d6 piercing damage (DC 15 Dexterity / half).

The stone font with clear, fresh water by the wall is surrounded by sturdy, wooden crates.

If the characters search this area, they find the open­ing underneath the crates (DC 16 Investigation). The 40-feet-descent leads to a secret cave (area 10).

Font. The witch poisoned the water with witchcraft. A detect magic spell reveals healing properties but drink­ers are poisoned for 1 hour (DC 16 Constitution).

The characters must find the pushable brick by the shelf in area 4 to find this place (DC 17 Investigation).

Treasure. The wooden chest and crate contain 2,500 gp worth of silverware and small precious stones. There are three potions of greater healing and a +1 dagger.

7. Guardians of the Cell

Two massive, malformed humanoids of stitched flesh stand with their fist closed as if waiting for in­structions. People within the cell weep before them.

The characters find the witch here if they enter the dun­geon from area 1. If they confront her in area 1, she flees here to fight alongside her automaton guardians. The witch (night hag) and two flesh golems prevent the char­acters from reaching the stairs that descend area 9. The witch retreats to the ritual chamber (area 9) to use her last resort if she is unable to stop the characters here.

Prisoners. The eight people trapped in the cell are too afraid and terrorized to speak, fight, or help in any way.

The guardians help the witch climb the 45-feet-deep hole. The crates and table here hold black magic and necromancy components. They are worth 500 gp.

Water. Use the description for the font in area 5.

Skulls on plinths surround a stone magic circle. The fabric of reality fights to maintain substance. The horns, wings, and face of a demon coalesce…

The witch needs a few more souls to summon the de­mon. She makes her last stand here and summons four shadows to help her protect the portal. Again, the witch won’t risk her life if things go sour (see Development).

The Demon’s Will. The evil entity is aware of its sur­roundings and wishes the witch’s success, so it helps. Each round, the demon can cast dispel magic at a target of its choice or: Melee Weapon Attack: +9 to hit, reach 10 ft., one target. Hit: 2d10 + 5 bludgeoning damage.

Removing some rocks and rubble from a section of the walls of the cave reveals this place (DC 18 Investigation).

Treasure. A stone pedestal holds a single vial of oil of etherealness, the wooden chests contain 4,500 gp, a por­table hole, a wand of web, and a crystal ball.

The Demon is Released

If the witch is defeated, she assumes Sylvana’s shape and begs for mercy. The real Sylvana cuts her off mid-sen­tence and manages to say “Don’t believe her!” but the witch silences her. The crone wants to make the charac­ters doubt and lay down their weapons. If she succeeds and catches them off-guard, she cuts her own throat and surrenders her life to the demon; anything to see the he­roes die. Free of its planar bindings, a glabrezu emerg­es. The characters may fight or escape. The witch is gone but so is Sylvana. Gremilton has a bigger problem now…

The Witch is Defeated

The characters do not buy the witch’s lies. A remove curse spell draws the witch out of the elf woman’s body and cures her. Gremilton and all neighboring towns are saved. The characters earn their reward and become friends with Sylvana’s clan even if she does not return. 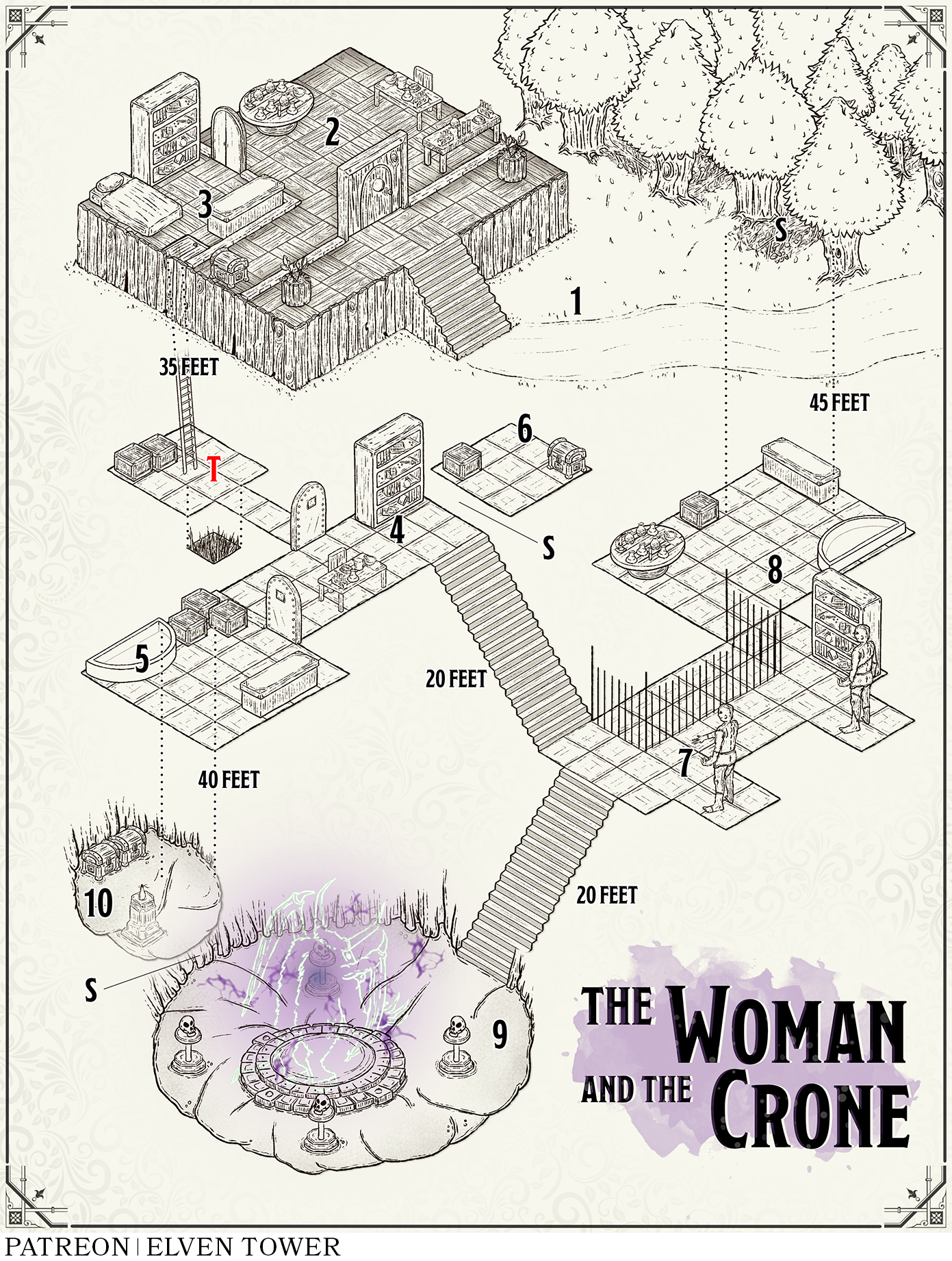