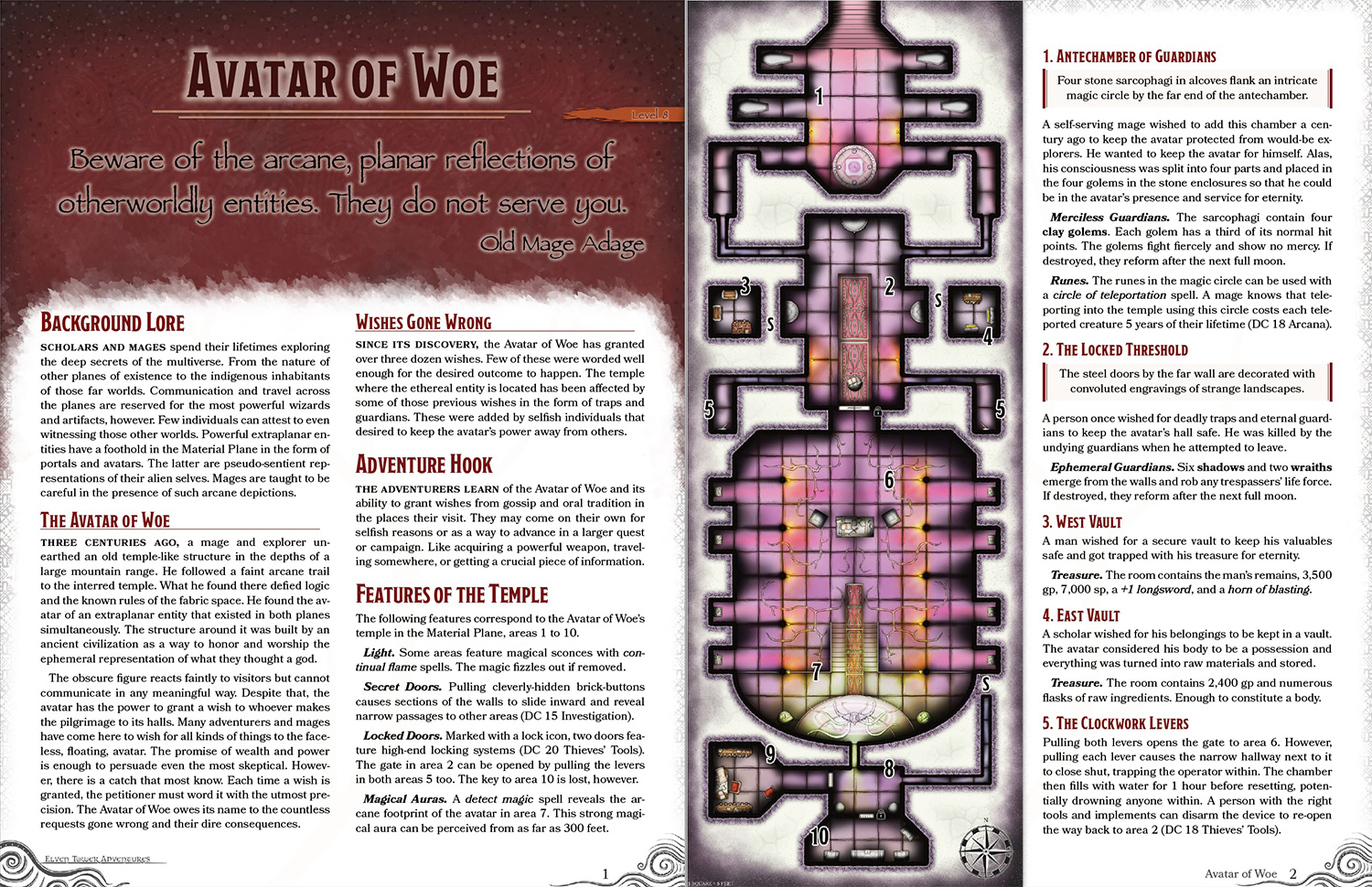 Beware of the arcane, planar reflections of otherworldly entities. They do not serve you.

Scholar sand mages spend their lifetimes exploring the deep secrets of the multiverse. From the nature of other planes of existence to the indigenous inhabitants of those far worlds. Communication and travel across the planes are reserved for the most powerful wizards and artifacts, however. Few individuals can attest to even witnessing those other worlds. Powerful extraplanar en­tities have a foothold in the Material Plane in the form of portals and avatars. The latter are pseudo-sentient rep­resentations of their alien selves. Mages are taught to be careful in the presence of such arcane depictions.

The Avatar of Woe

Three centuries ago, a mage and explorer un­earthed an old temple-like structure in the depths of a large mountain range. He followed a faint arcane trail to the interred temple. What he found there defied logic and the known rules of the fabric space. He found the av­atar of an extraplanar entity that existed in both planes simultaneously. The structure around it was built by an ancient civilization as a way to honor and worship the ephemeral representation of what they thought a god.

The obscure figure reacts faintly to visitors but cannot communicate in any meaningful way. Despite that, the avatar has the power to grant a wish to whoever makes the pilgrimage to its halls. Many adventurers and mages have come here to wish for all kinds of things to the face­less, floating, avatar. The promise of wealth and power is enough to persuade even the most skeptical. Howev­er, there is a catch that most know. Each time a wish is granted, the petitioner must word it with the utmost pre­cision. The Avatar of Woe owes its name to the countless requests gone wrong and their dire consequences.

Since its discovery, the Avatar of Woe has granted over three dozen wishes. Few of these were worded well enough for the desired outcome to happen. The temple where the ethereal entity is located has been affected by some of those previous wishes in the form of traps and guardians. These were added by selfish individuals that desired to keep the avatar’s power away from others.

The adventurers learn of the Avatar of Woe and its ability to grant wishes from gossip and oral tradition in the places their visit. They may come on their own for selfish reasons or as a way to advance in a larger quest or campaign. Like acquiring a powerful weapon, travel­ing somewhere, or getting a crucial piece of information.

The following features correspond to the Avatar of Woe’s temple in the Material Plane, areas 1 to 10.

Light. Some areas feature magical sconces with con­tinual flame spells. The magic fizzles out if removed.

Locked Doors. Marked with a lock icon, two doors fea­ture high-end locking systems (DC 20 Thieves’ Tools). The gate in area 2 can be opened by pulling the levers in both areas 5 too. The key to area 10 is lost, however.

Magical Auras. A detect magic spell reveals the ar­cane footprint of the avatar in area 7. This strong magi­cal aura can be perceived from as far as 300 feet.

Four stone sarcophagi in alcoves flank an intricate magic circle by the far end of the antechamber.

A self-serving mage wished to add this chamber a cen­tury ago to keep the avatar protected from would-be ex­plorers. He wanted to keep the avatar for himself. Alas, his consciousness was split into four parts and placed in the four golems in the stone enclosures so that he could be in the avatar’s presence and service for eternity.

Merciless Guardians. The sarcophagi contain four clay golems. Each golem has a third of its normal hit points. The golems fight fiercely and show no mercy. If destroyed, they reform after the next full moon.

Runes. The runes in the magic circle can be used with a circle of teleportation spell. A mage knows that tele­porting into the temple using this circle costs each tele­ported creature 5 years of their lifetime (DC 18 Arcana).

The steel doors by the far wall are decorated with convoluted engravings of strange landscapes.

A person once wished for deadly traps and eternal guard­ians to keep the avatar’s hall safe. He was killed by the undying guardians when he attempted to leave.

Ephemeral Guardians. Six shadows and two wraiths emerge from the walls and rob any trespassers’ life force. If destroyed, they reform after the next full moon.

A man wished for a secure vault to keep his valuables safe and got trapped with his treasure for eternity.

A scholar wished for his belongings to be kept in a vault. The avatar considered his body to be a possession and everything was turned into raw materials and stored.

Treasure. The room contains 2,400 gp and numerous flasks of raw ingredients. Enough to constitute a body.

Pulling both levers opens the gate to area 6. However, pulling each lever causes the narrow hallway next to it to close shut, trapping the operator within. The chamber then fills with water for 1 hour before resetting, poten­tially drowning anyone within. A person with the right tools and implements can disarm the device to re-open the way back to area 2 (DC 18 Thieves’ Tools).

6. The Great Hall of Woe

A glowing, 15-foot-tall sculpture of a faceless hu­manoid with eight tentacles floats by the far end of the hall. Its eyeless gaze causes deep discomfort and commands the attention of all creatures.

Eight funerary plinths in alcoves to the east and west bear the bodily remains of those who built this hall thou­sands of years ago. They considered themselves the progeny and most loyal followers of the ethereal avatar.

Surrogate Progeny. Six wights reform from the an­cient remains and challenge any trespasser to a fight to the death. The undead are sentient and allow anyone to step back and abandon the temple forever. No one can make a petition to the avatar before dealing with them. If destroyed, they reform after the next full moon.

7. The Avatar of Woe

The strange entity is immune to all damage and magic from the Material Plane. Creatures coming within 5 feet of the quasi-living, floating statue take 10d6 radiant dam­age per round. A creature can make a wish to the Avatar of Woe once per year (see Development). To request a wish, the petitioner must stand behind the stone table in area 6 and word their wish. They only have one shot at precisely stating whatever it is they desire. The Avatar of Woe acknowledges a wish with a faint, respectful nod.

The backroom can be reached from the secret passage or by a narrow way behind the avatar. However, anyone crossing it takes radiant damage from the avatar.

A detect magic spell reveals an abjuration aura that pro­tects this chamber from the passage of time. The archive contains literature and journals of the ancient civiliza­tion that first interacted with the Avatar of Woe. Spend­ing 1 hour reviewing the documents reveals that they were a mix of elves and humans. The ancients revered the avatar and formed a religion around its worship.

There are accurate accounts of people who wished for all kinds of things. They had their words twisted out of their original meaning. These people knew that the Ava­tar of Woe had to be treated with respect. They believed one should think carefully before putting their trust and their livelihood in the avatar’s hands. Many perished or saw their lives ruined by their greed and overconfidence.

The temple visitors didn’t dare touch the treasure here. They wrongly believed the Avatar of Woe would retaliate.

The characters reach the end of this adventure and face the consequences of their deeds. Each character and NPC present is free to ask the Avatar of Woe for something. It works like a wish spell but the avatar is bound to twist their words to the worst interpretation. All wishes come with a terrible drawback but the players can ameliorate the outcome by carefully wording their desires. A badly-worded wish to the Avatar of Woe may well cause the end of someone’s adventuring career.