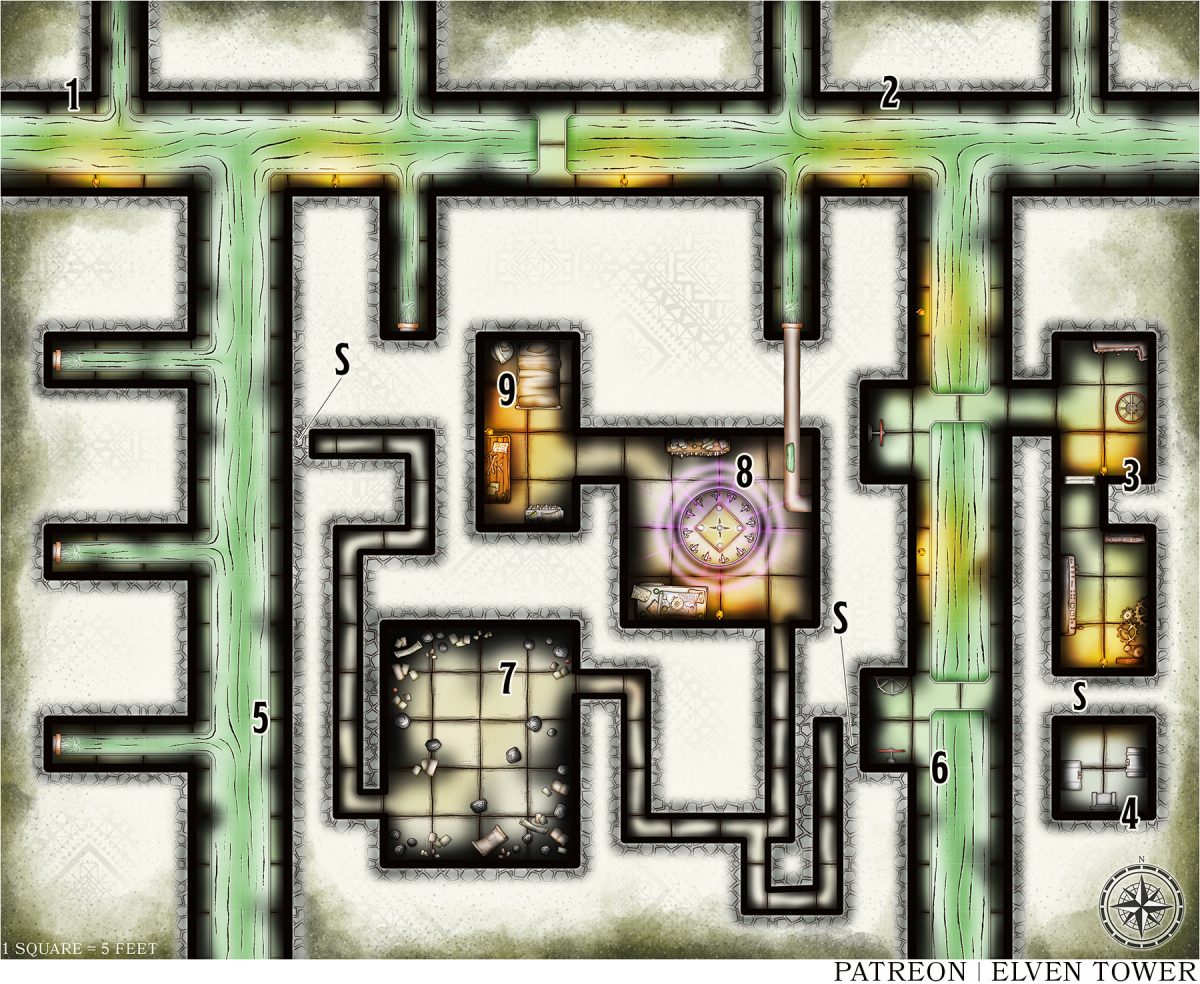 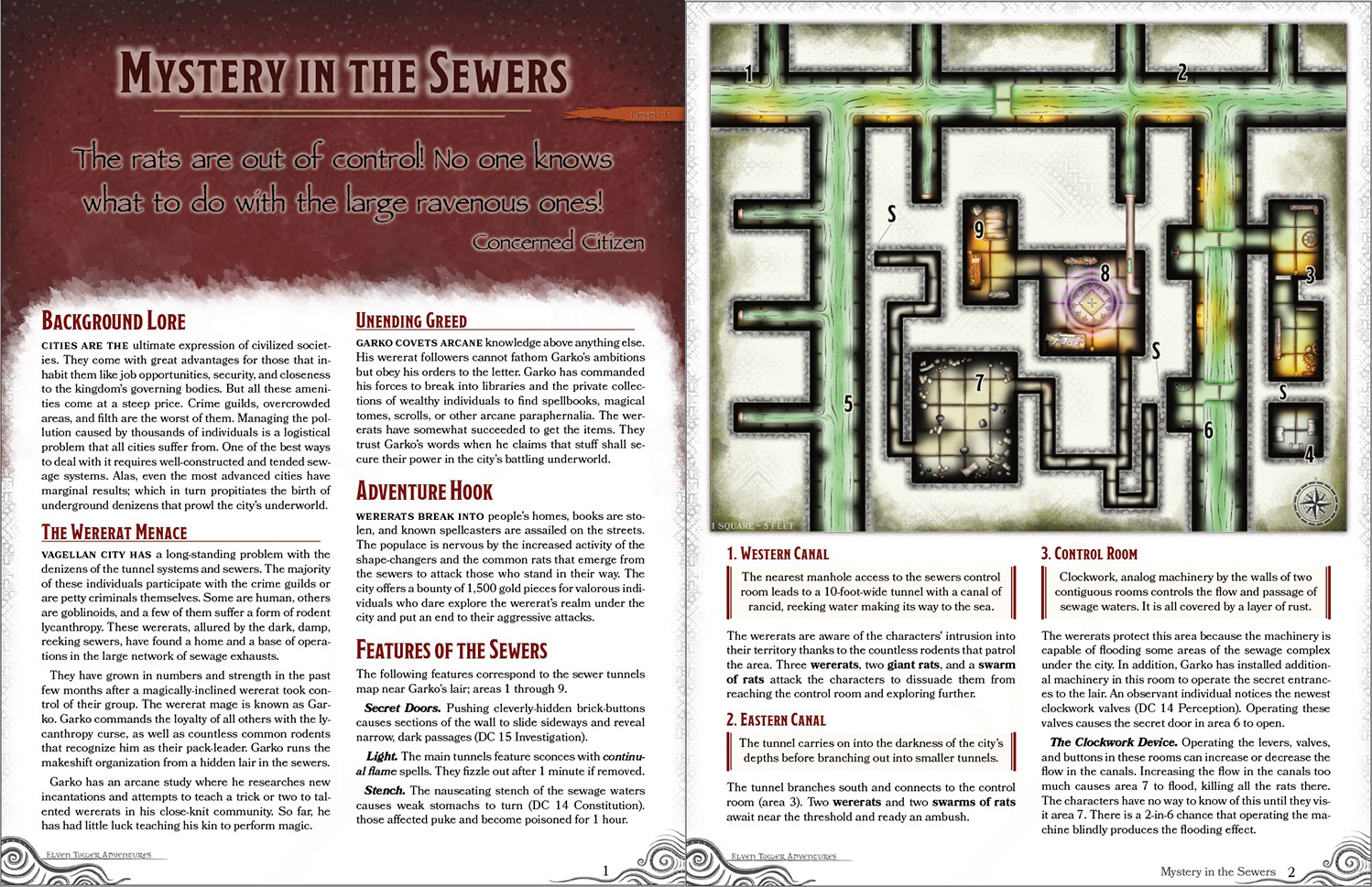 The rats are out of control! No one knows what to do with the large ravenous ones!

Cities are the ultimate expression of civilized societies. They come with great advantages for those that inhabit them like job opportunities, security, and closeness to the kingdom’s governing bodies. But all these amenities come at a steep price. Crime guilds, overcrowded areas, and filth are the worst of them. Managing the pollution caused by thousands of individuals is a logistical problem that all cities suffer from. One of the best ways to deal with it requires well-constructed and tended sewage systems. Alas, even the most advanced cities have marginal results; which in turn propitiates the birth of underground denizens that prowl the city’s underworld.

Vagellan City has a long-standing problem with the denizens of the tunnel systems and sewers. The majority of these individuals participate with the crime guilds or are petty criminals themselves. Some are human, others are goblinoids, and a few of them suffer a form of rodent lycanthropy. These wererats, allured by the dark, damp, reeking sewers, have found a home and a base of operations in the large network of sewage exhausts.

They have grown in numbers and strength in the past few months after a magically-inclined wererat took control of their group. The wererat mage is known as Garko. Garko commands the loyalty of all others with the lycanthropy curse, as well as countless common rodents that recognize him as their pack-leader. Garko runs the makeshift organization from a hidden lair in the sewers.

Garko has an arcane study where he researches new incantations and attempts to teach a trick or two to talented wererats in his close-knit community. So far, he has had little luck teaching his kin to perform magic.

Garko covets arcane knowledge above anything else. His wererat followers cannot fathom Garko’s ambitions but obey his orders to the letter. Garko has commanded his forces to break into libraries and the private collections of wealthy individuals to find spellbooks, magical tomes, scrolls, or other arcane paraphernalia. The wererats have somewhat succeeded to get the items. They trust Garko’s words when he claims that stuff shall secure their power in the city’s battling underworld.

Wererats break into people’s homes, books are stolen, and known spellcasters are assailed on the streets. The populace is nervous by the increased activity of the shape-changers and the common rats that emerge from the sewers to attack those who stand in their way. The city offers a bounty of 1,500 gold pieces for valorous individuals who dare explore the wererat’s realm under the city and put an end to their aggressive attacks.

Features of the Sewers

The following features correspond to the sewer tunnels map near Garko’s lair; areas 1 through 9.

Light. The main tunnels feature sconces with continual flame spells. They fizzle out after 1 minute if removed.

Stench. The nauseating stench of the sewage waters causes weak stomachs to turn (DC 14 Constitution). those affected puke and become poisoned for 1 hour.

The nearest manhole access to the sewers control room leads to a 10-foot-wide tunnel with a canal of rancid, reeking water making its way to the sea.

The wererats are aware of the characters’ intrusion into their territory thanks to the countless rodents that patrol the area. Three wererats, two giant rats, and a swarm of rats attack the characters to dissuade them from reaching the control room and exploring further.

The tunnel carries on into the darkness of the city’s depths before branching out into smaller tunnels.

The tunnel branches south and connects to the control room (area 3). Two wererats and two swarms of rats await near the threshold and ready an ambush.

Clockwork, analog machinery by the walls of two contiguous rooms controls the flow and passage of sewage waters. It is all covered by a layer of rust.

The wererats protect this area because the machinery is capable of flooding some areas of the sewage complex under the city. In addition, Garko has installed additional machinery in this room to operate the secret entrances to the lair. An observant individual notices the newest clockwork valves (DC 14 Perception). Operating these valves causes the secret door in area 6 to open.

The Clockwork Device. Operating the levers, valves, and buttons in these rooms can increase or decrease the flow in the canals. Increasing the flow in the canals too much causes area 7 to flood, killing all the rats there. The characters have no way to know of this until they visit area 7. There is a 2-in-6 chance that operating the machine blindly produces the flooding effect.

The secret room is of recent construction and contains three stone chests with standard copper locks.

Garko used magic to create this secret chamber. A spellcaster notices imperfections in the stone bricks that reveal they were created with magic (DC 18 arcana). The room is used to store stolen goods and arcane paraphernalia that Garko intends to use later on.

The iron grate covers a 2-foot-wide, twisting passage that leads to area 7. The rats use it often though it is meant to be used only in emergencies. The scratch marks were made by giant rats whose paws have difficulty handling the grate door. Characters squeezing through the tunnel to area 7 are attacked by a famished swarm of rats.

The alcove by the sewage line contains a rotating valve that raises a dam-like barrier in the canal but it only raises halfway since it is broken. The secondary valve is part of the mechanism to access the lair entrance. Observant characters notice paw-prints going in and out of the wall (DC 16 Perception). A person can use fine tools to force the device to open (DC 18 Thieves’ Tools). Alternatively, operating the valve in area 3 opens the door too.

The narrow tunnel leads to a large, damp chamber littered with debris, papers, and rat detritus. Scores of rodents cling to the walls and ceiling patiently.

When the characters first arrive at this chamber, the countless rats on the walls look at them questioningly as their eyes turn scarlet. Then, all the rats speak in unison in the Common tongue: “Stand back and return from whence you came, intruders. If you value your lives. We shall have no mercy. Retreat and never come back. These are the rats’ dwellings and we shall not suffer you”.

A glowing, rune-carved, magic circle dominates the room. The rushing sound of putrid water comes from an open sewage pipe by the northeast corner.

Garko (wererat mage) confronts the characters in this chamber with the aid of three wererats and one giant rat. The spellcaster lycanthrope uses area-of-effect spells whenever possible but never willingly targets his kin. If Garko drops to a third of his hit points, he attempts to flee down the open pipe (see below). If Garko is defeated, all other rodents lose their morale and flee in a panic.

The Sewage Pipe. A creature that jumps into the open sewage pipe is dragged by the water into the canal in area 2. Garko uses this as a method of escaping if the encounter with the characters appears to be lost.

Garko’s private chambers contain a straw bed, a night table, a desk, and a bookcase. Unlike his wild brethren, Garko remains more attuned with his human nature and prefers to have a room with some luxuries. The other wererats are content with sleeping on the floor and owning nothing of value, caring only for their natural urges.

The Wererats are Defeated

Garko and Company perish in a bloody battle. The characters return to the surface with proof of their exploits and collect the 1,500 gp reward. Vagellan City returns to normal. The townsfolk are grateful to the brave warriors that risked their lives to help them.

Garko manages to escape with his life and finds a place to lick his wounds. The wererat mage is a resourceful individual capable of holding a grudge for years. He bids his time, spreads his curse, and raises a rodent army capable of confronting the characters. Garko becomes a returning villain for future adventures… 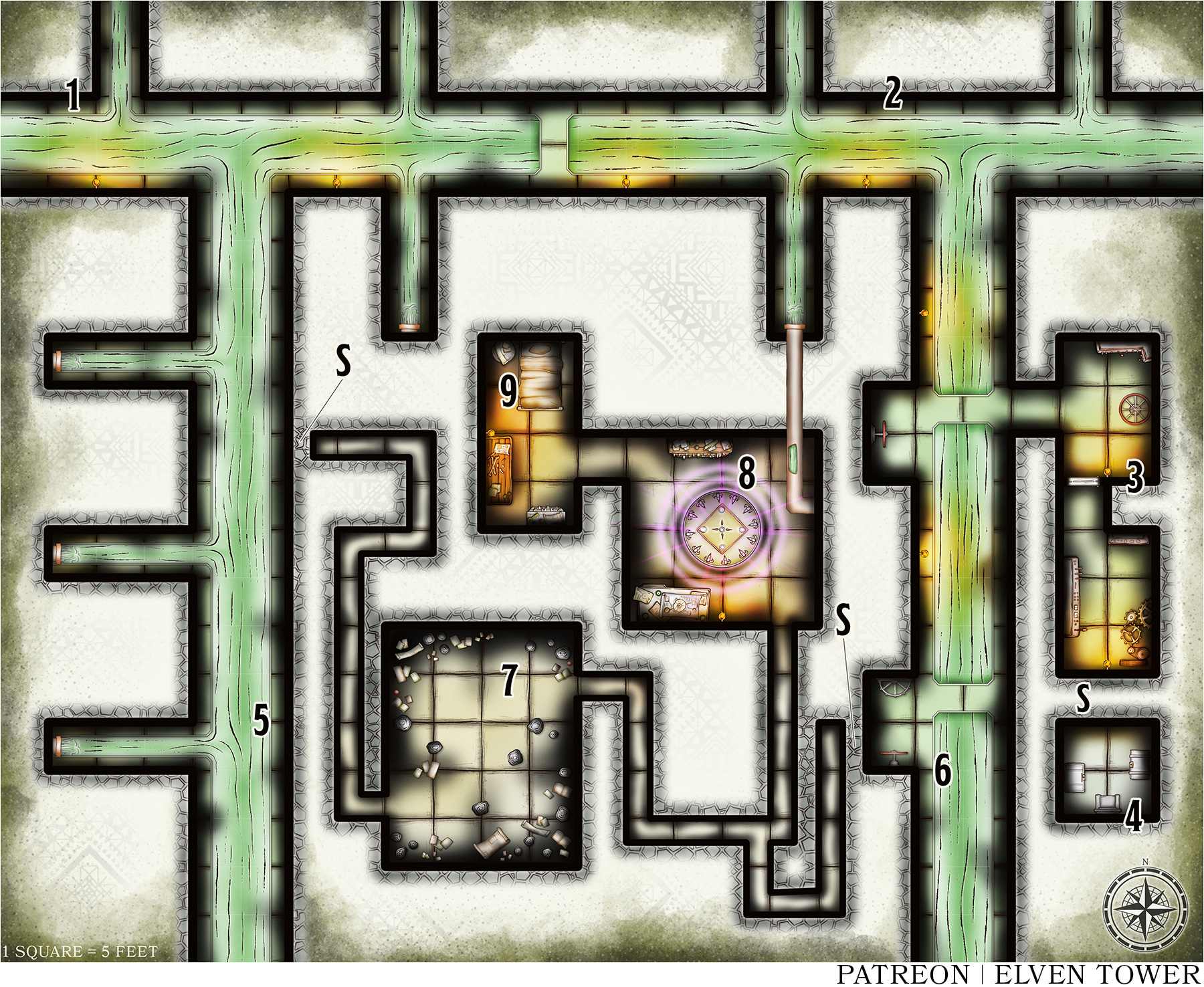