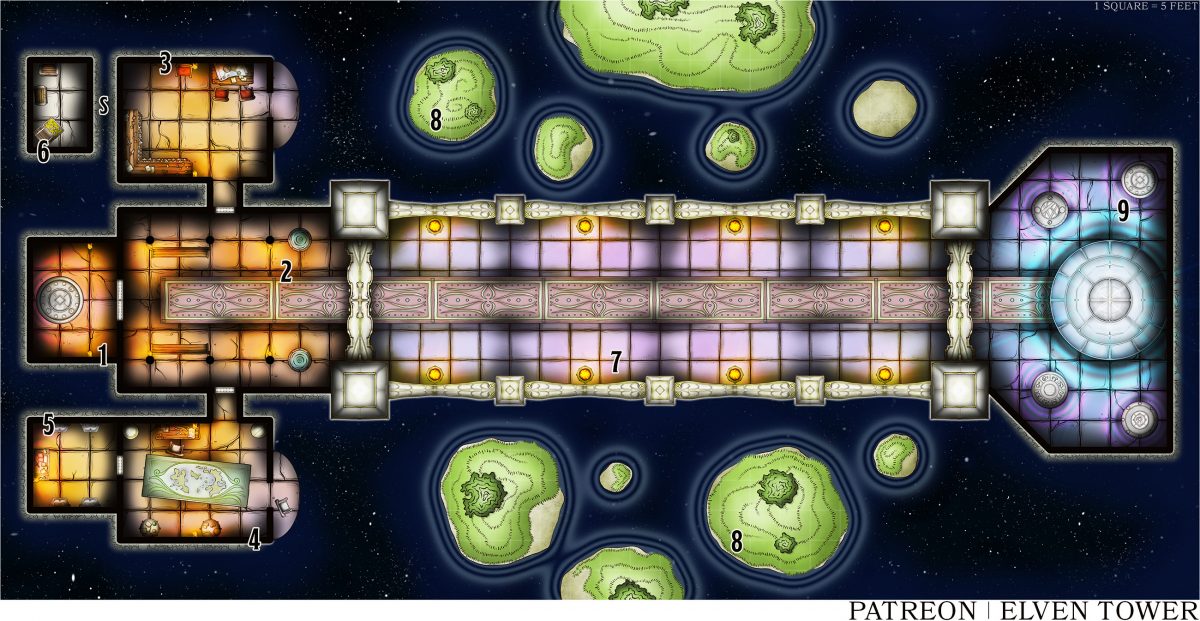 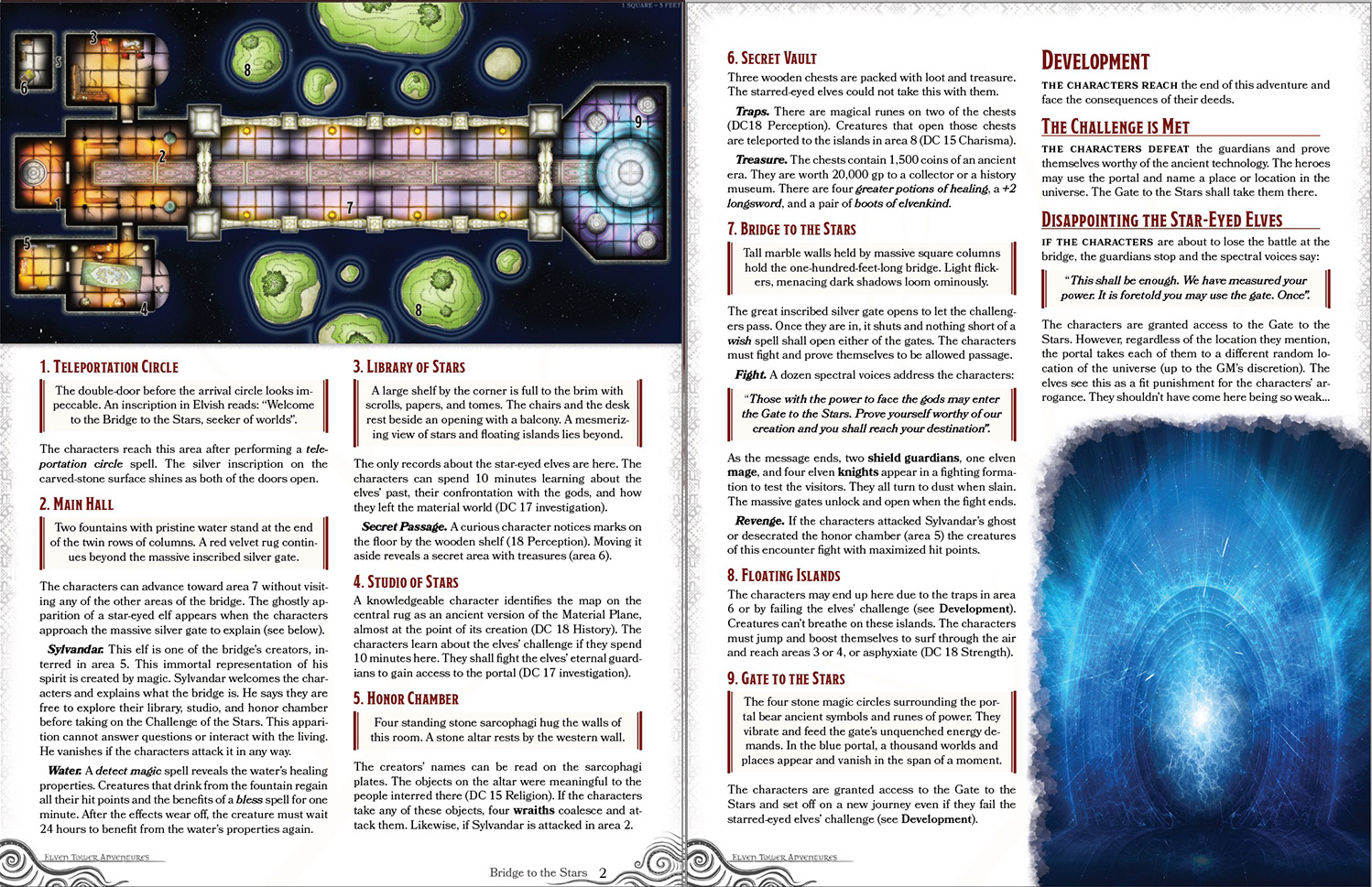 We faced the wrath of the gods for our creation. Prove yourself worthy of it or leave.

At the beginning of time, all the creatures created were an improved, perfect version of what they are today. Ancient texts describe humans’ ancestors with the power of a hundred men, tall as buildings. Dwarves of yore were the size of giants and matched their strength. However, mortal races sinned and challenged the gods, who in turn were filled with disappointment. Eventually, humans, halflings, gnomes, and other races became stunted in punishment: smaller, frailer, and weaker. Little to nothing is known of these long-lost civilizations; the gods made sure to erase all proof of their existence, so their successors would not make the same mistakes. Alas, there is one elite group of elvish ancestors who managed to leave behind not only physical proof of their existence but also a place of knowledge and a planar gate.

Two main features characterize this ancient civilization of astral elves. First, their pointy ears ended in three separate sections, like a chicken foot. Second, their eyes and pupils were pitch-black with several tiny white dots, like the starry sky at night. In addition, they were taller and slender than today’s elves and their hair would often be white or pale blond. These elves had a unique goal. They wished to become one with the stars and the universe to understand everything around them. For centuries, they researched the vast universe for its secrets. The gods, intimidated by the elves’ knowledge and capabilities, decided to confront them. The starred-eyed elves created the Bridge to the Stars to escape their punishment and fulfill their dream. The elves left forever by taking the portal they built. There are no records that point to where they went or what happened to them after that.

The Bridge to the Stars

The starred-eyed elves used this bridge as a means to escape the punishment of the gods. It is a demiplane floating in the middle of space. This marvelous construction also works as proof of their existence. Some areas of the bridge serve that purpose and contain the only written records about the starred-eyed elves. Powerful magic keeps the Bridge to the Stars operational. To protect their invention from the wrong hands, their magic summons guardians and puts to test the abilities of anyone who wishes to traverse their unique dimensional portal.

The characters must travel somewhere in the universe. A different plane of existence, or a secret, hidden place they have never seen before. The Bridge to the Stars is a gate to any location in the multiverse, regardless of the traveler’s origin or past. As long as the location exists, the portal shall conduct there.

Reaching the Portal. The characters must use a teleportation circle spell to reach the bridge (area 1). The magic circle pattern’s origin is not within the scope of this module and is up to the GM’s discretion.

Features of the Demiplane

The following features correspond to all the areas of the Bridge to the Stars; areas 1 through 9.

Light. All torches, lamps, and braziers feature continual flame spells. If removed or dispelled, they reform after one minute. Areas 6 and 8 have no light sources.

Aura. The portal’s magic aura in area 9 is easily detected by magic. It is so strong that it produces a slow hum.

The double-door before the arrival circle looks impeccable. An inscription in Elvish reads: “Welcome to the Bridge to the Stars, seeker of worlds”.

The characters reach this area after performing a teleportation circle spell. The silver inscription on the carved-stone surface shines as both of the doors open.

Two fountains with pristine water stand at the end of the twin rows of columns. A red velvet rug continues beyond the massive inscribed silver gate.

The characters can advance toward area 7 without visiting any of the other areas of the bridge. The ghostly apparition of a starred-eyed elf appears when the characters approach the massive silver gate.

Sylvandar. This elf is one of the bridge’s creators, interred in area 5. This immortal representation of his spirit is created by magic. Sylvandar welcomes the characters and explains what the bridge is. He says they are free to explore their library, studio, and honor chamber before taking on the Challenge of the Stars. This apparition cannot answer questions or interact with the living. He vanishes if the characters attack it in any way.

Water. A detect magic spell reveals the water’s healing properties. Creatures that drink from the fountain regain all their hit points and the benefits of a bless spell for one minute. After the effects wear off, the creature must wait 24 hours to benefit from the water’s properties again.

A large shelf by the corner is full to the brim with scrolls, papers, and tomes. The chairs and the desk rest beside an opening with a balcony. A mesmerizing view of stars and floating islands lies beyond.

The only records about the starred-eyed elves are here. The characters can spend 10 minutes learning about the elves’ past, their confrontation with the gods, and how they left the material world (DC 17 investigation).

Secret Passage. A curious character notices marks on the floor by the wooden shelf (18 Perception). Moving it aside reveals a secret area with treasures (area 6).

A knowledgeable character identifies the map on the central rug as an ancient version of the Material Plane, almost at the point of its creation (DC 18 History). The characters learn about the elves’ challenge if they spend 10 minutes here. They shall fight the elves’ eternal guardians to gain access to the portal (DC 17 investigation).

Four standing stone sarcophagi hug the walls of this room. A stone altar rests by the western wall.

The creators’ names can be read on the sarcophagi plates. The objects on the altar were meaningful to the people interred there (DC 15 Religion). If the characters take any of these objects, four wraiths coalesce and attack them. Likewise, if Sylvandar is attacked in area 2.

Three wooden chests are packed with loot and treasure. The starred-eyed elves could not take this with them.

Traps. There are magical runes on two of the chests (DC18 Perception). Creatures that open those chests are teleported to the islands in area 8 (DC 15 Charisma).

Treasure. The chests contain 1,500 coins of an ancient era. They are worth 20,000 gp to a collector or a history museum. There are four greater potions of healing, a +2 longsword, and a pair of boots of elvenkind.

7. Bridge to the Stars

The great inscribed silver gate opens to let the challengers pass. Once they are in, it shuts and nothing short of a wish spell shall open either of the gates. The characters must fight and prove themselves to be allowed passage.

“Those with the power to face the gods may enter the Gate to the Stars. Prove yourself worthy of our creation and you shall reach your destination”.

As the message ends, two shield guardians, one elven mage, and four elven knights appear in a fighting formation to test the visitors. They all turn to dust when slain. The massive gates unlock and open when the fight ends.

Revenge. If the characters attacked Sylvandar’s ghost or desecrated the honor chamber (area 5) the creatures of this encounter fight with maximized hit points.

The characters may end up here due to the traps in area 6 or by failing the elves’ challenge (see Development). Creatures can’t breathe on these islands. The characters must jump and boost themselves to surf through the air and reach areas 3 or 4, or asphyxiate (DC 18 Strength).

9. Gate to the Stars

The four stone magic circles surrounding the portal bear ancient symbols and runes of power. They vibrate and feed the gate’s unquenched energy demands. In the blue portal, a thousand worlds and places appear and vanish in the span of a moment.

The characters are granted access to the Gate to the Stars and set off on a new journey even if they fail the starred-eyed elves’ challenge (see Development).

The Challenge is Met

The characters defeat the guardians and prove themselves worthy of the ancient technology. The heroes may use the portal and name a place or location in the universe. The Gate to the Stars shall take them there.

If the characters are about to lose the battle at the bridge, the guardians stop and the spectral voices say:

“This shall be enough. We have measured your power. It is foretold you may use the gate. Once”.

The characters are granted access to the Gate to the Stars. However, regardless of the location they mention, the portal takes each of them to a different random location of the universe (up to the GM’s discretion). The elves see this as a fit punishment for the characters’ arrogance. They shouldn’t have come here being so weak… 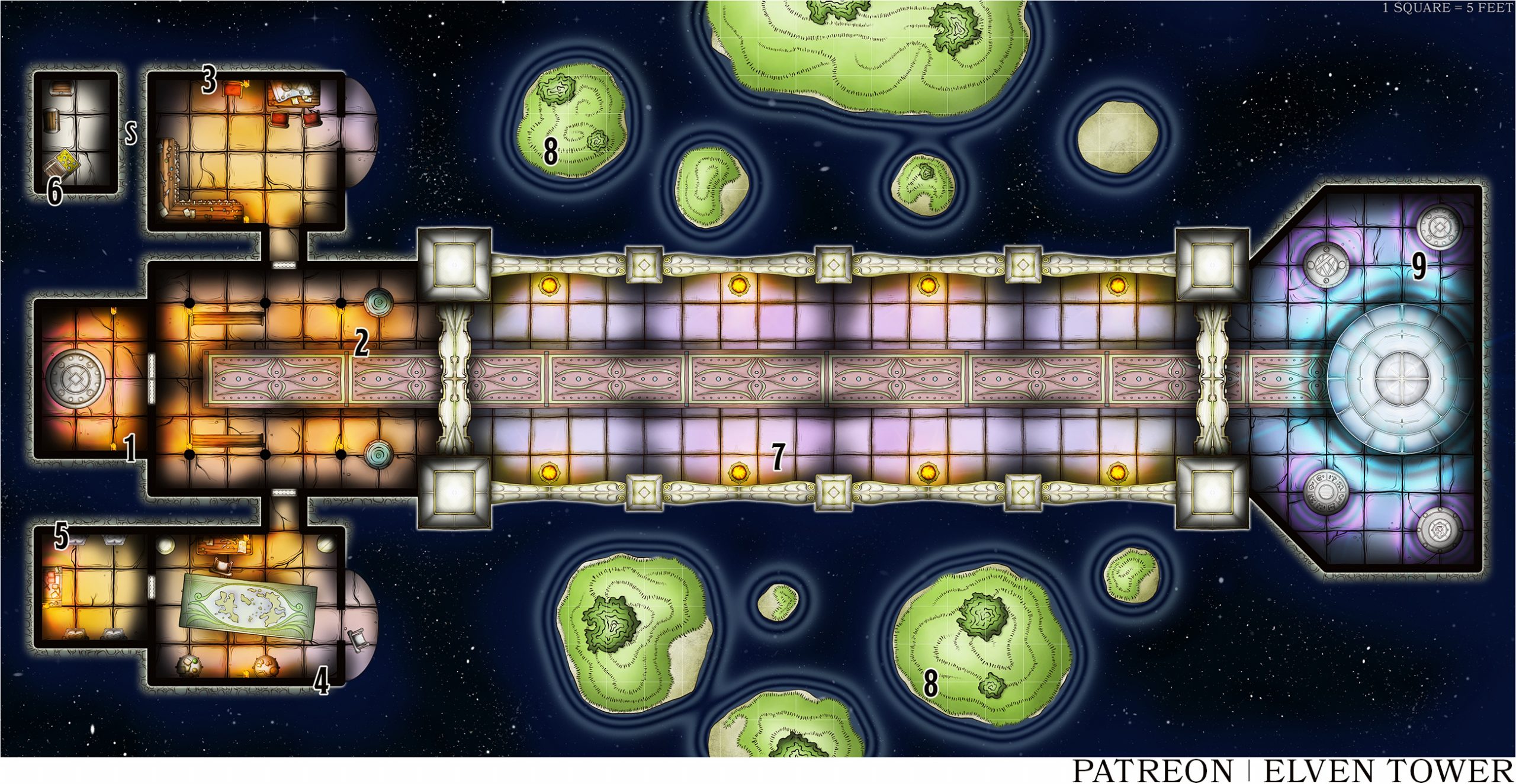