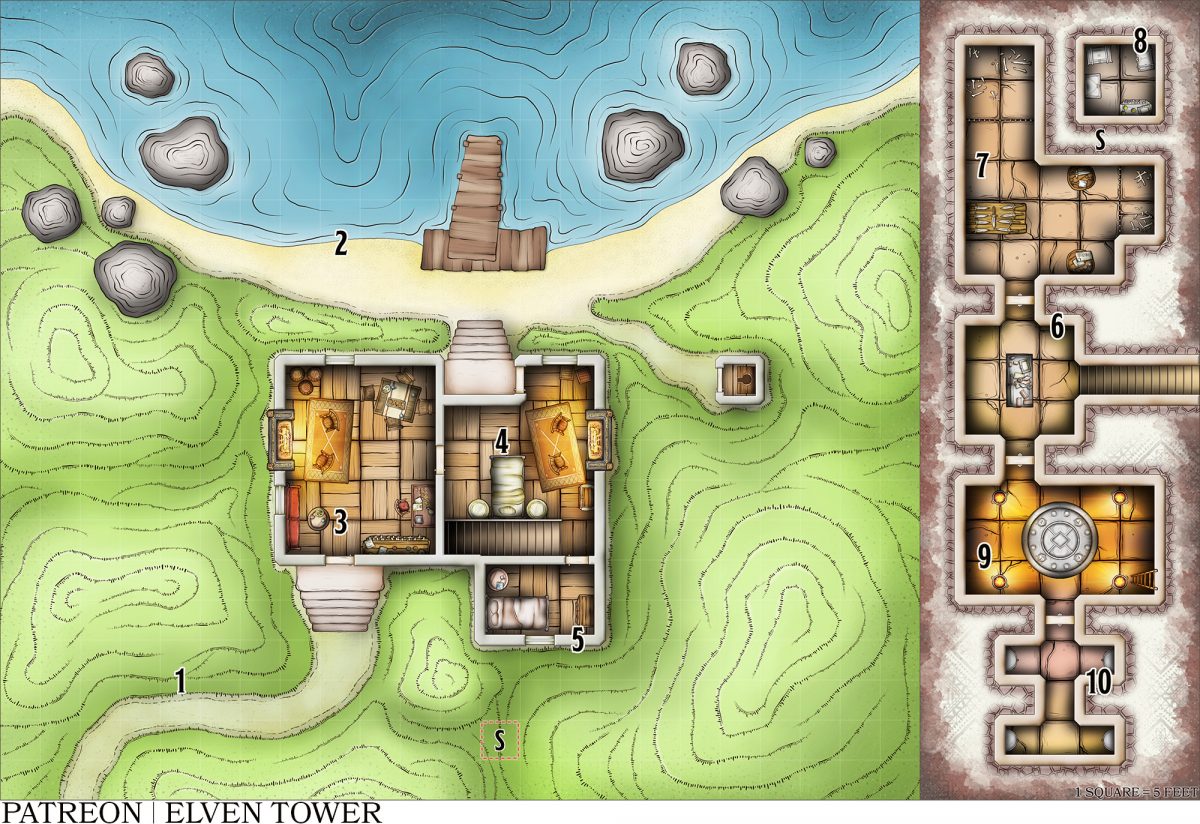 My cousin is missing! If you ask me, that fisherman by the lake is most suspicious.

The spark of evil lives anywhere, even in the least likely of places. Appalling events can trigger an individual’s darkest instincts or break a goodhearted soul. Life is cruel and hard; the purest warriors of light admit that evildoers and criminals have it easy. It is always harder to protect the weak and fight for what is right.

The house beside Silvermoon Lake belongs to a solitary individual. People call him many names: “the fisherman”, “the fish” for he never speaks, or simply “the old man”. His real name is Phaendar Naeven. He is, in fact, a 25-year-old elf. However, his hair and beard are so long and entangled they cover his pointy ears completely. He smells of fish and filth which drives people away.

Nobody knows what happened to “the fisherman” to become what he is. 17 years ago, Phaendar’s tribe was attacked by rabid orcs and goblins. He lost his parents that day and for years the poor orphan elf roamed towns, dangerous roads, and farms to survive. When he turned 12, an old fisherman named Barry took care of him for longer than any other who ever helped. Phaendar learned to fish and hunt. He wouldn’t have to fight for food or suffer cold nights anymore. He felt safe for once.

However, not everything was perfect between Barry and his adoptive son. Phaendar felt pleasure at killing fish and other animals, up to the point of torturing the poor beasts. Barry made efforts to correct this behavior through the years but it only got worse as Phaendar grew older. When he turned 22, Barry tried to stop him from beheading a fox pup with an axe. Barry died that day.

Killing the man who took care of him after he suffered so much was the point of no return. Phaendar’s soul and heart became dark and rotten. Phaendar roamed the land for a couple of years. He hunted, he pick-pocketed, then he robbed others and amassed wealth. With enough gold, he procured a house by Silvermoon Lake that once was a small military outpost with an underground level.

He settled there after two years in the wild. Phaendar didn’t care, though. He kept his tangled hair and unwashed looks even after six months of living in a house. He even delved into the dark arts of necromancy and warlock sorcery. Phaendar fishes, he comes and goes, but he speaks with no one. People call him many unsavory names. Alas, they all ignore the old fisherman is the one responsible for the recent wave of disappearances.

Many people have gone lost near Silvermoon Lake for the past few months. No one has proof of anything but all fingers point to the suspicious old man who moved to the former military outpost half a year ago. The characters are hired to investigate and find clues.

Features of the House by the Lake

The following features correspond to the house by the lake and the dungeon below; areas 1 through 10.

Dark Powers. A detect magic spell perceives the strong necromantic energy from the magic circle in area 9 from a distance of 300 feet and across obstacles.

Screams for Help. The characters hear the calls for help from the prisoners in area 7 if they approach the grass-covered trapdoor above (DC 15 Perception).

The grassy hills make way for the deviation in the main road which eventually ends at the porch of a small house by the shore of Silvermoon Lake.

No sound comes from the house. No lights are on. If the characters walk around the area, they find the grass-covered trapdoor that leads to area 9 (DC 12 Perception).

A moth-eaten, pathetic pier barely remains afloat by the shore. There are no ropes or boat moorings.

The dining room has a hearth, several chairs, a desk, and a bookshelf. The food on the table looks fresh and the burnt wood is recent. Everything looks worn and uncared for. A thick layer of dust covers every surface of the house. If the characters search the place, they find a blood-stained booklet with names of people and specific dates written beside them (DC 12 Investigation).

Treasure. A knowledgeable character recognizes titles in the book collection that are valuable to the right collector (DC 14 History). The book lot is worth 1,000 gp.

The single bed and its linens reek. Hair tufts, nails clippings, and human filth stain the floor. Burned morsels of spoiled meat decompose in the hearth.

Phaendar never cleans. Everything in the room is filthy and covered in spider webs. A perceptive character notices marks on the stairs that descend to area 6. People were dragged against their will (DC 13 Investigation).

Treasure. If the characters search the room, they notice that the wooden chest has a secret compartment (DC 14 Investigation); there are 350 gp stored inside.

The house has a secondary bedroom that Phaendar has never used. The furniture here is in better condition. The bed and wooden shelf are moth-eaten but still usable.

Treasure. Phaendar barely checked this room when he bought the house. He never found the +1 dagger forgotten by the soldiers in the military outpost years ago.

The set of stairs descend to a dark area. Voices of scared people come from the door to the north.

The iron table in the middle of this room displays iron and stone torture implements along with other bloodstained rusty tools. Phaendar used them all before.

There are six people and two corpses in the cells. They are afraid of Phaendar coming back and torturing another poor person. They weep and cry when they see the characters and beg for their help. This alerts Phaendar, who performs a black magic ritual in area 9.

Secret Passageway. A curious character finds a small lever by one of the cells which slides a section of the wall inward to reveal a path to area 8 (DC 16 Perception).

Cells. Both barred doors can be opened by a skillful locksmith (DC 13 Thieves’ Tools). The people are scared and famished. Two of them need help to walk.

This secret chamber was of great use to the military outpost years ago. There are three stone chests and a shelf.

Treasure. The chests contain 1,000 gp, 450 gp worth of fancy silverware, and three potions of healing.

During his years in the wild and the months alone in this house, Phaendar learned simple spells fast and noticed he had a knack for magic. He then delved into black magic and necromancy. Making use of everything he learned, Phaendar (cult fanatic) summons one shadow and one specter to fight alongside him. They confront the characters before the prisoners are freed. If things go south, Phaendar attempts to flee through the hand ladder.

When the building was a military outpost, the commander designated this room as a small mausoleum, to respect the souls of those who died for the cause. Four squad leaders were buried here almost 50 years ago.

Undead Energy. Phaendar’s summoned undead allies are the souls of these poor men. A protection from evil spell helps these souls rest in peace once more.

The characters deal with Phaendar Naeven. They kill him, deliver him to the authorities, or force him to flee. Either way, the mysterious old man near Silvermoon Lake is gone. He is responsible for the deaths of 12 people but at least the six prisoners he kept are saved.

The authorities pay the characters a 1,000 gp reward for their services and grant the heroes the possibility of having a new base of operations: the house by the lake. The characters may buy it for half its base price. Or, a high-ranked individual offers them a deal. He promises the house as a reward, but the characters must do him a favor. That shall be an adventure for another day… 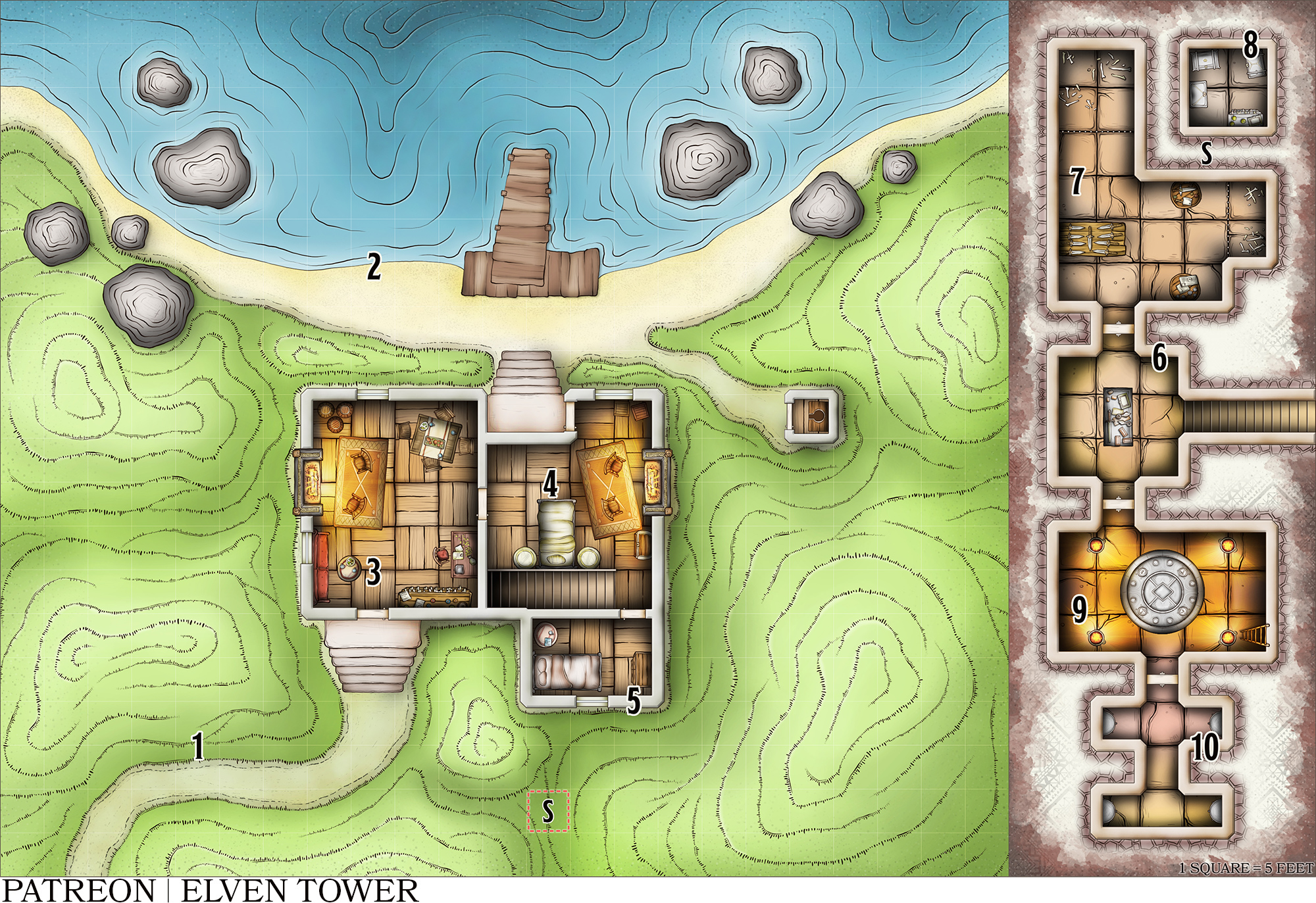