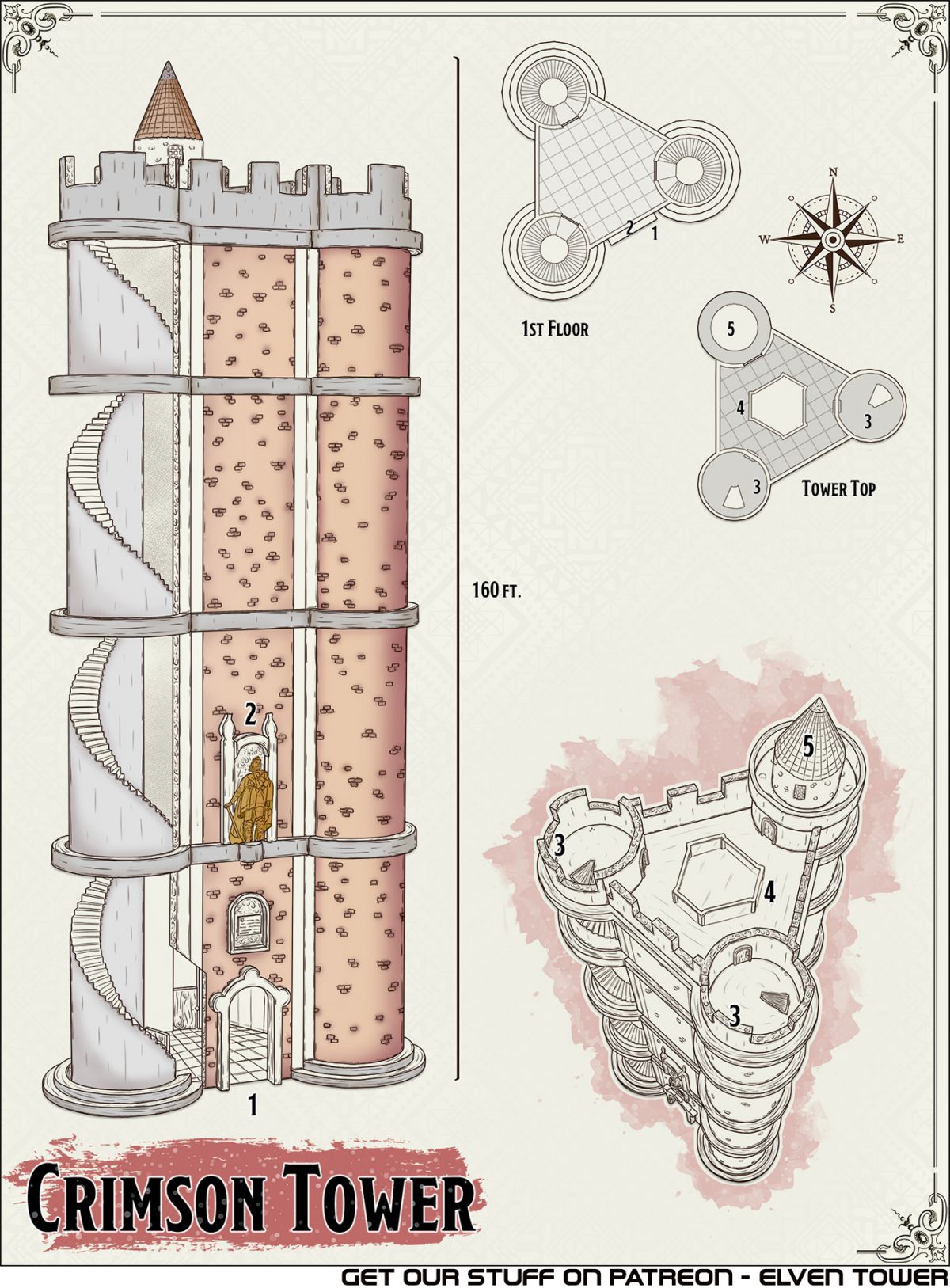 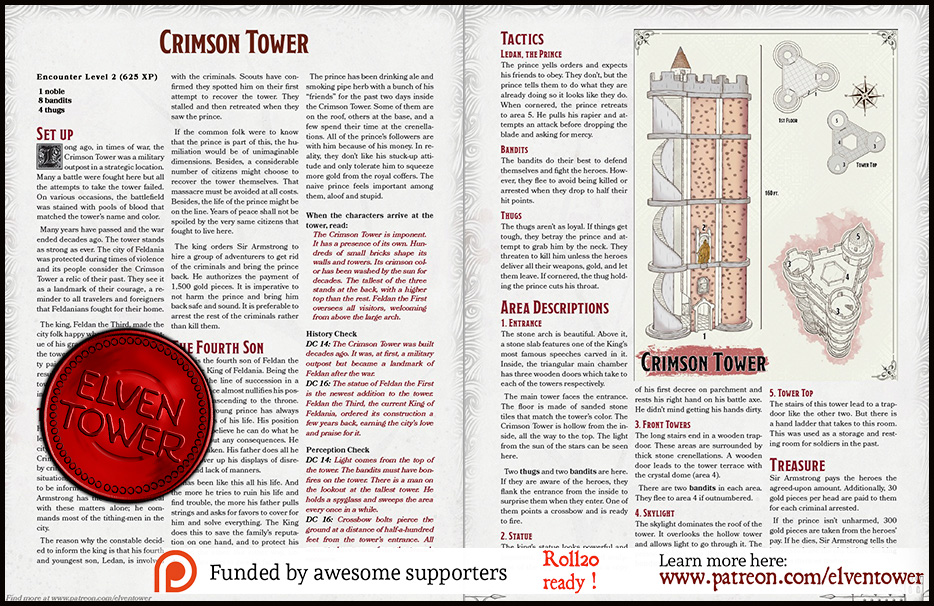 Long ago, in times of war, the Crimson Tower was a military outpost in a strategic location. Many a battle were fought here but all the attempts to take the tower failed. On various occasions, the battlefield was stained with pools of blood that matched the tower’s name and color.

Many years have passed and the war ended decades ago. The tower stands as strong as ever. The city of Feldania was protected during times of violence and its people consider the Crimson Tower a relic of their past. They see it as a landmark of their courage, a reminder to all travelers and foreigners that Feldanians fought for their home.

The king, Feldan the Third, made the city folk happy when he ordered a statue of his grandfather to be built above the tower’s main entrance. His Majesty paid for the best sculptor and the result was marvelous. Since then, the tower is a symbol of pride, and honor in Feldania.

His Majesty finds himself in a problematic situation. Sir Armstrong, the city’s constable, has informed him that Crimson Tower is, as of now, occupied by criminals and burglars. In a normal situation, the King shouldn’t even have to be informed of such banalities. Sir Armstrong has the authority to deal with these matters alone; he commands most of the tithing-men in the city.

The reason why the constable decided to inform the king is that his fourth and youngest son, Ledan, is involved with the criminals. Scouts have confirmed they spotted him on their first attempt to recover the tower. They stalled and then retreated when they saw the prince.

If the common folk were to know that the prince is part of this, the humiliation would be of unimaginable dimensions. Besides, a considerable number of citizens might choose to recover the tower themselves. That massacre must be avoided at all costs. Besides, the life of the prince might be on the line. Years of peace shall not be spoiled by the very same citizens that fought to live here.

The king orders Sir Armstrong to hire a group of adventurers to get rid of the criminals and bring the prince back. He authorizes the payment of 1,500 gold pieces. It is imperative to not harm the prince and bring him back safe and sound. It is preferable to arrest the rest of the criminals rather than kill them.

Ledan is the fourth son of Feldan the Third, the King of Feldania. Being the fourth on the line of succession in a realm of peace almost nullifies his possibilities of ascending to the throne. Because of this, the young prince has always made a mess of his life. His position makes him believe he can do what he wants without any consequences. He is not mistaken. His father does all he can to cover up his displays of disrespect and lack of manners.

It has been like this all his life. And the more he tries to ruin his life and find trouble, the more his father pulls strings and asks for favors to cover for him and solve everything. The King does this to save the family’s reputation on one hand, and to protect his son on the other. But either way, Ledan always tries to go a little bit farther.

The prince has been drinking ale and smoking pipe herb with a bunch of his “friends” for the past two days inside the Crimson Tower. Some of them are on the roof, others at the base, and a few spend their time at the crenellations. All of the prince’s followers are with him because of his money. In reality, they don’t like his stuck-up attitude and only tolerate him to squeeze more gold from the royal coffers.

When the characters arrive at the tower, read:

The Crimson Tower is imponent. It has a presence of its own. Hundreds of small bricks shape its walls and towers. Its crimson color has been washed by the sun for decades. The tallest of the three stands at the back, with a higher top than the rest. Feldan the First oversees all visitors, welcoming from above the large arched entrance.

DC 14: The Crimson Tower was built decades ago. It was, at first, a military outpost but became a landmark of Feldan after the war.

DC 16: The statue of Feldan the First is the newest addition to the tower. Feldan the Third, the current King of Feldania, ordered its construction a few years back, earning the city’s love and praise for it.

DC 14: Light comes from the top of the tower. The bandits must have bonfires on the tower. There is a man on the lookout at the tallest tower. He holds a spyglass and sweeps the area every once in a while.

The prince yells orders and expects his friends to obey. They don’t, but the prince tells them to do what they are already doing so it looks like they do. When cornered, the prince retreats to area 5. He pulls his rapier and attempts an attack before dropping the blade and asking for mercy.

The bandits do their best to defend themselves and fight the heroes. However, they flee to avoid being killed or arrested when they drop to half their hit points.

The thugs do their best to defend themselves and fight the heroes. If things get tough, they betray the prince and attempt to grab him by the neck. They threaten to kill him unless the heroes deliver all their weapons, gold, and let them leave. If cornered, the thug holding the prince cuts his throat.

The entrance of the tower has a beautiful stone arch. Above the hollow arch, a stone slab features one of the King’s most famous speeches carved in it. Inside, the triangular main chamber has three wooden doors which take to each of the towers respectively.

The main tower faces the entrance. The floor is made of sanded stone tiles that match the tower’s color. The Crimson Tower is hollow from the inside, all the way to the top. The light from the sun of the stars can be seen here. The crystal dome (area 4) makes this possible.

Two thugs and two bandits are here. If they are aware of the heroes, they flank the entrance from the inside to surprise them when they enter. One of them points a crossbow and is ready to fire.

The king’s statue looks powerful and imponent. The recently added sculpture of the bygone king holds a copy of his first decree on parchment and rests his right hand on his battle axe. He was the type of king that didn’t mind getting his hands dirty.

The long stairs end in a wooden trapdoor. These areas are surrounded by thick stone crenellations. A wooden door leads to the tower terrace with the crystal dome (area 4).

There are two bandits in each of these areas next to the trapdoors. They join their comrades in area 4 if they are outnumbered.

The skylight dominates the roof of the tower. It overlooks the hollow tower and allows light to go through it. The prince (noble), two thugs, and two bandits are here.

The stairs of this tower lead to a trapdoor like the other two. But there is a hand ladder that takes to this room. This was used as a storage and resting room for soldiers in the past.

Sir Armstrong pays the heroes the agreed-upon amount. Additionally, 30 gold pieces per head are paid to them for each criminal arrested.

If the heroes fail to bring the prince safe and unharmed, 300 gold pieces are taken from their pay. If he dies, Sir Armstrong tells the heroes to leave the city before the king brands them as traitors… 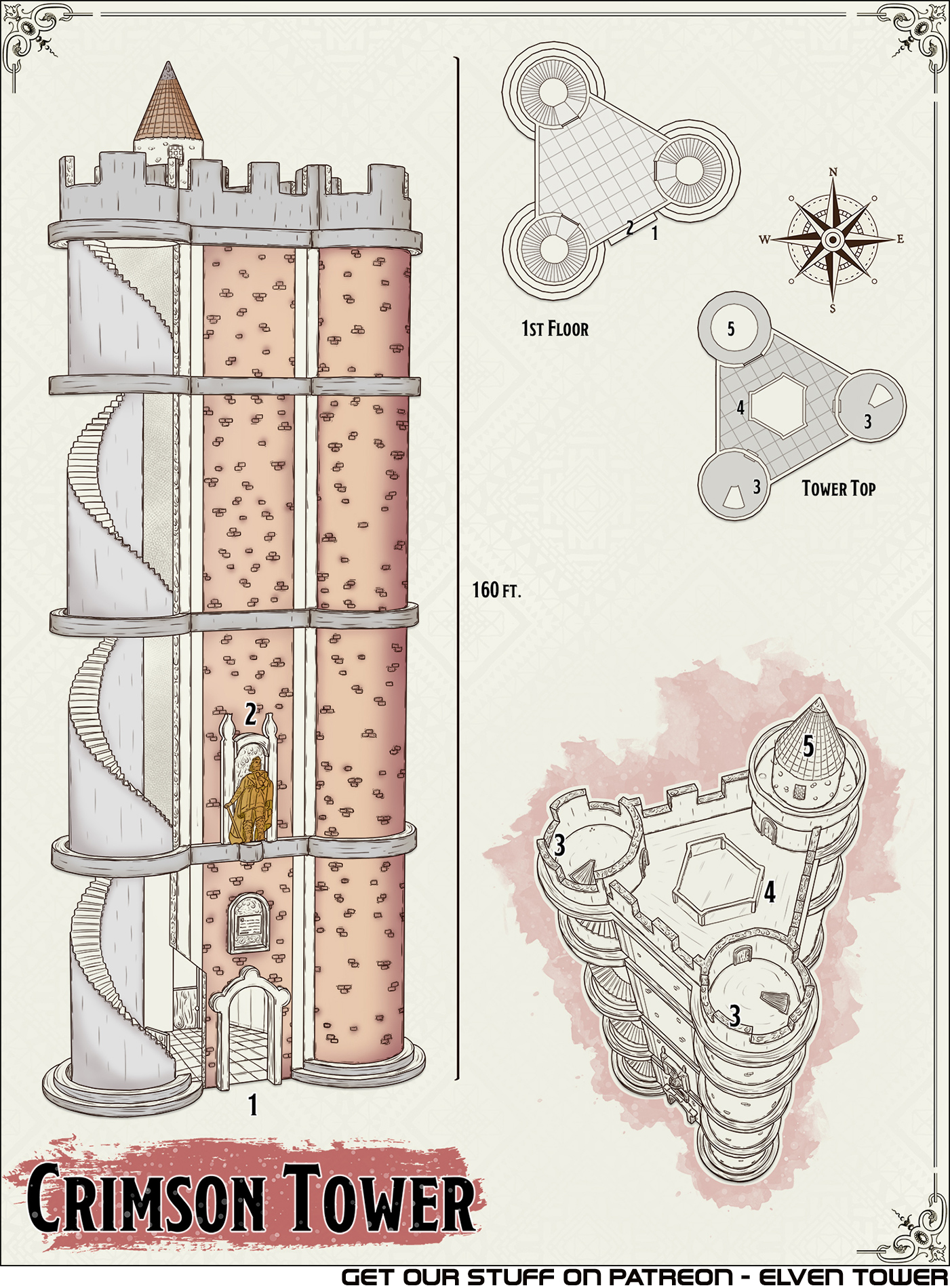