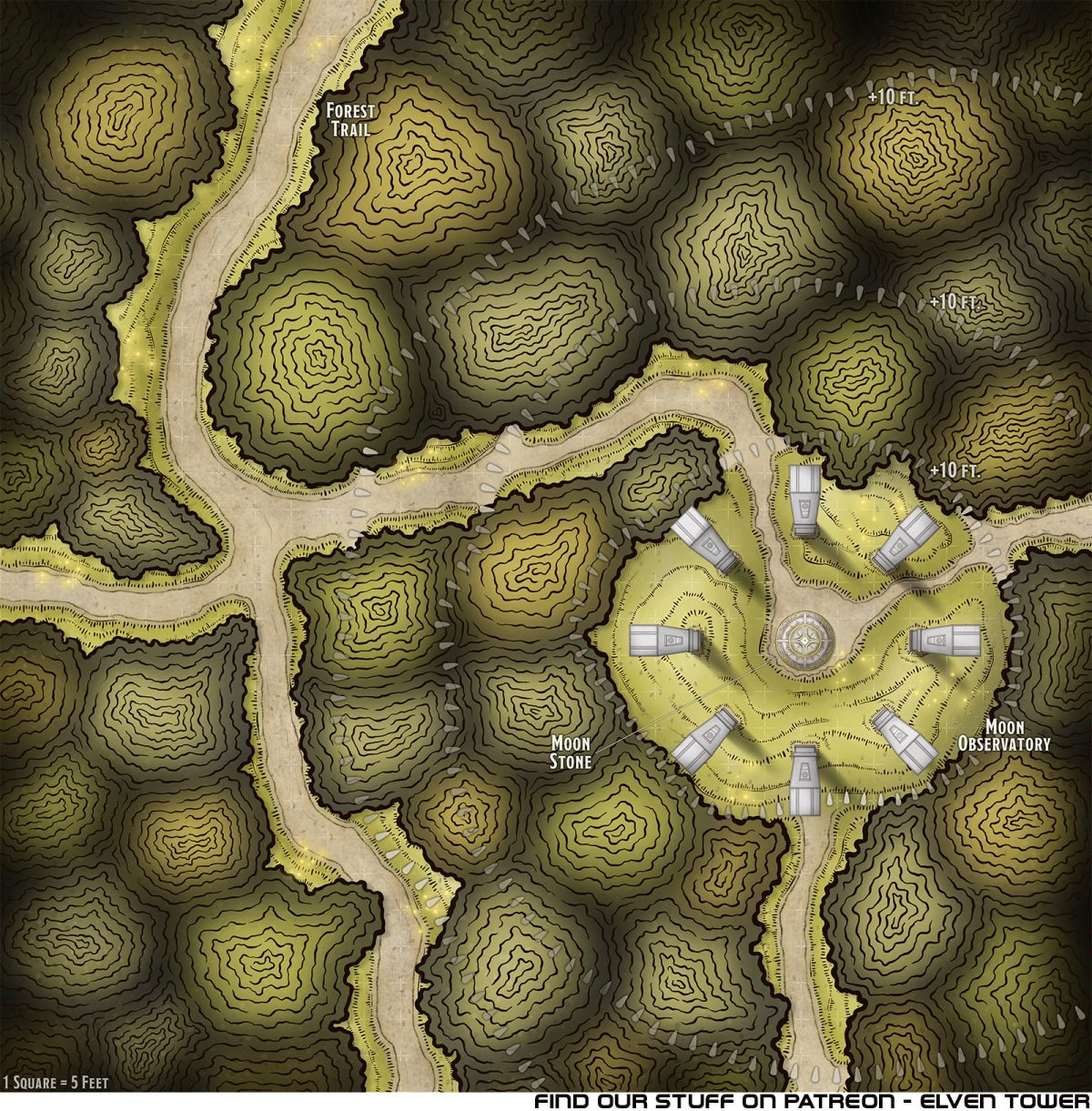 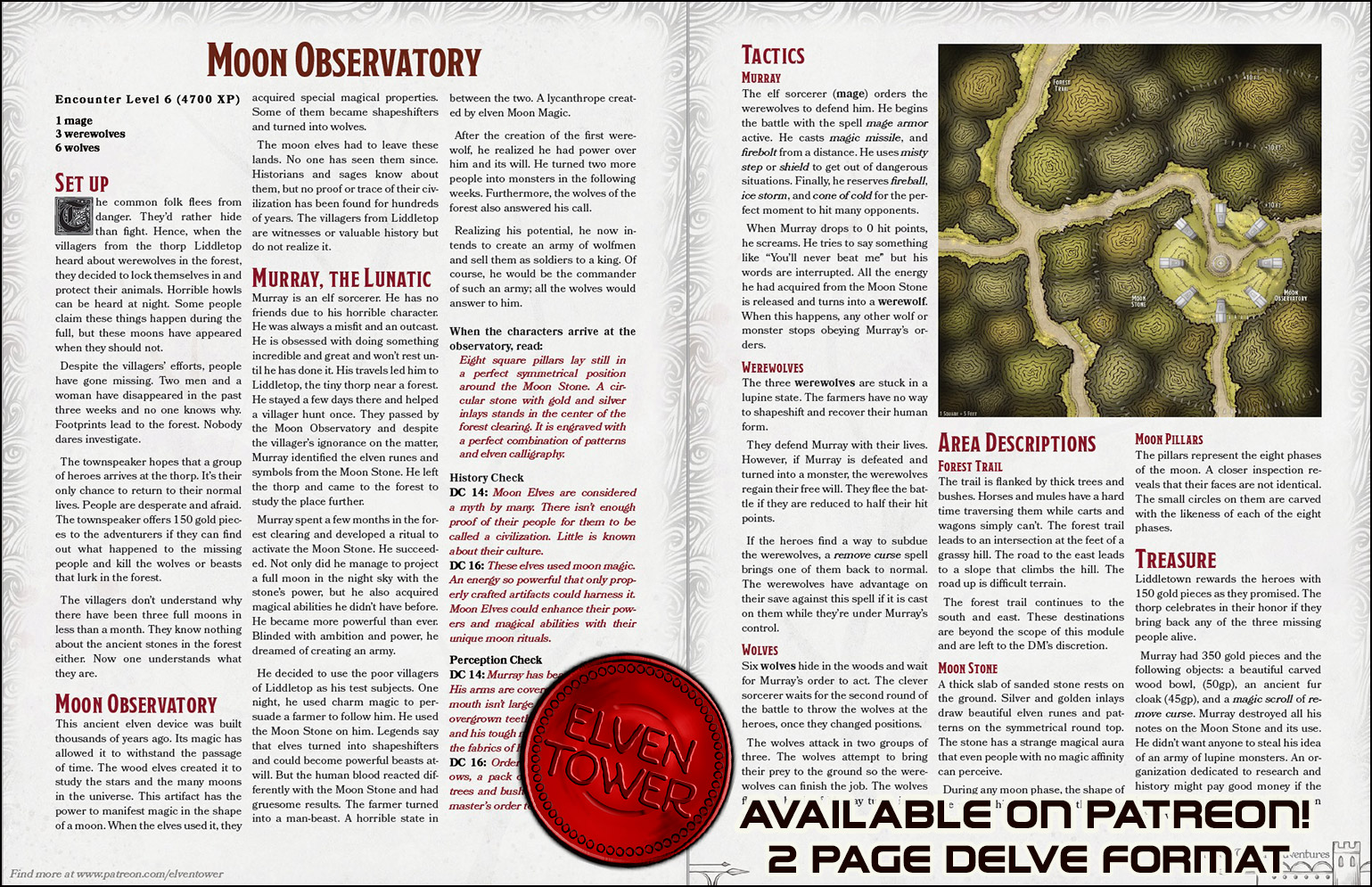 The common folk flees from danger. They’d rather hide than fight. Hence, when the villagers from the thorp Liddletop heard about werewolves in the forest, they decided to lock themselves in and protect their animals. Horrible howls can be heard at night. Some people claim these things happen during the full, but these moons have appeared when they should not.

Despite the villagers’ efforts, people have gone missing. Two men and a woman have disappeared in the past three weeks and no one knows why. Footprints lead to the forest. Nobody dares investigate.

The townspeaker hopes that a group of heroes arrives at the thorp. It’s their only chance to return to their normal lives. People are desperate and afraid. The townspeaker offers 150 gold pieces to the adventurers if they can find out what happened to the missing people and kill the wolves or beasts that lurk in the forest.

The villagers don’t understand why there have been three full moons in less than a month. They know nothing about the ancient stones in the forest either. Now one understands what they are.

This ancient elven device was built thousands of years ago. Its magic has allowed it to withstand the passage of time. The wood elves created it to study the stars and the many moons in the universe. This artifact has the power to manifest magic in the shape of a moon. When the elves used it, they acquired special magical properties. Some of them became shapeshifters and turned into wolves.

The moon elves had to leave these lands. No one has seen them since. Historians and sages know about them, but no proof or trace of their civilization has been found for hundreds of years. The villagers from Liddletop are witnesses or valuable history but do not realize it.

Murray is an elf sorcerer. He has no friends due to his horrible character. He was always a misfit and an outcast. He is obsessed with doing something incredible and great and won’t rest until he has done it. His travels led him to Liddletop, the tiny thorp near a forest. He stayed a few days there and helped a villager hunt once. They passed by the Moon Observatory and despite the villager’s ignorance on the matter, Murray identified the elven runes and symbols from the Moon Stone. He left the thorp and came to the forest to study the place further.

Murray spent a few months in the forest clearing and developed a ritual to activate the Moon Stone. He succeeded. Not only did he manage to project a full moon in the night sky with the stone’s power, but he also acquired magical abilities he didn’t have before. He became more powerful than ever. Blinded with ambition and power, he dreamed of creating an army.

He decided to use the poor villagers of Liddletop as his test subjects. One night, he used charm magic to persuade a farmer to follow him. He used the Moon Stone on him. Legends say that elves turned into shapeshifters and could become powerful beasts at-will. But the human blood reacted differently with the Moon Stone and had gruesome results. The farmer turned into a man-beast. A horrible state in between the two. A lycanthrope created by elven Moon Magic.

After the creation of the first werewolf, he realized he had power over him and its will. He turned two more people into monsters in the following weeks. Furthermore, the wolves of the forest also answered his call.

Realizing his potential, he now intends to create an army of wolfmen and sell them as soldiers to a king. Of course, he would be the commander of such an army; all the wolves would answer to him.

When the characters arrive at the observatory, read:

Eight square pillars lay still in a perfect symmetrical position around the Moon Stone. A circular stone with gold and silver inlays stands in the center of the forest clearing. It is engraved with a perfect combination of patterns and elven calligraphy.

DC 14: Moon Elves are considered a myth by many. There isn’t enough proof of their people for them to be called a civilization. Little is known about their culture.

DC 16: These elves used moon magic. An energy so powerful that only properly crafted artifacts could harness it. Moon Elves could enhance their powers and magical abilities with their unique moon rituals.

DC 14: Murray has beastlike features. His arms are covered in thick fur. His mouth isn’t large enough to cover his overgrown teeth. He has sharp claws and his tough muscles ripped some of the fabrics of his clothes.

DC 16: Ordered to stay in the shadows, a pack of wolves hides behind trees and bushes. They wait for their master’s order to attack.

The elf sorcerer (mage) orders the werewolves to defend him. He casts magic missile, and firebolt from a distance. He uses misty step or shield to get out of dangerous situations. Finally, he reserves fireball, ice storm, and cone of cold for the perfect moment to hit many opponents.

When Murray drops to 0 hit points, he screams. He tries to say something like “You’ll never beat me” but his words are interrupted. All the energy he had acquired from the Moon Stone is released and turns into a werewolf. When this happens, any other wolf or monster stops obeying Murray’s orders.

The three werewolves are stuck in a lupine state. The farmers have no way to shapeshift and recover their human form.

They defend Murray with their lives. However, if Murray is defeated and turned into a monster, the werewolves regain their free will. They flee the battle if they are reduced to half their hit points.

If the heroes find a way to subdue the werewolves, a remove curse spell brings one of them back to normal. The werewolves have advantage on their save against this spell if it is cast on them while they’re under Murray’s control.

Six wolves hide in the woods and wait for Murray’s order to act. The clever sorcerer waits for the second round of the battle to throw the wolves at the heroes, once they changed positions. The wolves attack in two groups of three. The wolves attempt to bring their prey to the ground so the werewolves can finish the job.

The trail is flanked by thick trees and bushes. Horses and mules have a hard time traversing them while carts and wagons simply can’t. The forest trail leads to an intersection at the feet of a grassy hill. The road to the east leads to a slope that climbs the hill. The road up is difficult terrain.

The forest trail continues to the south and east. These destinations are beyond the scope of this module and are left to the DM’s discretion.

A thick slab of sanded stone rests on the ground. Silver and golden inlays draw beautiful elven runes and patterns on the symmetrical round top. The stone has a strange magical aura that even people with no magic affinity can perceive.

During any moon phase, the shape of the moon shines bright on the Moon Stone.

The pillars represent the eight phases of the moon. A closer inspection reveals that their faces are not identical. The small circles on them are carved with the likeness of each of the eight phases.

Liddletown rewards the heroes with 150 gold pieces as they promised. The thorp celebrates in their honor if they bring back any of the three missing people alive.

Murray had 350 gold pieces and the following objects: a beautiful carved wood bowl, (50gp), an ancient fur cloak (45gp), and a magic scroll of remove curse. Murray destroyed all his notes on the Moon Stone and its use. He didn’t want anyone to steal his idea of an army of lupine monsters. 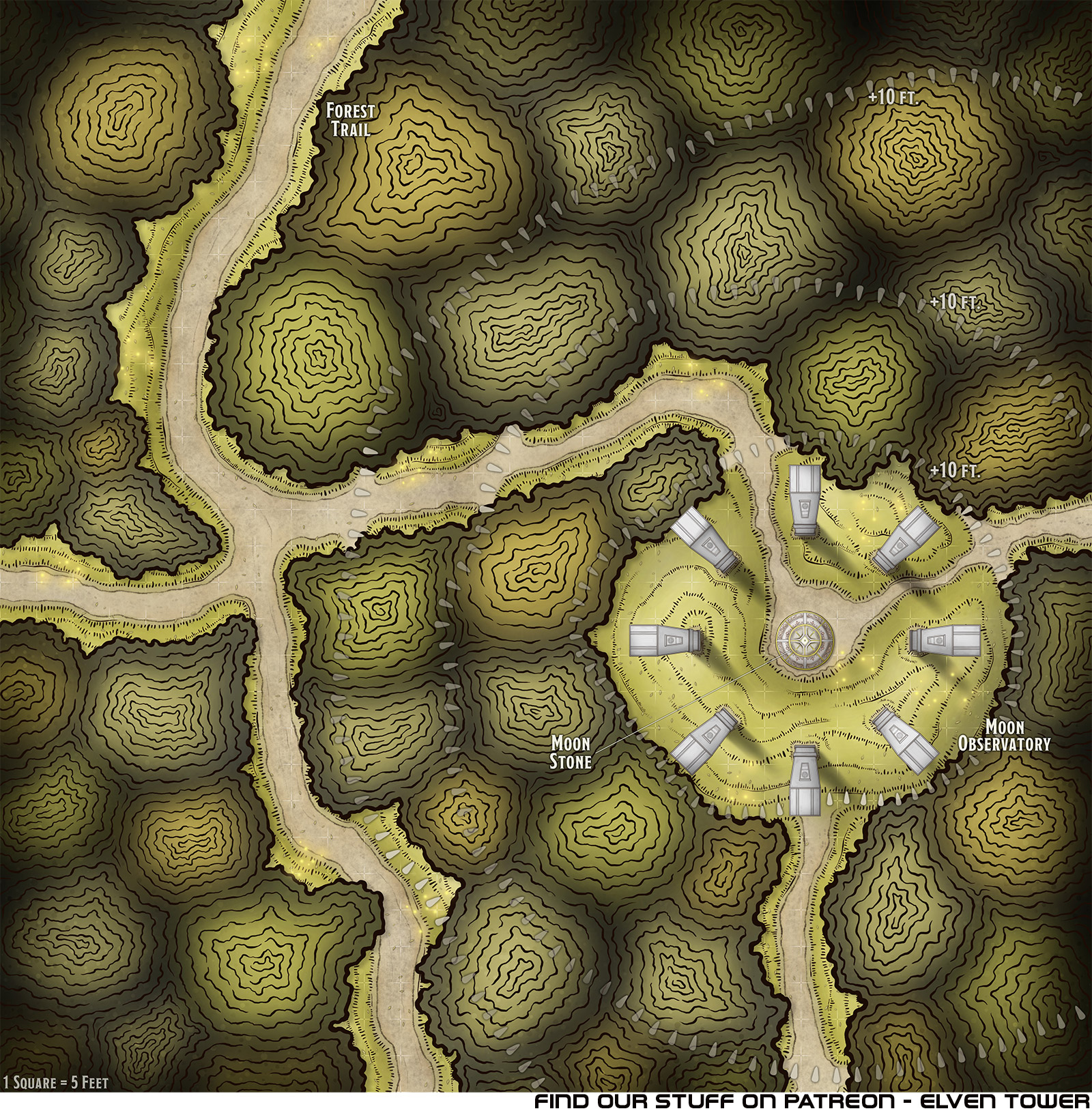