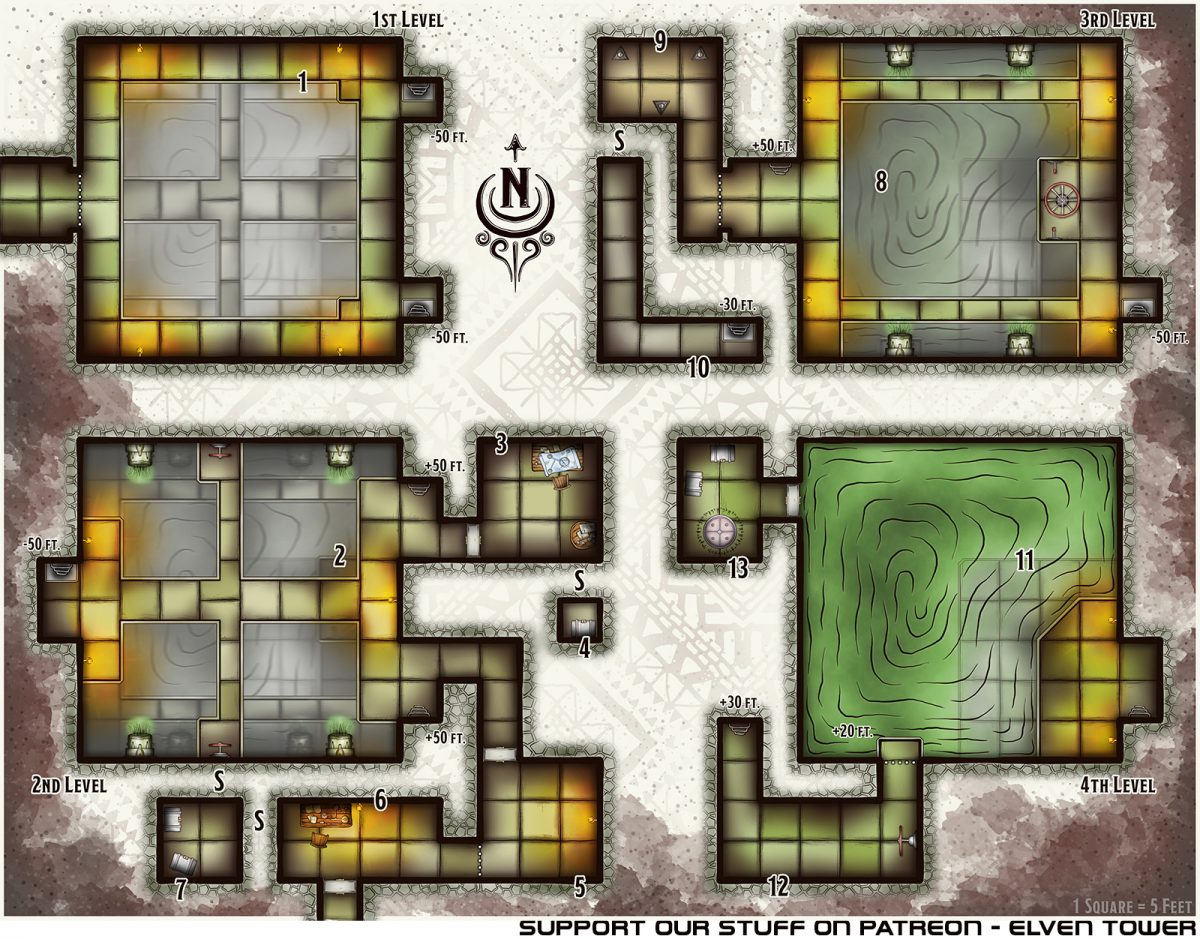 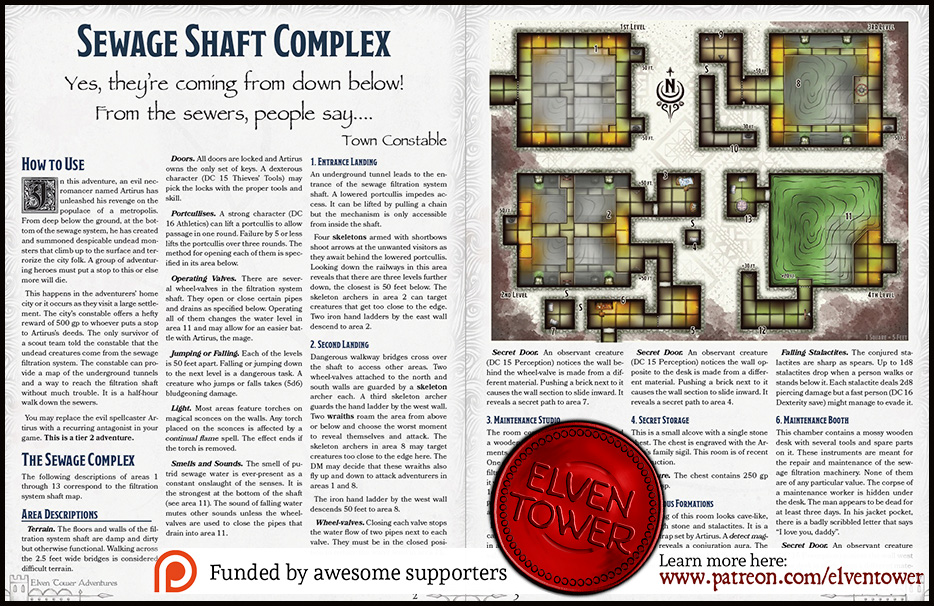 In this adventure, an evil necromancer named Artirus has unleashed his revenge on the populace of a metropolis. From deep below the ground, at the bottom of the sewage system, he has created and summoned despicable undead monsters that climb up to the surface and terrorize the city folk. A group of adventuring heroes must put a stop to this or else more will die.

This happens in the adventurers’ home city or it occurs as they visit a large settlement. The city’s constable offers a hefty reward of 500 gp to whoever puts a stop to Artirus’s deeds. The only survivor of a scout team told the constable that the undead creatures come from the sewage filtration system. The constable can provide a map of the underground tunnels and a way to reach the filtration shaft without much trouble. It is a half-hour walk down the sewers.

You may replace the evil spellcaster Artirus with a recurring antagonist in your game. This is a tier 2 adventure.

The following descriptions of areas 1 through 13 correspond to the filtration system shaft map.

Terrain. The floors and walls of the filtration system shaft are damp and dirty but otherwise functional. Walking across the 2.5 feet wide bridges is considered difficult terrain.

Doors. All doors are locked and Artirus owns the only set of keys. A dexterous character (DC 15 Thieves’ Tools) may pick the locks with the proper tools and skill.

Portcullises. A strong character (DC 16 Athletics) can lift a portcullis to allow passage in one round. Failure by 5 or less lifts the portcullis over three rounds. The method for opening each of them is specified in its area below.

Operating Valves. There are several wheel-valves in the filtration system shaft. They open or close certain pipes and drains as specified below. Operating all of them changes the water level in area 11 and may allow for an easier battle with Artirus, the mage.

Jumping or Falling. Each of the levels is 50 feet apart. Falling or jumping down to the next level is a dangerous task. A creature who jumps or falls takes (5d6) bludgeoning damage.

Light. Most areas feature torches on magical sconces on the walls. Any torch placed on the sconces is affected by a continual flame spell. The effect ends if the torch is removed.

Smells and Sounds. The smell of putrid sewage water is ever-present as a constant onslaught of the senses. It is the strongest at the bottom of the shaft (see area 11). The sound of falling water mutes other sounds unless the wheel-valves are used to close the pipes that drain into area 11.

An underground tunnel leads to the entrance of the sewage filtration system shaft. A lowered portcullis impedes access. It can be lifted by pulling a chain but the mechanism is only accessible from inside the shaft.

Four skeletons armed with shortbows shoot arrows at the unwanted visitors as they await behind the lowered portcullis. Looking down the railways in this area reveals that there are three levels further down, the closest is 50 feet below. The skeleton archers in area 2 can target creatures that get too close to the edge. Two iron hand ladders by the east wall descend to area 2.

Dangerous walkway bridges cross over the shaft to access other areas. Two wheel-valves attached to the north and south walls are guarded by a skeleton archer each. A third skeleton archer guards the hand ladder by the west wall. Two wraiths roam the area from above or below and choose the worst moment to reveal themselves and attack. The skeleton archers in area 8 may target creatures too close to the edge here. The DM may decide that these wraiths also fly up and down to attack adventurers in areas 1 and 8.

The iron hand ladder by the west wall descends 50 feet to area 8.

Wheel-valves. Closing each valve stops the water flow of two pipes next to each valve. They must be in the closed position to reduce the water level in area 11.

Secret Door. An observant creature (DC 15 Perception) notices the wall behind the wheel-valve is made from a different material. Pushing a brick next to it causes the wall section to slide inward. It reveals a secret path to area 7.

The room contains a wooden desk and a wooden side table with several documents, letters, and blueprints on them. One of them is a detailed blueprint of the filtration system shaft that explains how it works provided that a character spends 1d6 x 10 minutes studying it. The blueprint does not include areas 4, 7, or 10 as those are recent additions of Artirus.

By studying the blueprint, a character can learn that closing the wheel-valves in areas 2 and 8 and then operating the valve in area 12 may reduce the water level at the bottom of the shaft.

Secret Door. An observant creature (DC 15 Perception) notices the wall opposite to the desk is made from a different material. Pushing a brick next to it causes the wall section to slide inward. It reveals a secret path to area 4.

This is a small alcove with a single stone chest. The chest is engraved with the Artirus’s family sigil. This room is of recent construction.

The ceiling of this room looks cave-like, with rough stone and stalactites. It is a magical trap set by Artirus. A detect magic spell reveals a conjuration aura. The lowered portcullis can be lifted by pulling a chain next to the torch in area 6.

Falling Stalactites. The conjured stalactites are sharp as spears. Up to 1d8 stalactites drop when a person walks or stands below it. Each stalactite deals 2d8 piercing damage but a fast person (DC 16 Dexterity save) might manage to evade it.

This chamber contains a mossy wooden desk with several tools and spare parts on it. These instruments are meant for the repair and maintenance of the sewage filtration machinery. None of them are of any particular value. The corpse of a maintenance worker is hidden under the desk. The man appears to be dead for at least three days. In his jacket pocket, there is a badly scribbled letter that says “I love you, daddy”.

Secret Door. An observant creature (DC 15 Perception) notices the wall west of the desk is made from a different material. Pushing a brick next to it causes the wall section to slide inward. It reveals a secret path to area 7.

The room contains two stone chests but the one on the southwest corner is a mimic. The mage, Artirus, feeds it once a week to keep it on good terms with the savage creature. This room is of recent construction.

The last landing features two narrow walkways that lead to a wheel-valve by the east side of the shaft. Three skeleton archers and two ghouls guard it. The undead actively prevent people from operating the valve. The portcullis by the west wall can be opened by pulling a chain next to the northwest torch in the filtration shaft. The iron hand ladder by the east wall descends 50 feet to area 11.

Wheel-valve. Closing this valve stops the water flow of the four pipes at this level. It must be in the closed position to reduce the water level in area 11.

There are three iron switches on the floor of this chamber. They are pressure-sensitive plates that drop three inches if at least 80 pounds of weight is applied to either of them. Pushing the three of them at the same time causes the secret door to area 10 to unlock. But the wall section must be pushed outward manually.

Secret Door. An observant creature (DC 15 Perception) notices the south wall opposite to the desk is made from a different material. The only means to open it is by solving the three-buttons puzzle (see above).

A hallway leads to an iron hand ladder that descends 30 feet to area 12. This room is of recent construction.

A large section of this room is flooded. Only the southeast corner of the room and a small balcony to area 12 are over the water. Artirus awaits in this room to those who have dared oppose him. He has summoned a water elemental that he stands on, in the middle of the pond. Artirus throws his spells from a distance while the elemental guards him. Five ghouls emerge from the sewage water and attack the unwanted visitors.

If the adventurers used all the wheel-valves, then the water level has decreased 10 feet. This allows people to stand on the second section of the floor that appears to be submerged (see the map).

Disgusting Stench. The revolting smell of the sewage is strongest here. Only people with strong stomachs (DC 15 Constitution save) can withstand it and avoid becoming poisoned for as long as they remain in the area. Artirus uses magical nose drops that make him immune to this effect.

This room houses the only wheel-valve that partially drains the water in area 11 (see below). The valve is guarded by two ghasts. A chain on the wall next to the valve can be pulled to lift the portcullis that overlooks area 11.

Wheel-valve. Opening this valve causes the water level in area 11 to drop 10 feet. Allowing creatures to stand unimpeded in the section of the floor that is initially flooded. All valves in areas 2 and 8 must be closed for this action to work. If either of those wheel-valves remains open, this one is not operational.

The room contains two stone chests engraved with the evil wizard’s family sigil. Both are locked with a masterwork mechanism but an expert locksmith may be able to bypass them (DC 18 Thieves’ Tools). A permanent teleportation circle is inscribed next to the south wall. It allows the wizard to visit this area and return to their lair. 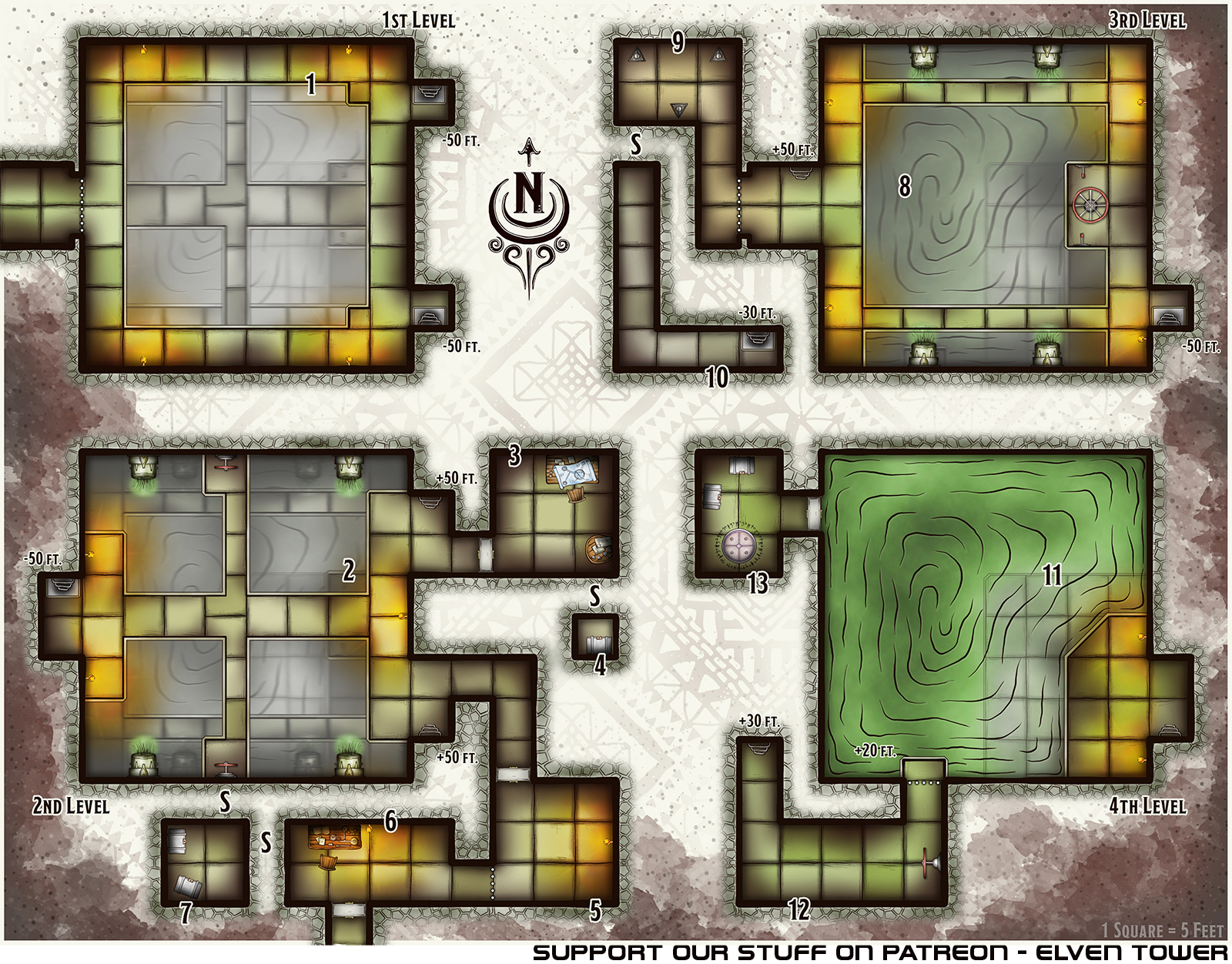