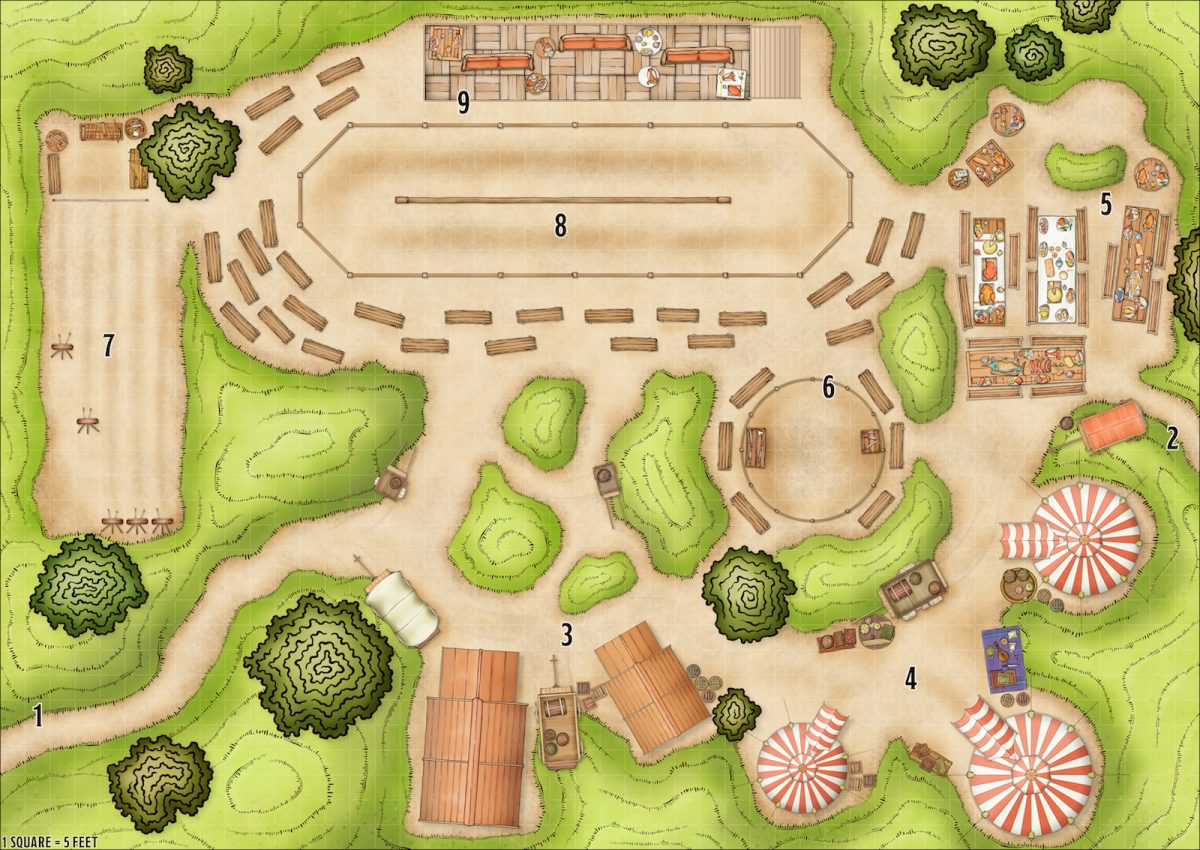 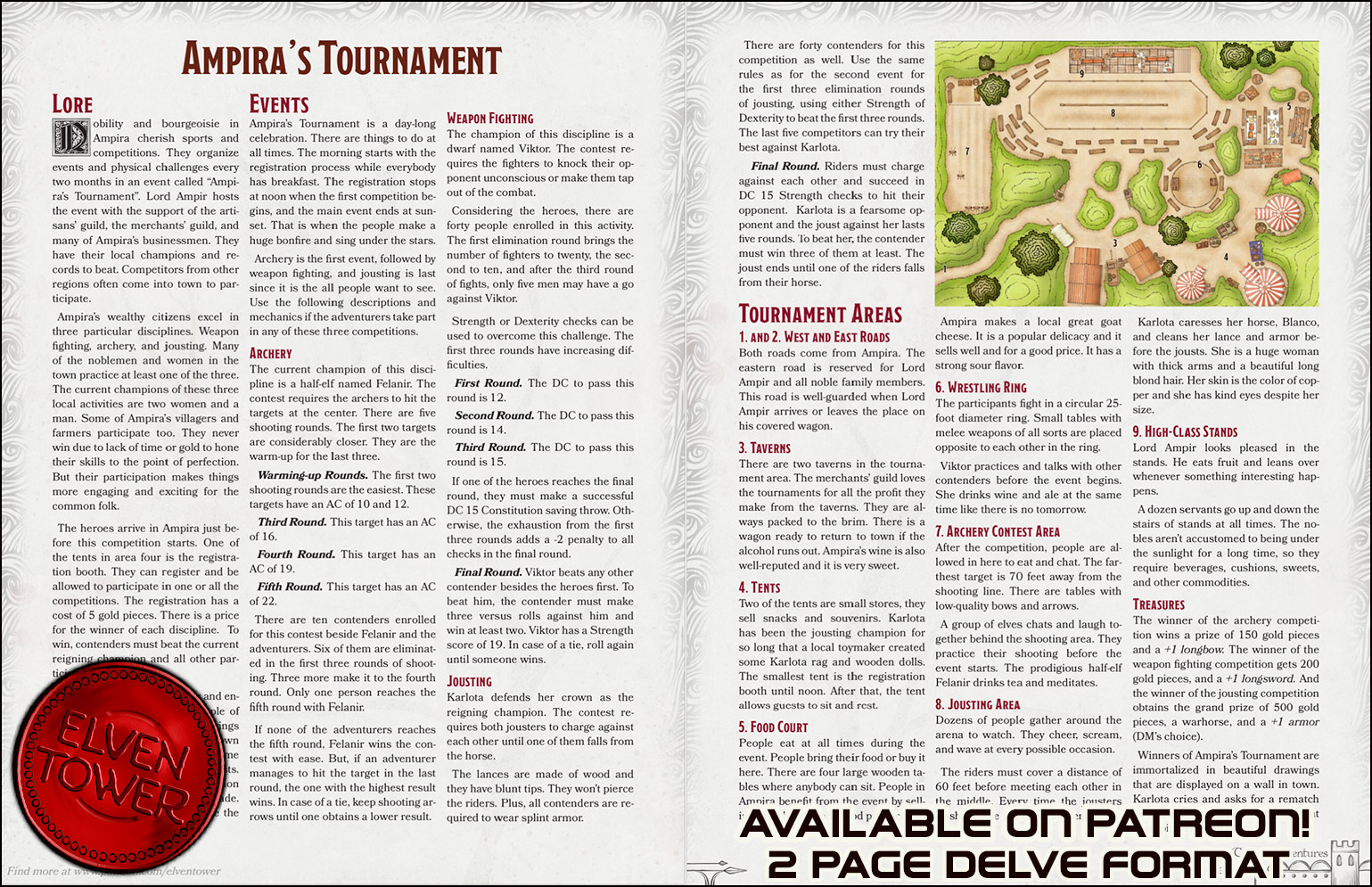 Nobility and bourgeoisie in Ampira cherish sports and competitions. They organize events and physical challenges every two months in an event called “Ampira’s Tournament”. Lord Ampir hosts the event with the support of the artisans’ guild, the merchants’ guild, and many of Ampira’s businessmen. They have their local champions and records to beat. Competitors from other regions often come into town to participate.

Ampira’s wealthy citizens excel in three particular disciplines. Weapon fighting, archery, and jousting. Many of the noblemen and women in the town practice at least one of the three. The current champions of these three local activities are two women and a man. Some of Ampira’s villagers and farmers participate too. They never win from lack of time and gold to hone their skills to the point of perfection. But their participation makes things more engaging and exciting for the common folk.

The heroes arrive in Ampira just before this competition starts. One of the tents in area four is the registration booth. They can register and be allowed to participate in one or all the competitions. The registration has a cost of 5 gold pieces. There is a price for the winner of each discipline.  To win, contenders must beat the current reigning champion and all other participants.

The event not only brings joy and entertainment to the wealthy people of Ampira. It is an event that often brings good income and gold for the town since people from other regions come often to witness the exciting jousts.

Ampira’s Tournament lasts a whole day. The morning starts with the registration process while everybody has breakfast. The registration stops at noon when the first competition begins. The event ends at sunset. When the people make a huge bonfire and sing under the stars.

Archery is the first event, followed by weapon fighting, and jousting is last. Use the following descriptions and mechanics if the adventurers take part in any of these three competitions.

The current champion of this discipline is a half-elf named Felanir. The contest requires the archers to hit the targets at the center. There are five shooting rounds. The first two targets are considerably closer. They are the warm-up for the last three.

Warming-up Rounds. The first two shooting rounds are the easiest. These targets have an AC of 10 and 12.

Third Round. This target has an AC of 16.

Fourth Round. This target has an AC of 19.

Fifth Round. This target has an AC of 22.

There are ten contenders enrolled for this contest beside Felanir and the adventurers. Six of them are eliminated in the first three rounds of shooting. Three more make it to the fourth round. Only one person reaches the fifth round with Felanir.

If none of the adventurers reaches the fifth round, Felanir wins the contest. Otherwise, if an adventurer manages to hit the target in the last round, the one with the highest result wins. In case of a tie, keep shooting arrows until one obtains a lower result.

The champion of this discipline is a dwarf named Viktor. The contest requires the fighters to knock their opponent unconscious or make them tap out of the combat.

Considering the heroes, there are forty people enrolled in this activity. The first elimination round brings the number of fighters to twenty, the second to ten, and after the third round of fights, only five men may have a go against Viktor.

Strength or Dexterity checks can be used to overcome this challenge. The first three rounds have increasing difficulties.

First Round. The DC to pass this round is 12.

Second Round. The DC to pass this round is 14.

Third Round. The DC to pass this round is 15.

If one of the heroes reaches the final round, they must make a successful DC 15 Constitution saving throw. Otherwise, the exhaustion from the first three rounds adds a -2 penalty to all checks in the final round.

Final Round. Viktor beats any other contender besides the heroes first. To beat him, the contender must make three versus rolls against him and win at least two. Viktor has a Strength score of 19. In case of a tie, roll again until someone wins.

Karlota defends her crown as the reigning champion. The contest requires both jousters to charge against each other until one of them falls from the horse.

The lances are made of wood and they have blunt tips. They won’t pierce the riders. Plus, all contenders are required to wear splint armor.

There are forty contenders for this competition as well. Use the same rules as for the second event for the first three elimination rounds of jousting, using either Strength of
Dexterity to beat the first three rounds. The last five competitors can try their best against Karlota.

Final Round. Riders must charge against each other and succeed in DC 15 Strength checks to hit their opponent.  Karlota is a fearsome opponent and the joust against her lasts five rounds. To beat her, the contender must win three of them at least. The joust ends until one of the riders falls from their horse.

Both roads come from Ampira. The eastern road is reserved for Lord Ampir and all noble family members. This road is guarded when Lord Ampir arrives or leaves the place.

There are two taverns in the tournament area. The merchants’ guild loves the tournaments for all the profit they make from the taverns. They are always packed to the brim. There is a wagon ready to return to town if the alcohol runs out. Ampira’s wine is also well-reputed and it is very sweet.

Two of the tents are small stores, they sell snacks and souvenirs. Karlota has been the jousting champion for so long that a local toymaker created some Karlota rag and wooden dolls. The smallest tent is the registration booth until noon. After that, the tent allows guests to sit and rest.

People eat at all times during the event. People bring their food or buy it here. There are four large wooden tables where anybody can sit. People in Ampira benefit from the event by selling their homemade food products.

The participants fight in a circular 25-foot diameter ring. Small tables with melee weapons of all sorts are placed opposite to each other in the ring.

Viktor practices and talks with other contenders before the event begins. She drinks wine and ale at the same time like there is no tomorrow.

After the competition, people are allowed in here to eat and chat. The farthest target is 70 feet away from the shooting line. There are tables with low-quality bows and arrows.

A group of elves chats and laugh together behind the shooting area. They practice their shooting before the event starts. The prodigious half-elf Felanir drinks tea and meditates.

Dozens of people gather around the arena to watch. They cheer, scream, and wave at every possible occasion.

The riders must cover a distance of 60 feet before meeting each other in the middle. Every time the jousters clash, people yell in excitement.

Karlota caresses her horse, Blanco, and cleans her lance and armor before the jousts.

Lord Ampir looks pleased in the stands. He eats fruit and leans over whenever something interesting happens.

A dozen servants go up and down the stairs of stands at all times. The nobles aren’t accustomed to being under the sunlight for a long time, so they require beverages, cushions, sweets, and other commodities.

Winners of Ampira’s Tournament are immortalized in beautiful drawings that are displayed on a wall in town. 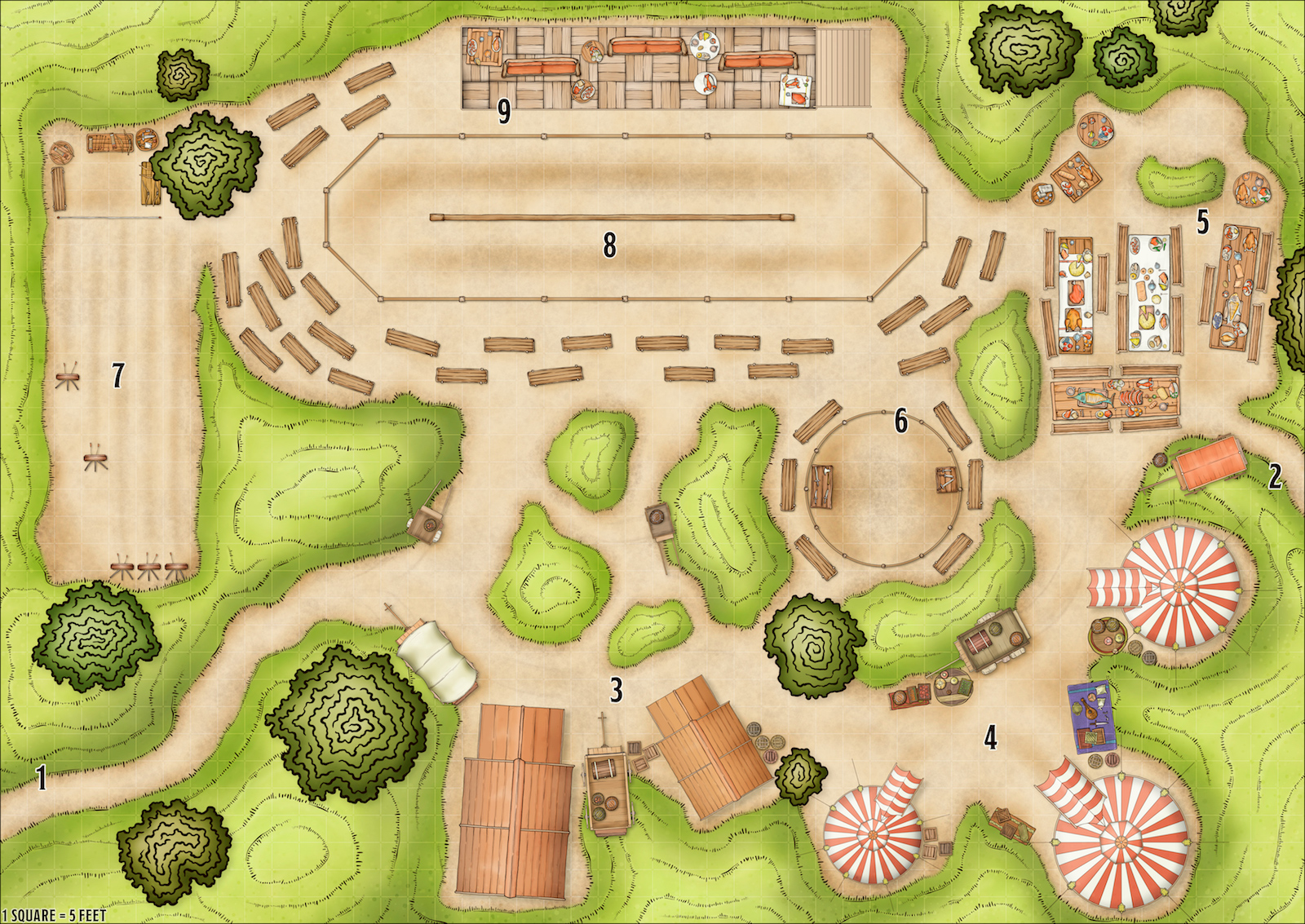