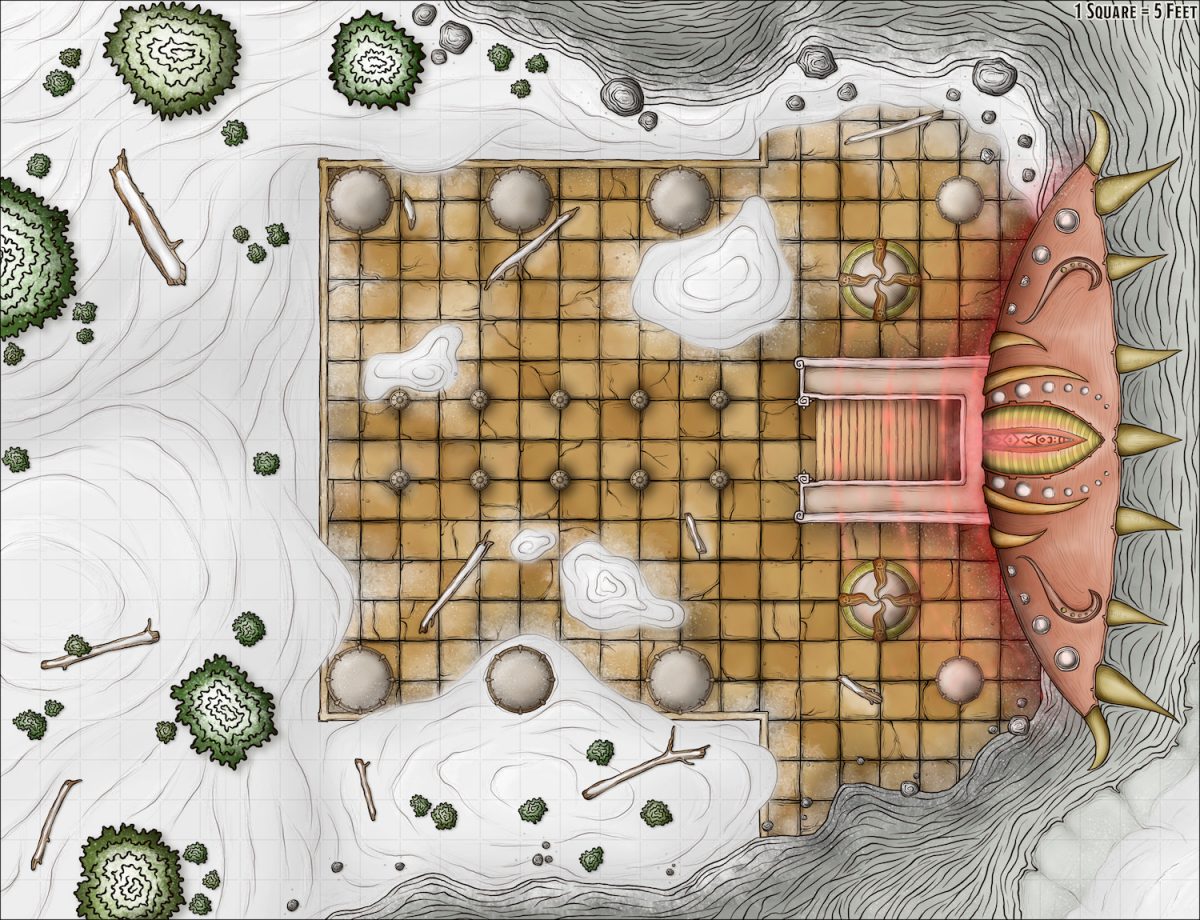 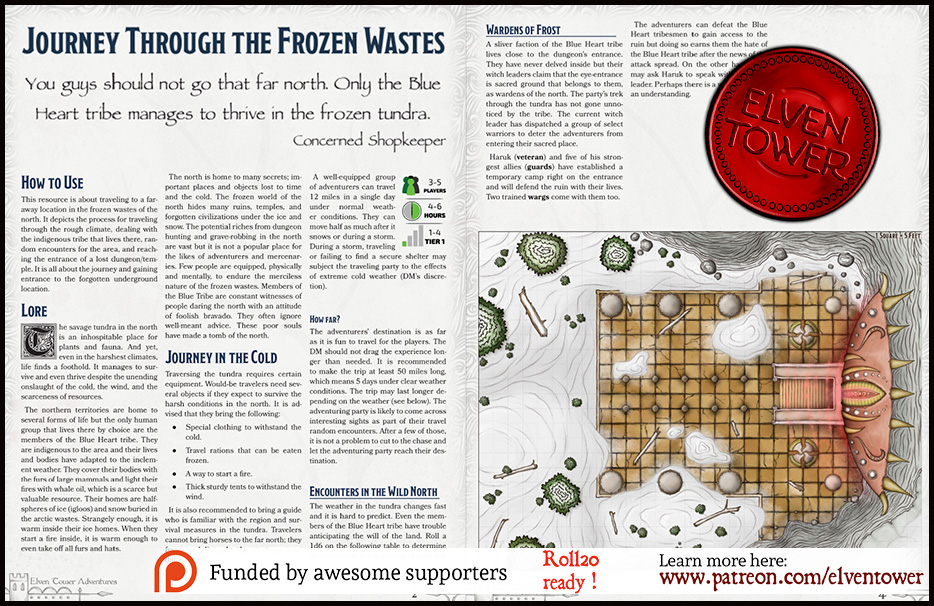 This resource is about traveling to a faraway location in the frozen wastes of the north. It depicts the process for traveling through the rough climate, dealing with the indigenous tribe that lives there, random encounters for the area, and reaching the entrance of a lost dungeon/temple. It is all about the journey and gaining entrance to the forgotten underground location.

The savage tundra in the north is an inhospitable place for plants and fauna. And yet, even in the harshest climates, life finds a foothold. It manages to survive and even thrive despite the unending onslaught of the cold, the wind, and the scarceness of resources.

The northern territories are home to several forms of life but the only human group that lives there by choice are the members of the Blue Heart tribe. They are indigenous to the area and their lives and bodies have adapted to the inclement weather. They cover their bodies with the furs of large mammals and light their fires with whale oil, which is a scarce but valuable resource. Their homes are half-spheres of ice (igloos) and snow buried in the arctic wastes. Strangely enough, it is warm inside their ice homes. When they start a fire inside, it is warm enough to even take off all furs and hats.

The north is home to many secrets; important places and objects lost to time and the cold. The frozen world of the north hides many ruins, temples, and forgotten civilizations under the ice and snow. The potential riches from dungeon hunting and grave-robbing in the north are vast but it is not a popular place for the likes of adventurers and mercenaries. Few people are equipped, physically and mentally, to endure the merciless nature of the frozen wastes. Members of the Blue Tribe are constant witnesses of people daring the north with an attitude of foolish bravado. They often ignore well-meant advice. These poor souls have made a tomb of the north.

Journey in the Cold

Traversing the tundra requires certain equipment. Would-be travelers need several objects if they expect to survive the harsh conditions in the north. It is advised that they bring the following:

It is also recommended to bring a guide who is familiar with the region and survival measures in the tundra. Travelers cannot bring horses to the far north; they freeze and die under these extreme conditions.

A well-equipped group of adventurers can travel 12 miles in a single day under normal weather conditions. They can move half as much after it snows or during a storm. During a storm, traveling or failing to find a secure shelter may subject the traveling party to the effects of extreme cold weather (DM’s discretion).

The adventurers’ destination is as far as it is fun to travel for the players. The DM should not drag the experience longer than needed. It is recommended to make the trip at least 50 miles long, which means 5 days under clear weather conditions. The trip may last longer depending on the weather (see below). The adventuring party is likely to come across interesting sights as part of their travel random encounters. After a few of those, it is not a problem to cut to the chase and let the adventuring party reach their destination.

Encounters in the Wild North

The weather in the tundra changes fast and it is hard to predict. Even the members of the Blue Heart tribe have trouble anticipating the will of the land. Roll a 1d6 on the following table to determine the weather at the beginning of each day.

To find a proper shelter during a storm, a character must make a successful DC 17 Wisdom (Survival) check. On a pass, they find an empty igloo, a cave, a hole on the ground, or another similar location to hide. On a fail, no such secure location is found and the party must brave the storm inside a tent.

Roll a 1d20 on the following table each day of travel, except during storms. Each of the encounters may occur only once. If you reroll an encounter for the second time during the journey, pick the next higher result. Some of these options may be elaborated further by the DM into small quests or even combat encounters if the PCs are interested.

Light. During the day, sunlight is reflected in the snow and may partially blind creatures without eyegear protection.

The Eye Effigy. A gargantuan eye effigy is carved on the cliff wall. It depicts a single eye with a slit pupil and many decorations and runes. The eye’s pupil produces an aura of warmth that keeps the entrance of the dungeon out of the snow’s reach.

A sliver faction of the Blue Heart tribe lives close to the dungeon’s entrance. They have never delved inside but their witch leaders claim that the eye-entrance is sacred ground that belongs to them, as wardens of the north. The party’s trek through the tundra has not gone unnoticed by the tribe. The current witch leader has dispatched a group of select warriors to deter the adventurers from entering their sacred place.

Haruk (veteran) and five of his strongest allies (guards) have established a temporary camp right on the entrance and will defend the ruin with their lives. Two trained wargs come with them too.

The adventurers can defeat the Blue Heart tribesmen to gain access to the ruin but doing so earns them the hate of the Blue Heart tribe after the news of the attack spread. On the other hand, they may ask Haruk to speak with the witch leader. Perhaps there is a way to come to an understanding. 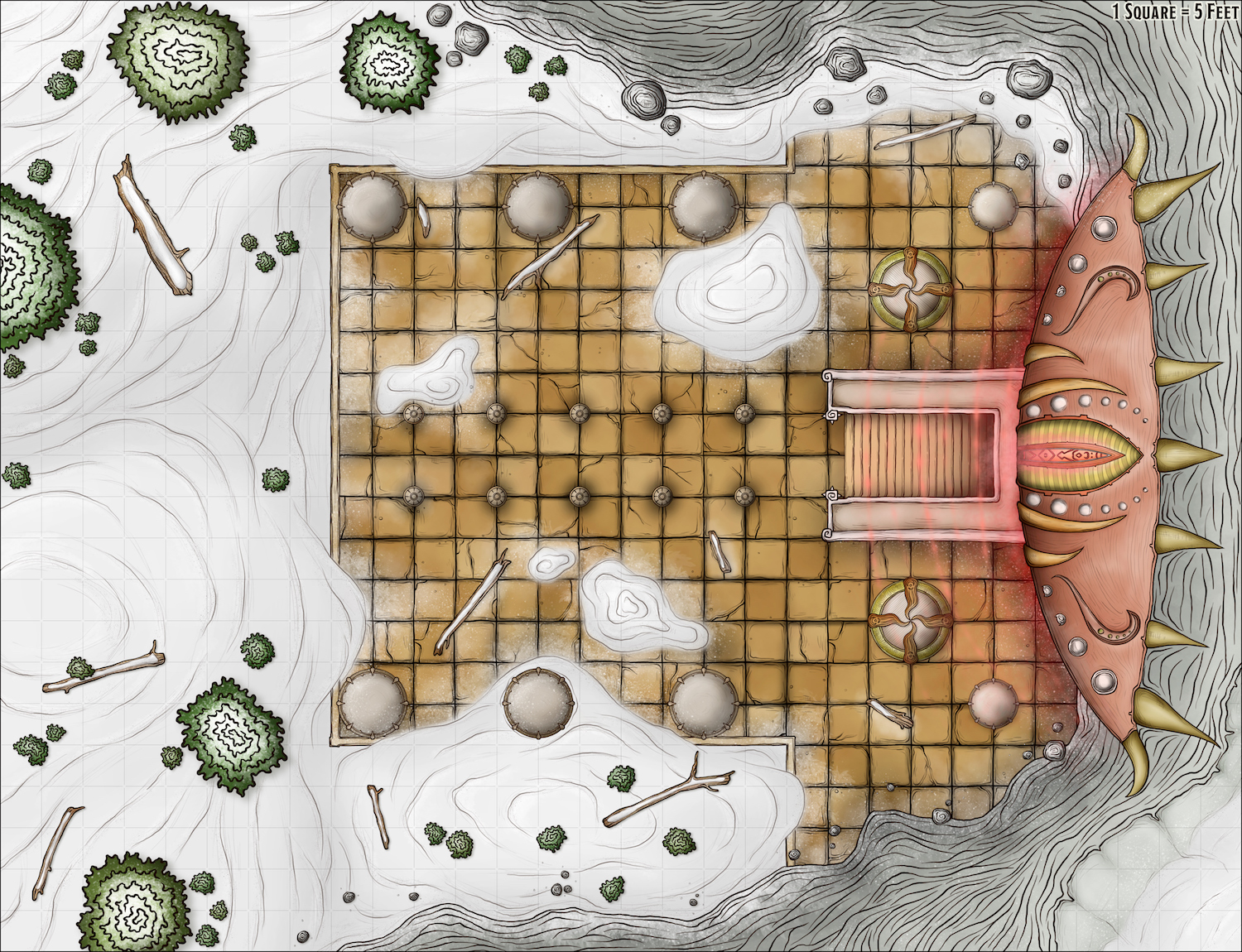