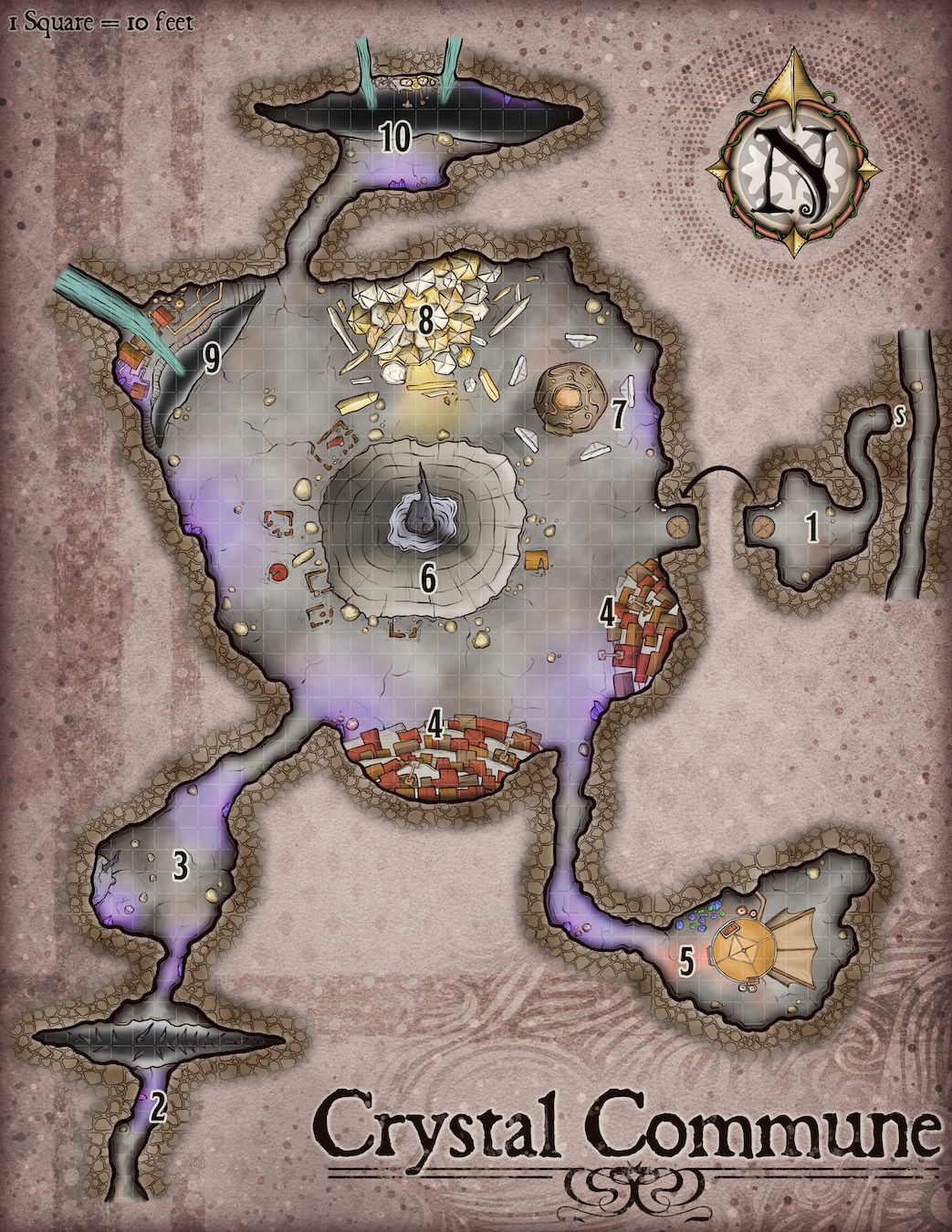 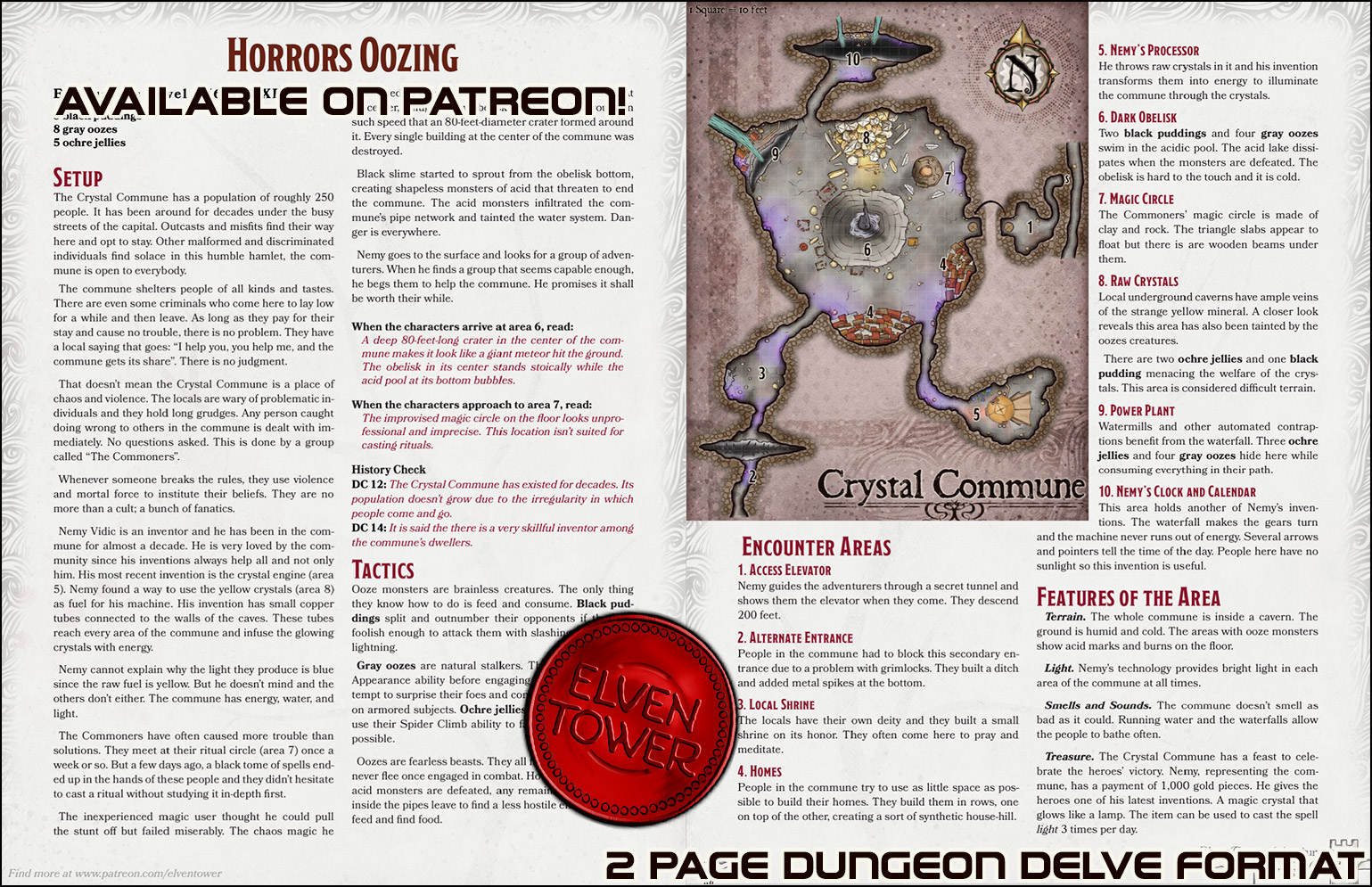 The Crystal Commune has a population of roughly 250 people. It has been around for decades under the busy streets of the capital. Outcasts and misfits find their way here and opt to stay. Other malformed and discriminated individuals find solace in this humble hamlet, the commune is open to everybody.

The commune shelters people of all kinds and tastes. There are even some criminals who come here to lay low for a while and then leave. As long as they pay for their stay and cause no trouble, there is no problem. They have a local saying that goes: “I help you, you help me, and the commune gets its share”. There is no judgment.

That doesn’t mean the Crystal Commune is a place of chaos and violence. The locals are wary of problematic individuals and they hold long grudges. Any person caught doing wrong to others in the commune is dealt with immediately. No questions asked. This is done by a group called “The Commoners”.

Whenever someone breaks the rules, they use violence and mortal force to institute their beliefs. They are no more than a cult; a bunch of fanatics.

Nemy Vidic is an inventor and he has been in the commune for almost a decade. He is very loved by the community since his inventions always help all and not only him. His most recent invention is the crystal engine (area 5). Nemy found a way to use the yellow crystals (area 8) as fuel for his machine. His invention has small copper tubes connected to the walls of the caves. These tubes reach every area of the commune and infuse the glowing crystals with energy.

Nemy cannot explain why the light they produce is blue since the raw fuel is yellow. But he doesn’t mind and the others don’t either. The commune has energy, water, and light.

The Commoners have often caused more trouble than solutions. They meet at their ritual circle (area 7) once a week or so. But a few days ago, a black tome of spells ended up in the hands of these people and they didn’t hesitate to cast a ritual without studying it in depth first.

The inexperienced magic user thought he could pull the stunt off but failed miserably. The chaos magic he attempted to master broke free inside the commune. At its center, a huge ebony obelisk burst from the ground in such speed that an 80-feet-diameter crater formed around it. Every single building at the center of the commune was destroyed.

Black slime started to sprout from the obelisk bottom, creating shapeless monsters of acid that threaten to end the commune. The acid monsters infiltrated the commune’s pipe network and tainted the water system. Danger is everywhere.

Nemy goes to the surface and looks for a group of adventurers. When he finds a group that seems capable enough, he begs them to help the commune. He promises it shall be worth their while.

When the characters arrive at area 6, read:

A deep 80-feet-long crater in the center of the commune makes it look like a giant meteor hit the ground. The obelisk in its center stands stoically while the acid pool at its bottom bubbles.

When the characters approach to area 7, read:

The improvised magic circle on the floor looks unprofessional and imprecise. This location isn’t suited for casting rituals.

DC 12: The Crystal Commune has existed for decades. Its population doesn’t grow due to the irregularity in which people come and go.

DC 14: It is said the there is a very skillful inventor among the commune’s dwellers.

Ooze monsters are brainless creatures. The only thing they know how to do is feed and consume. Black puddings split and outnumber their opponents if they are foolish enough to attack them with slashing weapons or lightning.

Gray oozes use their False Appearance ability before engaging in combat. They attempt to surprise their foes and concentrate their attacks on armored subjects. Ochre jellies attack on sight. They use their Spider Climb ability to fall on their enemies if possible.

Defeating the monsters in every area causes any remaining threat to flee. All oozes fight to the death.

Nemy guides the adventurers through the secret tunnel and shows them the elevator when they come. They descend 200 feet.

People in the commune had to block this secondary entrance due to a problem with grimlocks. They built a ditch and added metal spikes at the bottom.

The locals have their own deity and they built a small shrine on its honor. They often come here to pray and meditate.

People in the commune try to use as little space as possible to build their homes. They build them in rows, one on top of the other, creating a sort of synthetic house-hill.

This is Nemy’s machine. He throws raw crystals in it and his invention transforms them into energy to illuminate the commune through the crystals.

Two black puddings and four gray oozes swim in the acidic pool. The acid lake dissipates when the monsters are defeated. The obelisk is hard to the touch and it is cold.

The Commoners’ magic circle is made of clay and rock. The triangle slabs appear to float but there is are wooden beams under them.

Local underground caverns have ample veins of the strange yellow mineral. It looks like crystal and it is not hard to break. A closer look reveals this area has also been tainted by the oozes creatures.

There are two ochre jellies and one black pudding menacing the welfare of the crystals. Every square with crystals is considered difficult terrain.

The waterfall here is used to create mechanical energy. Watermills and other automated contraptions benefit from this. Three ochre jellies and four gray oozes hide here while consuming everything in their path.

This area holds another of Nemy’s inventions. The waterfall makes the gears turn and the machine never runs out of energy. Several arrows and pointers tell the time of the day. People here have no sunlight so this invention comes in handy for the commune.

Terrain. The whole commune is inside a cavern. The ground is humid and cold. The areas with ooze monsters show acid marks and burns on the floor.

Light. Nemy’s technology provides bright light in each area of the commune at all times.

Smells and Sounds. The commune doesn’t smell as bad as it could. Running water and the waterfalls allow the people to bathe often. The domed ceiling of the cavern makes all noises echo around.

Treasure. If the adventurers defeat all the oozes and acid monsters, the Crystal Commune has a feast to celebrate their victory. Nemy, in representation of the commune, has a payment of 1,000 gold pieces. He gives the heroes one of his latest inventions. A magic crystal that glows like a lamp. The item can be used to cast the spell light 3 times per day.