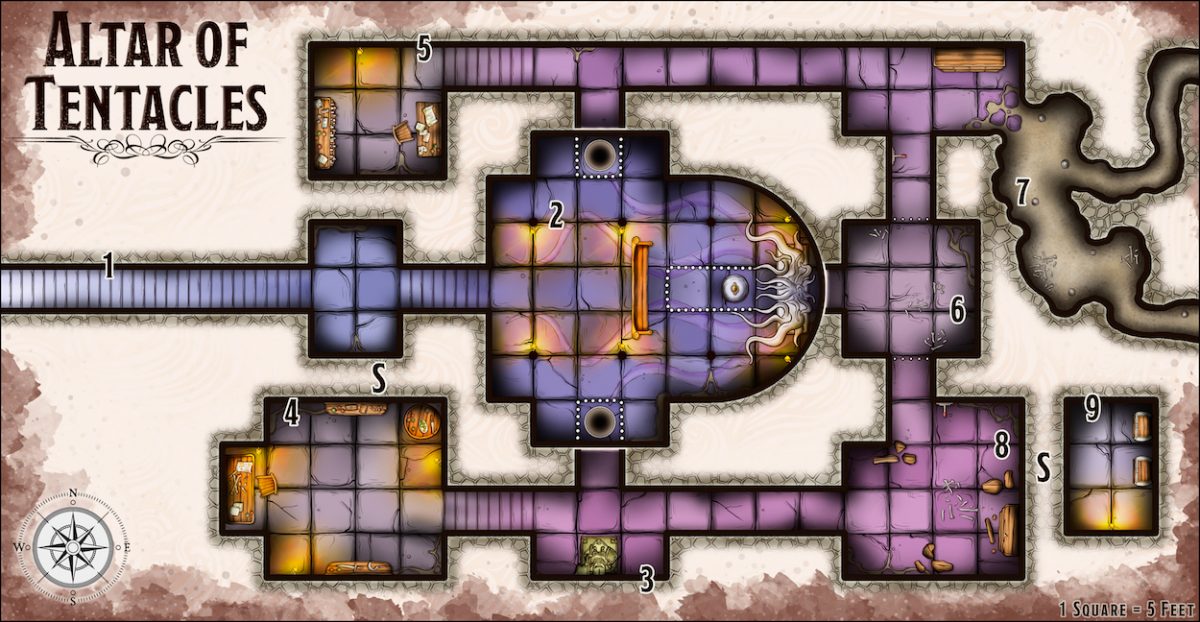 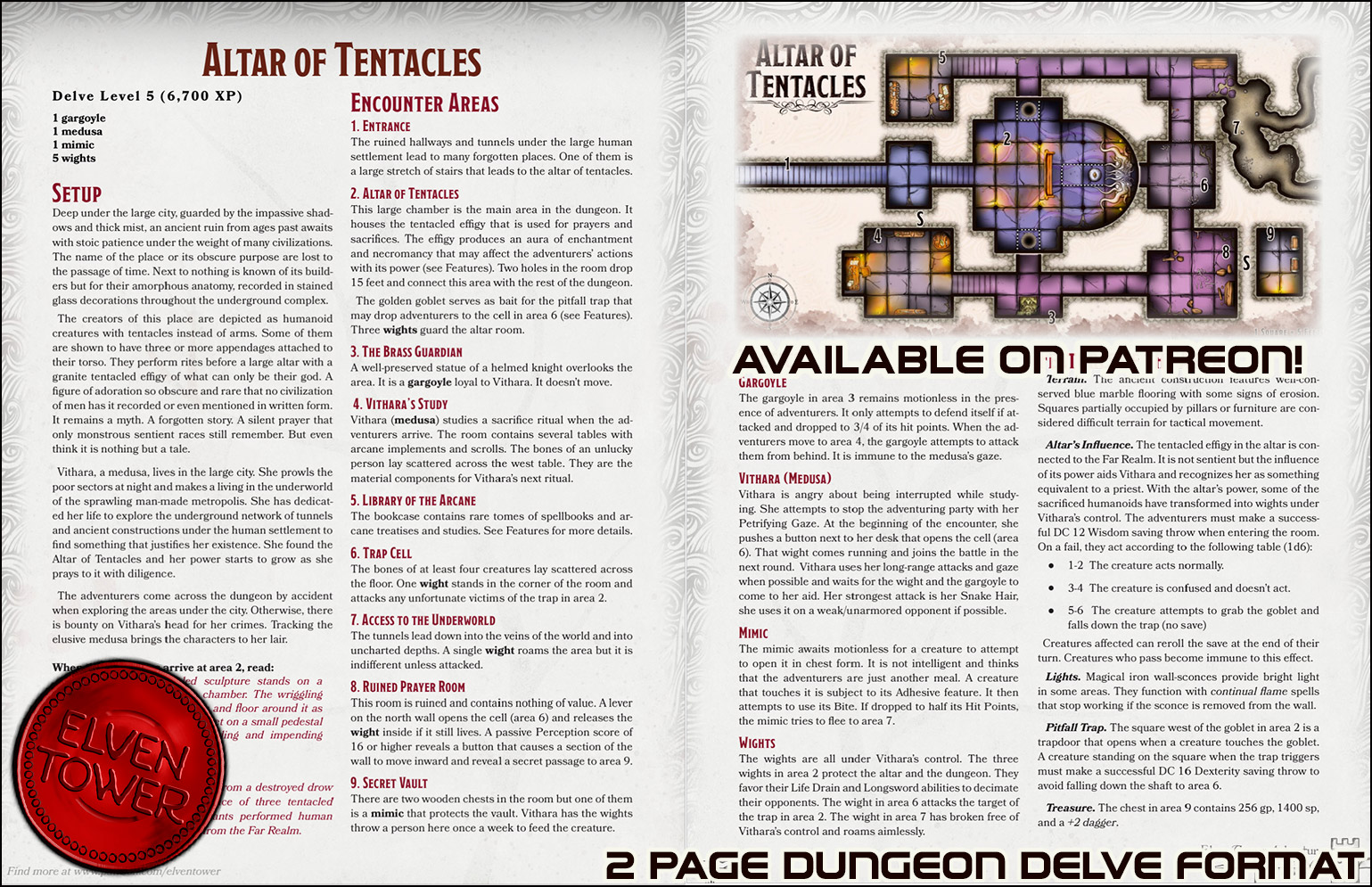 Deep under the large city, guarded by the impassive shadows and thick mist, an ancient ruin from ages past awaits with stoic patience under the weight of many civilizations.  The name of the place or its obscure purpose are lost to the passage of time. Next to nothing is known of its builders except for their amorphous anatomy, recorded in stained glass decorations throughout the underground complex.

The creators of this place are depicted as humanoid creatures with tentacles instead of arms. Some of them are shown to have three or more appendages attached to their torso, others have a short tentacle in place of a head. They perform rites before a large altar with a granite tentacled effigy of what can only be their god. A figure of adoration so obscure and rare that no civilization of men has it recorded or even mentioned in written form. It remains a myth. A forgotten story. A silent prayer that only monstrous sentient races still remember. But even think it is nothing but a tale.

Vithara, a medusa, lives in the large city. She prowls the poor sectors at night and makes a living in the underworld of the sprawling man-made metropolis. She has dedicated her life to explore the underground network of tunnels and ancient constructions under the human settlement to find something that justifies her existence. She found the Altar of Tentacles and her power starts to grow as she prays to it with diligence.

The adventurers may come across the dungeon by accident when exploring the city’s underground areas. Otherwise, a bounty is placed on Vithara’s head for her deeds in the city, and tracking the elusive medusa brings the characters to her lair.

When the characters arrive at area 2, read:

A large granite tentacled sculpture stands on a pedestal at the end of the chamber. The wriggling stone tentacles hug the walls and floor around it as if trying to reach a golden goblet on a small pedestal before it. A feeling of foreboding and impending danger fills the room.

DC 20: A stone tablet recovered from a destroyed drow settlement mentions the existence of three tentacled shrines where medusae covenants performed human sacrifices to appease an entity from the Far Realm.

The ruined hallways and tunnels under the large human settlement lead to many forgotten places. One of them is a large stretch of stairs that leads to the altar of tentacles.

This large chamber is the main area in the dungeon. It houses the tentacled effigy that is used for prayers and sacrifices. The effigy produces an aura of enchantment and necromancy that may affect the adventurers’ actions with its power (see Features). Two holes in the room drop 15 feet and connect this area with the rest of the dungeon.

The golden goblet serves as bait for the pitfall trap that may drop adventurers to the cell in area 6 (see Features). Three wights guard the altar room.

A well-preserved statue of a helmed knight overlooks the area. It is a gargoyle loyal to Vithara. It doesn’t move.

Vithara (medusa) studies a sacrifice ritual when the adventurers arrive. The room contains several tables with arcane implements and scrolls. The bones of an unlucky person lay scattered across the west table. They are the material components for Vithara’s next ritual.

The bones of at least four creatures lay scattered across the floor. One wight stands in the corner of the room and attacks any unfortunate victims of the trap in area 2.

The tunnels lead down into the veins of the world and into uncharted depths. A single wight roams the area but it is indifferent unless attacked.

This room is ruined and contains nothing of value. A lever on the north wall opens the cell (area 6) and releases the wight inside if it still lives. A passive Perception score of 16 or higher reveals a button that causes a section of the wall to move inward and reveal a secret passage to area 9.

There are two wooden chests in the room but one of them is a mimic that protects the vault. Vithara has the wights throw a person here once a week to feed the creature.

The gargoyle in area 3 remains motionless in the presence of adventurers. It only attempts to defend itself if attacked and dropped to 3/4 of its hit points. When the adventurers move to area 4, the gargoyle attempts to attack them from behind. It is immune to the medusa’s gaze.

Vithara is angry about being interrupted while studying. She attempts to stop the adventuring party with her Petrifying Gaze. At the beginning of the encounter, she pushes a button next to her desk that opens the cell (area 6). That wight comes running and joins the battle in the next round.  Vithara uses her long-range attacks and gaze when possible and waits for the wight and the gargoyle to come to her aid. Her strongest attack is her Snake Hair, she uses it on a weak/unarmored opponent if possible.

The mimic awaits motionless for a creature to attempt to open it in chest form. It is not intelligent and thinks that the adventurers are just another meal. A creature that touches it is subject to its Adhesive feature. It then attempts to use its Bite. If dropped to half its Hit Points, the mimic tries to flee to area 7.

Altar’s Influence. The tentacled effigy in the altar is connected to the Far Realm. It is not sentient but the influence of its power aids Vithara and recognizes her as something equivalent to a priest. With the altar’s power, some of the sacrificed humanoids have transformed into wights under Vithara’s control. The adventurers must make a successful DC 12 Wisdom saving throw when entering the room. On a fail, they act according to the following table (1d6):

Creatures affected can reroll the save at the end of their turn. Creatures who pass become immune to this effect.

Lights. Magical iron wall-sconces provide bright light in some areas. They function with continual flame spells that stop working if the sconce is removed from the wall.

Pitfall Trap. The square west of the goblet in area 2 is a trapdoor that opens when a creature touches the goblet. A creature standing on the square when the trap triggers must make a successful DC 16 Dexterity saving throw to avoid falling down the shaft to area 6. 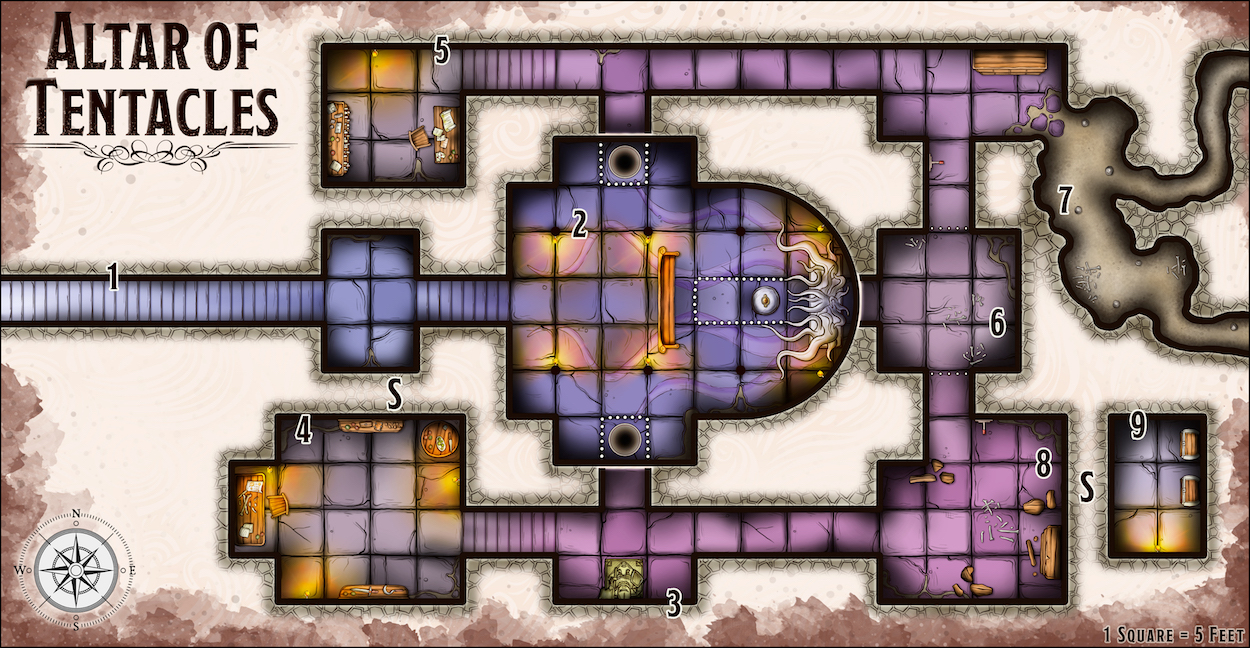