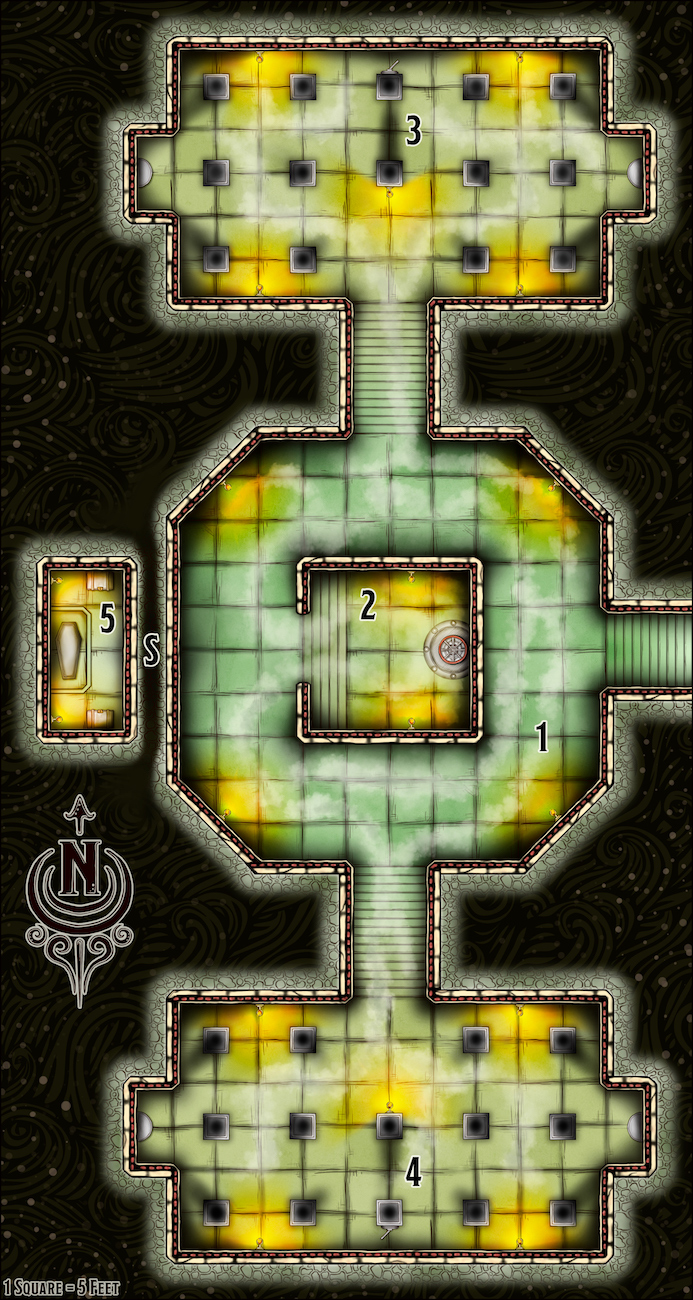 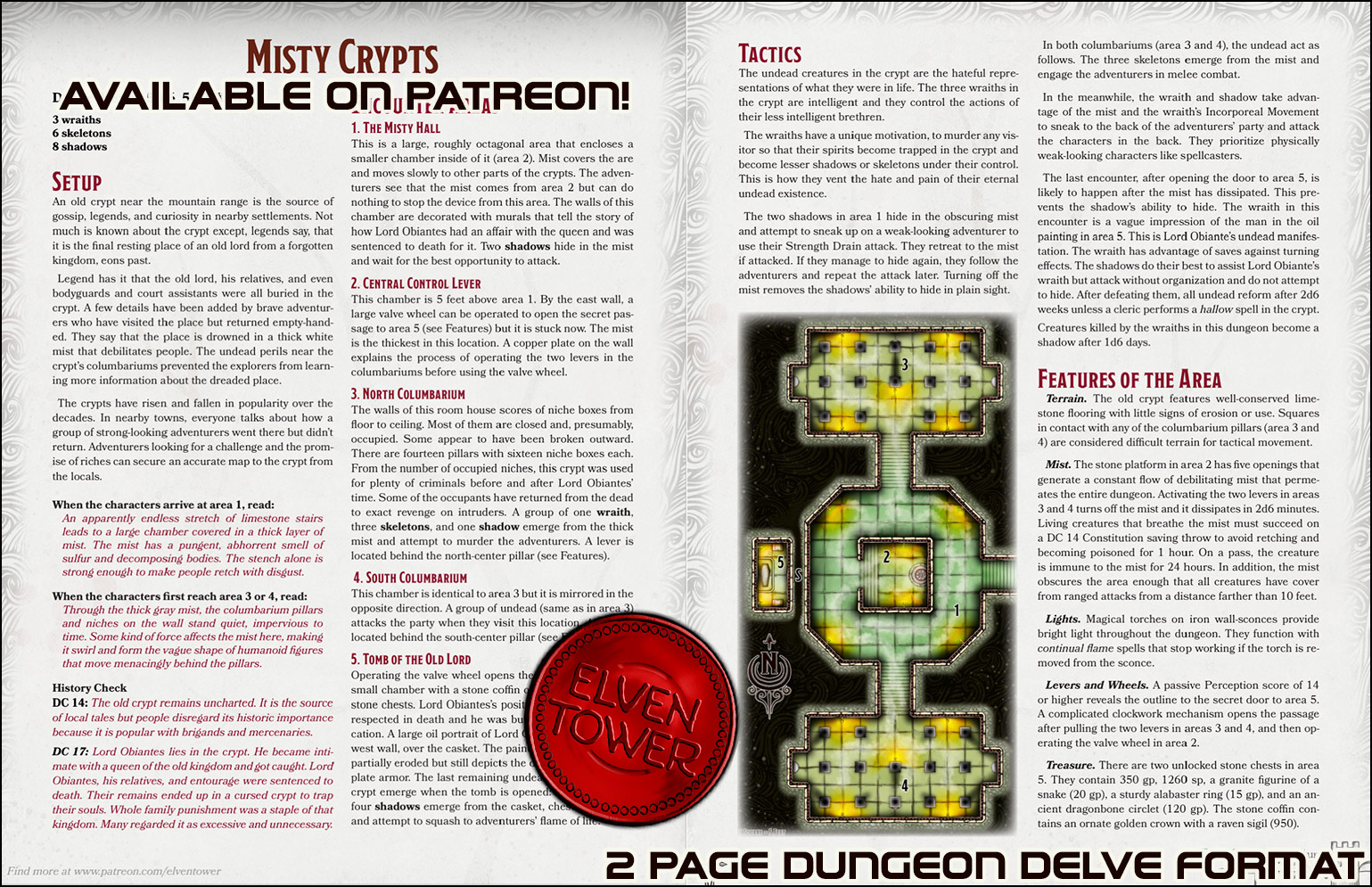 An old crypt near the mountain range is the source of gossip, legends, and curiosity in nearby settlements. Not much is known about the crypt except, legends say, that it is the final resting place of an old lord from a forgotten kingdom, eons past.

Legend has it that the old lord, his relatives, and even bodyguards and court assistants were all buried in the crypt. A few details have been added by brave adventurers who have visited the place but returned empty-handed. They say that the place is drowned in a thick white mist that debilitates people. The undead perils near the crypt’s columbariums prevented the explorers from learning more information about the dreaded place.

The crypts have risen and fallen in popularity over the decades. In nearby towns, everyone talks about how a group of strong-looking adventurers went there but didn’t return. Adventurers looking for a challenge and the promise of riches can secure an accurate map to the crypt from the locals.

When the characters arrive at area 1, read:

An apparently endless stretch of limestone stairs leads to a large chamber covered in a thick layer of mist. The mist has a pungent, abhorrent smell of sulfur and decomposing bodies. The stench alone is strong enough to make people retch with disgust.

When the characters first reach area 3 or 4, read:

Through the thick gray mist, the columbarium pillars and niches on the wall stand quiet, impervious to time. Some kind of force affects the mist here, making it swirl and form the vague shape of humanoid figures that move menacingly behind the pillars.

DC 14: The old crypt remains uncharted. It is the source of local tales but people disregard its historic importance because it is popular with brigands and mercenaries.

DC 17: Lord Obiantes is buried in the crypt. He became intimate with the queen of the old kingdom and got caught. Lord Obiantes, his relatives, and his servants were sentenced to death and their remains were placed in a cursed crypt to trap their souls. Whole family punishment was a staple of that kingdom. Many regarded it as excessive and unnecessary.

This is a large, roughly octagonal area that encloses a smaller chamber inside of it (area 2). Mist covers the are and moves slowly to other parts of the crypts. The adventurers see that the mist comes from area 2 but can do nothing to stop the device from this area. The walls of this chamber are decorated with murals that tell the story of how Lord Obiantes had an affair with the queen and was sentenced to death for it. Two shadows hide in the mist and wait for the best opportunity to attack.

This chamber is 5 feet above area 1. By the east wall, a large valve wheel can be operated to open the secret passage to area 5 (see Features) but it is stuck now. The mist is the thickest in this location. A copper plate on the wall explains the process of operating the two levers in the columbariums before using the valve wheel.

The walls of this room house scores of niche boxes from floor to ceiling. Most of them are closed and, presumably, occupied. Some appear to have been broken outward. There are fourteen pillars with sixteen niche boxes each. From the number of occupied niches, this crypt was used for plenty of criminals before and after Lord Obiantes’ time. Some of the occupants have returned from the dead to exact revenge on intruders. A group of one wraith, three skeletons, and one shadow emerge from the thick mist and attempt to murder the adventurers. A lever is located behind the north-center pillar (see Features).

This chamber is identical to area 3 but it is mirrored in the opposite direction. A group of undead (same as in area 3) attacks the party when they visit this location. A lever is located behind the south-center pillar (see Features).

Operating the valve wheel opens the secret passage to a small chamber with a stone coffin on a pedestal and two stone chests. Lord Obiantes’s position of superiority was respected in death and he was buried in this special location. A large oil portrait of Lord Obiantes hangs on the west wall, over the casket. The painting is discolored and partially eroded but still depicts the old lord in a majestic plate armor. The last remaining undead guardians in the crypt emerge when the tomb is opened: one wraith and four shadows emerge from the casket, chests, and walls and attempt to squash to adventurers’ flame of life.

The wraiths have a unique motivation, to murder any visitor so that their spirits become trapped in the crypt and become lesser shadows or skeletons under their control. This is how they vent the hate and pain of their eternal undead existence.

The two shadows in area 1 hide in the obscuring mist and attempt to sneak up on a weak-looking adventurer to use their Strength Drain attack. They retreat to the mist if attacked. If they manage to hide again, they follow the adventurers and repeat the attack later. Turning off the mist removes the shadows’ ability to hide in plain sight.

In both columbariums (area 3 and 4), the undead act as follows. The three skeletons emerge from the mist and engage the adventurers in melee combat.

In the meanwhile, the wraith and shadow take advantage of the mist and the wraith’s Incorporeal Movement to sneak to the back of the adventurers’ party and attack the characters in the back. They prioritize physically weak-looking characters like spellcasters.

The last encounter, after opening the door to area 5, is likely to happen after the mist has dissipated. This prevents the shadow’s ability to hide. The wraith in this encounter is a vague impression of the man in the oil painting in area 5. This is Lord Obiante’s undead manifestation. The wraith has advantage of saves against turning effects. The shadows do their best to assist Lord Obiante’s wraith but attack without organization and do not attempt to hide. After defeating them, all undead reform after 2d6 weeks unless a cleric performs a hallow spell in the crypt.

Creatures killed by the wraiths in this dungeon becomes a shadow after 1d6 days.

Terrain. The old crypt features well-conserved limestone flooring with little signs of erosion or use. Squares in contact with any of the columbarium pillars (area 3 and 4) are considered difficult terrain for tactical movement.

Mist. The stone platform in area 2 has five openings that generate a constant flow of debilitating mist that permeates the entire dungeon. Activating the two levers in areas 3 and 4 turns off the mist and it dissipates in 2d6 minutes. Living creatures that breathe the mist must succeed on a DC 14 Constitution saving throw to avoid retching and become poisoned for 1 hour. On a pass, the creature is immune to the mist for 24 hours. In addition, the mist obscures the area enough that all creatures have cover from ranged attacks from a distance farther than 10 feet.

Lights. Magical torches on iron wall-sconces provide bright light throughout the dungeon. They function with continual flame spells that stop working if the torch is removed from the sconce.

Levers and Wheels. A passive Perception score of 14 or higher reveals the outline to the secret door to area 5. A complicated clockwork mechanism opens the passage after pulling the two levers in areas 3 and 4, and then operating the valve wheel in area 2.

Treasure. There are two unlocked stone chests in area 5. They contain 350 gp, 1260 sp, a granite figurine of a snake (20 gp), a sturdy alabaster ring (15 gp), and an ancient dragonbone circlet (120 gp). The stone coffin contains an ornate golden crown with a raven sigil (950).