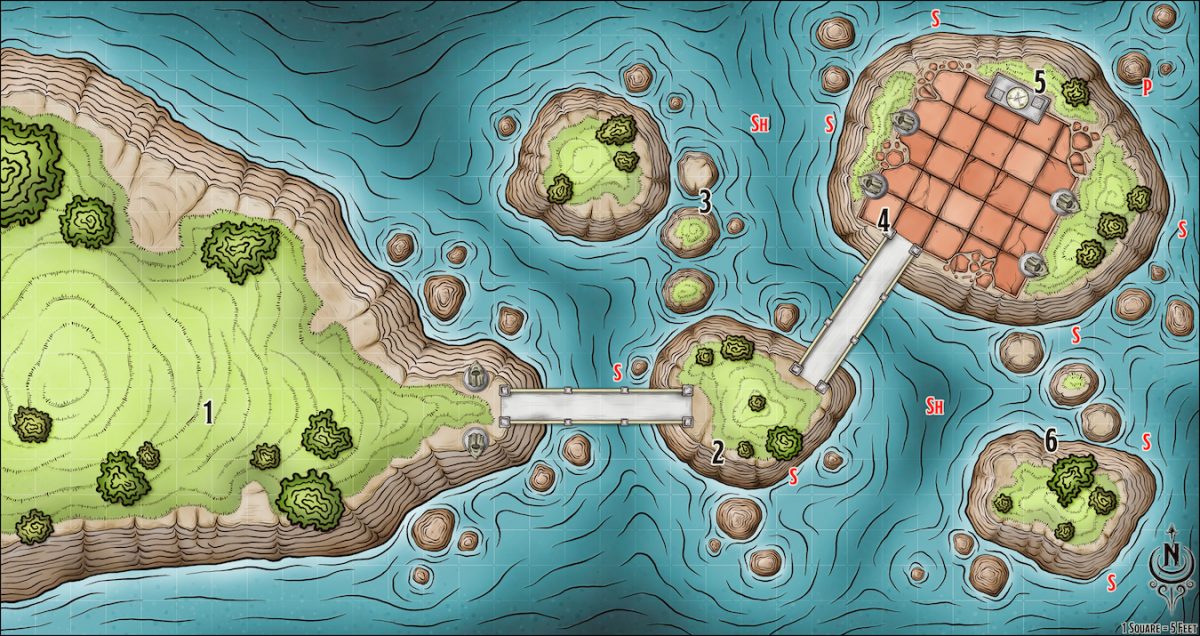 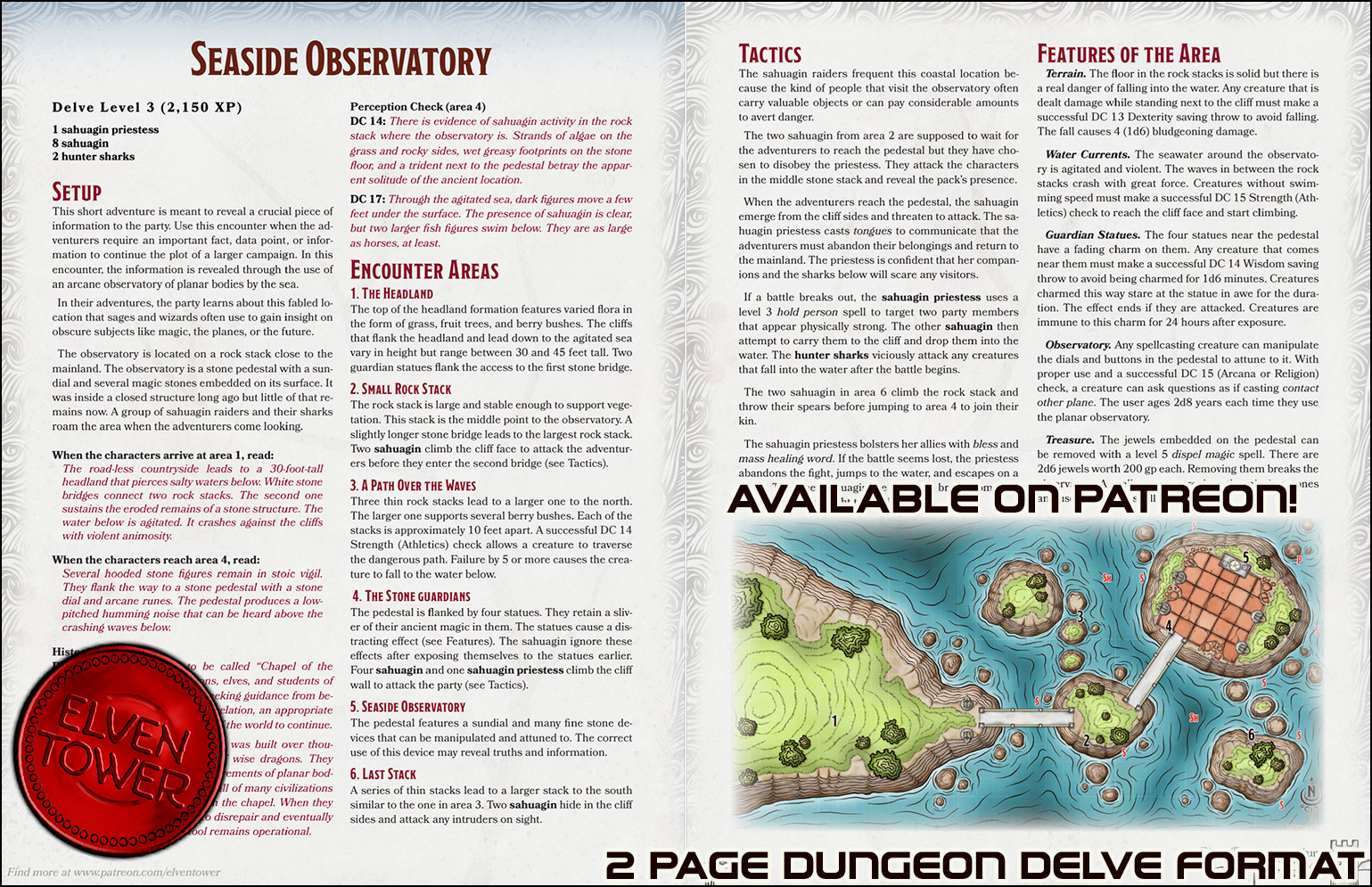 This short adventure is meant to reveal a crucial piece of information to the party. Use this encounter when the adventurers require an important fact, data point, or information to continue the plot of a larger campaign. In this encounter, the information is revealed through the use of an arcane observatory of planar bodies by the sea.

In their adventures, the party learns about this fabled location that sages and wizards often use to gain insight on obscure subjects like magic, the planes, or the future.

The observatory is located on a rock stack close to the mainland. The observatory is a stone pedestal with a sundial and several magic stones embedded on its surface. It was inside a closed structure long ago but little of that remains now. A group of sahuagin raiders and their sharks roam the area when the adventurers come looking.

When the characters arrive at area 1, read:

The road-less countryside leads to a 30-foot-tall headland that pierces salty waters below. White stone bridges connect two rock stacks. The second one sustains the eroded remains of a stone structure. The water below is agitated. It crashes against the cliffs with violent animosity.

When the characters reach area 4, read:

Several hooded stone figures remain in stoic vigil. They flank the way to a stone pedestal with a stone dial and arcane runes. The pedestal produces a low-pitched humming noise that can be heard above the crashing waves below.

DC 14: This place used to be called “Chapel of the Planes”. Over centuries, dragons, elves, and students of magic have come to this place seeking guidance from beyond. It is said that with each revelation, an appropriate cost must be paid for the balance of the world to continue.

DC 17: The Chapel of the Planes was built over thousands of years ago by a group of wise dragons. They studied the night skies and the movements of planar bodies. They predicted the rise and fall of many civilizations with the aid of the observatory in the chapel. When they passed away, the chapel fell into disrepair and eventually collapsed. The observatory tool remains operational.

DC 14: There is evidence of sahuagin activity in the rock stack where the observatory is. Strands of algae on the grass and rocky sides, wet greasy footprints on the stone floor, and a trident next to the pedestal betray the apparent solitude of the ancient location.

DC 17: Through the agitated sea, dark figures move a few feet under the surface. The presence of sahuagin is clear, but two larger fish figures swim below. They are as large as horses, at least.

The top of the headland formation features varied flora in the form of grass, fruit trees, and berry bushes. The cliffs that flank the headland and lead down to the agitated sea vary in height but range between 30 and 45 feet tall. Two guardian statues flank the access to the first stone bridge.

The rock stack is large and stable enough to support vegetation. This stack is the middle point to the observatory. A slightly longer stone bridge leads to the largest rock stack. Two sahuagin climb the cliff face to attack the adventurers before they enter the second bridge (see Tactics).

Three thin rock stacks lead to a larger one to the north. The larger one supports several berry bushes. Each of the stacks is approximately 10 feet apart. A successful DC 14 Strength (Athletics) check allows a creature to traverse the dangerous path. Failure by 5 or more causes the creature to fall to the water below.

The pedestal is flanked by four statues. They retain a sliver of their ancient magic in them. The statues cause a distracting effect (see Features). The sahuagin ignore these effects after exposing themselves to the statues earlier. Four sahuagin and one sahuagin priestess climb the cliff wall to attack the party (see Tactics).

The pedestal features a sundial and many fine stone devices that can be manipulated and attuned to. The correct use of this device may reveal truths and information.

A series of thin stacks lead to a larger stack to the south similar to the one in area 3. Two sahuagin hide in the cliff sides and attack any intruders on sight.

The sahuagin raiders frequent this coastal location because the kind of people that visit the observatory often carry valuable objects or can pay considerable amounts to avert danger.

The two sahuagin from area 2 are supposed to wait for the adventurers to reach the pedestal but they have chosen to disobey the priestess. They attack the characters in the middle stone stack and reveal the pack’s presence.

When the adventurers reach the pedestal, the sahuagin emerge from the cliff sides and threaten to attack. The sahuagin priestess casts tongues to communicate that the adventurers must abandon their belongings and return to the mainland. The priestess is confident that her companions and the sharks below will scare any visitors.

If a battle breaks out, the sahuagin priestess uses a level 3 hold person spell to target two party members that appear physically strong. The other sahuagin then attempt to carry them to the cliff and drop them into the water. The hunter sharks viciously attack any creatures that fall into the water after the battle begins.

The two sahuagin in area 6 climb the rock stack and throw their spears before jumping to area 4 to join their kin.

The sahuagin priestess bolsters her allies with bless and mass healing word. If the battle seems lost, the priestess abandons the fight, jumps to the water, and escapes on a shark. The other sahuagin are unable to break from their Blood Frenzy and fight to the death.

Terrain. The floor in the rock stacks is solid but there is a real danger of falling into the water. Any creature that is dealt damage while standing next to the cliff must make a successful DC 13 Dexterity saving throw to avoid falling. The fall causes 4 (1d6) bludgeoning damage.

Water Currents. The seawater around the observatory is agitated and violent. The waves in between the rock stacks crash with great force. Creatures without swimming speed must make a successful DC 15 Strength (Athletics) check to reach the cliff face and start climbing.

Guardian Statues. The four statues near the pedestal have a fading charm on them. Any creature that comes near them must make a successful DC 14 Wisdom saving throw to avoid being charmed for 1d6 minutes. Creatures charmed this way stare at the statue in awe for the duration. The effect ends if they are attacked. Creatures are immune to this charm for 24 hours after exposure.

Observatory. Any spellcasting creature can manipulate the dials and buttons in the pedestal to attune to it. With proper use and a successful DC 15 (Arcana or Religion) check, a creature can ask questions as if casting contact other plane. The user ages 2d8 years each time they use the planar observatory.

Treasure. The jewels embedded on the pedestal can be removed with a level 5 dispel magic spell. There are 2d6 jewels worth 200 gp each. Removing them breaks the observatory. A spellcaster can replace the missing stones and use a mending spell to repair it. 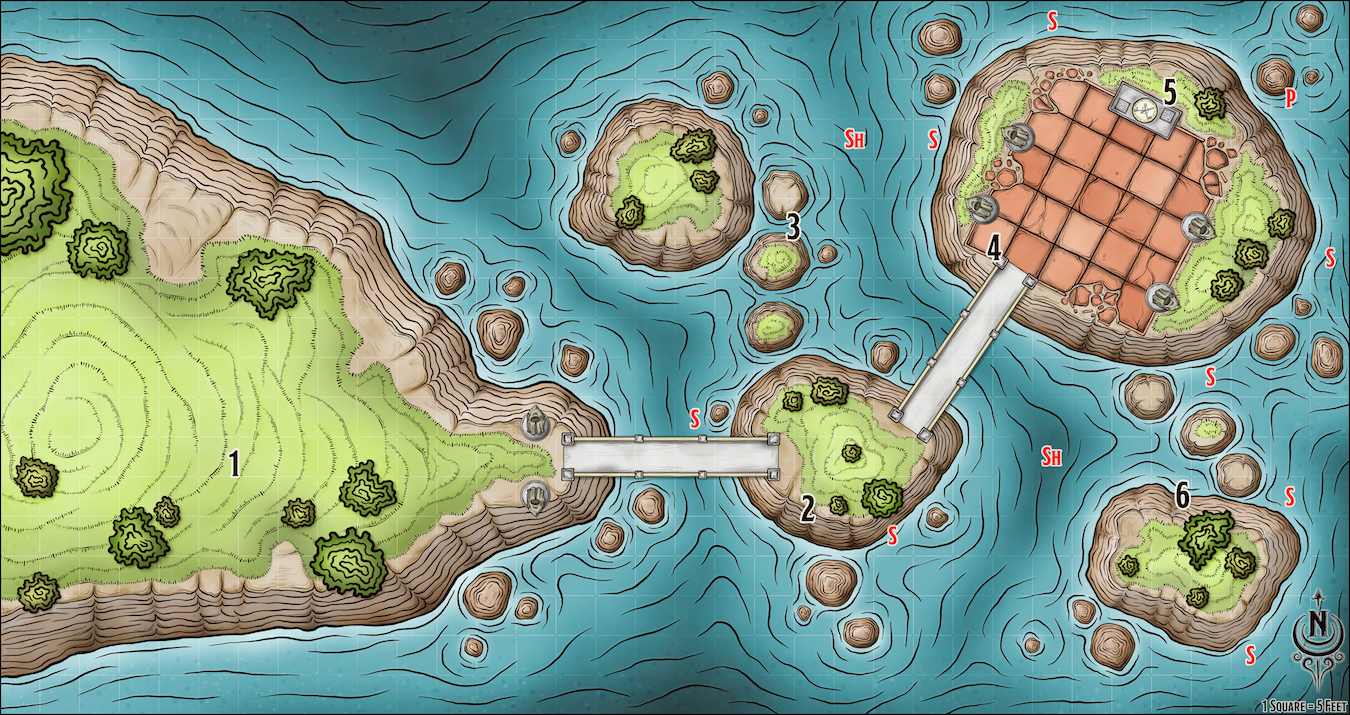