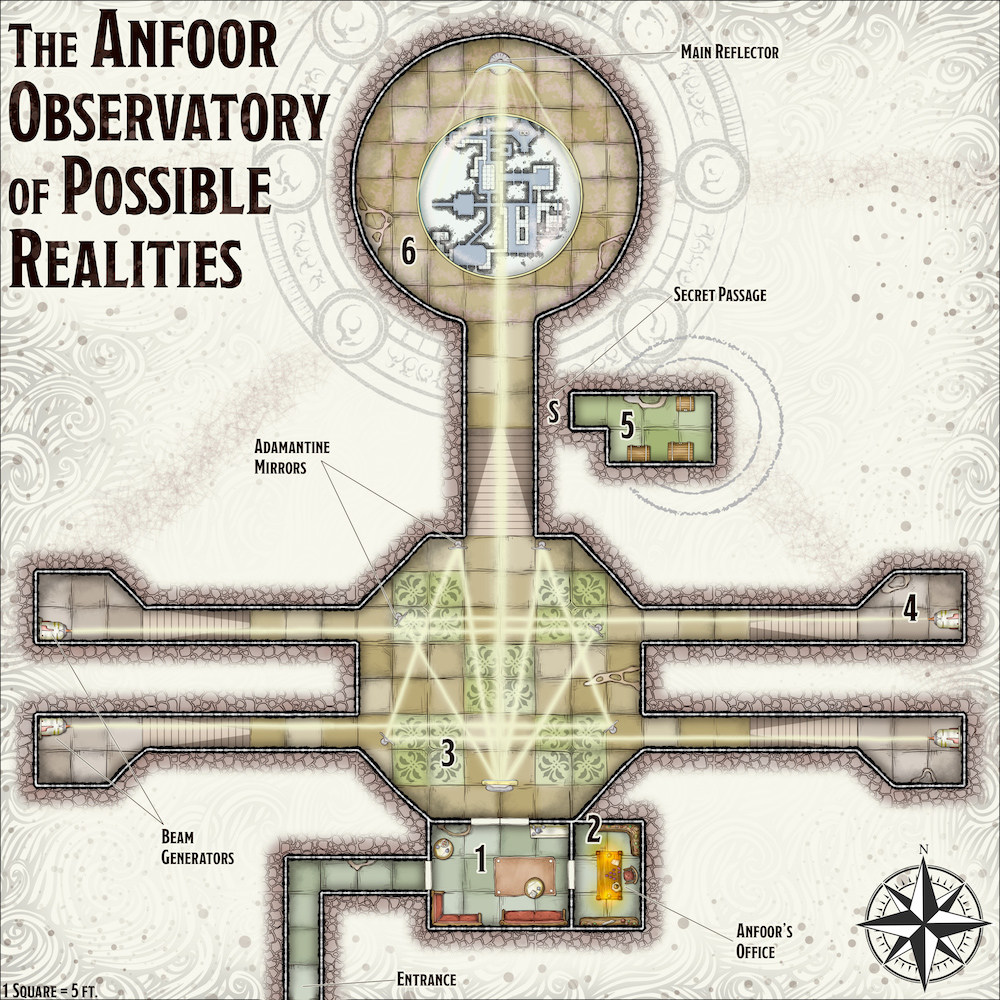 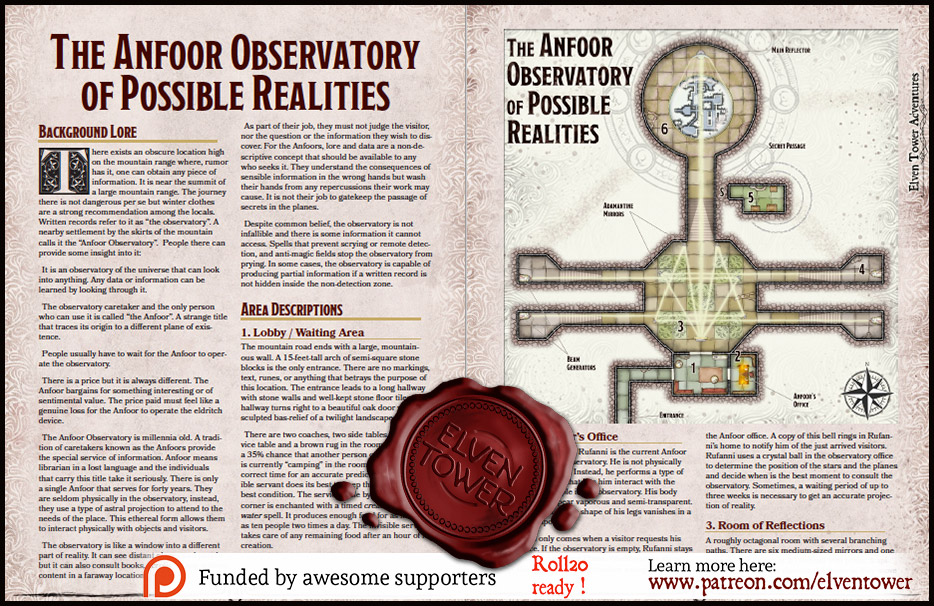 There exists an obscure location high on the mountain range where, rumor has it, one can obtain any piece of information. It is near the summit of a large mountain range. The journey there is not dangerous per se but winter clothes are a strong recommendation among the locals. Written records refer to it as “the observatory”. A nearby settlement by the skirts of the mountain calls it the “Anfoor Observatory”.  People there can provide some insight into it:

The Anfoor Observatory is millennia old. A tradition of caretakers known as the Anfoors provide the special service of information. Anfoor means librarian in a lost language and the individuals that carry this title take it seriously. There is only a single Anfoor that serves for forty years. They are seldom physically in the observatory, instead, they use a type of astral projection to attend to the needs of the place. This ethereal form allows them to interact physically with objects and visitors.

The observatory is like a window into a different part of reality. It can see distant places and people but it can also consult books, scrolls, or any written content in a faraway location.

As part of their job, they must not judge the visitor, nor the question or the information they wish to discover. For the Anfoors, lore and data are a non-descriptive concept that should be available to any who seeks it. They understand the consequences of sensible information in the wrong hands but wash their hands from any repercussions their work may cause. It is not their job to gatekeep the passage of secrets in the planes.

The mountain road ends with a large, mountainous wall. A 15-feet-tall arch of semi-square stone blocks is the only entrance. There are no markings, text, runes, or anything that betrays the purpose of this location. The entrance leads to a long hallway with stone walls and well-kept stone floor tiles. The hallway turns right to a beautiful oak door with a sculpted bas-relief of a twilight landscape.

There are two coaches, two side tables, a service table and a brown rug in the room. There is a 35% chance that another person or small group is currently “camping” in the room, waiting for the correct time for an accurate prediction. An invisible servant does its best to keep the place in the best condition. The service table by the northeast corner is enchanted with a timed create food and water spell. It produces enough food for as many as ten people two times a day. The invisible servant takes care of any remaining food after an hour of its creation.

A gith monk named Rufanni is the current Anfoor in charge of the observatory. He is not physically in the observatory. Instead, he performs a type of astral projection that lets him interact with the objects and people in the observatory. His body and clothes appear vaporous and semi-transparent. Below the waist, the shape of his legs vanishes in a cloud of vapor.

Rufanni only comes when a visitor requests his presence. If the observatory is empty, Rufanni stays at home in the Astral Plane. When visitors show up, the invisible servant touches a magical bell in the Anfoor office. A copy of this bell rings in Rufanni’s home to notify him of the just arrived visitors. Rufanni uses a crystal ball in the observatory office to determine the position of the stars and the planes and decide when is the best moment to consult the observatory. Sometimes, a waiting period of up to three weeks is necessary to get an accurate projection of reality.

A roughly octagonal room with several branching paths. There are six medium-sized mirrors and one large mirror on top of 20-feet-tall iron posts. A spider web of light rays dissects the room as they move from mirror to mirror and collect their energy in the large mirror. A brighter and denser beam of light moves northwards from the larger mirror. The light looks different from normal light rays. It looks denser, as if it had some corporeal qualities. Sometimes it appears as if it were a mix of flowing liquid and quasi-material plasma.

After a short flight of ascending stairs, an arcane device powered by orange-glowing crystals is the only thing in this chamber. Only the Anfoor knows the command words to activate or deactivate the beam generators. A successful DC 17 Intelligence (Arcana) check reveals that the device draws energy and mass from the ethereal plane and projects it in a tight beam. This type or eldritch machine is not used anywhere else. Perhaps the technology is well guarded or lost.

A passive Perception score of 18 or higher or a successful DC 18 Wisdom (Perception) check reveals the presence of a removable section of the wall. A person must push two switch-bricks at the same time to activate a mechanism that slides the wall to the side and reveal a hidden passage. There are several unlocked wooden chests inside the room. They contain boxes of papers, documents, and images of important things that the current Anfoor has seen through the observatory over the past thirty years. Some of the information and documents here have invaluable worth to the appropriate buyer.

The focused light beam hits an 8-feet-wide curved mirror that diffuses the light and reflects it down into the 20-feet-wide circular pond in the middle of the room. The pond is two-inches-deep and the crystal-clear water appears calm. Most of the time, the light projected on the water mirror manifests as a changing mix of colors and shapes with no clear purpose. Only the Anfoor can manipulate the device to activate it. The Anfoor stands under the curved mirror and chants an arcane incantation that includes the question of information that the visitors want to learn. If the moment is right, the projection on the floor changes and reveals pieces of information that could be acquired in no other way. It can reveal the location of an individual across the planes. It can show a detailed map of a fabled object or place. It can even reveal the identity of a masked individual or entity. The scope and power of the observatory are only limited by the Anfoor’s ability to relate the question to a particular moment in time and space by analyzing the stars and the movements of the astral bodies. If the Anfoor chooses the correct time, anything can be learned in the observatory. The observatory cannot see the future or respond to information that has not come to pass.

The average waiting time is 1-2 weeks before the moment is right. The more detailed and obscure the information to be learned is, the more time waiting for the appropriate window of opportunity. The longest Rufanni has had a visitor wait for a prediction is eight months.

Terrain. The stone tiles in the observatory show slight signs of erosion and use but they are well kept in most places. Any square partially occupied with an object is considered difficult terrain.

Doors. The regal wooden doors have intricate bas-reliefs that depict incredible landscapes. The sculpted sceneries follow the wooden grain and create a marvelous spectacle. Each door is worth 150 gold coins if removed and sold. The door to the Anfoor’s Office features a high-end lock. An adventurer can bypass such a lock with a successful DC 16 Dexterity (Thieves Tools) check.

Light. All areas in the observatory are in bright light except for the vault (Area 5)

Beams. Four different arcane devices (Area 4) known as beam generators produce rays of dense light. The central area of the observatory features many mirrors that redirect and focus the light northward to the main reflector. All mirrors rest on 20-feet-tall iron posts so the rays are also elevated.

Special Feature – This upper side of this illustration features a map graphic by Dyson Logos from the publicly commercial illustrations in his collection. Used with Permission.