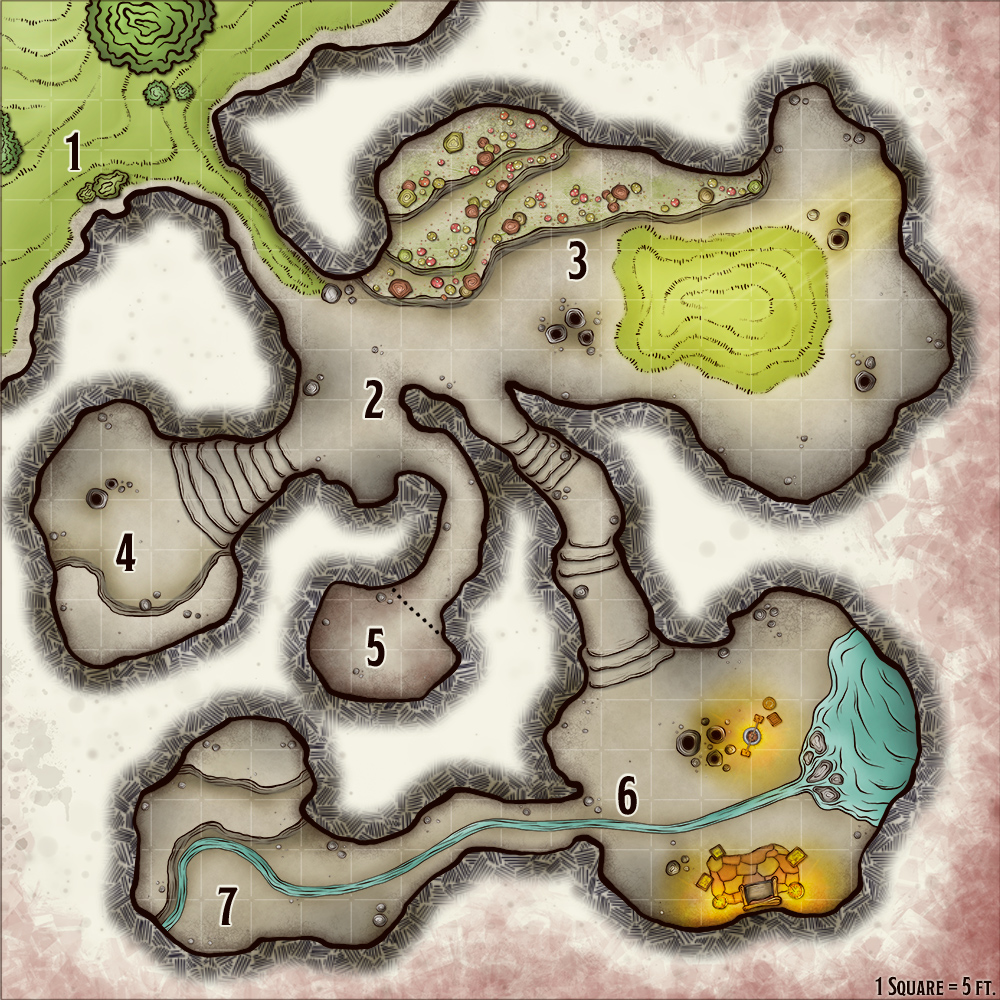 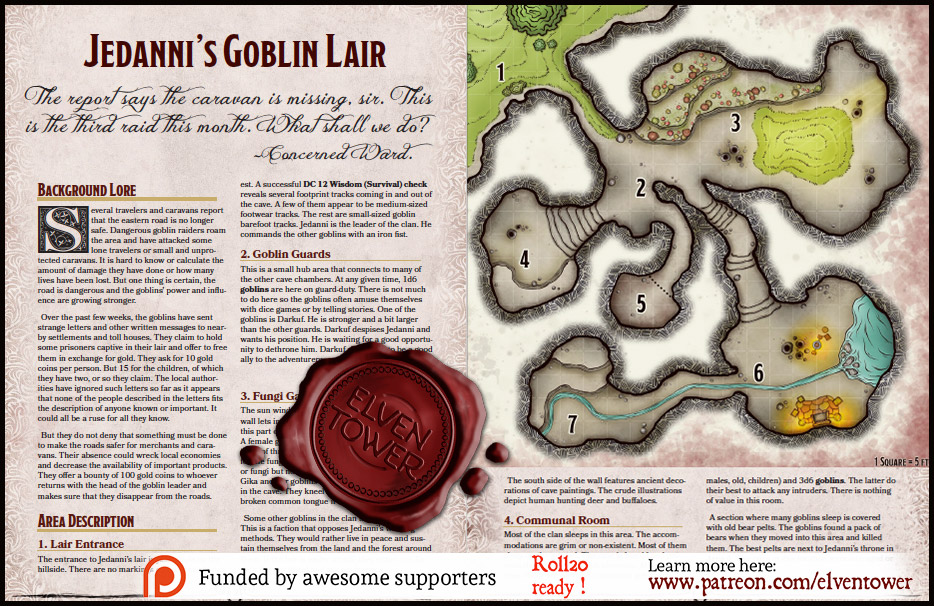 Several travelers and caravans report that the eastern road is no longer safe. Dangerous goblin raiders roam the area and have attacked some lone travelers or small and unprotected caravans. It is hard to know or calculate the amount of damage they have done or how many lives have been lost. But one thing is certain, the road is dangerous and the goblins’ power and influence are growing stronger.

Over the past few weeks, the goblins have sent strange letters and other written messages to nearby settlements and toll houses. They claim to hold some prisoners captive in their lair and offer to free them in exchange for gold. They ask for 10 gold coins per person. But 15 for the children, of which they have two, or so they claim. The local authorities have ignored such letters so far as it appears that none of the people described in the letters fits the description of anyone known or important. It could all be a ruse for all they know.

But they do not deny that something must be done to make the roads safer for merchants and caravans. Their absence could wreck local economies and decrease the availability of important products. They offer a bounty of 100 gold coins to whoever returns with the head of the goblin leader and makes sure that they disappear from the roads.

The entrance to Jedanni’s lair is just a hole on the hillside. There are no markings or features of interest. A successful DC 12 Wisdom (Survival) check reveals several footprint tracks coming in and out of the cave. A few of them appear to be medium-sized footwear tracks. The rest are small-sized goblin barefoot tracks. Jedanni is the leader of the clan. He commands the other goblins with an iron fist.

This is a small hub area that connects to many of the other cave chambers. At any given time, 1d6 goblins are here on guard-duty. There is not much to do here so the goblins often amuse themselves with dice games or by telling stories. One of the goblins is Darkuf. He is stronger and a bit larger than the other guards. Darkuf despises Jedanni and wants his position. He is waiting for a good opportunity to dethrone him. Darkuf may prove to be a good ally to the adventurers.

The sun window on the upper east section of the wall lets in just enough light and humidity to make this part of the cave the perfect spot to grow fungi. A female goblin named Gika is the chief farmer. A team of three other goblins helps her grow and care for the fungi. The clan prefers meat over vegetables or fungi but no one says no when food is scarce. Gika and her goblins do not oppose any intruders in the cave. They kneel and beg for their lives in broken common tongue if it comes to it.

Some other goblins in the clan believe in Gika. This is a faction that opposes Jedanni’s warring methods. They would rather live in peace and sustain themselves from the land and the forest around them. If the lair is under attack, they either run for their lives or kneel and ask for mercy.

The south side of the wall features ancient decorations of cave paintings. The crude illustrations depict human hunting deer and buffaloes.

Most of the clan sleeps in this area. The accommodations are grim or non-existent. Most of them sleep on the ground. The cave is humid and protects them from the harsh elements. At any given time, there are 6d8 non-combatant goblins (females, old, children) and 3d6 goblins. The latter do their best to attack any intruders. There is nothing of value in this room.

A section where many goblins sleep is covered with old bear pelts. The goblins found a pack of bears when they moved into this area and killed them. The best pelts are next to Jedanni’s throne in Area 6. The ones in this location were damaged or useless.

When Jedanni’s goblins attack a caravan, travelers, or small settlements, they often bring some prisoners with them and put them in this cell. The cage bars consist of improvised tree trunks set in an angle against the ceiling. Jedanni has tried to sell some of the prisoners back to the settlements in exchange for a monetary reward. This plan has failed so far. It appears that most travelers are not worth paying for or they come from farther places and nobody knows them. This is why Jedanni is looking for an important local to kidnap. There are six adults and two children currently in the cell. They are malnourished and weak.

This room is a large chamber with an underground pond and a narrow stream that goes west. A medium-sized wooden throne painted in red and gold sits by the southern wall. A rug of pelts and leather extends beyond the throne a few feet. Two burning braziers and a few boxes of gold and trinkets surround the throne. Jedanni sits royally in this throne and commands the clan. Jedanni is taller and buffer than the other goblins but still smaller than an average human. His abnormal size, muscular strength, and gift for cruelty are the reason why most goblins in the clan fear and obey him without question.

Jedanni (goblin with maxed out HP and a +4 bonus to STR and CON) is never alone. At any given time, there are 2d6 non-combatant goblins in the room, 2d6 goblins, and a wolf loyal to him. The collective value of the gold coffers near the throne is 108 gold coins.

This chamber is Jedanni’s vault and sometimes sleeping chamber. There is a pelt on the floor where he sleeps. A long dagger resting on top of the pelt shows marks of dried blood. There are many varied objects around the room in disarray. These correspond to the stolen assets that the goblin clan took from several caravans and travelers. Most of the stuff has little monetary value for the goblins unless they find a way to sell it for gold, like wheat, spices, and some delicate fabrics. A horse-drawn cart is needed to haul the contents of this room back to civilization. The collective value of these items, when sold at a city market, is 40 gold coins.

If Jedanni dies or runs away to save his life but the adventurers spare the non-aggressive faction in the clan, there are two alternatives for its future. If Darkuf survived, he takes over the clan within a week and the clan returns to their usual activities under new leadership. Nothing is changed except for the fact that Darkuf is a weaker leader and the clan is not better off with fewer members.

If both Jedanni and Darkuf are gone, Gika takes over the clan and becomes the first matriarch for this particular clan. She commands the clan to abandon their olden ways and pledge to sustain their weakened numbers from the fungi gardens and the forest around them. The road attacks stop and the clan starts to thrive.

Jedanni’s clan lives in a small cavernous complex under a forested hill. The caves appear natural in origin. There is evidence that a pack of bears lived in here for a while long ago. Some of the walls are decorated with ancient rock paintings from an old human civilization.

Terrain. The cave natural floor is rough but even. The goblins sculpted the stair steps in some of the passageways to make passage easier. Other than that, the floor evenness is a result of the constant transit of the cave’s dwellers. Water drippings from the ceiling have caused the formation of stalagmites in many chambers in the cave. Squares partially occupied with a rock, stalagmite, or other objects are considered difficult terrain.

Light. Most of the areas in the cave are in complete darkness. Area 3 has an opening in the upper east wall. A halo of sunlight comes in during the day and provides bright light in the middle of the room; the rest of it is in dim light. There are two braziers and a wood stove in Area 6 that provide a 15-feet-radius of bright light.

Smells and Sounds. The exotic smells from the fungi garden give the cave a sensation of verdant greenery mixed with decay and goblin filth. If an adventurer manages to enter the cave unannounced, goblin chatter and laughter fill the air.