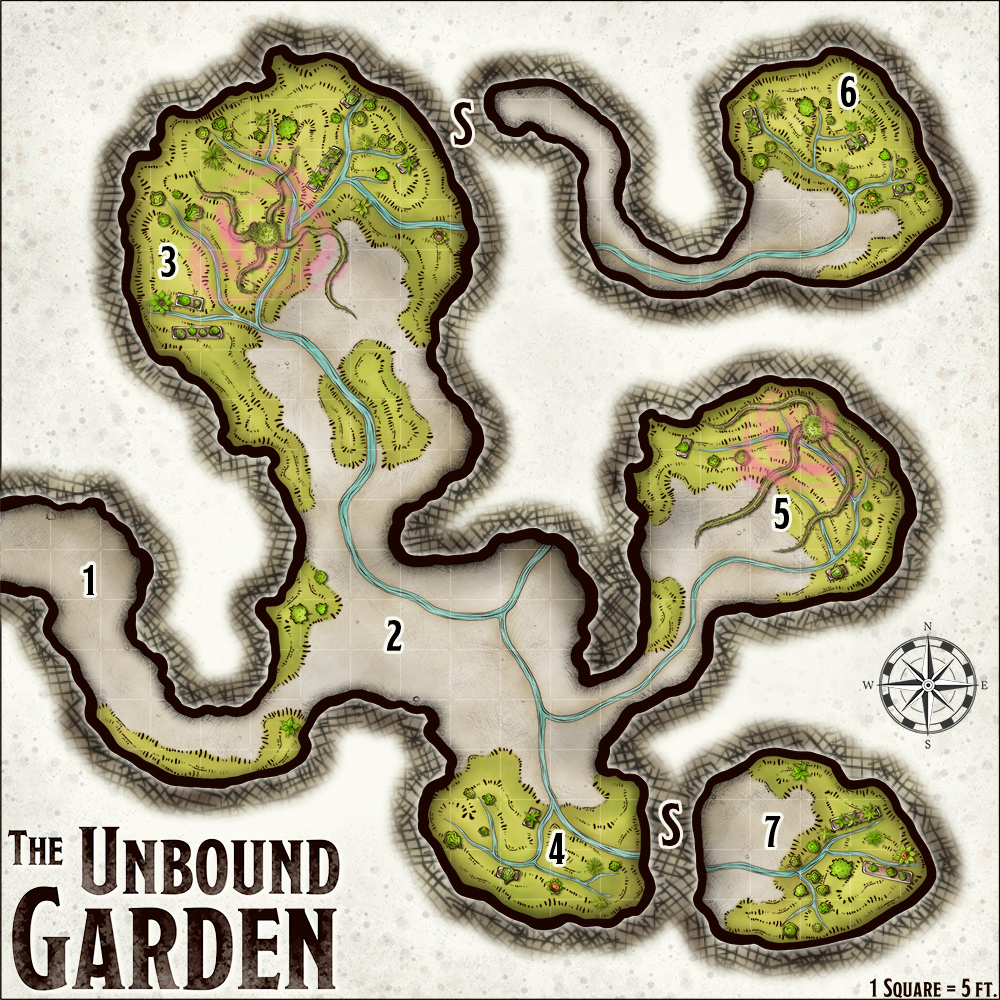 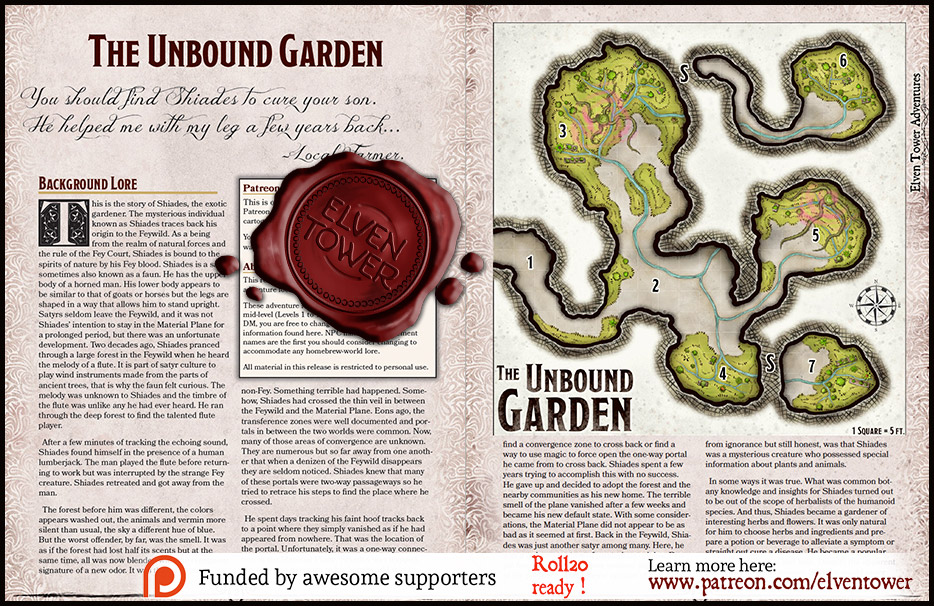 This is the story of Shiades, the exotic gardener. The mysterious individual known as Shiades traces back his origin to the Feywild. As a being from the realm of natural forces and the rule of the Fey Court, Shiades is bound to the spirits of nature by his Fey blood. Shiades is a satyr, sometimes also known as a faun. He has the upper body of a horned man. His lower body appears to be similar to that of goats or horses but the legs are shaped in a way that allows him to stand upright. Satyrs seldom leave the Feywild, and it was not Shiades’ intention to stay in the Material Plane for a prolonged period, but there was an unfortunate development. Two decades ago, Shiades pranced through a large forest in the Feywild when he heard the melody of a flute. It is part of satyr culture to play wind instruments made from the parts of ancient trees, that is why the faun felt curious. The melody was unknown to Shiades and the timbre of the flute was unlike any he had ever heard. He ran through the deep forest to find the talented flute player.

After a few minutes of tracking the echoing sound, Shiades found himself in the presence of a human lumberjack. The man played the flute before returning to work but was interrupted by the strange Fey creature. Shiades retreated and got away from the man.

The forest before him was different, the colors appear washed out, the animals and vermin more silent than usual, the sky a different hue of blue. But the worst offender, by far, was the smell. It was as if the forest had lost half its scents but at the same time, all was now blended with the repugnant signature of a new odor. It was that of humanoids, non-Fey. Something terrible had happened. Somehow, Shiades had crossed the thin veil in between the Feywild and the Material Plane. Eons ago, the transference zones were well documented and portals in between the two worlds were common. Now, many of those areas of convergence are unknown. They are numerous but so far away from one another that when a denizen of the Feywild disappears they are seldom noticed. Shiades knew that many of these portals were two-way passageways so he tried to retrace his steps to find the place where he crossed.

He spent days tracking his faint hoof tracks back to a point where they simply vanished as if he had appeared from nowhere. That was the location of the portal. Unfortunately, it was a one-way connection to the Material Plane. Shiades was trapped. His only way to return to his homeworld was to find a convergence zone to cross back or find a way to use magic to force open the one-way portal he came from to cross back. Shiades spent a few years trying to accomplish this with no success. He gave up and decided to adopt the forest and the nearby communities as his new home. The terrible smell of the plane vanished after a few weeks and became his new default state. With some considerations, the Material Plane did not appear to be as bad as it seemed at first. Back in the Feywild, Shiades was just another satyr among many. Here, he was a unique creature of mysterious origins. People from nearby towns gave esoteric significance to his presence. The general opinion of him, born from ignorance but still honest, was that Shiades was a mysterious creature who possessed special information about plants and animals.

In some ways it was true. What was common botany knowledge and insights for Shiades turned out to be out of the scope of herbalists of the humanoid species. And thus, Shiades became a gardener of interesting herbs and flowers. It was only natural for him to choose herbs and ingredients and prepare a potion or beverage to alleviate a symptom or straight out cure a disease. He became a popular source of medicines and help. Despite the apparent popularity he could muster, Shiades would never stop to be what he was. He found happiness in the absurd loneliness of the forests and the natural sounds of the wind and animals.

Shiades found a cozy cave in a large rocky hill and claimed it as his home. Inside, it was perfect. Small water streams fed large patches of a particular strain of grass that grew without direct sunlight. It was humid yet not cold. And it was far enough from the nearest settlements so that Shiades would not have to deal with humans often. Only when a person was ill or needed help would they venture to his cave. Shiades would still visit some of the settlements from time to time to sell his potions. The stranded satyr had no use for money or gold coins. Instead, he tried to barter his wares for whatever caught his interest. He had a particular habit to exchange his medicines for alcoholic drinks.

A month ago, Shiades tripped on an overgrown weed and dropped a powerful growth concoction by accident and the substance caused some plants to grow fast and merge into a more complex plant life form. The new plant appears like a large shrub with several whip-like vine tentacles. The strange plant is aggressive and territorial. Shiades still cares for some areas within the cave but the plant monster grows and claims more territory as days go on. Last week, it somehow split and now there are two of those aggressive plant life forms. Shiades has tried everything to either control or kill the two giant plants but they are too resilient. The helpless satyr is now in one of the nearby towns trying to get some help from either the locals or strong looking travelers.

The cave opens up and becomes a hole on the side of the cliff face. Shiades marked three rocks by the entrance with Fey runes that spell “Shiades Master Gardener”. The smell of greenery and humid plant life grows stronger as one approaches the main chamber.

This cavernous chamber is located roughly in the middle of the garden. Faint lights from the various bioluminescent sources point the walls of the caverns. Some patches of the floor by the entrance are covered by a particular kind of obscure grass that requires no direct sunlight.

One of the large aggressive life forms is lodged in the middle of the garden. Some of Shiades’ pots and plants lie scattered across the room in disarray. The large shrub has 15-feet-long whip-like tentacles with thorns. The shrub produces a strange purple-tinted gas that surrounds it. Any creature who approaches and breathes the gas must succeed on a DC 15 Constitution saving throw or take 10 (3d6) poison damage and become poisoned for 1d4 hours. On a success, the creature is immune to the effects of the gas for 24 hours. If any creature approaches within ten feet of the plant creature (shambling mound), it attacks immediately.

A successful DC 12 Intelligence (Investigation) check reveals a mound of stones near the northeast end of the wall that covers a small passage that leads to Area 6.

Many exotic plants and herbs grow in this section of the cave. The plants look fresh and watered and it appears that Shiades has been able to keep up with this section of the cave. The small water stream filters through a crack on the east wall. A successful DC 12 Intelligence (Investigation) check reveals a mound of stones by the east end of the wall that covers a small passage that leads to Area 7.

Shiades explains that the original plant monster he created by accident is here. It is larger than the one in Area 3 and it moves as if breathing. It produces a cloud of poisonous gas like the other one too. If any creature approaches within ten feet of the plant creature (shambling mound), it attacks immediately. In addition, 3 twig blights emerge from the greenery and attack the adventurers.

Shiades grows the most exotic flowers and herbs in this hidden garden. The room is covered in strange and interesting smells that mix and merge to fool the senses.

Shiades keeps flowers, spices, and scented herbs in this part of the cave. The plants in this room are the most useful for making medicine and herbal concoctions.

The unbound garden is located in a small cavernous complex inside a large rocky hill. The rainfall-fed streams inside the caves make farming and growing plants and fungi a simpler task.

Terrain. The floor of the caves consists of uneven packed soil. There are patches of a variety of grass that does not require sunlight in areas where the little streams pass. Squares around the water streams or with a large plant in it are considered difficult terrain.

Light. Some plants and fungi in the cave produce bioluminescence. The area is considered to be in dim light.

Smells and Sounds. The sound of flowing water and the occasional water drop falling from the stalactites above give the caves an ethereal feel to them. Every few minutes, the poisonous mounds make a whistling sound as they eject more gas.