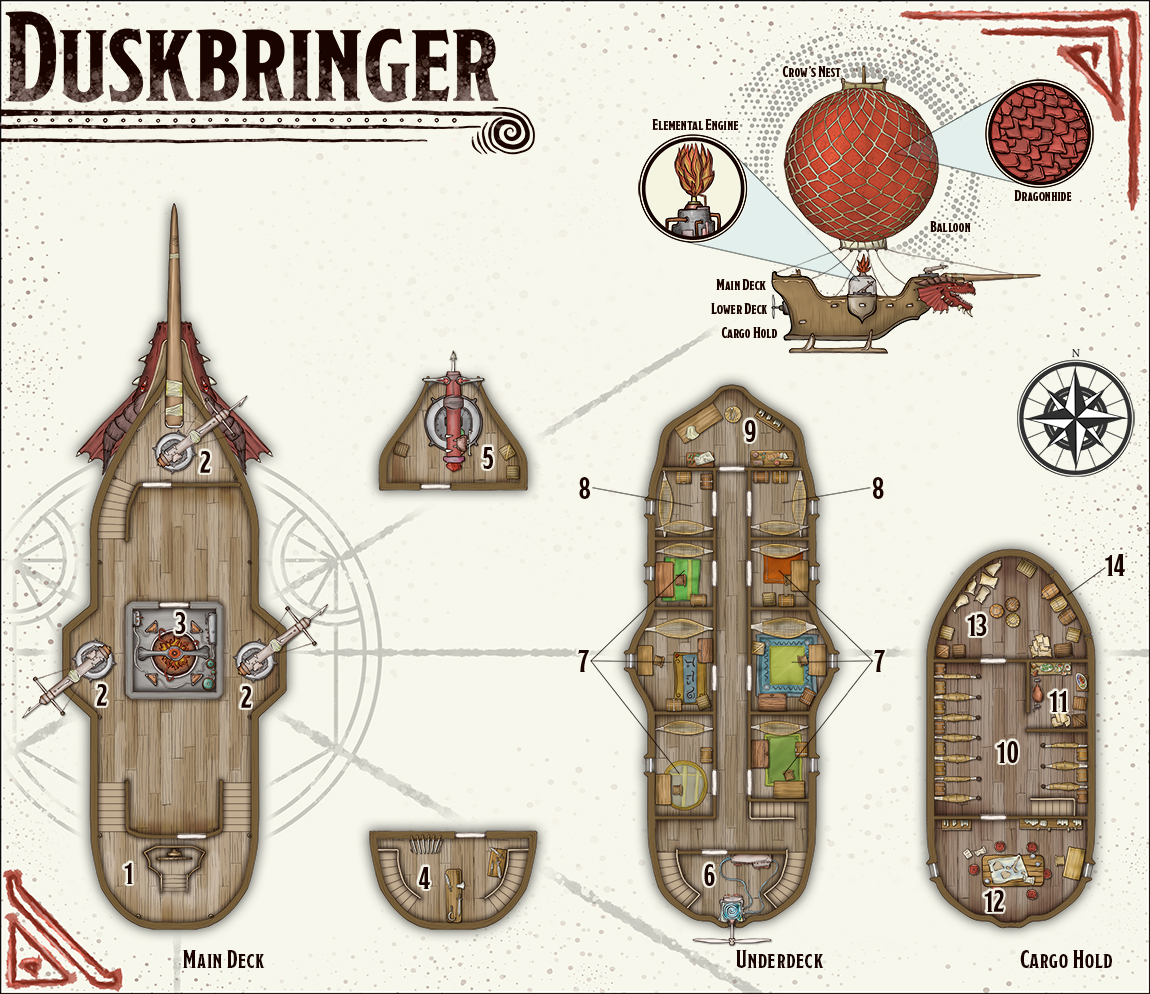 The Duskbringer’s rudder mechanism steers the vessel left or right by opening some orifices on the side of the floating balloon and propelling air in the opposite direction of the turn. This process does not allow the ship to make steep turns.

A bidirectional lever next to the rudder causes the elemental engine to erupt more fire and gain altitude when moved forward. Moving the lever backward opens two flaps at the top of the balloon to release hot air and lose altitude.

Next to the rudder is the engine order telegraph (E.O.T.) It is a round dial about twenty-inches in diameter with a knob at the center attached to one handle with an indicator pointer on the dial. The face of the dials describes several operation orders for the crew engineer in the air elemental containment unit. When the captain operates the EOT, it sends a signal to a display in the engine room (Area 6). The engineer then makes any necessary adjustments to the air elemental engine such as increasing or reducing the propeller speed.

A complicated arcane device fills most of the room and leaves just enough space for an engineer to maneuver around. The device consists of several control panels, arcane batteries, a fire elemental containment unit, and a device that draws power from the fire elemental and shoots it upward and outside of the room and into the floating balloon.

The fire elemental inside the engine is there against its will. The engineers and creators of ships such as Duskbringer insist that elementals lack the necessary self-awareness to hold a grudge against their captors. In their opinion, the elemental is not even aware of its captivity. Other people disagree with this notion.

The walls and floors of this room are covered with metal plates to reflect the heat and occasional bursts of fire from the containment unit. If the ship loses 75% of its Hit Points, it causes a malfunction. There is a 40% chance one of the containment units breaks and frees the elemental.

This chamber is directly under the rudder and is the only entrance to the underdeck. Two sets of curved stairs descend to the underdeck on each side of the room. The room is an armory. It contains five crossbows and enough melee weapons for twenty.

The firebolt cannon is a magical weapon that shoots an iron bolt that melts in the air and vaporizes anything it strikes like a ball of fire. It requires no ammo; a new bolt materializes inside the cannon after 1d3 rounds. Three crew members are required to operate this weapon.

The cannon can rotate up to 45 degrees horizontally on its fixed base. The cannon is mostly aimed by pointing the ship towards its target.

The air elemental containment unit is similar to the one in the Fire Elemental Containment Unit (Area 3) but the device is less complicated. The room lacks any kind of protective measure since air elementals are tamer than their fire homologs. A crew member is always in this location to receive operation orders from the captain and input such commands into the containment unit that powers the propeller.

A long hallway that crosses a large portion of the underdeck leads to six individual cabins. The two middle cabins are larger. The captain and the first mate sleep each in one of those cabins. The other four cabins are reserved for other ship officers and, sometimes, important passengers. Despite the difference in size, the cabins share some features. Each of them has a good-quality hammock, a desk with a chair, a carpet, and a chest. The larger cabins also have a wardrobe.

The two northernmost cabins are the same size as the individual cabins but they are more spartan in nature. Each cabin has two sets of double hammocks (4 in total) and a pair of chests. These cabins are reserved for paying passengers who cannot afford a private cabin.

The room has a smell of sterile compounds and herbal medicines. There is one wooden pad, several tables with healing components and implements, and a bookcase by the north wall with a sizable collection of medical treatises and potion recipes.

This area takes up most of the space in the cargo hold. Double sets of hammocks line the walls. There are twenty hammocks in total, each with a chest next to the wall.

This small chamber is the main storage of food in the ship and an improvised kitchen for the crew. The crew rotates kitchen duties every week. There are usually two or three crew members here preparing meals most of the time. One of the crates in the pantry is magical. It is larger inside and carries ten times more things than its size would suggest.

Only officers are allowed in this location. It is a large chamber with a wooden table in the middle. Maps, navigation implements, and other useful trinkets for planning voyages are available on the table and in one of the bookcases. The bookcases have a decent collection of maps, nautical maps, books on the functioning and maintenance of the elemental engines and the elemental containment units, and books about ship buildings and how to knit and maintain the floating balloon.

This area is used for transporting bulk cargo. Crates, barrels, boxes, chests, and sacks usually fill the room. On a few occasions, people with no gold to pay their fare have begged the captain to let them ride the ship, offering to work for him as a crew member during the trip.  Whenever this happens, the captain allows it as long as they agree to sleep in the cargo hold.

The right side of Duskbringer’s hull opens to become a cargo ramp. Objects up to ten-feet-wide fit through the opening. The door section of the cargo bay is locked in place with twenty different pressure latches on the inside of the cargo hold. It can only be opened from the inside.

Duskbringer is a flying vessel that employs two elemental engines and one dragonhide balloon. The front end of the hull depicts a dragon head with a cannon inside the mouth.

Terrain. Well-waxed wooden tiles pave the floors of most areas in the ship. The only exception is the fire elemental containment unit which has metal plates on the floor. Any area partially occupied with an object or piece of furniture is considered difficult terrain.

Doors. All the doors are wooden. The doors to the cabins (Area 7) have simple locks. The rest of them only have a simple locking hatch. A successful DC 13 Dexterity (Thieves Tools) check allows a character to pick any of the locks in the cabin doors.

Chests. All chests in the cabins and crew area have simple locks. A successful DC 14 Dexterity (Thieves Tools) check allows a character to open any chest.

Light. The underdeck and the cargo hold are in complete darkness. The exceptions are some of the cabins and the war room which have small windows. The crew moves around with the use of oil lanterns.