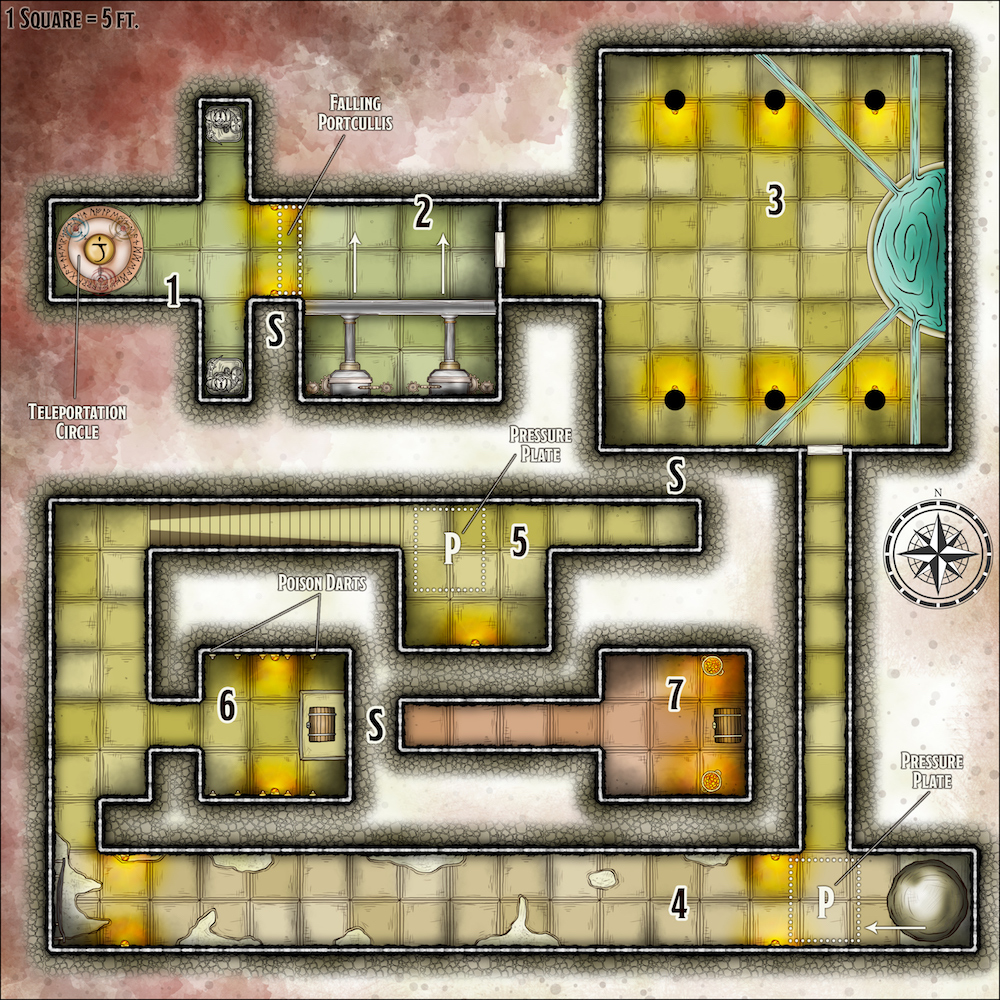 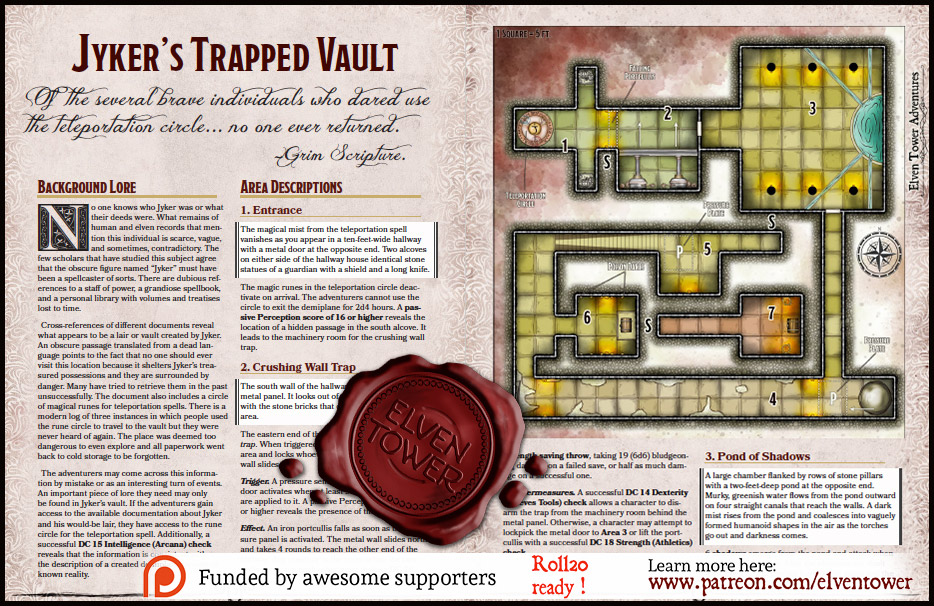 No one knows who Jyker was or what his deeds were. What remains of human and elven records that mention this individual is scarce, vague, and sometimes, contradictory. The few scholars that have studied this subject agree that the obscure figure named “Jyker” must have been a spellcaster of sorts. There are dubious references to a staff of power, a grandiose spellbook, and a personal library with volumes and treatises lost to time.

Cross-references of different documents reveal what appears to be a lair or vault created by Jyker. An obscure passage translated from a dead language points to the fact that no one should ever visit this location because it shelters Jyker’s treasured possessions and they are surrounded by danger. Many have tried to retrieve them in the past unsuccessfully. The document also includes a circle of magical runes for teleportation spells. There is a modern log of three instances in which people used the rune circle to travel to the vault but they were never heard of again. The place was deemed too dangerous to even explore and all paperwork went back to cold storage to be forgotten.

The adventurers may come across this information by mistake or as an interesting turn of events. An important piece of lore they need may only be found in Jyker’s vault. If the adventurers gain access to the available documentation about Jyker and his would-be lair, they have access to the rune circle for the teleportation spell. Additionally, a successful DC 15 Intelligence (Arcana) check reveals that the information is consistent with the description of a created demiplane outside of known reality.

The magical mist from the teleportation spell vanishes as you appear in a ten-feet-wide hallway with a metal door at the opposite end. Two alcoves on either side of the hallway house identical stone statues of a guardian with a shield and a long knife.

The magic runes in the teleportation circle deactivate on arrival. The adventurers cannot use the circle to exit the demiplane for 2d4 hours. A passive Perception score of 16 or higher reveals the location of a hidden passage in the south alcove. It leads to the machinery room for the crushing wall trap.

The south wall of the hallway appears to be a large metal panel. It looks out of place when compared with the stone bricks that conform the rest of the area.

The eastern end of the hallway is a crushing wall trap. When triggered, a falling portcullis divides the area and locks whoever is inside while the metal wall slides north.

Trigger. A pressure-sensitive panel next to the metal door activates when at least 50 pounds of weight is applied to it. A passive Perception score of 18 or higher reveals the presence of the panel.

Effect. An iron portcullis falls as soon as the pressure panel is activated. The metal wall slides north and takes 4 rounds to reach the other end of the hallway. Any creature in the room when the two walls approach each other must make a DC 16 Strength saving throw, taking 19 (6d6) bludgeoning damage on a failed save, or half as much damage on a successful one.

Countermeasures. A successful DC 14 Dexterity (Thieves Tools) check allows a character to disarm the trap from the machinery room behind the metal panel. Otherwise, a character may attempt to lockpick the metal door to Area 3 or lift the portcullis with a successful DC 18 Strength (Athletics) check.

A large chamber flanked by rows of stone pillars with a two-feet-deep pond at the opposite end. Murky, greenish water flows from the pond outward on four straight canals that reach the walls. A dark mist rises from the pond and coalesces into vaguely formed humanoid shapes in the air as the torches go out and darkness comes.

6 shadows emerge from the pond and attack when the torches’ fire dies. After the shadows are dealt with, the magical torches burn bright again and the door on the south wall opens. A passive Perception score of 16 or higher reveals the location of a hidden passage by the south wall.

The narrow hallway intersects a wider slanted hallway that extends more than seventy feet to the west. The hallway is slanted downwards at a 35-degrees angle. A large irregular boulder by the eastern end of the passage looms menacingly. Nothing seems to hold it in place.

The entire extension of the hall is a rolling boulder trap. When triggered, the large rock is set loose and it rolls down the slanted hallway until it reaches the westernmost wall. It crushes anything in its path.

Trigger. A pressure-sensitive panel in front of the boulder (see map) activates when at least 50 pounds of weight is applied to it. A passive Perception score of 18 or higher reveals the presence of the panel.

Effect. The magical force that keeps the rock in place disappears and it starts moving down the hallway at increasing speed. Any creature in the hallway must make a successful DC 16 Dexterity saving throw or take 16 (5d6) bludgeoning damage.

Before you, a 15 by 15 feet chamber with no furnishings or decorations stands apart from the rest of the dungeon. A lone magical torch is the only light source here. A long flight of stairs descends into the darkness below.

There is nothing of interest in this room. A spiked pit trap awaits in front of the stairs. When triggered, one or more creatures may fall to their deaths in the spikes below.

Trigger. A pressure-sensitive panel in front of the stairs (see map) activates when at least 50 pounds of weight are applied to it. A passive Perception score of 18 or higher reveals the presence of the panel.

Effect. When triggered, a rectangular-sized section of the floor gives in and opens to a forty-feet-deep spiked pit. Any creature in the area must make a successful DC 16 Dexterity saving throw or fall to the bottom of the pit and take 17 (4d8) piercing damage.

The light from two flickering torches flanks a single wooden chest at the end of the room. The wooden chest is closed but unlocked. A strange mural behind the chest depicts an eldritch scene of gods giving objects of power to mortals. The strange implications of such an image elude explanation.

The room has a poison dart trap. The north and south walls feature offset adornments which shoot darts that target any creature within the room.

Trigger. Lifting the wooden chest lid pulls a string that triggers the trap. A successful DC 16 Intelligence (Investigation) check reveals the presence of the trigger line in the chest.

Effect. When triggered, rows of poison darts fly from both walls. Any creature in the room must make a DC 14 Constitution saving throw, taking 12 (4d6) poison damage on a failed save, or half as much damage on a successful one.

Countermeasures. A successful DC 14 Dexterity (Thieves Tools) check allows a character to disarm the trigger thread line. Failure by 5 or more causes the trap to trigger.

The chest is empty except for a small scroll. It has a single phrase, printed in blood-red ink. It reads “The real treasure is the friends we made along the way”.

A passive Perception score of 15 or higher reveals the location of a hidden button at the bottom of the chest. Pushing the bottom causes a section of the east wall to slide sideways and reveal a hidden passage to the true vault.

The short passage opens up to a 15 by 15 chamber with an unremarkable wooden chest by the east wall. Two glowing braziers flank the chest and provide a warm orange flickering light.

This is the resting place of Jyker’s treasure. No one has accessed this chamber since the conception of Jyker’s demiplane. No one ever got this far. The unlocked chest reveals that its internal area is larger than it would appear from the outside. It contains several leather sacks with varied coins and precious stones. The collective value of these items is 11,000 gold coins. Jyker’s spellbook, staff (staff of the magi), and personal notes and books are in the chest too.

Jyker’s Vault is located in a 100 by 100 feet demiplane which exists outside of reality in a remote region of the Astral Plane. It can only be accessed through the teleportation circle in Area 1.

Terrain. The dungeon, in general, has a good state of conservation. The stone tiles have little erosion damage. A thick layer of grey dust covers all surfaces in the place, signaling it has been a long time since a person accessed the demiplane.

Doors. The two metal doors are shut and do not have a handle or a clear way to open them. The door in Area 2 opens automatically after the trap in that chamber resets. The door in Area 3 opens automatically upon dealing with the shadows. An adventurer can attempt to bypass the machinery that powers either door with a successful DC 18 Dexterity (Thieves Tools) check. Doors magically close or return to their original state after 1d4 days.

Traps.  The vault features several protection mechanisms designed to kill, maim, or scare off any visitors. These traps are mechanical devices imbued with magic. After functioning as intended, all traps reset to their original state after 3d8 minutes. If a trap is tampered with, disabled, or destroyed, it still returns to its original state after a longer period of 1d4 hours.