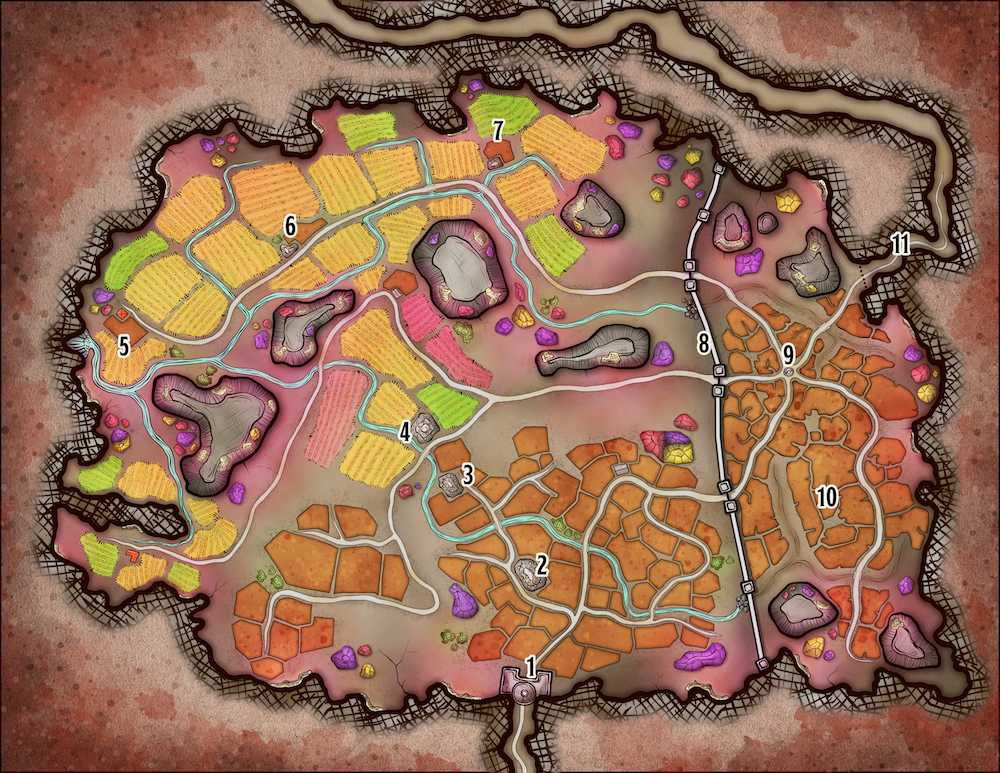 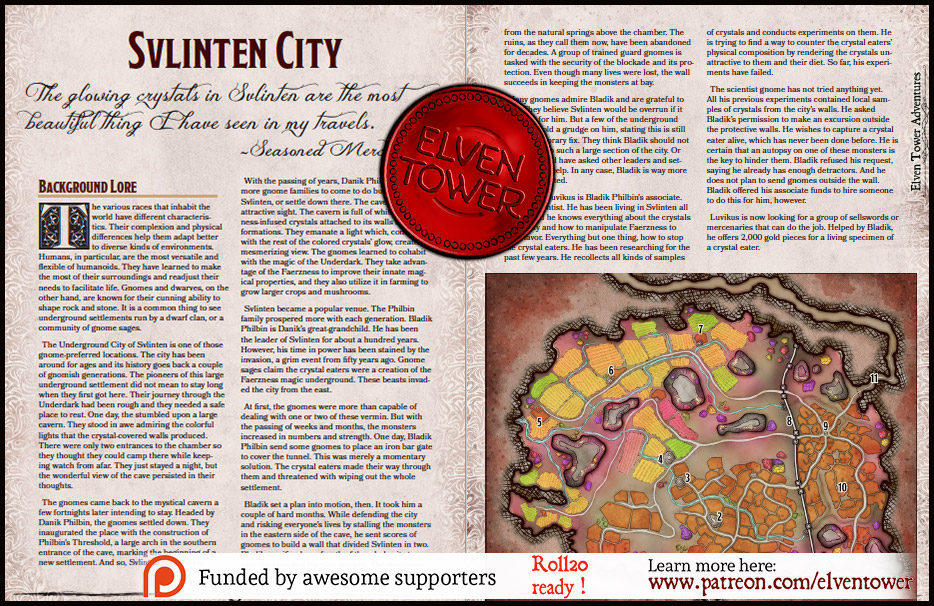 The various races that inhabit the world have different characteristics. Their complexion and physical differences help them adapt better to diverse kinds of environments. Humans, in particular, are the most versatile and flexible of humanoids. They have learned to make the most of their surroundings and readjust their needs to facilitate life. Gnomes and dwarves, on the other hand, are known for their cunning ability to shape rock and stone. It is a common thing to see underground settlements run by a dwarf clan, or a community of gnome sages.

The Underground City of Svlinten is one of those gnome-preferred locations. The city has been around for ages and its history goes back a couple of gnomish generations. The pioneers of this large underground settlement did not mean to stay long when they first got here. Their journey through the Underdark had been rough and they needed a safe place to rest. One day, the stumbled upon a large cavern. They stood in awe admiring the colorful lights that the crystal-covered walls produced. There were only two entrances to the chamber so they thought they could camp there while keeping watch from afar. They just stayed a night, but the wonderful view of the cave persisted in their thoughts.

The gnomes came back to the mystical cavern a few fortnights later intending to stay. Headed by Danik Philbin, the gnomes settled down. They inaugurated the place with the construction of Philbin’s Threshold, a large arch in the southern entrance of the cave, marking the beginning of a new settlement. And so, Svlinten came to be.

With the passing of years, Danik Philbin convinced more gnome families to come to do business in Svlinten, or settle down there. The cavern was an attractive sight. The cavern is full of white Faerzness-infused crystals attached to its walls and rock formations. They emanate a light which, combined with the rest of the colored crystals’ glow, creates a mesmerizing view. The gnomes learned to cohabit with the magic of the Underdark. They take advantage of the Faerzness to improve their innate magical properties, and they also utilize it in farming to grow larger crops and mushrooms.

Svlinten became a popular venue. The Philbin family prospered more with each generation. Bladik Philbin is Danik’s great-grandchild. He has been the leader of Svlinten for about a hundred years. However, his time in power has been stained by the invasion, a grim event from fifty years ago. Gnome sages claim the crystal eaters were a creation of the Faerzness magic underground. These beasts invaded the city from the east.

At first, the gnomes were more than capable of dealing with one or two of these vermin. But with the passing of weeks and months, the monsters increased in numbers and strength. One day, Bladik Philbin send some gnomes to place an iron bar gate to cover the tunnel. This was merely a momentary solution. The crystal eaters made their way through them and threatened with wiping out the whole settlement.

Bladik set a plan into motion, then. It took him a couple of hard months. While defending the city and risking everyone’s lives by stalling the monsters in the eastern side of the cave, he sent scores of gnomes to build a wall that divided Svlinten in two. Bladik sacrificed one-fourth of the whole city to save the rest, and his plan worked. The enormous barrier also halts the course of the water coming from the natural springs above the chamber. The ruins, as they call them now, have been abandoned for decades. A group of trained guard gnomes is tasked with the security of the blockade and its protection. Even though many lives were lost, the wall succeeds in keeping the monsters at bay.

Many gnomes admire Bladik and are grateful to him. They believe Svlinten would be overrun if it were not for him. But a few of the underground dwellers hold a grudge on him, stating this is still only a temporary fix. They think Bladik should not have given up such a large section of the city. Or that he should have asked other leaders and settlements for help. In any case, Bladik is way more loved than hated.

Professor Luvikus is Bladik Philbin’s associate. He is a scientist. He has been living in Svlinten all his life and he knows everything about the crystals in the city and how to manipulate Faerzness to their favor. Everything but one thing, how to stop the crystal eaters. He has been researching for the past few years. He recollects all kinds of samples of crystals and conducts experiments on them. He is trying to find a way to counter the crystal eaters’ physical composition by rendering the crystals unattractive to them and their diet. So far, his experiments have failed.

The scientist gnome has not tried anything yet. All his previous experiments contained local samples of crystals from the city’s walls. He asked Bladik’s permission to make an excursion outside the protective walls. He wishes to capture a crystal eater alive, which has never been done before. He is certain that an autopsy on one of these monsters is the key to hinder them. Bladik refused his request, saying he already has enough detractors. And he does not plan to send gnomes outside the wall. Bladik offered his associate funds to hire someone to do this for him, however.

Luvikus is now looking for a group of sellswords or mercenaries that can do the job. Helped by Bladik, he offers 2,000 gold pieces for a living specimen of a crystal eater.

The direct descendant of Danik Philbin always wears an elegant doublet and several pieces of jewelry. He fancies rings overall. Bladik has a round face and prominent cheeks. He has a small white goatee and he wears a pair of golden spectacles. He spends his time listening to the general complaints among Svlinten citizens.

Goal. Maintain his reputation by forbidding Luvikus from using gnomes for his task.

Instinct. He tells anecdotes of the city and his predecessor Danik over and over.

Flaw. He prioritizes what the gnomes might think of him over the importance of getting rid of the crystal eaters.

Luvikus looks like a mad scientist. He has scruffy, long white hair. He wears a very thick pair of spectacles that make his gray eyes look larger than normal. His pink nose contrasts with his pale skin. He has a high-pitched voice and gets excited when the topic of the conversation turns to science and his experiments.

Goal. Find a group of brave enough adventurers who take the job.

Instinct. Stare into the horizon with a thoughtful look when he talks about what he thinks might happen once he does his experiments with a living specimen.

Flaw. He is a man of science and discredits all talks of gods and religion coming from clerics and priests.

The large arch is the oldest structure of the city. Danik Philbin and the pioneers he arrived with built it. Since this was the very first construction, the gnomes never stopped expanding it. Now it is the size of a small castle. It contains a small square with a market. The best spice and mushroom vendors sell their wares in this privileged location. There are always members of the guard welcoming visitors and newcomers. They also keep records of who enters and leaves at all times.

Most of Svlinten residences are holes carved in rock formations. These rocky mounds are large enough to contain several chambers and allow dozens of gnomes to inhabit them. This mound belongs to Bladik Philbin. Other members of his family live here as well. Philbin’s Quarters can be seen from the entrance to the city.

This mound houses Professor Luvikus’ lab. He has a chemistry laboratory and a workshop here. This is where he spends most of his time. Luvikus has three assistants or helpers. Young gnomes, apprentices of chemistry and Faerzness’ magical properties, have their chambers here. They live to learn from Luvikus.

Farming is an important profession in the city. Many gnomes dedicate their lives to their farms. This hill houses a combination of many small storefronts. Several gnomes occupy the mounds’ spaces to exhibit their wares and crops. Local vegetables and fruits are always present.

Gnomes in Svlinten implemented a transport system riding giant beetles. Beetles enjoy ingesting the mushrooms the gnomes plant; it has become a symbiotic relationship over the years. The gnomes care for the beetles, breed them, and feed them, while the beetles allow the gnomes to ride them.  A successful DC 14 Wisdom (Animal Handling) check allows a character to befriend a beetle and ride it. Svlinten gnomes do not have to make this check.

Most of the farms in Svlinten are wheat farms. These are located closest to the underground river. The wheat grown in Svlinten is a variant species that needs less light and grows well with the Faerzress light from the crystals. The wheat is smaller and less nutritious than its surface counterpart but the gnomes offset it by planting more of it. The underground stream that feeds the farms enters the cave from a waterfall on the west wall. The gnomes have dug canals over the years to direct the flow of the water to their advantage.

Svlinten also has large plantations of exotic mushrooms. The natural magic of the place helps the gnomes harvest the rarest of mushrooms. Some of them have magical or healing properties, others are common species but larger in size. All these varieties are available in the farmer’s market. The locals consume this product but the exported mushrooms sold to human settlements on the surface bring the most profits to Svlinten by far.

The protective barrier that keeps the crystal eaters at bay is fifty-feet tall. Members of the guard are present at all times and patrol the top of the wall. They seldom have to defend the walls from the monsters. The wall has three gates but no one uses them. The gnomes built dams along the wall to stop the flow of the water from crossing to the ruined part of the city. Only the dry paths remain.

This used to be one of the most popular places in Svlinten and the former location of the Farmer’s Market. Five roads intersect in here, forming a star. A large 20-feet-tall copper statue of founder Danik Philbin overlooks the ruins.

This section of the city has been abandoned for more than four decades. Crystal eaters roam the streets and inhabit deserted buildings. Many gnomes in the city consider the ruins to be lost forever and think it is best if they are forgotten. Luvikus thinks otherwise and trusts he can find a way to deal with the monsters once and for all and recover what they lost almost half a century ago.

Hundreds of years ago, this tunnel was as an entrance to the city, although it was not as used as Philbin’s Threshold (Area 1). The iron bars that covered the entrance show signs of deep corrosion and some of them are destroyed. The tunnel is believed to be full of monsters and danger. No visitor has accessed the city chamber from this tunnel in decades.

River. The water flow comes from above the ground and like a waterfall, it never stops.

Illumination. There is no day cycle in Svlinten. The caves are in a permanent state of glow. The Faerzness-infused crystals light the cavern at all times.

Housing. All gnomes live in holes dug inside hills and rocky formations. There are no single homes per se. All gnomes are accustomed to live a little crowded.

Crystal Eaters. These monsters resemble crustaceans. Use the stats of a giant crab with shiny pincers with adamantine plating. Their diet consists of crystals, precious stones, and quartz.