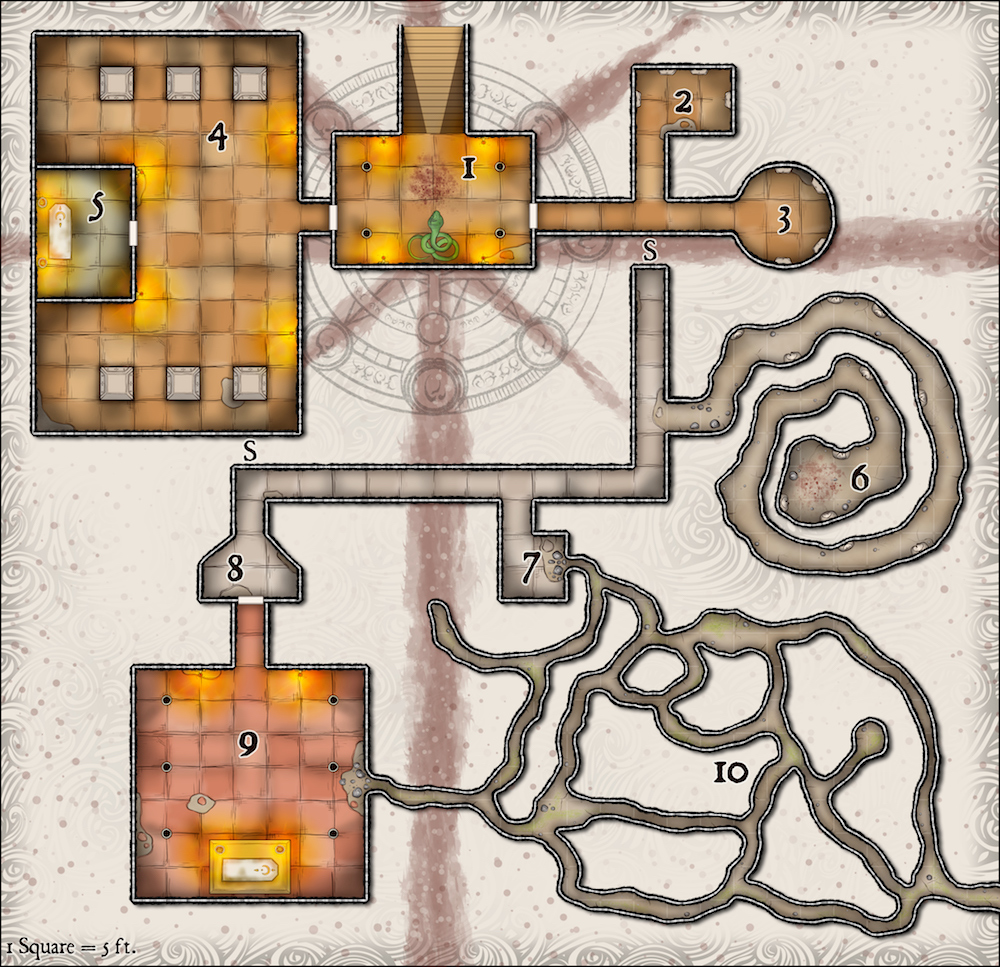 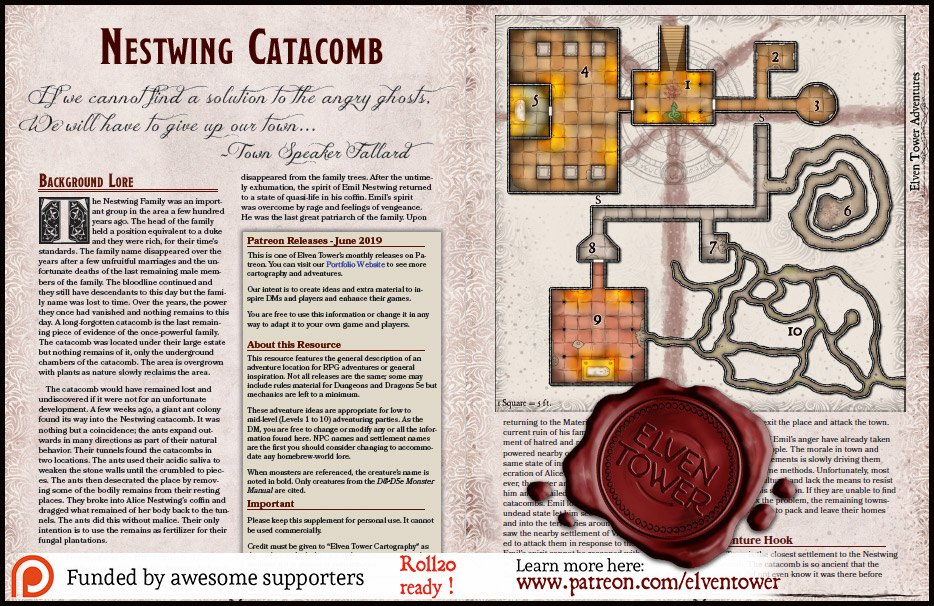 The Nestwing Family was an important group in the area a few hundred years ago. The head of the family held a position equivalent to a duke and they were rich, for their time’s standards. The family name disappeared over the years after a few unfruitful marriages and the unfortunate deaths of the last remaining male members of the family. The bloodline continued and they still have descendants to this day but the family name was lost to time. Over the years, the power they once had vanished and nothing remains to this day. A long-forgotten catacomb is the last remaining piece of evidence of the once-powerful family. The catacomb was located under their large estate but nothing remains of it, only the underground chambers of the catacomb. The area is overgrown with plants as nature slowly reclaims the area.

The catacomb would have remained lost and undiscovered if it were not for an unfortunate development. A few weeks ago, a giant ant colony found its way into the Nestwing catacomb. It was nothing but a coincidence; the ants expand outwards in many directions as part of their natural behavior. Their tunnels found the catacombs in two locations. The ants used their acidic saliva to weaken the stone walls until the crumbled to pieces. The ants then desecrated the place by removing some of the bodily remains from their resting places. They broke into Alice Nestwing’s coffin and dragged what remained of her body back to the tunnels. The ants did this without malice. Their only intention is to use the remains as fertilizer for their fungal plantations.

Alice Nestwing was the last matriarch of the family and the last to hold the family name before it disappeared from the family trees. After the untimely exhumation, the spirit of Emil Nestwing returned to a state of quasi-life in his coffin. Emil’s spirit was overcome by rage and feelings of vengeance. He was the last great patriarch of the family. Upon returning to the Material World and regarding the current ruin of his family he became an embodiment of hatred and rage. His powerful spirit empowered nearby ones and propelled them into the same state of insanity. Emil Nestwing saw the desecration of Alice’s tomb as a terrible crime. However, the anger and his poor state of mind blinded him and he failed to see the ant colony next to the catacombs. Emil looked for someone to blame. His undead state let him see through rock and ground and into the territories around the catacombs. He saw the nearby settlement of Valai Town and decided to attack them in response to the exhumation. Emil’s spirit cannot be reasoned with, his insanity is beyond comprehension. Emil cannot abandon the mausoleum but his strength can create shadow spirits that can exit the place and attack the town.

The shadows of Emil’s anger have already taken the lives of ten people. The morale in town and other nearby settlements is slowly driving them all to more extreme methods. Unfortunately, most towns are agricultural and lack the means to resist or overcome this situation. If they are unable to find someone to fix the problem, the remaining townsfolk may well have to pack and leave their homes for good.

Valai Town is the closest settlement to the Nestwing Catacomb. The catacomb is so ancient that the townsfolk did not even know it was there before the attacks began. Town Speaker Fallard sent four guards and one hunter to track down the location and solve the problem. Only two of them returned with no results. Fallard does not have much to offer but all in the area have chipped in to collect 120 gp to hire mercenaries to do the job. The Town Speaker also mentions that the mercenaries may keep any valuables found in the catacomb as an additional reward.

Four pillars support this chamber and a large rattlesnake statue guards the entrance to the catacombs. The rattlesnake is in the Nestwing’s crest. The crest is carved onto some walls of the underground complex. Stains of recent blood in front of the serpent remind the adventurers of the recent failed excursion from Valai Town.

The snake statue is a trap. Upon entering the chamber it shoots a volley of thunder from its eyes. Any creature directly in front of it must make a successful DC 15 Dexter­ity saving throw, taking 10 (3d6) lightning damage on a failed save, or half as much damage on a successful one. The trap resets itself after 10 minutes.

The chamber holds four niche towers that span the walls from floor to ceiling. Each niche has drawer-like compartments and should be large enough to hold the ashes of twenty people. The dark energy from Emil’s coffin reaches this area and materializes 3 shadows which attack any visitor.

This chamber is similar to Area 2 except that it is circular in shape. No undead spirits appear in this chamber.

This luxurious catacomb holds the remains of important patriarchs and other members of the family. Four wide pillars with niche compartments flank the walls. Each compartment has a carved inscription with the name of the person whose remains are inside. Erosion and humidity have made some inscriptions illegible. The center of the chamber features what appears to be an inner chamber, a mausoleum of sorts. The stone door does not open automatically (see sidebar). The door’s bas-relief depicts a strange pointed crown. 2 shadows and 2 ghosts of ancient patriarchs come out of the pillars and attack any visitor who approaches the mausoleum’s door.

Emil’s spirit is trapped with ancient magic to the chamber. Opening the door releases the dangerous spirit. Emil (wraith) attacks immediately and condemns the visitors as he attacks. The name of Alice and the crime of her tomb’s desecration are often part of his admonishments. Unfortunately, the spirit cannot be reasoned with and it never hesitates in its attacks. Destroying Emil’s evil manifestation is only a temporary measure, the wraith reforms in 24 hours in the same state. Reclosing the door does not trap the spirit again. Once it is opened Emil is free to roam the catacombs and the nearby lands.

Only by retrieving Alice’s remains from the ant tunnels and returning them to her coffin does Emil regains his mind. If the adventurers visit this area after returning her remains, the ghostly apparition of the former family leader thanks them for their kindness and offers them the material rewards in his coffin as a token of gratitude. This treasure is not described in this module and it is up to the DM’s discretion.

After understanding that it was only the ants, Emil uses his power to exile the ants from the area. The ants move away over a period of two weeks and abandon the area forever.

The south section of the catacombs can only be accessed through two different secret entrances. A successful DC 14 Intelligence (Investigation) check reveals the presence of the fake walls and the switches to open them. This spiral catacomb holds the remains of some of the newest members of the family. The Nestwings had a fast collapse into oblivion and with empty coffers, there were not many options to remodel the catacomb or enlarge it in the same style. At the end of the tunnel, there are three niche towers were two shadows attack from behind to prevent anyone from leaving the area.

Nothing remains of the niches in this area. The ants brought down all niches and repurposed all they could find. The entrance tunnel to the tunnels reeks of their characteristic formic acid saliva.

The door to Alice Nestwing’s Tomb opens automatically upon approaching but it also activates a set of explosive runes on the floor directly in front of it. A successful DC 14 Wisdom (Perception) check reveals the presence of the runes on the floor before the person steps on them and triggers the trap. A DC 18 Intelligence (Arcana) check or a detect magic reveals the dangerous nature of the runes. If a creature steps on the runes they trigger an explosion in a 10-foot-radius from the door. All creatures in the area must make a successful DC 16 Dexter­ity saving throw, taking 12 (4d6) fire damage on a failed save, or half as much damage on a successful one. The trap resets after an hour. A dispel magic spell disables the runes for 1d4 hours.

A large chamber with an ornate coffin by the south wall. The coffin shows signs of acidic erosion and it has crumbled in several parts. There is nothing inside the coffin. A successful DC 10 Wisdom (Perception) check reveals acid stains and insect tracks to and from the crumbled wall section on the east side of the chamber. The tunnel is similar in nature to the one in Area 7. Approaching the tunnel causes a large group of giant ants (swarm of insects) to attack. Each ant is half a feet long.

Moving through the narrow tunnels is a challenge in itself. Some of the slightly wider sections appear to be some kind of fungal farm that the ants tend too. The acrid smell is so strong in the tunnels that any creature must make a suc­cessful DC 12 Constitution saving throw to avoid becoming poisoned. Any creature who makes the save is immune to this effect for 24 hours.

The place is crawling with giant ants, though most of them run away or ignore the visitors. It is only the soldier ants that retaliate against the adventurers. The remains of Alice Nestwing are in one of the farms (not specified). To reach the place, the adventurers must fight off 1d4 swarms of insects in two different encounters.

These are the general features of the Nestwing Catacomb. It is located well outside of a small town in an overgrown area near a forest.

Terrain. The stone tiles that cover most of the catacomb are old and dusty but in good condition. Some sections appear to have chipped off due to seismic activity a long time ago. Signs of cracks on the walls are visible on close inspection too. Areas 6 and 10 feature rough uneven stone floors. All squares with a rock or object in them or hallways narrower than 5 ft. are considered difficult terrain for tactical movement.

Doors. The catacomb features sturdy stone doors with inlaid silver decorations and adornments. The doors are magical and slide sideways when a living creature approaches within 10 feet of them. Only the door to the mausoleum (Area 5) does not open automatically. A dispel magic spell or equivalent disables the door for 5 minutes. During this time, a person can push it sideways manually with a successful DC 18 Strength (Athletics) check.

Light. Some areas (see map) feature magical torches or braziers that provide bright light. All of them are magical and equivalent to the continual flame spell. All other areas are in complete darkness.