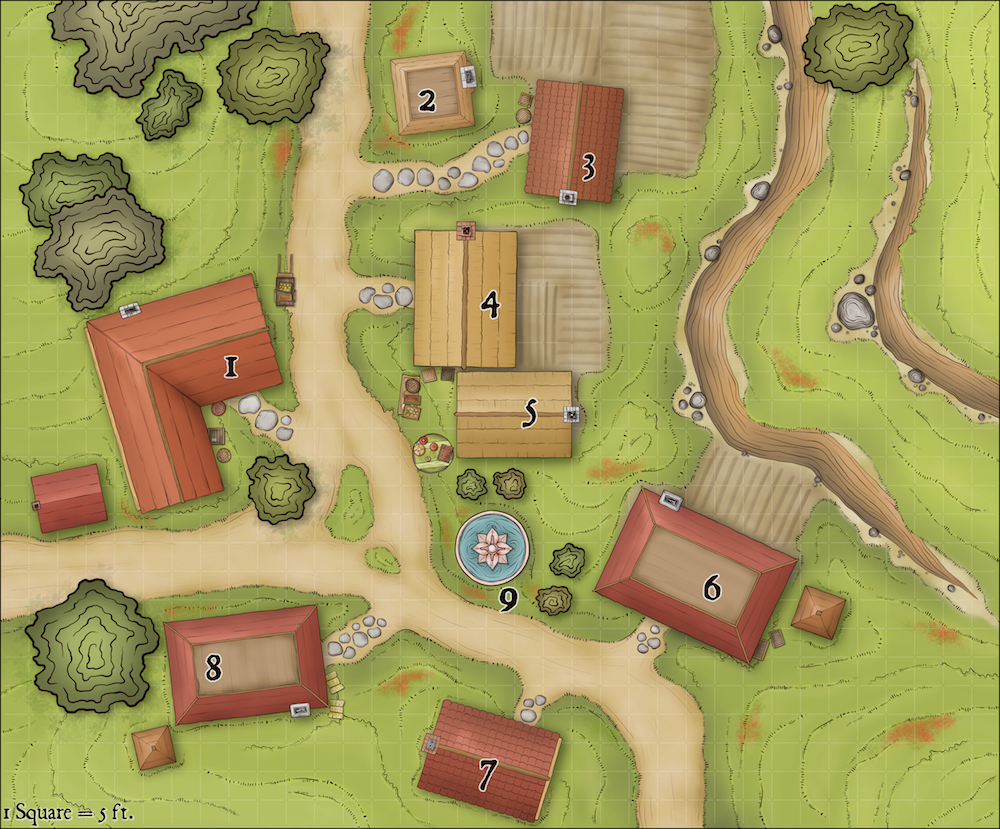 The place where two major merchant roads intersect is often the birthplace of a small settlement or sometimes even a town. Crossroads hamlets appear organically in an unplanned way and grow at the pace of travelers and merchant who frequent that path. The more commerce and travelers the larger the settlement as it becomes a staple in the middle of larger cities and it becomes more desirable to live there.

The small hamlet known as Red Flower Crossroad was born when a group of three travelers had to camp out for a month in the wild because one of them had an injured leg. The merchant refused to return to the city until he was well enough to walk on his own. He claimed that going home to the wife in such condition was like admitting a defeat. While the man’s pride has been put in question many times, that is what he chose to do. The semi-permanent encampment next to the crossroad attracted other travelers as they chose to spend the night in the company of others rather than continue further and sleep alone in the middle of the country. A guy named Barret, an ale merchant, spent a few nights at the crossroads selling beverages to whoever stayed the night and made good business out of it. So good that half his shipment was gone when he decided to part.

Barret came back a month later and found that, while the injured merchant was gone, other travelers picked up on the custom and there was always a small group of travelers dining and drinking together by the crossroads. Barret decided to take the risk and opened shop a few yards from the road and named the place “Red Flower Tavern”. The name alludes to the pretty small red flower bushes that are so frequent near the place. Barret’s endeavor was a success and his business flourished. With time, other people found a way to make themselves useful and decided to settle in the early days of the hamlet in hopes to profit later on.

Today, one generation later, the small hamlet is growing and it may well turn into a small town down the line. There are nine buildings in the area, two outhouses, and a permanent population of 41 people.

Barret died eight years ago but his two sons, Adril and Gomo, own the tavern. They work together well but the usual brotherly rivalry becomes an issue from time to time. The eldest is Adril but, since they were born a year apart, it is not as if he commands authority over his sibling. Gomo is a good lad but resents his older brother for inheriting the tavern. Both of them live in the tavern building which also has two spare rooms. They rent the rooms to travelers.

Despite their father being the founder, neither of them has a knack for leadership. After Barret died, the de facto leader of Red Flower Crossroad is Madam Eiranna.

Hubbard is a large sturdy man who lives here with his wife and his six children. Hubbard knows carpentry, masonry, and is a thatcher. While not alone, he has been involved in the construction of most structures in town. His abilities are valued and he makes himself useful wherever he can. His largest motivation is to provide his children with a good opportunity in the growing settlement. He already takes his two eldest with him and teaches them how to use their hands.

Filo is a half-elf merchant who was the first to follow Barret’s example after he opened the tavern. Filo is still around thanks to the Fey blood in his veins but he is already an old man. He opened a general shop that sells just about anything but the price is marked up for travelers. Locals get regular prices. The store depends on travelers and merchant routes to make ends meet.

Sir Talus is a mid-aged war hero who was allowed to retire early as a boon for his war deeds. The knight was aware of the growing settlement and came here with his wife and two children to settle in what he hopes will be downtown when his grandchildren grow up. He paid for his land to some lord and is the only person in town who legally owns their parcel and has a deed for the house. He and his family live off of the stipend he receives from the crown. Three times a week, Sir Talus trains his young boy and two other neighbor boys with training swords. He tells them that there will come a time when they will be the sword that stands between evil and their families.

Yuna is a mid-aged lady who lives with her three sons. The young boys work on the farms while she runs a barter shop in her house front. She has many things to offer and the good things come and go with the travelers. She claims to have traded two items with magical properties in the past. Yuna came here with her husband but he died ten years ago in a hunting accident.

Madam Eiranna’s parents moved to the crossroad twenty years ago and passed away recently. Madam Eiranna was already an adult when they moved to the country. She is a strong-willed assertive woman with leadership skills. Her tone of voice is never aggressive or insulting but she gets things done, and people do as she says. She is the de facto leader in town and no one questions her self-given authority. Her main goal is to grow the town’s population and attract more settlers. If she can get enough people to move here, the local lord in the city is bound to appoint her major and her family will receive a stipend for ruling over the town. So long as she manages to collect the tithes for the crown.

Vanneri is a large bearded man who lives with his wife and four children. Vanneri is an accomplished, hunter and fisherman. He ventures into the closest forest every morning with his eldest son and a friend to hunt game. When they hunt large game like boars or deer, they bring it back and organize a large dinner in the tavern and offer the food to every local for free. Vanneri is well appreciated by all in town for this gesture. Adril and Gomo only charge travelers and merchants for these meals.

The newest house in town is the home of Avery Goldtooth and his family. Avery is an unimportant member of a powerful family who owns several gold and silver mines. Avery is the eleventh sibling, however, and he is bound to inherit nothing but his last name. With the generous stipend the family provides, Avery moved to the country to try his luck. According to local and family rules, if he finds a silver or gold vein and pays the appropriate tithe to the crown and family, all other riches are his to keep. Avery and two mining prospectors travel every day to a location where there might be a silver vein. If he is successful in opening a mining operation in Red Flower Crossroads, he may well change the fate of the town as he will attract plenty of settlers to form his labor force.

A simple but beautiful stone fountain marks the place where travelers used to gather around the fire to spend the night telling their stories and sharing their food and drinks. The bottom of the pond shines brightly from the coins travelers toss when they leave the hamlet. The locals created this tradition of asking the god of travelers for their blessing by tossing a silver coin. Madam Eiranna collects all coins once a month.

These are the general features of Red Flower Crossroad. It is located at a T intersection in between three larger settlements. The closest is a week away.

Terrain. Rolling hills, small plantations, and shallow cliffs surround the hamlet. The roads are not paved but they have frequent travelers; they are flat enough for carts and carriages.

Doors. All nine buildings feature wooden walls, doors, and simple locks. The locks are not used often, though. Everyone knows each other and most doors are unlocked at all times. People only take precautions when a particularly troublesome group or individual is staying the night.

Light. There are no public lights outside of any houses. Lighting conditions are dependent on the time of the day and the weather.

Smells and Sounds. The sweet fragrant smell of the red flowers in the area is something the travelers mention often as they are used to the dull and somewhat stinky smell of larger settlements. The smell of manure is also common. The settlement does not have stables; horses are tied in the open under the shade of large trees.