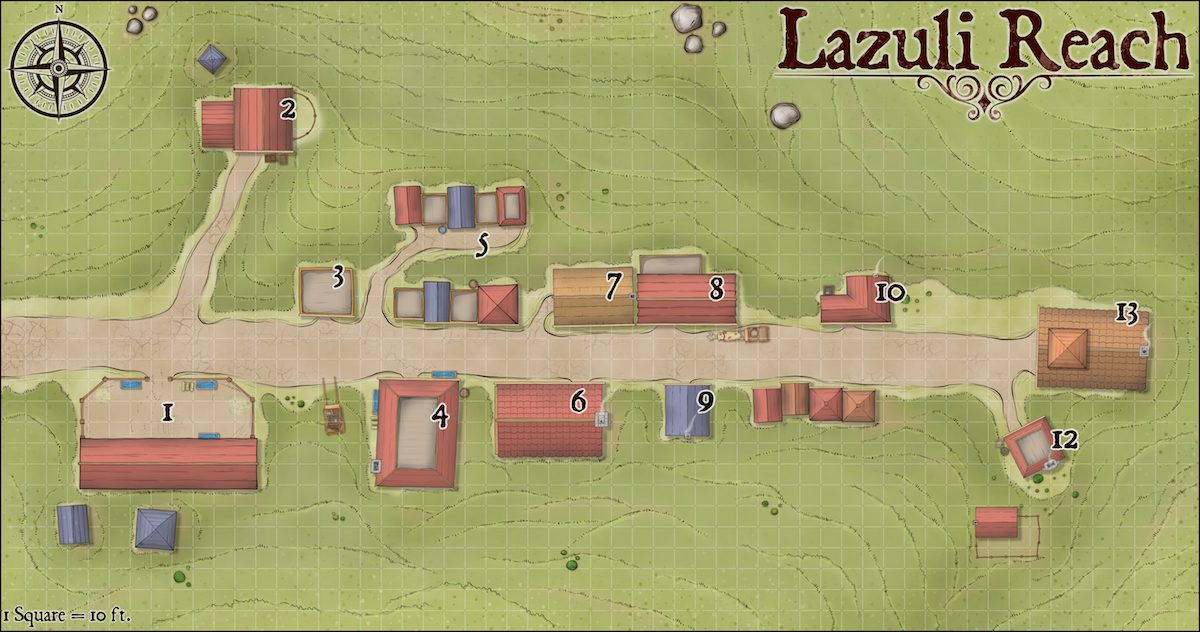 Lazuli Reach is a small hamlet with approximately ninety permanent residents. However, a transient population of ten to twenty travelers is common at any given day. Lazuli Reach is located a quarter of a mile from a large merchant road. It branches off of it and leads to the Townspeaker’s house.

The origin of the hamlet goes back one generation when an underground vein of iron and silver was found near the merchant road. The Red Fang Trading Union saw the opportunity to profit from unquenched reserves and hired people and prospectors to move close to the place to work on a mine. They offered a fair wage and they did not lack for volunteers. People moved a few minutes from the just begun excavation site and started a new life away from the stinky cities to the south. The people who settled the area were all from rural backgrounds and lived grey lives in the city. They saw working for the Red Fang Trading Union as an opportunity to start over in a small town and grow with it as it became more important.

The location of the new mining settlement was close enough to the main road that it became a convenient stop for travelers and merchants as they made their way to and from the largest cities. It was only a few minutes off the road but Lazuli Reach had stables and a well-furnished inn to rest. Of course, all these amenities came with time. Only travelers had a chance to use them because the locals were in a different position.

The Red Fang Trading Union is a faceless organization whose only priority is to generate profit. They cared not for the settlers, nor their position or wellbeing. The Union offered to provide the funds needed to build houses and offered the new settlers what appeared to be reasonable debt contracts. The townsfolk would pay for the houses over their lifetimes and would eventually become sole proprietors of their building and the land lot. It was a grind, for sure, but rural people had seldom any other option. If things turned out as they should then their children would be better off and the next generation would reap the benefits.

But it did not happen that way. The Union had tricked the settlers into signing an unfair contract of debt and labor. The economic conditions and the nature of the interests over the debt were so complicated for the average person that they just signed them and trusted the good looking Union representative. The interests were merciless and the debt was ultimately inherited to the next generation. Now the children and some grandchildren of the first settlers continue to work at the mines and struggle to make the payments their parents left them with. While the scenario is unsettling and unfair, the Union representatives take great care in explaining the townsfolk how they can help them surpass the current difficulties. They always have a payment plan or a labor plan, and they are sympathetic and understanding. But that is nothing but a mask. The only thing the Union cares about is keeping the townsfolk ignorant and compliant with help and promises. As long as folks believe it is possible to pay back what is owed they will keep working. They pay and pay but the last payment keeps evading them. Some of the people in the third generation are starting to realize that they were born into an unpayable scam. No one shares such ideas because it is considered a taboo of sorts. But many folks are starting to grow unhappy with the state of affairs. They might just need a push from an outside source to revolt openly.

The settlement owes its name to the nature of the mining operation that fuels the town. The area around the mine turned out to be a place rich with quartz, salt, and other crystalline formations and stones. The most common in the area is a semi-precious stone called lapis lazuli. This stone is sea blue most of the time, looks beautiful in jewelry, and it is easy to work with. Most people work the mines but the ones who used to stay home took upon themselves to work with the stones and create elaborate jewelry and decorations. Word of mouth has spread the news over the years and now it is not uncommon for travelers to ask about the lapis lazuli objects of art. The Red Fang Union hates this side-business because it may become a tool with which the locals will be able to pay back their debts. They have tried to crack down on the activity with several ridiculous excuses but they have not succeeded yet.

1. Stables. The building features a long row of horse stalls with capacity for 15 horses or similarly sized animals.

2. Tannery. Don Holgard owns the tannery and employs a few young boys for his operation. Don arrived at Lazuli Reach on his own and is not subject to the scammy operations of the Red Fang Union.

3. R.F.U General Store. The Union controls the lives of most people. They control their job and how they spend the money. This is the only shop in town and the Union doctors the prices to keep people in debt.

4. Golden Crown Inn. The inn belongs to the Union and is off-limits to the locals. The rooms are nice and cozy and the cost is affordable. Most travelers stay in this establishment for the night when they visit Lazuli Reach.

5. Small Houses. The small townhouses are all property of the Union and the tenants have struggled to pay them for two generations so far. The average household has 4 to 5 members.

6. Giorgio’s Tavern. The barkeeper is a middle-aged guy named Kerko. There is no one of the name Giorgio and that is something all travelers ask about. Kerko is the son of one of the original settlers and still owes money to the Union but he is charismatic and managed to escape from the mining work and works the tavern. His life is easier than it is to others but this does not humble Kerko. He is an arrogant man who loves to show off his position to others in town.

7. Blacksmith Shop. A humble operation with a bare forge. Just enough to service horseshoes and the most common metal pieces in carts and wagons.

8. Mining Tool Storage. The tools are left at the mine most of the time but this is the place where iron, silver, and some lapis lazuli are kept before the Union wagons come to retrieve them and get them to the large cities. The delivery wagon comes about twice a month.

9. Constable’s Building. The closest city-appointed Constable Robert Ussai as the figure in charge of the mining settlement. In practice, he is just a puppet of the town speaker and lacks any sort of power. He is a selfish man who serves no one but himself and cares not for the abuses in town. His house features a small cell that has been used once or twice.

10. Jaela’s Home. Jaela is a cook and baker who moved here with her three sons almost ten years ago. She owns her house and is not subject to the predatory practices of the Union. She makes a decent living selling her food and pastries to travelers in Giorgio’s Tavern. She has tried a few times to talk people into standing up to the Union but no one wants to do that.

11. Sir Jifferd’s House. Sir Jifferd is an old man who used to be a knight back in his prime. The senior noble is in Lazuli Reach as a representative of the crown and is supposed to oversee that tithes and taxes are collected appropriately every three months. He is old and frail and the Union runs by him a complicated report every tax period. The report is so complex that Sir Jifferd usually signs it without reading it. An accountant can quickly realize that the Union is paying only a fraction of what they should.

12. Townspeaker’s House. The real person in charge of Lazuli Reach is Tonwspeaker Vadianna. She is a high-level officer in the Red Fang Union. She is a ruthless, hateful, and overall terrible person. She has been in control of Lazuli Reach for six years but her predecessors were not much better.

These are the general features of Lazuli Reach, a small one-street settlement that branches from a well-traveled merchant road.

Terrain. The immediate area around Lazuli Reach is covered in thick grass patches and rolling hills. Two forests flank the settlement, the closest one is one hour away.

Doors. The hamlet is small enough that everyone knows each other and there is little need for security or privacy. Still, all doors have simple locks but they remain unlocked most of the time.

Light. Lazuli Reach is located near the bottom section of a large valley but this does not impede natural light from reaching it. Morning mist is a problem during the first hours every day. Otherwise, lighting conditions are dependent on the time of day and weather.

Smells and Sounds. The smell of greenery and verdant life is prevalent in Lazuli Reach. Once or twice per week, the disgusting smells from the tannery (Area 2) permeate the town for a few hours.