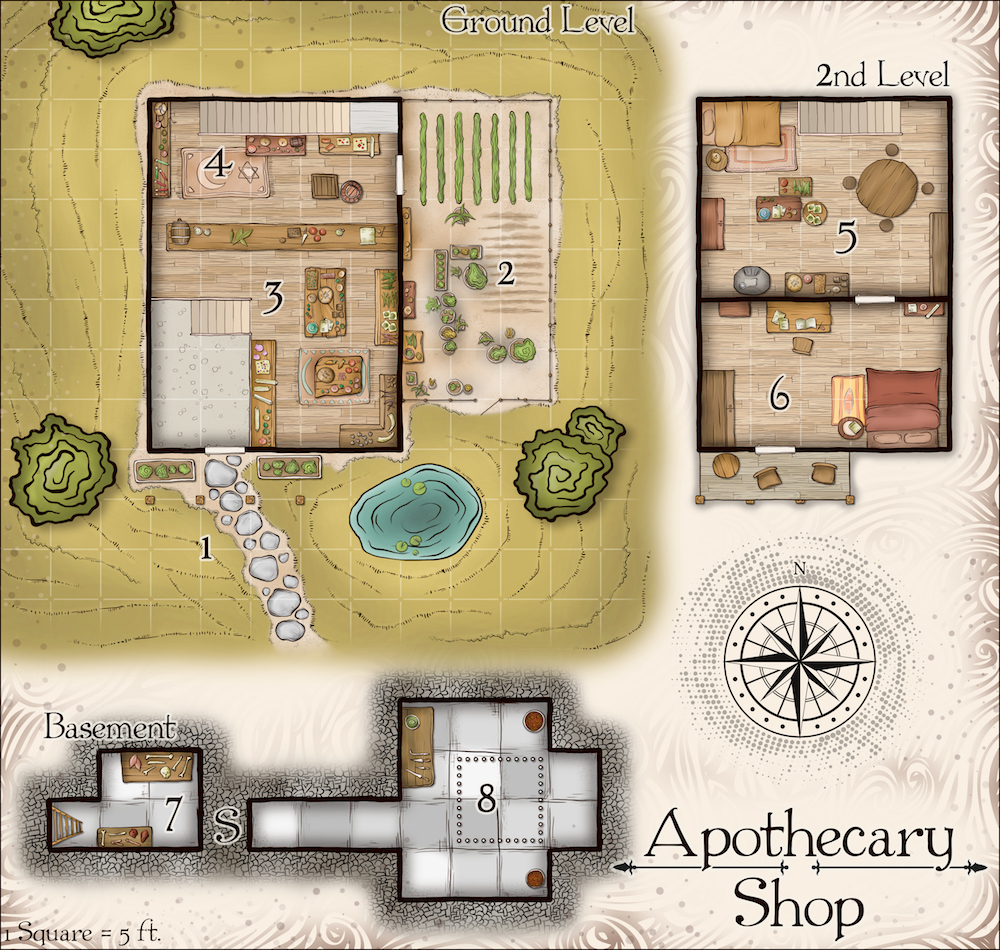 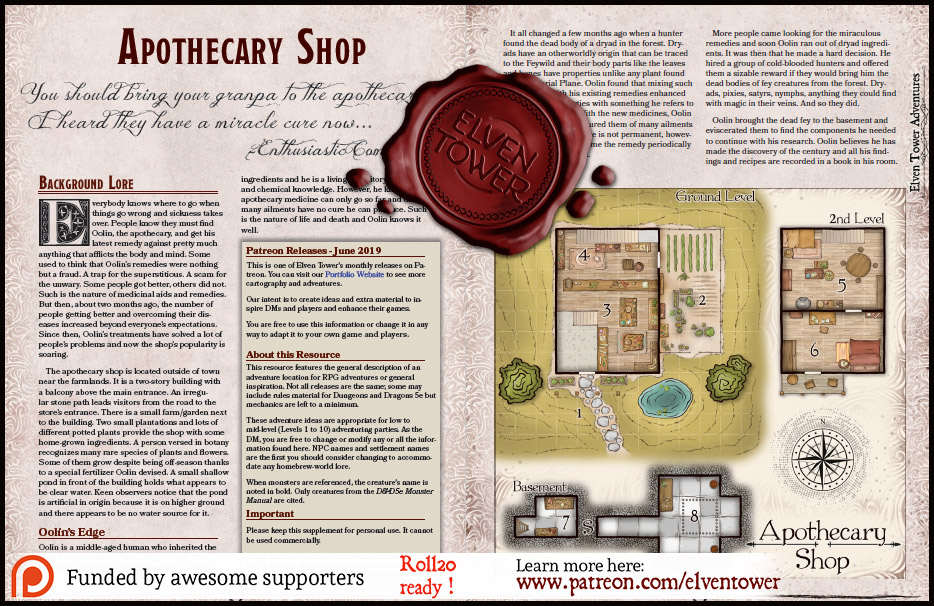 Everybody knows where to go when things go wrong and sickness takes over. People know they must find Oolin, the apothecary, and get his latest remedy against pretty much anything that afflicts the body and mind. Some used to think that Oolin’s remedies were nothing but a fraud. A trap for the superstitious. A scam for the unwary. Some people got better, others did not. Such is the nature of medicinal aids and remedies. But then, about two months ago, the number of people getting better and overcoming their diseases increased beyond everyone’s expectations. Since then, Oolin’s treatments have solved a lot of people’s problems and now the shop’s popularity is soaring.

The apothecary shop is located outside of town near the farmlands. It is a two-story building with a balcony above the main entrance. An irregular stone path leads visitors from the road to the store’s entrance. There is a small farm/garden next to the building. Two small plantations and lots of different potted plants provide the shop with some home-grown ingredients. A person versed in botany recognizes many rare species of plants and flowers. Some of them grow despite being off-season thanks to a special fertilizer Oolin devised. A small shallow pond in front of the building holds what appears to be clear water. Keen observers notice that the pond is artificial in origin because it is on higher ground and there appears to be no water source for it.

Oolin is a middle-aged human who inherited the shop from his father almost 15 years ago. He knows the properties, real or imagined, of most ingredients and he is a living repository of botanical and chemical knowledge. However, he knows that apothecary medicine can only go so far and that many ailments have no cure he can produce. Such is the nature of life and death and Oolin knows it well.

It all changed a few months ago when a hunter found the dead body of a dryad in the forest. Dryads have an otherworldly origin that can be traced to the Feywild and their body parts like the leaves and bones have properties unlike any plant found in the Material Plane. Oolin found that mixing such components with his existing remedies enhanced their healing properties with something he refers to as Botanical Magic. With the new medicines, Oolin treated the locals and cured them of many ailments and disabilities. The cure is not permanent, however. The sick must consume the remedy periodically for the magic to persist.

More people came looking for the miraculous remedies and soon Oolin ran out of dryad ingredients. It was then that he made a hard decision. He hired a group of cold-blooded hunters and offered them a sizable reward if they would bring him the dead bodies of fey creatures from the forest. Dryads, pixies, satyrs, nymphs, anything they could find with magic in their veins. And so they did.

Oolin brought the dead fey to the basement and eviscerated them to find the components he needed to continue with his research. Oolin believes he has made the discovery of the century and all his findings and recipes are recorded in a book in his room.

Oolin made a mistake, though. A hunter brought back a living dryad the other day and Oolin decided to keep her alive in the basement cage. The dryad has tried to beg for their life but the language barrier prevents Oolin from understanding what they say. Not that he would comply anyway. But Oolin does not know quite as much as he claims of fey creatures. The dryad is still in contact with their father tree and is calling for help from the remaining fey creatures in the forest. It is only a matter of days until another fey creature comes across their father tree and hears her call.

When that happens, even the fey will find it hard to push into human territory to free their own. They are likely to request help from trustworthy individuals who know the land and can force the apothecary to release his prisoner. Confronting Oolin is not a complicated matter. He is a cowardly man at heart and will not resist forceful attempts. However, Oolin explains that releasing the dryad and impeding his research will prevent hundreds of people from consuming the remedy again and they will soon succumb to their sicknesses and disabilities again. The adventurers may think that this is just a bluff from Oolin but nothing is farthest from the truth. Without the remedy, people bounce back to a state worse than before getting treatment. Scores of them do not survive this process and die in terrible conditions.

The facade of the building shows signs of wear and disrepair. It is an old house passed down three generations. The front door is made of hard-grain oak and features a bas-relief of a fairy flying over a tulip field. Two rectangular pots flank the entrance. Varied strains of cinnamon and tulips grow here and the smell is fine and delicate.

The garden is a marvel of nature that combines many plants and herbs with medicinal qualities. The uppermost plantation grows large-sized tomatoes.

The main room inside the establishment is packed with tables, bookcases, and shelves. All of them stacked with plenty of spell components, medicinal herbs, natural ingredients, and animal parts such as shells and bones. Affluent crowds frequent the store often these days and getting Oolin or his assistant to notice you is not easy.

Oolin and his assistant, Trino, are often behind the counter providing counsel on what to buy depending on what afflicts the customers. The special ointments prepared with fey parts are reserved for people with incurable conditions as part of Oolin’s research. The prices in the store have risen steadily over the past two months as they become ever more popular. The stairs behind the counter lead to the small apartment on the second story.

The carpet on the floor hides the location of the trapdoor to the basement. No one, except Oolin and Trino, knows about it. Oolin has the only key for the basement.

Trino sleeps on the bed by the north wall. Trino is grateful to Oolin for accepting him to apprentice by his side. Trino is an accomplished apothecary already and can treat most normal diseases. Trino is aware of Oolin’s current experiments with fey parts. He does not like where the remedies come from but he accepts that the benefits far outweigh the price. The living dryad in the basement is a problem for him, however. His moral compass is at stakes now and he feels responsible and guilty of what the are doing to it.

This section of the house is always locked and only Oolin is allowed here. The documents on his desk are proof of all of Oolin’s activities. They describe in detail all of his research over the past months.

Two tables feature some of the most expensive ingredients and components Oolin sells. There are also some bones and desiccated organs on the table. They belong to fey creatures and are the main ingredient in the magical healing ointments. Only an expert in anatomy and botany can recognize the organs for what they are.

The passage to Area 8 is hidden behind a secret door. A successful DC 18 Wisdom (Perception) check reveals the presence of the movable brick that activates the door.

Two braziers light the room when Oolin is working here. The table features surgery instruments and blades of different sizes. A large iron cage dominates the middle of the room. A dryad in bad condition is trapped inside. The dryad is missing two limbs and several spoon-sized chunks all over their body. Oolin, in his desperate attempt to advance his research, has kept the dryad alive but he still harvests their body for ingredients for his potions and ointments.

If set free, the dryad and her allies in the forest will thank the adventurers and offer their aid in anything they ask. The dryad is hurt and needs a few months in close distance to their father tree to fully heal.

These are the general features of Oolin’s apothecary shop. It is located outside of town near the farmlands.

Terrain. The area around the shop consists of rolling hills with few trees. Inside the shop, the shelves and tables are so close that moving around is not easy, especially when other customers are there.

Doors. All wooden doors feature standard locks. The front door features a delicate work of art carved on the upper side of it. The bas-relief depicts a fairy flying over a flower field. An adventurer can bypass an average lock with a successful DC 14 Dexterity (Thieves Tools) check.

Trapdoor. The entrance to the basement is hidden under the carpet in Area 4. The trapdoor features a good-quality lock which cannot be manipulated from below. A successful DC 16 Dexterity (Thieves Tools) check bypasses the lock.

Light. The shop and the house on the second floor have large windows which light the place during the day. At night, torches on sconces provide dim light when the area is in use. The basement is in complete darkness unless Oolin lights the braziers in Area 8.

Smell. A person within the establishment perceives the strong smell of many ingredients and substances all at once. The overall sensation is one of intense acrid and sour tones. Many ingredients on sale are not like that, featuring sweet dour fragrances but the sour smells take dominance often.

One thought on “293 Apothecary Shop”