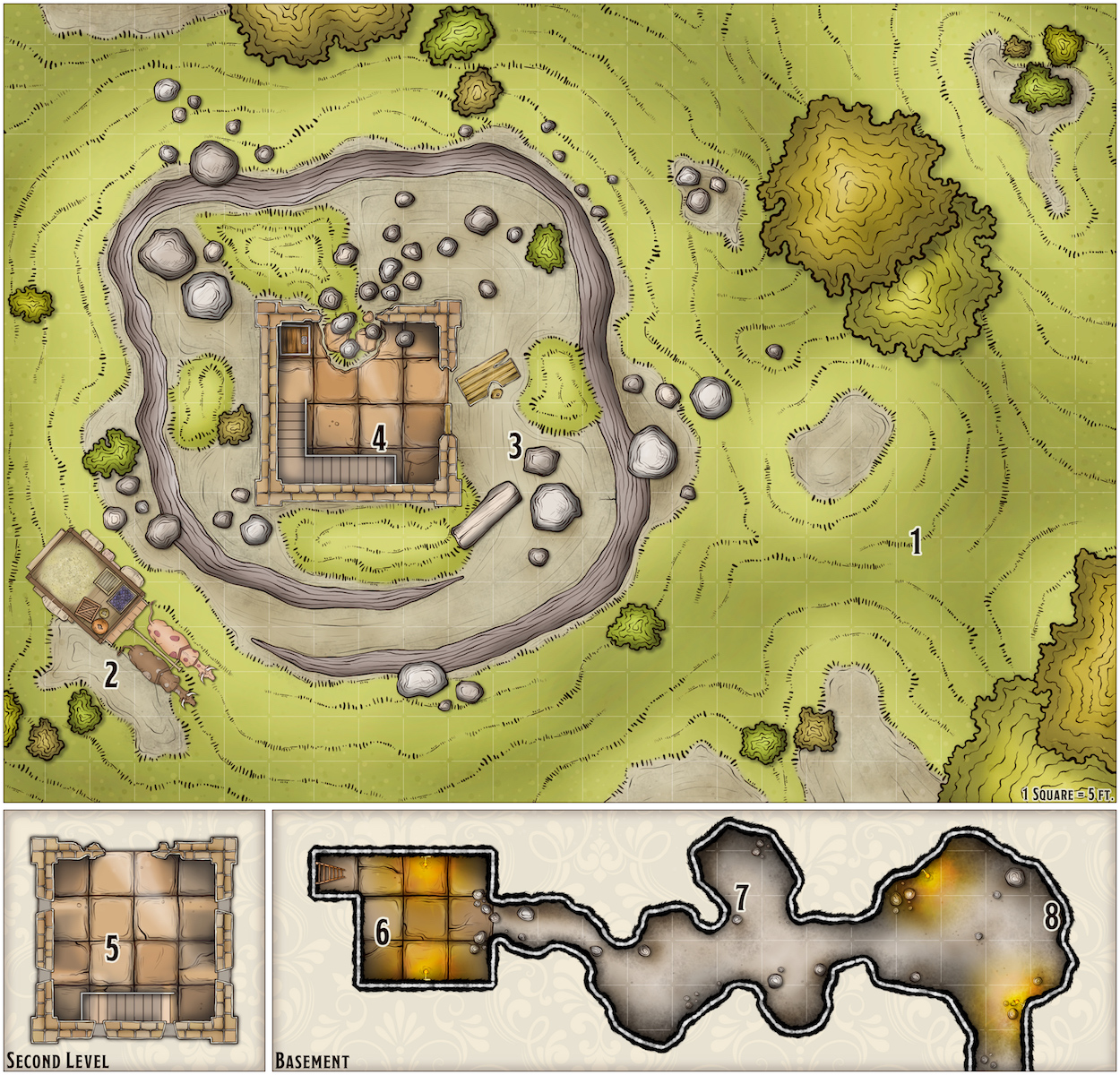 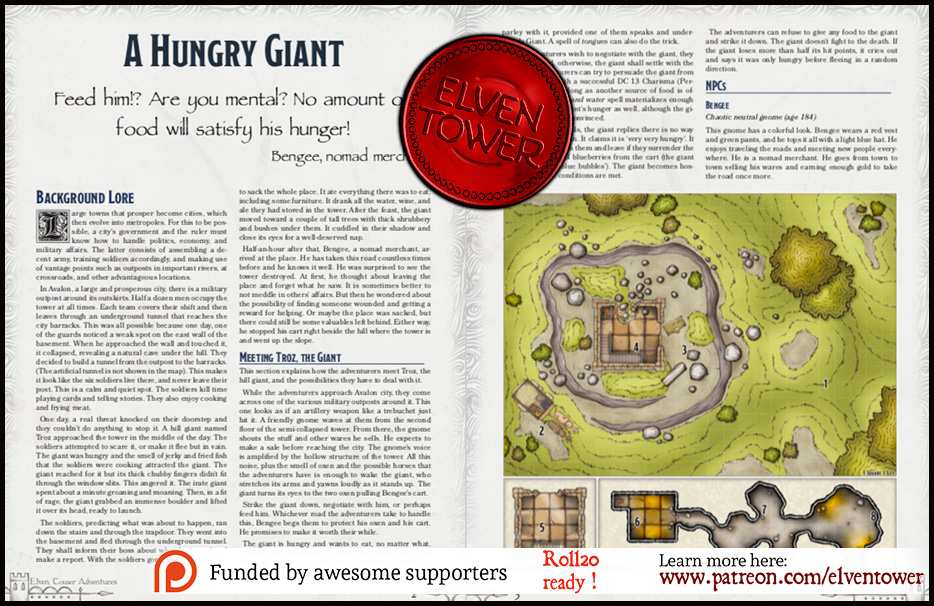 Large towns that prosper become cities, which then evolve into metropoles. For this to be possible, a city’s government and the ruler must know how to handle politics, economy, and military affairs. The latter consists of assembling a decent army, training soldiers accordingly, and making use of vantage points such as outposts in important rivers, at crossroads, and other advantageous locations.

In Avalon, a large and prosperous city, there is a military outpost around its outskirts. Half a dozen men occupy the tower at all times. Each team covers their shift and then leaves through an underground tunnel that reaches the city barracks. This was all possible because one day, one of the guards noticed a weak spot on the east wall of the basement. When he approached the wall and touched it, it collapsed, revealing a natural cave under the hill. They decided to build a tunnel from the outpost to the barracks. (The artificial tunnel is not shown in the map). This makes it look like the six soldiers live there, and never leave their post. This is a calm and quiet spot. The soldiers kill time playing cards and telling stories. They also enjoy cooking and frying meat.

One day, a real threat knocked on their doorstep and they couldn’t do anything to stop it. A hill giant named Troz approached the tower in the middle of the day. The soldiers attempted to scare it, or make it flee but in vain. The giant was hungry and the smell of jerky and fried fish that the soldiers were cooking attracted the giant. The giant reached for it but its thick chubby fingers didn’t fit through the window slits. This angered it. The irate giant spent about a minute groaning and moaning. Then, in a fit of rage, the giant grabbed an immense boulder and lifted it over its head, ready to launch.

The soldiers, predicting what was about to happen, ran down the stairs and through the trapdoor. They went into the basement and fled through the underground tunnel. They shall inform their boss about what happened and make a report. With the soldiers gone, the giant was free to sack the whole place. It ate everything there was to eat, including some furniture. It drank all the water, wine, and ale they had stored in the tower. After the feast, the giant moved toward a couple of tall trees with thick shrubbery and bushes under them. It cuddled in their shadow and close its eyes for a well-deserved nap.

Half-an-hour after that, Bengee, a nomad merchant, arrived at the place. He has taken this road countless times before and he knows it well. He was surprised to see the tower destroyed. At first, he thought about leaving the place and forget what he saw. It is sometimes better to not meddle in others’ affairs. But then he wondered about the possibility of finding someone wounded and getting a reward for helping. Or maybe the place was sacked, but there could still be some valuables left behind. Either way, he stopped his cart right beside the hill where the tower is and went up the slope.

This section explains how the adventurers meet Troz, the hill giant, and the possibilities they have to deal with it.

While the adventurers approach Avalon city, they come across one of the various military outposts around it. This one looks as if an artillery weapon like a trebuchet just hit it. A friendly gnome waves at them from the second floor of the semi-collapsed tower. From there, the gnome shouts the stuff and other wares he sells. He expects to make a sale before reaching the city. The gnome’s voice is amplified by the hollow structure of the tower. All this noise, plus the smell of oxen and the possible horses that the adventurers have is enough to wake the giant, who stretches its arms and yawns loudly as it stands up. The giant turns its eyes to the two oxen pulling Bengee’s cart.

Strike the giant down, negotiate with him, or perhaps feed him. Whichever road the adventurers take to handle this, Bengee begs them to protect his oxen and his cart. He promises to make it worth their while.

The giant is hungry and wants to eat, no matter what. The hill giant immediately turns to the oxen, since they are easy, chubby prey. The adventurers may attempt to parley with it, provided one of them speaks and understands Giant. A spell of tongues can also do the trick.

If the adventurers wish to negotiate with the giant, they must offer food, otherwise, the giant shall settle with the oxen. The adventurers can try to persuade the giant from eating the oxen with a successful DC 13 Charisma (Persuasion) check, as long as another source of food is offered. A create food and water spell materializes enough food to satisfy the giant’s hunger as well, although the giant still needs to be convinced.

If the negotiation fails, the giant replies there is no way he won’t eat both oxen. It claims it is ‘very very hungry’. It promises to not harm them and leave if they surrender the oxen and the box of blueberries from the cart (the giant calls the berries ‘blue bubbles’). The giant becomes hostile unless these conditions are met.

The adventurers can refuse to give any food to the giant and strike it down. The giant doesn’t fight to the death. If the giant loses more than half its hit points, it cries out and says it was only hungry before fleeing in a random direction.

This gnome has a colorful look. Bengee wears a red vest and green pants, and he tops it all with a light blue hat. He enjoys traveling the roads and meeting new people everywhere. He is a nomad merchant. He goes from town to town selling his wares and earning enough gold to take the road once more.

Personality Trait. “Everybody is my friend. Friends buy things.”

Ideal. “I must do my best to sell my wares to anyone.”

Bond. “I’ll settle down once I’ve traveled all around the world.”

Flaw. “It is too easy for me to trust people.”

Troz is basically naked like the rest of its kin. It only wears some thick animal pelts over a part of his torso and its waist. It stinks, it releases a putrid smell just by swinging its massive arms. Its toes are full of fungi and other disgusting flora.

Personality Trait. “If I see, I eat.”

Ideal. “I wish I could create food.”

The following descriptions of areas 1 through 8 correspond to the partially destroyed military outpost near the city.

Terrain. Green healthy fields surround a rocky hill. The ground is not even. Trees with abundant bushes and shrubs dance with the cool wind currents. There are a couple of dry spots on the land. The tower has stone-tile flooring.

Light. The inside of the tower doesn’t have any sconces or sources of light. The basement and the underground tunnel have torches on sconces that light all the way back to the city barracks. (Complete tunnel not shown in the map).

Smells and Sounds. The tower still has some faint smell of fried fish but the giant’ sweat and filth under its fingernails have stained the place as well.

The green fields surrounding the hill feature high grass. Rocks and boulders are scattered all over the place. A successful DC 14 Intelligence (Investigation) check reveals one of the large boulders hit the tower on the side and partially destroyed it. Additionally, a passive Perception score of 14 or higher reveals the presence of the dormant hill giant under a couple of trees to the east of the hill.

Two oxen pull Bengee’s cart Their names are Bertha and Bobby. The cart contains a few crates with spices and other dried foods. The back of the cart is full of hay. Bengee sometimes takes naps in it. A box of blueberries is his most precious product right now. Berries season is still months away, so he is certain to make a fortune with these.

The rocky hill has a natural slope that can be climbed to reach the summit. The tower was built right in the middle of the hill. The hill has some areas with high grass. Large rocks and boulders lay motionless on the ground. What once was the tower’s door, only pieces of wood remain.

Daylight enters the tower from where the door was and from the new huge ‘window’ the giant made. Boulders litter the area where the wall was. There are remnants of cards and chess pieces scattered all over the room. Some of the walls have scratch marks. A successful DC 13 Intelligence (Investigation) check reveals the marks were made by the giant’s chubby fingers. The soldiers must have struggled for a bit before escaping through the trapdoor. There is a set of stairs that leads to the second level of the tower (area 5), and a trapdoor that leads to the basement (area 6).

The room is now empty since the giant took everything from here. The damage on the north wall is less than on the first floor, but there is a huge hole anyway. Bengee waves the adventurers from here (see Dealing with the Giant). When he notices the giant and its intentions to eat his oxen, he begs the adventurers to do something. He hides in the tower, thinking it is safer to stay inside.

The trapdoor leads to a wooden ladder that descends 15 feet. The basement is empty, but there is a collapsed wall to the east that leads to a natural cave under the hill. Since the guards seldom had anything to do, they organized a local wrestling tournament among them. From the six men working at the time, two stay upstairs. Two men wrestle, and the other two are referees and spectators at the same time. They keep tabs on who beat who and make bets on future fights. The walls of the basement are scribbled with tallies and annotations of recent combats. It seems like all three teams of soldiers that work here participate in this.

This natural cave is a bit humid and dark. There are torches in the basement and the tunnel but not here. There are a few rocks on the ground. The cave is about 60 feet long and then continues southward. If the adventurers come through here, three spider swarms attack the party.

This is a 10-feet-wide tunnel that leads to the city barracks. It is a thirty-minute walk. Torches are lighting the way. Soldiers use this tunnel to go home when their shift ends. And they go through it once more when duty calls. If the adventurers travel to the city using this tunnel, roll 1d10 to determine what threat they may encounter. The location of the encounter is not shown on the map:

If the adventurers fed the giant through magic or by any other means that Bengee’s food and oxen, he thanks the party and pays them 15 gold pieces each for their trouble. He knows it is not a fortune, but he cannot afford to pay them anymore.

If the negotiation required the oxen and the blueberries to be surrendered, he appreciates the fact that they helped, since he wouldn’t have been able to sort this out himself but Bengee confesses he cannot pay them any gold since he needs to make up for his loses.

If the conflict is solved by force, Bengee pays the adventurers 15 gold pieces each, as long as his wares and oxen are safe and sound.