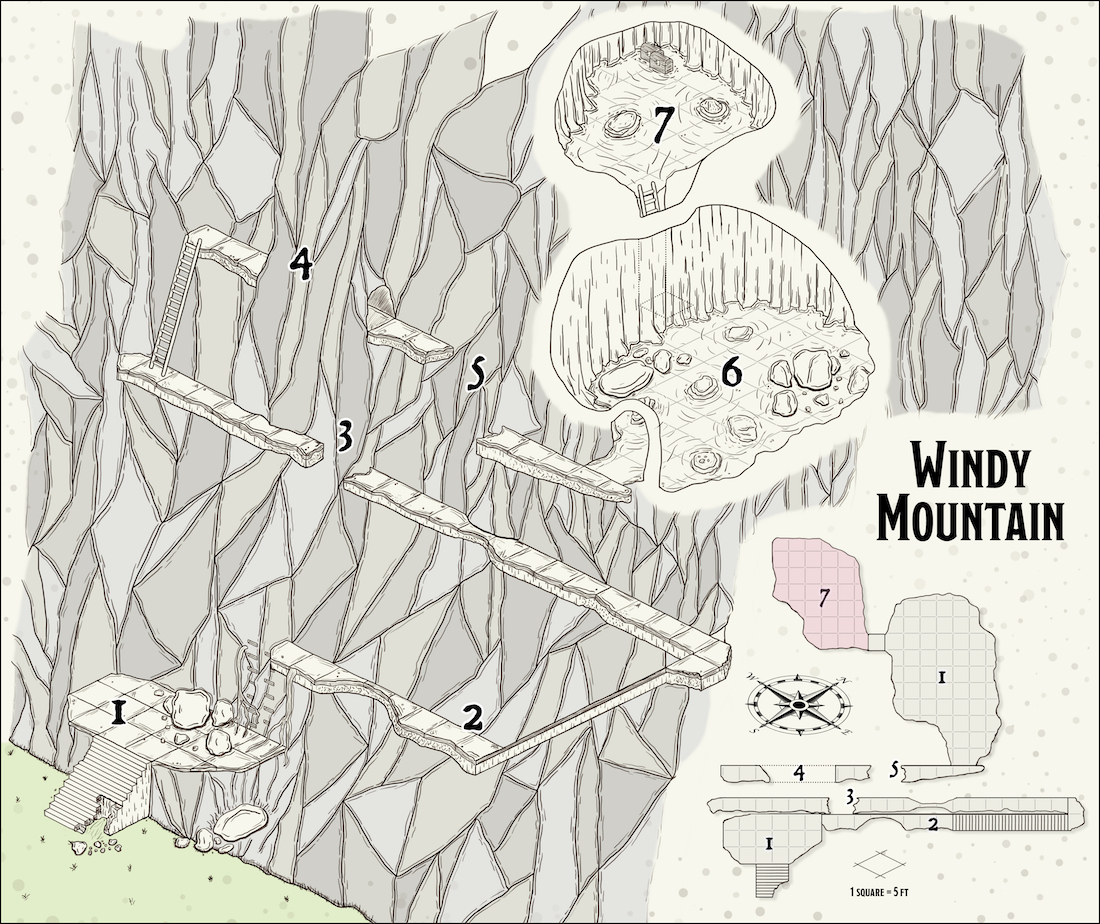 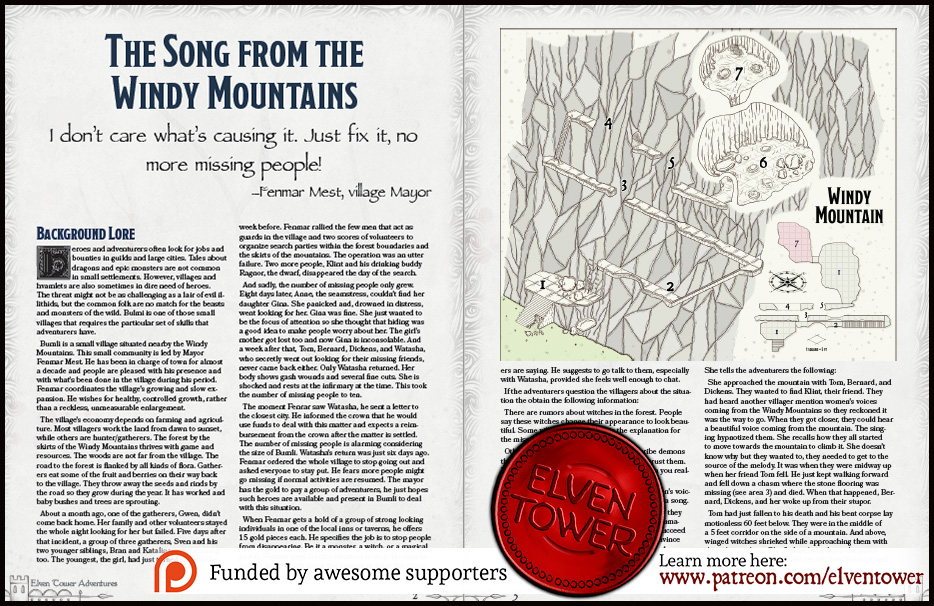 Heroes and adventurers often look for jobs and bounties in guilds and large cities. Tales about dragons and epic monsters are not common in small settlements. However, villages and hamlets are also sometimes in dire need of heroes. The threat might not be as challenging as a lair of evil illithids, but the common folk are no match for the beasts and monsters of the wild. Bulmi is one of those small villages that requires the particular set of skills that adventurers have.

Bumli is a small village situated nearby the Windy Mountains. This small community is led by Mayor Fenmar Mest. He has been in charge of town for almost a decade and people are pleased with his presence and with what’s been done in the village during his period. Fenmar coordinates the village’s growing and slow expansion. He wishes for healthy, controlled growth, rather than a reckless, unmeasurable enlargement.

The village’s economy depends on farming and agriculture. Most villagers work the land from dawn to sunset, while others are hunter/gatherers. The forest by the skirts of the Windy Mountains thrives with game and resources. The woods are not far from the village. The road to the forest is flanked by all kinds of flora. Gatherers eat some of the fruit and berries on their way back to the village. They throw away the seeds and rinds by the road so they grow during the year. It has worked and baby bushes and trees are sprouting.

About a month ago, one of the gatherers, Gwen, didn’t come back home. Her family and other volunteers stayed the whole night looking for her but failed. Five days after that incident, a group of three gatherers, Sven and his two younger siblings, Bran and Katalina, went missing too. The youngest, the girl, had just turned sixteen the week before. Fenmar rallied the few men that act as guards in the village and two scores of volunteers to organize search parties within the forest boundaries and the skirts of the mountains. The operation was an utter failure. Two more people, Klint and his drinking buddy Ragnor, the dwarf, disappeared the day of the search.

And sadly, the number of missing people only grew. Eight days later, Anne, the seamstress, couldn’t find her daughter Gina. She panicked and, drowned in distress, went looking for her. Gina was fine. She just wanted to be the focus of attention so she thought that hiding was a good idea to make people worry about her. The girl’s mother got lost too and now Gina is inconsolable. And a week after that, Tom, Bernard, Dickens, and Watasha, who secretly went out looking for their missing friends, never came back either. Only Watasha returned. Her body shows gash wounds and several fine cuts. She is shocked and rests at the infirmary at the time. This took the number of missing people to ten.

The moment Fenrar saw Watasha, he sent a letter to the closest city. He informed the crown that he would use funds to deal with this matter and expects a reimbursement from the crown after the matter is settled. The number of missing people is alarming considering the size of Bumli. Watasha’s return was just six days ago. Fenmar ordered the whole village to stop going out and asked everyone to stay put. He fears more people might go missing if normal activities are resumed. The mayor has the gold to pay a group of adventurers, he just hopes such heroes are available and present in Bumli to deal with this situation.

When Fenmar gets a hold of a group of strong-looking individuals in one of the local inns or taverns, he offers 15 gold pieces each. He specifies the job is to stop people from disappearing. Be it a monster, a witch, or a magical portal, Fenmar pays for this situation to stop. He says he doesn’t know much about the rumors or what the villagers are saying. He suggests to go talk to them, especially with Watasha, provided she feels well enough to chat.

If the adventurers question the villagers about the situation the obtain the following information:

If the adventurers visit Watasha at the infirmary, they can try to talk to her. She is still in shock and traumatized by what she witnessed. A character must succeed on a DC 15 Charisma (Persuasion) check to convince Watasha to describe what she saw. Watasha can be soothed with a calm emotions spell too. If she is persuaded to talk, she does so with a weak, trembling voice. She tells the adventurers the following:

She approached the mountain with Tom, Bernard, and Dickens. They wanted to find Klint, their friend. They had heard another villager mention women’s voices coming from the Windy Mountains so they reckoned it was the way to go. When they got closer, they could hear a beautiful voice coming from the mountain. The singing hypnotized them. She recalls how they all started to move towards the mountain to climb it. She doesn’t know why but they wanted to, they needed to get to the source of the melody. It was when they were midway up when her friend Tom fell. He just kept walking forward and fell down a chasm where the stone flooring was missing (see area 3) and died. When that happened, Bernard, Dickens, and her woke up from their stupor.

Tom had just fallen to his death and his bent corpse lay motionless 60 feet below. They were in the middle of a 5 feet corridor on the side of a mountain. And above, winged witches shrieked while approaching them with their sharp talons. She fled and ran down the stairs while covering her head. She recalls how Bernard and Dickens covered her way out. That makes her feel guilty. After this, Watasha starts sobbing and it is not possible to draw another word from her regarding this topic.

Fenmar doesn’t wear fancy clothes. If he didn’t mention it, one would think he is another farmer. He likes to work the land as well and he is in good shape. He is straightforward. He cares for the community but his indifference to details and direct involvement hinder his intentions to protect Bulmi and make it prosper.

Personality Trait. “Don’t leave for tomorrow what you can do today.”

Ideal. “If everybody thought like me, the world would be a better place.”

Bond. “Bumli is my life, I must protect it and see for its future.”

Flaw. “I don’t care much about details, the less I meddle in complicated affairs, the better.”

The following descriptions of areas 1 through 7 correspond to the Windy Mountains map.

Story. The Windy Mountains are a huge rocky formation. An ancient temple was once often visited at the top. The only way to access this temple was by climbing the mountain. A group of monks built stone pathways and stairs on the side of the mountain long ago. Centuries have passed and the monks no longer inhabit these lands. However, the ruins of the temple and their old pathways remain.

Terrain. The stone tile flooring of the pathways shows significant natural erosion damage. Several sections of the pathways are cracked or incomplete. Stone tiles sections that are not complete are considered difficult terrain. The caves’ floor is hard dirt and ground.

Smells and Sounds. The beautiful song of the harpies can be heard 300 feet away from the mountain. While charmed, the harpies’ voice is mesmerizing and tantalizing. Characters immune to the harpies’ song hear shrieks and wails. The harpies’ lair is laid with offal. The smell of rot is strong enough for eyes to water.

There are six harpies in the cave. The harpies try to lure their victims with their singing. When potential prey are climbing the mountain, they attack. They dive and attempt to push their victims off the pathways to watch them fall and crack their skulls. The 6 harpies in area 6 wait for their song to do its job. If the luring song doesn’t work, they throw rocks and skulls to incite and enrage intruders. When the adventurers are midway up (areas 3, 4, and 5) the harpies come out of the cave and attempt to make the adventurers trip and fall to their deaths.

The base of the mountain has a small platform. The steps are partially destroyed but are still climbable. Large rocks and boulders mark the place where another set of stairs stood before. A passive Perception score of 13 or higher reveals there are some cracks on the mountainside to climb to a pathway 20 feet above.

There are dry blood marks on the stone tiles along the way. Thick, brown feathers have accumulated in cracks on the floor and the mountain wall. The stairs ascend 25 feet before doubling back to another pathway.

This long pathway is 100 feet long. There are two hazards. First, characters must squeeze where the mountainside overlaps with the stone tile. Second, a character must succeed on a DC 12 Strength (Athletics) check to jump across the gap. A character who fails this check can grab onto the edge of the pathway with a successful DC 13 Dexterity check to avoid falling. Failing either check by 5 or more results in falling. A character that falls from this height goes down 60 feet. The fall deals 19 (6d6) bludgeoning damage. The pathway ends with a wooden hand ladder that goes up 25 feet. The harpies stole this ladder and placed it here. Its purpose is to allow intruders to get close to the top. The harpies sing or attack once the victim is too high to escape without risking a deadly fall.

The 20-feet-long tunnel goes through a hollowed-out section of the mountainside. After the tunnel, the pathway ends abruptly.

It appears that a complete set of stairs has collapsed from the mountainside, leaving a gap in between pathway sections. Jumping down and across the gap requires a successful DC 14 Strength (Athletics) check. A character who fails this check can grab onto the edge of the pathway with a successful DC 13 Dexterity check to avoid falling. Failing either check by 5 or more results in falling. A character that falls from this height goes down 85 feet. The fall deals 28 (8d6) bludgeoning damage.

There are several human carcasses and corpses scattered around this humid cave. A successful DC 12 Intelligence (Investigation) check reveals the partial corpses of the ten missing people are here, among with other humanoid creatures. Large rocks and boulders crowd the room.

Secret Door. A passive Perception score of 15 or higher reveals a pile of rubble blocks a secret passage leading to area 7.

The harpies kept their treasures and loot in this cave. They managed to snatch chests from travelers on the road. The chests are not locked but their contents are not the usual valuables people keep.

Treasure. The chests contain the following: leather pouches with silver and copper pieces, a set of small wooden figurines, bloody cloths and napkins, two jars with ears and eyes in a yellowish solution, locks of hair glued together with an oozy white paste, and a couple of silverware pieces. The collective value of this treasure is 3 gold pieces.

Fenmar thanks the adventurers for their job when they return and pays them the agreed-upon amount. The village asks them to stay for a small feast in their honor. It is a small celebration since many people are sad and still mourn their dead.

If the adventurers bring the corpses and remains of the missing people to the village, the village folk decide to gather some gold as a reward and a token of their appreciation. They give the party 35 gold pieces and thank the gods for having mercy on their relatives’ souls. Now they can be properly buried and their souls shall find peace.