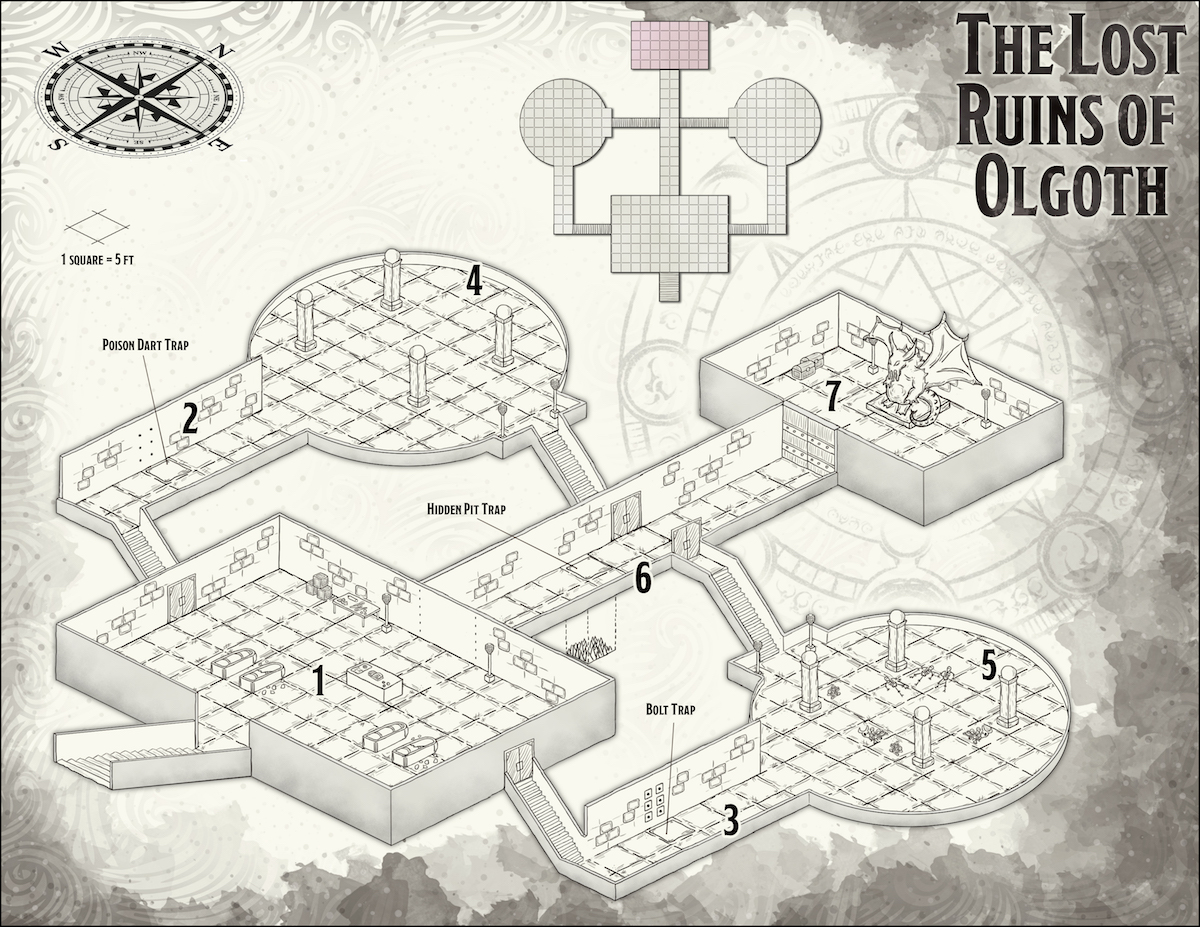 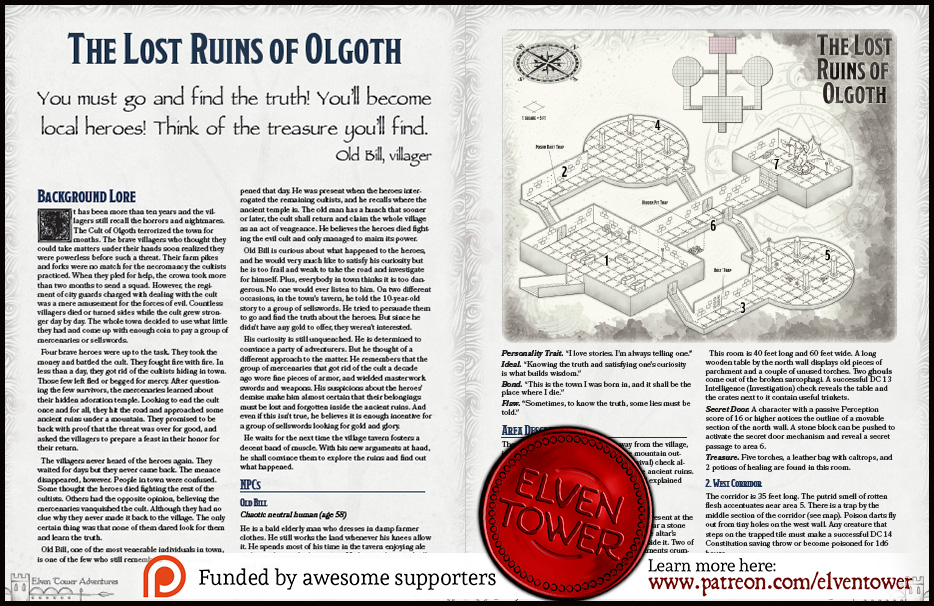 It has been more than ten years and the villagers still recall the horrors and nightmares. The Cult of Olgoth terrorized the town for months. The brave villagers who thought they could take matters under their hands soon realized they were powerless before such a threat. Their farm pikes and forks were no match for the necromancy the cultists practiced. When they pled for help, the crown took more than two months to send a squad. However, the regiment of city guards charged with dealing with the cult was a mere amusement for the forces of evil. Countless villagers died or turned sides while the cult grew stronger day by day. The whole town decided to use what little they had and come up with enough coin to pay a group of mercenaries or sellswords.

Four brave heroes were up to the task. They took the money and battled the cult. They fought fire with fire. In less than a day, they got rid of the cultists hiding in town. Those few left fled or begged for mercy. After questioning the few survivors, the mercenaries learned about their hidden adoration temple. Looking to end the cult once and for all, they hit the road and approached some ancient ruins under a mountain. They promised to be back with proof that the threat was over for good, and asked the villagers to prepare a feast in their honor for their return.

The villagers never heard of the heroes again. They waited for days but they never came back. The menace disappeared, however. People in town were confused. Some thought the heroes died fighting the rest of the cultists. Others had the opposite opinion, believing the mercenaries vanquished the cult. Although they had no clue why they never made it back to the village. The only certain thing was that none of them dared look for them and learn the truth.

Old Bill, one of the most venerable individuals in town, is one of the few who still remembers well what happened that day. He was present when the heroes interrogated the remaining cultists, and he recalls where the ancient temple is. The old man has a hunch that sooner or later, the cult shall return and claim the whole village as an act of vengeance. He believes the heroes died fighting the evil cult and only managed to maim its power.

Old Bill is curious about what happened to the heroes, and he would very much like to satisfy his curiosity but he is too frail and weak to take the road and investigate for himself. Plus, everybody in town thinks it is too dangerous. No one would ever listen to him. On two different occasions, in the town’s tavern, he told the 10-year-old story to a group of sellswords. He tried to persuade them to go and find the truth about the heroes. But since he didn’t have any gold to offer, they weren’t interested.

His curiosity is still unquenched. He is determined to convince a party of adventurers. But he thought of a different approach to the matter. He remembers that the group of mercenaries that got rid of the cult a decade ago wore fine pieces of armor, and wielded masterwork swords and weapons. His suspicions about the heroes’ demise make him almost certain that their belongings must be lost and forgotten inside the ancient ruins. And even if this isn’t true, he believes it is enough incentive for a group of sellswords looking for gold and glory.

He waits for the next time the village tavern fosters a decent band of muscle. With his new arguments at hand, he shall convince them to explore the ruins and find out what happened.

He is a bald elderly man who dresses in damp farmer clothes. He still works the land whenever his knees allow it. He spends most of his time in the tavern enjoying ale with travelers and adventurers. He loves to hear and tell good stories.

Ideal. “Knowing the truth and satisfying one’s curiosity is what builds wisdom.”

Bond. “This is the town I was born in, and it shall be the place where I die.”

Flaw. “Sometimes, to know the truth, some lies must be told.”

The ruins are located a few miles away from the village, inside a mountain. When exploring the mountain outskirts, a successful DC 13 Wisdom (Survival) check allows a character to find the entrance to the ancient ruins. The roll is made with advantage if Old Bill explained what he knows about how to get there.

A strong smell of decay and putrefaction is present at the entrance. Four aligned sarcophagi lay still near a stone pedestal. A large time-worn book rests on the altar’s surface, a crumbling piece of parchment beside it. Two of the sarcophagi’s caps are broken, their fragments crumbled on the dusty stone-tile flooring. Two corpses inside appear to move.

This room is 40 feet long and 60 feet wide. A long wooden table by the north wall displays old pieces of parchment and a couple of unused torches. Two ghouls come out of the broken sarcophagi. A successful DC 13 Intelligence (Investigation) check reveals the table and the crates next to it contain useful trinkets.

Secret Door. A character with a passive Perception score of 16 or higher notices the outline of a movable section of the north wall. A stone block can be pushed to activate the secret door mechanism and reveal a secret passage to area 6.

Treasure. Five torches, a leather bag with caltrops, and 2 potions of healing are found in this room.

The corridor is 35 feet long. The putrid smell of rotten flesh accentuates near area 5. There is a trap by the middle section of the corridor (see map). Poison darts fly out from tiny holes on the west wall. Any creature that steps on the trapped tile must make a suc­cessful DC 14 Constitution saving throw or become poisoned for 1d6 hours.

The corridor is 35 feet long. There is a trap by the middle section of the corridor (see map). Bolts fly out from openings on the east and west wall. Any creature that steps on the trapped tile must succeed on a DC 15 Dexterity saving throw or take 12 (4d6) piercing damage.

There are four pillars in the room. Their surface shows scratches and scarlet red blood marks. A horrible and stinging stench of vomit and spew fills the place. Yellow and green stains smudge and tarnish the stone floor. Five humanoid figures stand idle beside the pillars. Their bones are showing and pieces of rotten flesh hang from their limbs.

This circular room has a 20 feet radius. Two ghouls and three zombies attack intruders on sight. Scattered in the room are a few pieces of clothing such as leather shoes, belts, and vests. These belong to the undead, from the time when they were alive.

There are four pillars in the room. Several piles of bones and skeletons crowd the place. A soft clicking sound comes from the scattered bones around the room. The osseous matter and rancid cartilage move, as if by magic, and assembles into several vaguely humanoid figures. Skeletal warriors shout in a nefarious and heinous battle cry.

This circular room has a 20 feet radius. Two minotaur skeleton and six skeletons rise and fight. The minotaurs grab large axes that were leaning behind one of the pillars.

This 60-feet-long corridor has a trap. The hidden pit trap causes a 5 by 5 feet section of the floor to open up to a spiked pit (see map). Any creature that steps on the trapped tile must succeed on a DC 15 Dexterity saving throw or fall to the pit and take 12 (4d6) piercing damage and be knocked prone. Climbing out of the pit requires a successful DC 13 Strength (Athletics) check.

A malevolent aura surrounds the large statue of an obese, winged demon. The undead creatures surrounding the sculpture create a cacophony of angry growls and roars. An evil force drives the ire of these long-dead humans. It is almost palpable.

This is where the cult made sacrifices and offerings to their demon god. And this is where the mercenaries who saved the town died ten years ago. The priest among them, sacrificed herself to seal the evil in this room of the ruins. She placed her sacred symbol on the door from the inside of the room to prevent Olgoth from influencing people again.

The undead bodies of the heroes have resided here since. Four ghasts are all that remains of them. They growl and attack when the doors burst open. In the second round of combat, the demonic presence of Olgoth makes itself physical. A shadow demon emerges from the statue. The shadow demon is fat and resembles the stone statue, although it is considerably smaller.

There are two wooden chests west of the room. They aren’t locked.

Treasure. Cultists stored treasure in the chests as a tribute to Olgoth. The first of them contains sapphires and rubies, leather pouches with gold coins, and a couple of sophisticated silverware pieces. The collective value of the first chest is 375 gp. In the second chest, there are two weapons: a +1 longsword and a +1 dagger, and inside a small fancy wooden box, there is a periapt of health.

Terrain. The ruins are ancient and abandoned. The walls and the tiles on the floor show notable signs of deterioration. There is dust covering every surface.

Traps. There are three traps in the ruins. A passive Perception score of 16 or higher or a successful DC 16 Wisdom (Perception) check reveals the presence of any of them. A character using thieves’ tools can disarm any of the traps with a successful DC 14 Dexterity check.

Light. There are unlit torches placed on pedestals in each room.

Smells and Sounds. The decay of decomposing corpses and bones fills the place. Grunts and gnarls can be heard when approaching the undead in the circular chambers.