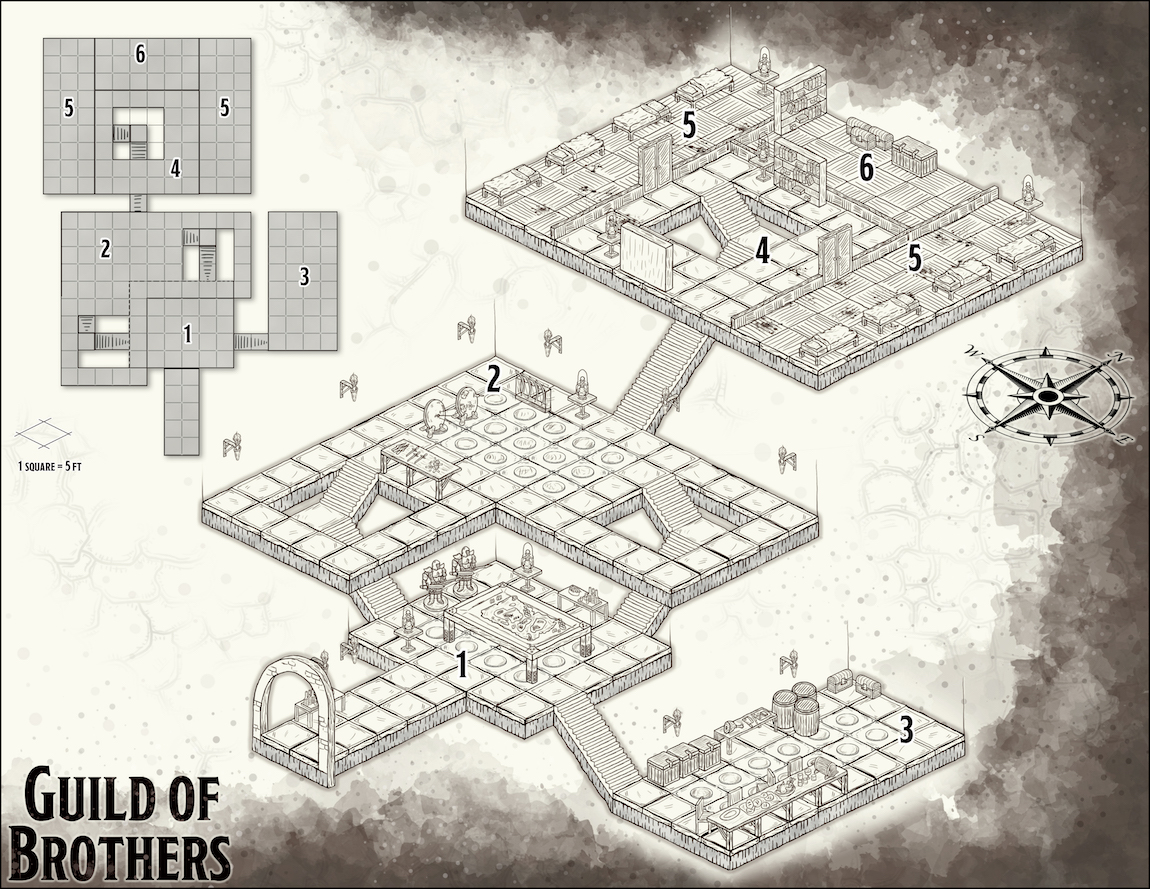 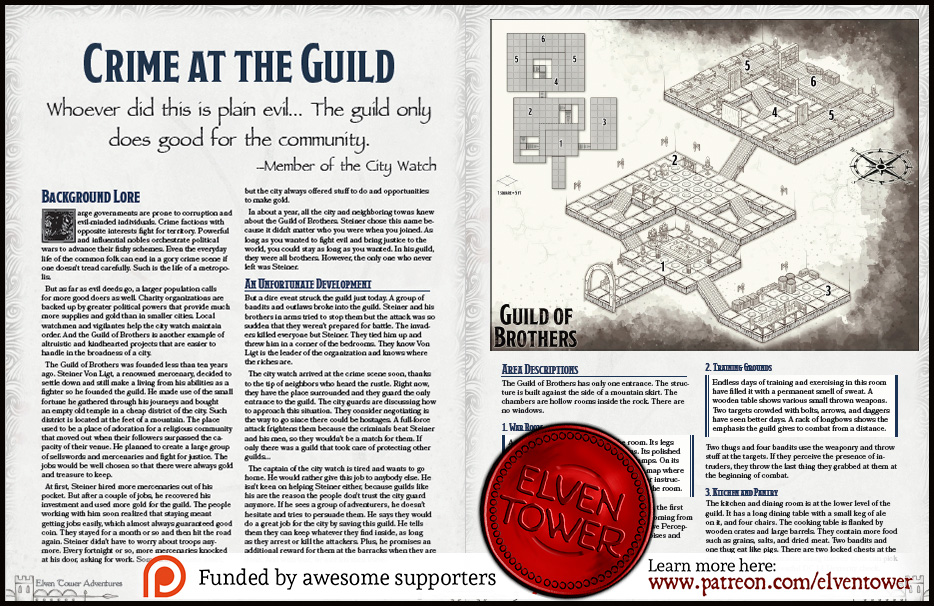 Large governments are prone to corruption and evil-minded individuals. Crime factions with opposite interests fight for territory. Powerful and influential nobles orchestrate political wars to advance their fishy schemes. Even the everyday life of the common folk can end in a gory crime scene if one doesn’t tread carefully. Such is the life of a metropolis.

But as far as evil deeds go, a larger population calls for more good doers as well. Charity organizations are backed up by greater political powers that provide much more supplies and gold than in smaller cities. Local watchmen and vigilantes help the city watch maintain order. And the Guild of Brothers is another example of altruistic and kindhearted projects that are easier to handle in the broadness of a city.

The Guild of Brothers was founded less than ten years ago. Steiner Von Ligt, a renowned mercenary, decided to settle down and still make a living from his abilities as a fighter so he founded the guild. He made use of the small fortune he gathered through his journeys and bought an empty old temple in a cheap district of the city. Such district is located at the feet of a mountain. The place used to be a place of adoration for a religious community that moved out when their followers surpassed the capacity of their venue. He planned to create a large group of sellswords and mercenaries and fight for justice. The jobs would be well chosen so that there were always gold and treasure to keep.

At first, Steiner hired more mercenaries out of his pocket. But after a couple of jobs, he recovered his investment and used more gold for the guild. The people working with him soon realized that staying meant getting jobs easily, which almost always guaranteed good coin. They stayed for a month or so and then hit the road again. Steiner didn’t have to worry about troops anymore. Every fortnight or so, more mercenaries knocked at his door, asking for work. Some stayed, some didn’t, but the city always offered stuff to do and opportunities to make gold.

In about a year, all the city and neighboring towns knew about the Guild of Brothers. Steiner chose this name because it didn’t matter who you were when you joined. As long as you wanted to fight evil and bring justice to the world, you could stay as long as you wanted. In his guild, they were all brothers. However, the only one who never left was Steiner.

But a dire event struck the guild just today. A group of bandits and outlaws broke into the guild. Steiner and his brothers in arms tried to stop them but the attack was so sudden that they weren’t prepared for battle. The invaders killed everyone but Steiner. They tied him up and threw him in a corner of the bedrooms. They know Von Ligt is the leader of the organization and knows where the riches are.

The city watch arrived at the crime scene soon, thanks to the tip of neighbors who heard the rustle. Right now, they have the place surrounded and they guard the only entrance to the guild. The city guards are discussing how to approach this situation. They consider negotiating is the way to go since there could be hostages. A full-force attack frightens them because the criminals beat Steiner and his men, so they wouldn’t be a match for them. If only there was a guild that took care of protecting other guilds…

The captain of the city watch is tired and wants to go home. He would rather give this job to anybody else. He isn’t keen on helping Steiner either, because guilds like his are the reason the people don’t trust the city guard anymore. If he sees a group of adventurers, he doesn’t hesitate and tries to persuade them. He says they would do a great job for the city by saving this guild. He tells them they can keep whatever they find inside, as long as they arrest or kill the attackers. Plus, he promises an additional reward for them at the barracks when they are done. And with that, he and his men leave.

The Guild of Brothers has only one entrance. The structure is built against the side of a mountain skirt. The chambers are hollow rooms inside the rock. There are no windows.

A massive war table dominates the room. Its legs are carved with fancy curving patterns. Its polished wood shines under the light of the oil lamps. On its surface, red velvet lining displays a large map where small toy armies and boats silently wait for instructions. Two polished sets of armor oversee the room.

A 25-feet-long corridor leads to the war room, the first level of the guild. There is a soft fruity scent coming from the bottles of wine and bowls of fruit. A passive Perception score of 14 or higher reveals chewing noises and laughter coming from downstairs (area 3).

Endless days of training and exercising in this room have filled it with a permanent smell of sweat. A wooden table shows various small thrown weapons. Two targets crowded with bolts, arrows, and daggers have seen better days. A rack of longbows shows the emphasis the guild gives to combat from a distance.

Two thugs and four bandits use the weaponry and throw stuff at the targets. If they perceive the presence of intruders, they throw the last thing they grabbed at them at the beginning of combat.

The kitchen and dining room is at the lower level of the guild. It has a long dining table with a small keg of ale on it, and four chairs. The cooking table is flanked by wooden crates and large barrels. They contain more food such as grains, salts, and dried meat. Two bandits and one thug eat like pigs. There are two locked chests at the end of the room. A character using thieves’ tools can pick either lock with a successful DC 14 Dexterity check.

Treasure. There are expensive spices, plants, and flowers for cooking. A small compartment in each chest contains leather pouches with gold coins. They have 50 gp in total.

This area is a small vestibule between both bedrooms (area 5). Two intricately-carved sets of wooden doors show the entrance to the bedrooms. There are bloodstains near each of them, premonitions of a gory scene beyond them. There are two large bookcases with a small table with an oil lamp beside them. Most of the books are about sword fighting, wrestling, archery, and weaponry. There are a few fantasy novels and war books. A successful DC 14 Intelligence (Investigation) check reveals the presence of five books that are worth about 35 gold pieces to the right buyer. Three bandits and one thug come out of the room to the west and attack.

When the characters enter any of the rooms from the antechamber, read the following:

A horrific scene of bloodbath and tragedy awaits in the room. The corpses of mercenaries and sellswords on the beds still have expressions of terror on their faces. Bloodstains cover the place with a smell of iron. The wooden flooring starts to swell where puddles of crimson red liquid have formed.

Both bedrooms are identical in size but the furnishings are mirrored. There are four individual beds in each of them. Six people were staying with Steiner at the moment of the attack. There are three corpses in each of the rooms. Steiner is being held hostage in the eastern room. A bandit leader, two thugs, and three bandits try to make him talk and reveal where the treasures are.

Secret Door. A passive Perception score of 16 or higher reveals a switch hidden behind a loose stone block on the wall at the end of the eastern room. This activates the sliding door to area 6.

The secret room has a large chest in the middle beside a couple of smaller ones. At the west end of the room, there is a bookcase with sophisticated books. Some of the books here have precious metals embedded on the bindings. Some spines have gold and silver decorations. Some others have silver and copper covers or edges.

If the adventurers save Steiner, he deeply thanks them for saving his life. He rewards them with 100 gold pieces each, hoping that it is more than enough to pay them for their services. A successful DC 13 Charisma (Persuasion/Intimidation) check allows a character to coarse Steiner into paying more. He reluctantly accepts to pay 150 gold pieces to each, and promptly asks them to leave.

If the adventurers want to force Steiner into telling them where the real treasure is, he refuses to say anything and curses them. He says they are no better than the human swine who ambushed them. A successful DC 18 Charisma (Intimidation) check allows a character to make him break and reveal where the secret room is.

Terrain. The guild is well floored. The first three levels of the guild have squared carved tiles. The upper level features wooden flooring in the bedrooms.

Light. The guild has torches on sconces in the first three levels. There are oil lamps around the guild as well in case more light is needed somewhere.

Smells and Sounds. The whole guild has a strong smell of sweat. The only place that doesn’t smell like this is the kitchen, where the smell of food and ale is strong enough to predominate.