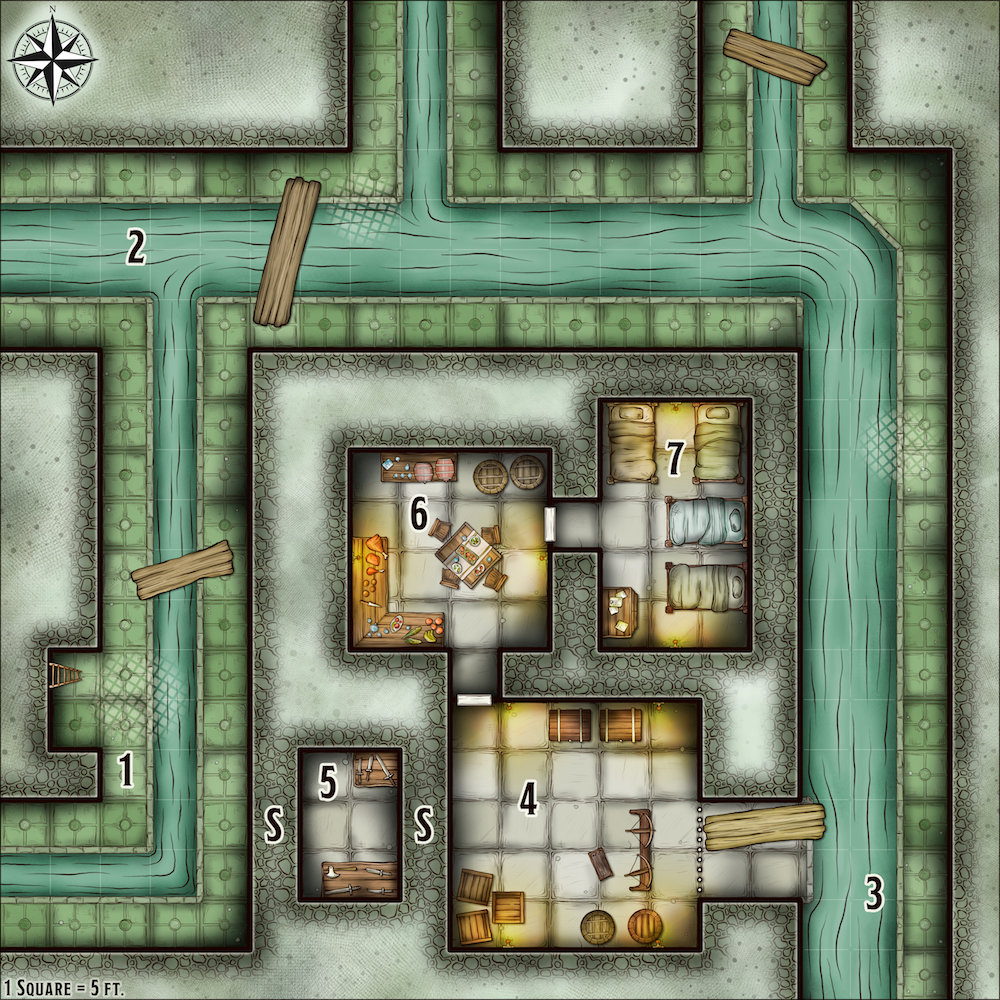 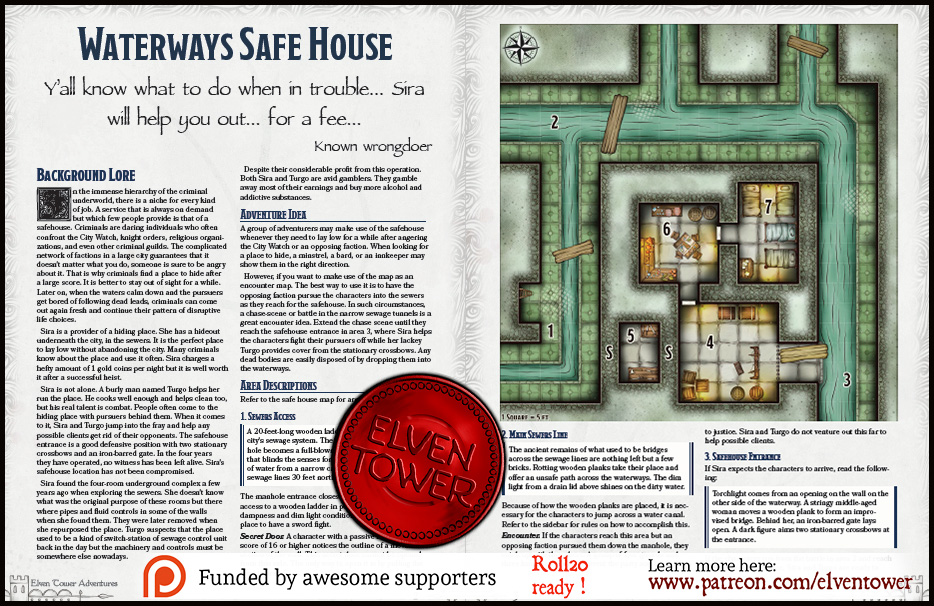 In the immense hierarchy of the criminal underworld, there is a niche for every kind of job. A service that is always on demand but which few people provide is that of a safehouse. Criminals are daring individuals who often confront the City Watch, knight orders, religious organizations, and even other criminal guilds. The complicated network of factions in a large city guarantees that it doesn’t matter what you do, someone is sure to be angry about it. That is why criminals find a place to hide after a large score. It is better to stay out of sight for a while. Later on, when the waters calm down and the pursuers get bored of following dead leads, criminals can come out again fresh and continue their pattern of disruptive life choices.

Sira is a provider of a hiding place. She has a hideout underneath the city, in the sewers. It is the perfect place to lay low without abandoning the city. Many criminals know about the place and use it often. Sira charges a hefty amount of 1 gold coins per night but it is well worth it after a successful heist.

Sira is not alone. A burly man named Turgo helps her run the place. He cooks well enough and helps clean too, but his real talent is combat. People often come to the hiding place with pursuers behind them. When it comes to it, Sira and Turgo jump into the fray and help any possible clients get rid of their opponents. The safehouse entrance is a good defensive position with two stationary crossbows and an iron-barred gate. In the four years they have operated, no witness has been left alive. Sira’s safehouse location has not been compromised.

Sira found the four-room underground complex a few years ago when exploring the sewers. She doesn’t know what was the original purpose of these rooms but there where pipes and fluid controls in some of the walls when she found them. They were later removed when she repurposed the place. Turgo suspects that the place used to be a kind of switch-station of sewage control unit back in the day but the machinery and controls must be somewhere else nowadays.

Despite their considerable profit from this operation. Both Sira and Turgo are avid gamblers. They gamble away most of their earnings and buy more alcohol and addictive substances.

A group of adventurers may make use of the safehouse whenever they need to lay low for a while after angering the City Watch or an opposing faction. When looking for a place to hide, a minstrel, a bard, or an innkeeper may show them in the right direction.

However, if you want to make use of the map as an encounter map. The best way to use it is to have the opposing faction pursue the characters into the sewers as they reach for the safehouse. In such circumstances, a chase-scene or battle in the narrow sewage tunnels is a great encounter idea. Extend the chase scene until they reach the safehouse entrance in area 3, where Sira helps the characters fight their pursuers off while her lackey Turgo provides cover from the stationary crossbows. Any dead bodies are easily disposed of by dropping them into the waterways.

Refer to the safe house map for areas 1 through 7.

A 20-feet-long wooden ladder descends into the old city’s sewage system. The hint of smell from the manhole becomes a full-blown blast of repugnant stench that blinds the senses for a few seconds. The flow of water from a narrow canal meets one of the main sewage lines 30 feet north from the ladder.

The manhole entrance closest to the safe house gives access to a wooden ladder in poor condition. Below, the dampness and dim light conditions make for a difficult place to have a sword fight.

Secret Door. A character with a passive Perception score of 16 or higher notices the outline of a movable section of the wall. This secret door cannot be opened from this side. The only way to open it is by pulling the level in area 5.

The ancient remains of what used to be bridges across the sewage lines are nothing left but a few bricks. Rotting wooden planks take their place and offer an unsafe path across the waterways. The dim light from a drain lid above shines on the dirty water.

Because of how the wooden planks are placed, it is necessary for the characters to jump across a water canal. Refer to the sidebar for rules on how to accomplish this.

Encounter. If the characters reach this area but an opposing faction pursued them down the manhole, they catch up with them here. A group of four guards and three knights attempt to arrest the party and bring them to justice. Sira and Turgo do not venture out this far to help possible clients.

If Sira expects the characters to arrive, read the following:

Torchlight comes from an opening on the wall on the other side of the waterway. A stringy middle-aged woman moves a wooden plank to form an improvised bridge. Behind her, an iron-barred gate lays open. A dark figure aims two stationary crossbows at the entrance.

If the characters run from the battle in area 2 and reach the safehouse entrance, Sira and Turgo are ready to take their side and fight. Sira (bandit captain) holds the plank for the characters to cross and throws daggers at their pursuers. Turgo (bandit) operates the two stationary crossbows and covers the safehouse entrance. After shooting, Turgo spends an action to reload both crossbows.

This large damp room appears to be some kind of storage space. Several mossy wooden crates, barrels, and two chests line the walls. There is a wooden frame with two stationary crossbows pointing at the entrance 5 feet from the iron gate. A box of crossbow bolts rests behind the wooden frame.

After securing the area. Sira informs the characters about the cost of their lodging (1 gp per night, per person). And shows them around the place. The crates and barrels in the area contain food and ale. If the characters ask about the secret passage to area 5, Sira tells them that it is only there for emergencies in case they are overwhelmed. She explains that there are weapons and emergency supplies in the room.

Secret Door. A character with a passive Perception score of 16 or higher notices the outline of a movable section of the wall. A successful DC 14 Intelligence (Investigation) check reveals that pulling the southwest sconce causes the wall to open inward and reveal a secret passage to area 5.

Two wooden tables with several types of weapons are the only furniture in the room. Two crates under the tables contain travel supplies, food rations, and two potions of healing. Sira does not take it lightly if any of these resources are stolen. This stuff is only here for emergencies.

The disgusting sewage stench mixes with the smell of food, vegetables, and ale. The result is not savory in the least. There are several wooden barrels in the room, a dining table, and a wooden table with all kinds of vegetables, meat, and cooking instruments.

The food is fresh and safe to eat despite the smell but the ale has acquired a vinegary taste to it. Turgo drinks it without complaint. It appears that, just like the smell, one can get used to it too.

The sewage smell is less predominant in this room. There are four single beds and a wooden wardrobe in the room. The linens look old. They are damp and the smell is not good.

The sleeping room is not private. Sira or Turgo may come in and out at any given time. They sleep here too but they adapt to their guests and only sleep when the beds are available. The wardrobe is empty, it appears that what Sira and Turgo carry on their person are their only belongings.

The safehouse is located under the city, in the sewers. A branching path from one of the main sewage lines hides a small underground complex.

Terrain. The stone flooring shows signs of water erosion and moss build-up. These marks of passage are slightly less noticeable within areas 6 and 7. Wooden planks function as makeshift bridges across the sewage lines. In combat, crossing over a plank is considered difficult terrain. A successful DC 12 Strength (Athletics) check allows a character to jump across 5-feet-long sewage lines. Increase the skill check to DC 15 for the 10-feet-long sewage lines. Failure of 5 or more means the character falls to the water.

Water. The current is strong in this section of the sewage system. A character who falls on the water must make a successful DC 16 Strength saving throw to swim to the border and climb out of the water. On a fail, the character is dragged 20 feet downstream. Failure of 5 or more means the character has trouble swimming and starts to drown in filth.

Light. The sewage system does not have any light sources but some manholes or accesses on the surface provide indirect dim light. Within the safehouse, torches on sconces provide bright light. Sira tries to change the torches as soon as they go off.

Smells and Sounds. Both the sewage hallways and the safehouse suffer from bad smell. The pungent, repugnant smell from the sewers never subsides. If even, it gets worse during the day because of the heat. However, after staying in the safe house for more than three days, the smell appears to even out and becomes almost imperceptible. A handy trick of the brain.