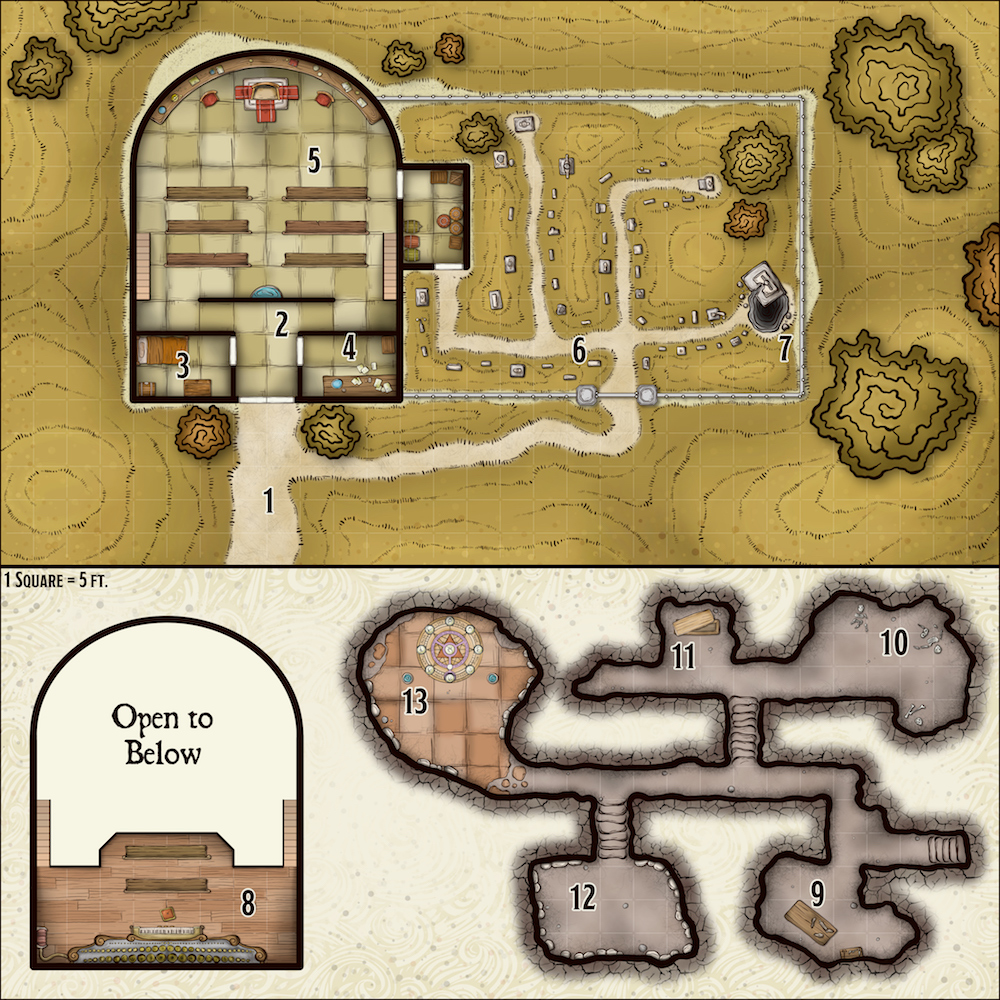 Something terrible happened in the Church of Golden Petals. The few survivors who managed to escape the massacre do not all tell the same story. A few contradictions here and there but there is no reason to deny their allegation. Darkness has fallen on the church and there appears to be no answer or solution to the current situation.

According to their reports, a group of humanoid figures must have opened the abandoned crypts under the graveyard, one of them saw the tombstone that was supposed to close off the access in a different position. These creatures, scores of them, surrounded the church during Friday’s evening service. It happened when Jenn Alistee, the local priestess, prepared to perform the ceremony of wine-sharing. She filled the large chalice and raised it to secure the gods’ blessings. A harsh dry sound disturbed the ceremony as the church’s front doors slammed open. There is a divider wall between the church nave and the entrance. The believers could not see who was it, but they could hear their hungry moans and growls. When they entered the nave proper, all of the believers saw the nature of the uninvited guests.

The aberrant creatures appeared to be decomposing husks of what once was a person. Their skins festering and amorphous. Their eyes distorted and atavistic. But worst of all was the fiendish nature of their mouths and jaws. Their fluctuating and fractured jaws stood open in a furious display of irrational hunger. There were scores of them. They gathered and stood almost motionless by the south side of the building. The believers knew in their minds and hearts they should abandon all sanity and run for their lives. But none of them moved. They too stood in rapture of the sight before them. That is until the butchery began. The nameless abominations moved in a mesmerizing manner and attacked their prey. The nauseous spectacle of miscarried souls murdering and mutilating their far-away living cousins painted the church with scarlet red that night. Only a couple of them managed to escape through the back door and return to town. The survivors are out of their minds and difficult to reason with. The events that transpired that night have changed them. A scholar and healer claims that it might take them months or even years to recover their minds.

The town watch sent a party of six guards today to explore the church and get rid of any threat. They have not returned yet but it is still to soon to declare their mission a failure. Should they not return, the townspeaker is ready to offer a bounty to adventurers or mercenaries. Their top priority is to save any remaining survivors and recover the church.

The massacre in the Church of Golden Petals was caused by an ancient ritual that no one knew about. It was, for all intents and purposes, a non-avoidable calamity. Four-hundred years before, the underground cave complex that became the crypts was the lair of a known villain. The man was Ortgo, a necromancer. Back then, the town did not exist and most of the area around the hill was a forest. Ortgo had a knack of using his necromancy spells in terrible ways. He affected the fauna and sometimes even the trees with his spells. His only antagonists were a triumvirate of druids who did their best to protect the forest from Ortgo.

The druids defeated Ortgo after a few weeks. While the necromancer was an accomplished spellcaster and a terrible foe. He was not powerful enough to confront the ire of the druids and the wild creatures at their command. In his dying moments, Ortgo’s jaded eyes displayed a malignant look. He pronounced one last enchantment and claimed that he would return to have his revenge when the Realm of Dread completed its fifth revolution. The druids disregarded his words as those of a delirious person. Ortgo died and his remains were consumed by the soil around him.

The Realm of Dread is a pseudo-plane that affects necromantic magic and, according to some scholars, can be referred to as being in a state of co-existence with the Material Plane, or as an orb that orbits it. Ortgo’s dying ramblings were not empty words but a powerful curse. Four-hundred years later the Realm of Dread orbited the Material Plane five times and the spirit of Ortgo returned to a state of quasi-existence. The miasmal ghost of Ortgo is nothing but a nebulous, nonsensical reminder of what he was. The only thing that remains is the morbid desire for vengeance. The spirit arose other benign spirits around it and corrupted them with its noxious darkness. The rest is history.

The front doors are ajar. The dead body of a member of the town watch lies motionless next to the door. The man features a multitude of bite wounds. The left side of his body was eaten by the undead. A successful DC 13 Wisdom (Survival) check reveals the presence of at least 10 different sets of footsteps approaching the entrance from the graveyard.

The entrance of the church is divided from the nave by a stone wall that reaches the ceiling. The murals of the Church of Golden Petals decorate this hallway. But they are all stained with fresh blood from the people who tried to escape a few nights ago. The incomplete bodies of at least three people litter the floor.

Jen Alistee’s quarters are simple and minimalistic. A figure appears to sleep on the bed under the sheets. There is a large splotch of blood on the floor in front of the bed. The creature on the bed is Jenn, but she is now a ghoul. It appears to hold some memories from its living existence. That is why it returned to its bed.

The office features a wooden desk packed with papers and books. They are all bookkeeping logs and storage logs. The room is in disarray.

The nave features a scene from a horror story. At least twenty incomplete bodies lie limp on the floor of this chamber in different positions. The stone tiles under them drenched in dry blood. In dazzling dissonance, the furniture and objects behind the altar are all in pristine condition. The nagging murmuring grunts of six ghouls looking for life among the corpses completes the scene. Their perfidious stare changes when a group of living creatures enters the room. They attack!

The graveyard beside the church has barely enough room for a few more tombstones. A large opening on the east side reveals the entrance to the crypts. The soil in front of a few tombstones was recently unearthed as some of the ghouls return to the living world from them. The body of a town guard lies on the floor in between two tombstones. His skin looks dry and crystalline. He is too slim to have been alive. The poor man looks desiccated, as if he had no muscle mass.

A thick mist covers the graveyard and it coalesces into vague peculiar forms, similar to people. 8 shadows emerge from below and attack any intruder.

A large opening on the floor leads to the crypts. The shaft appears vertical but it soon slants westwards and becomes an irregular stairway. The fetid smell from below is repugnant and sacrilegious.

The second floor of the nave features two benches and a large organ-piano. The undead have not visited this area. There are two farmers hiding behind the organ. They have ruined the interior of the expensive instrument to make room for themselves but they are alive. Despite their current predicament, their mental-state is good. They are exhausted and hungry but able to help the adventurers.

The room was last used fifteen years ago when the last remains were added to the crypts. A large wooden table dominates the room. There are some rusted iron implements used for embalming and the treatment of corpses.

The clean bones of the rest of the town guards are in this location. Their identity is implied from the pieces of armor around them which all depict the town sigil. A group of 4 ghouls and 1 ghast still gnaw on their bones trying to get a little more meat off of them. The undead profanities stand up when the adventurers enter their realm and attack in a stupendous display of insanity and turbulent hunger.

An open wooden casket is the only man-made fixture in this area of the crypts. It appears to be old but never used. Perhaps it was going to be used just before the town closed off the crypts.

The walls of this room feature an uncountable amount of niches. It appears that most of them are occupied. The thickening air in the room causes a strange sensation of lack of air. It is colder and almost palpable. The immortal souls of those buried here were also touched by Ortgo’s unspeakable darkness. Five of them emerge from their receptacles in the form of shadows and attempt to steal the life force of any intruders.

Ortgo’s ancient ritual room is still tainted by his terrible spells. The area around the magic circle is desecrated. Ortgo’s spirit manifests in the form of a ghost. Unknown to anyone who comes, he has achieved his revenge. Three other spirits accompany him for eternity and obey his commands. They are the three druids who once defeated him. They are now wraiths with no control over their actions.

These are the general features of the Church of Golden Petals. It is located outside of a large town; a five minutes walk from the town palisade gates.

Terrain. The church and graveyard are surrounded by grassy hills and a few trees. The church is on high ground and the nearby town is visible from its doorsteps. The floor inside the church and the ritual room (Area 13) feature well-preserved stone tiles. The floor in the crypts is rough but even. Squares partially occupied by a piece of furniture or object are considered difficult terrain.

Doors. The two doors that lead outside the church are reinforced with iron bands and average locks. Both can also be secured with wooden panels from the inside. They are currently unlocked. The rest of the wooden doors inside the church feature only a locking latch. A successful DC 12 Dexterity (Thieves Tools) check allows a character to lockpick an average lock.

Light. Magical candles on the walls of the church produce dim light. The crypts are in complete darkness.

Smells and Sounds. The smell of rot and decay surround the church and graveyard and can be detected from as far as 30-feet from the entrance. The sounds of the undead in the area eating and growling are always in the distance.