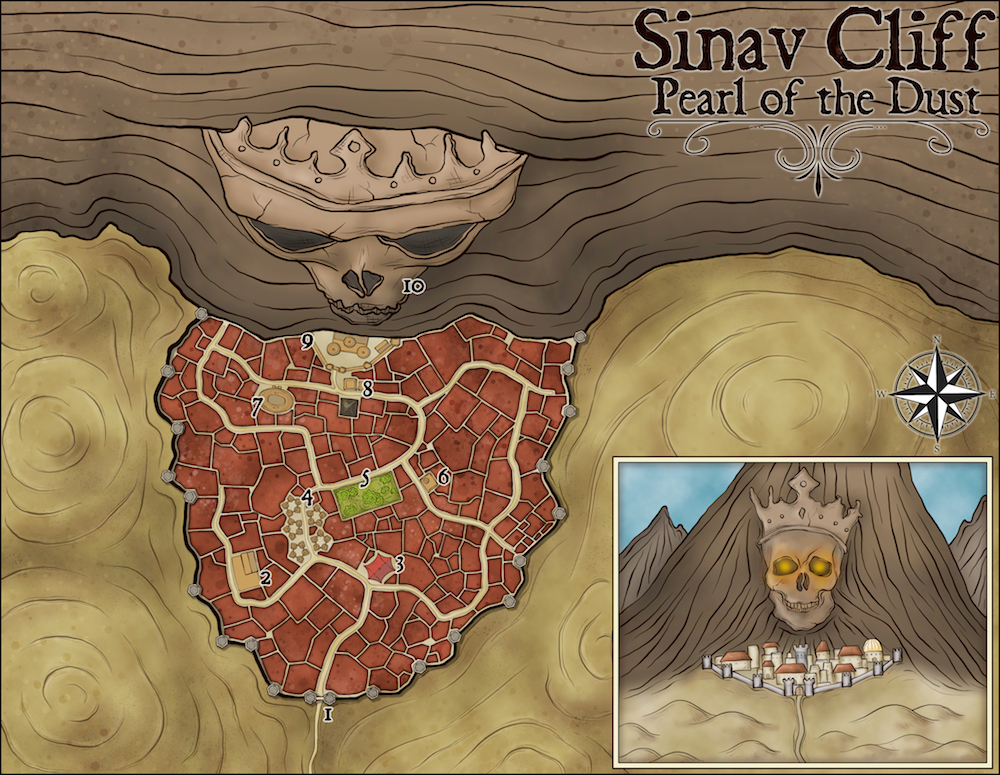 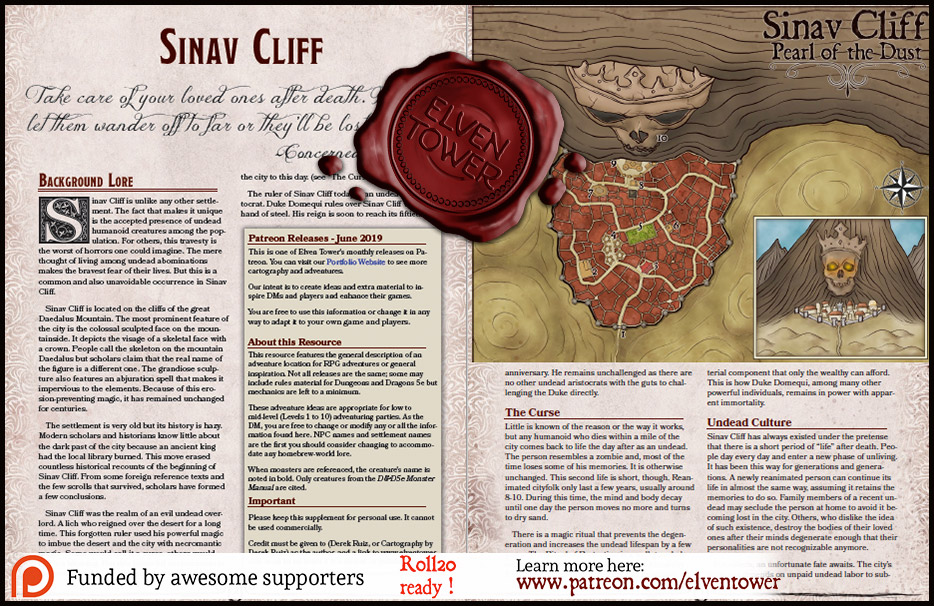 Sinav Cliff is unlike any other settlement. The fact that makes it unique is the accepted presence of undead humanoid creatures among the population. For others, this travesty is the worst of horrors one could imagine. The mere thought of living among undead abominations makes the bravest fear of their lives. But this is a common and also unavoidable occurrence in Sinav Cliff.

Sinav Cliff is located on the cliffs of the great Daedalus Mountain. The most prominent feature of the city is the colossal sculpted face on the mountainside. It depicts the visage of a skeletal face with a crown. People call the skeleton on the mountain Daedalus but scholars claim that the real name of the figure is a different one. The grandiose sculpture also features an abjuration spell that makes it impervious to the elements. Because of this erosion-preventing magic, it has remained unchanged for centuries.

The settlement is very old but its history is hazy. Modern scholars and historians know little about the dark past of the city because an ancient king had the local library burned. This move erased countless historical recounts of the beginning of Sinav Cliff. From some foreign reference texts and the few scrolls that survived, scholars have formed a few conclusions.

Sinav Cliff was the realm of an evil undead overlord. A lich who reigned over the desert for a long time. This forgotten ruler used his powerful magic to imbue the desert and the city with necromantic magic. Some would call it a curse, others would call it a blessing. But this powerful enchantment is the source of the undead aura that still pervades the city to this day. (see “The Curse” below)

The ruler of Sinav Cliff today is an undead aristocrat. Duke Domequi rules over Sinav Cliff with a hand of steel. His reign is soon to reach its fiftieth anniversary. He remains unchallenged as there are no other undead aristocrats with the guts to challenging the Duke directly.

Little is known of the reason or the way it works, but any humanoid who dies within a mile of the city comes back to life the day after as an undead. The person resembles a zombie and, most of the time loses some of his memories. It is otherwise unchanged. This second life is short, though. Reanimated cityfolk only last a few years, usually around 8-10. During this time, the mind and body decay until one day the person moves no more and turns to dry sand.

There is a magic ritual that prevents the degeneration and increases the undead lifespan by a few years. The Ritual of Protection is a well-guarded secret of the upper echelons of the city hierarchy. This ritual, rumor has it, requires an expensive material component that only the wealthy can afford. This is how Duke Domequi, among many other powerful individuals, remains in power with apparent immortality.

Sinav Cliff has always existed under the pretense that there is a short period of “life” after death. People day every day and enter a new phase of unliving. It has been this way for generations and generations. A newly reanimated person can continue its life in almost the same way, assuming it retains the memories to do so. Family members of a recent undead may seclude the person at home to avoid it becoming lost in the city. Others, who dislike the idea of such existence, destroy the bodies of their loved ones after their minds degenerate enough that their personalities are not recognizable anymore.

For others, an unfortunate fate awaits. The city’s economy depends on unpaid undead labor to subsist. This is the only type of slavery permitted in the city. Any person can own an undead humanoid as long as the undead is unable to identify himself and prove it was not a slave before first presented. This is difficult because the memory loss of resurrection makes many people instantly employable for slave labor. For the rest, it is only a matter of time before memory fades away and the undead person finds itself under the yoke of the city’s industry. Once an undead is branded a slave worker, an iron band on their necks brandishes their status. If they remain somewhat sociable, they may serve as street vendors. For the mindless, factory work remains. It is common to see the undead roam around the city mindlessly performing whatever they were ordered to do.

Most do not care about all this. After all, the majority of undead are amnesiac and some of them degenerate in a form of insanity. Some people think that there is honor in serving after death. These terrible things are accepted in the zeitgeist of the city, regardless.

The Blood Gate features a large entrance flanked by two large watchtowers. It is required that any person crossing the gate cuts his palm with a dagger and drops a few drops of blood onto the sand below. Despite the strangeness of the ritual, no excuses are accepted under any circumstance. All visitors must pay the blood price to enter. Many believe this is the only entrance to Sinav Cliff but there are a few secret passageways in other sections of the wall.

The city keeps a garrison of 250 soldiers; most of them live in the barracks. While the city benefits from the natural protection of the desert and it has only been sieged twice in written history, the barracks are kept full and ready for any eventuality. The soldiers usually work as city guards in times of peace. No undead can become soldiers as they degenerate too fast for combat-oriented activities.

Ringmaster Solomon is one of the wealthy undead who can afford immortality. He owns the Pearl of Dust Circus. The attractions in the circus change constantly because all performers are undead. Most do not last long; they go insane and become unusable to Salomon. Many in the city despise Salomon for enriching himself and becoming immortal on the efforts of fellow undead. The reality is that this is the case for every other immortal undead in the city.

An alternative and cheaper version of the Ritual of Protection allows the undead to decay into dust and be stored in a niche. Such dust remains sentient and becomes immortal but only within the magical confines of the niche library. The library holds the sentient remains of thousands of people. These remains retain their memories and have become an important source of information about the past. New entries are added every year as the library organically grows. It is not wise to believe everything the shadows from the past tell you in the library, however. Some may still have an agenda.

With the clever combination of necromancy and transmutation, the city mages maintain a verdant paradise in the middle of the desert. Sinav Park is without question the only beautiful place within the city, under the beauty standards of foreign travelers. A stone plaque near the center of the park marks the place where the entrance to a hidden mausoleum was before the creation of the park. Rumor has it that the great Daedalus is buried down there but no one can say for sure.

The Rot-Ridden Bone is the largest inn and tavern in the city. The owner is an undead half-orc named Garahor. Garahor has been rich enough to afford the Ritual of Protection for the past two decades. His time is running out soon and the business has failed as of late. He does not have the money to pay for the expensive ritual. The protection should fail in about a month. If he cannot find a solution to this predicament his body and mind will decay soon after.

With an unlimited supply of undead humanoids with no regard for their existence, an arena is the terminal fate of most cityfolk. The Red Arena is the pinnacle of the depravity of Sinav Cliff. All kinds of events take place in this circus of violence. Some events consist of living champions fighting hordes of undead. Other events are about hordes of undead in different states of deterioration fighting each other while the crowds laugh, cry, bet, and enjoy. Once a month there is an undead tournament reserved for recently undead only. Twenty undead fight in a melee and try to defeat all others. Whoever wins earns 10 years worth of the Ritual of Protection.

This courthouse deals with criminals and offenders. Under most circumstances, the offender is condemned to undead servitude under one of the several slave overlords in the city. The court pressed by the constant demand for more undead labor to produce as many guilty individuals as possible.

Duke Domequi, the ruler of Sinav Cliff, lives here. The fort features a wall and a small soldier garrison. No one is allowed to enter the fort unless the Duke commands it. The Duke is so paranoid that he sees conspiracies and assassination attempts everywhere. He is by far the oldest entity in the city. He has enough wealth to be immortal indefinitely, but it appears that even the Ritual of Protection cannot make a human mind remain sane after centuries. Duke Domequi is slowly becoming more paranoid, senile, and demented. The close circle around him notice it often now. They have started to plan a coup to remove him from power and pray that the Duke’s insanity stops him from noticing their conspiring.

The large skeletal face on the mountainside remains unchanged thanks to erosion-preventing spells. The face is otherwise just a sculpted rock formation. A group of specially appointed people has the job of lighting two large braziers inside each of the face’s eyes. A set of inlaid stairs climb up the mountainside to the eyes. The eyes are lit at night. From afar, the natural glow from the braziers gives the face a semblance of life.

These are the general features of Sinav Cliff. It is located on the skirts of the great Daedalus Mountain, under the shadow of a colossal sculpted skeletal face.

Terrain. Sinav Cliff is located in the middle of the Red Desert. The area around the city consists of rolling dunes and dry earth. People traveling to Sinav Cliff may need to face the consequences of extreme temperatures or a terrible sandstorm.

Entrance. Customary to the city, a person must pay entrance by spilling a few drops of blood before crossing the main gate. Local stories claim that this small sacrifice powers the undead aura in the city. These claims are not true.

Undead Aura. When a humanoid creature dies in Sinav Cliff or within a mile of it, the person returns to life as a semi-sentient undead creature. These undead resemble zombies upon first reanimating. This corrupted afterlife lasts around 10 years. During this time, the body and the mind decay further and degenerates. Some people have access to magic rituals to increase this period and avoid degeneration. The ritual has a costly material component that reserves this measure to the wealthy only.

Smells. The high number of undead creatures in the area produce a smell of decay and rot all around the city. This smell, however, fades into nothingness after a few days in the city. It is only apparent and abhorrent to first-time visitors.