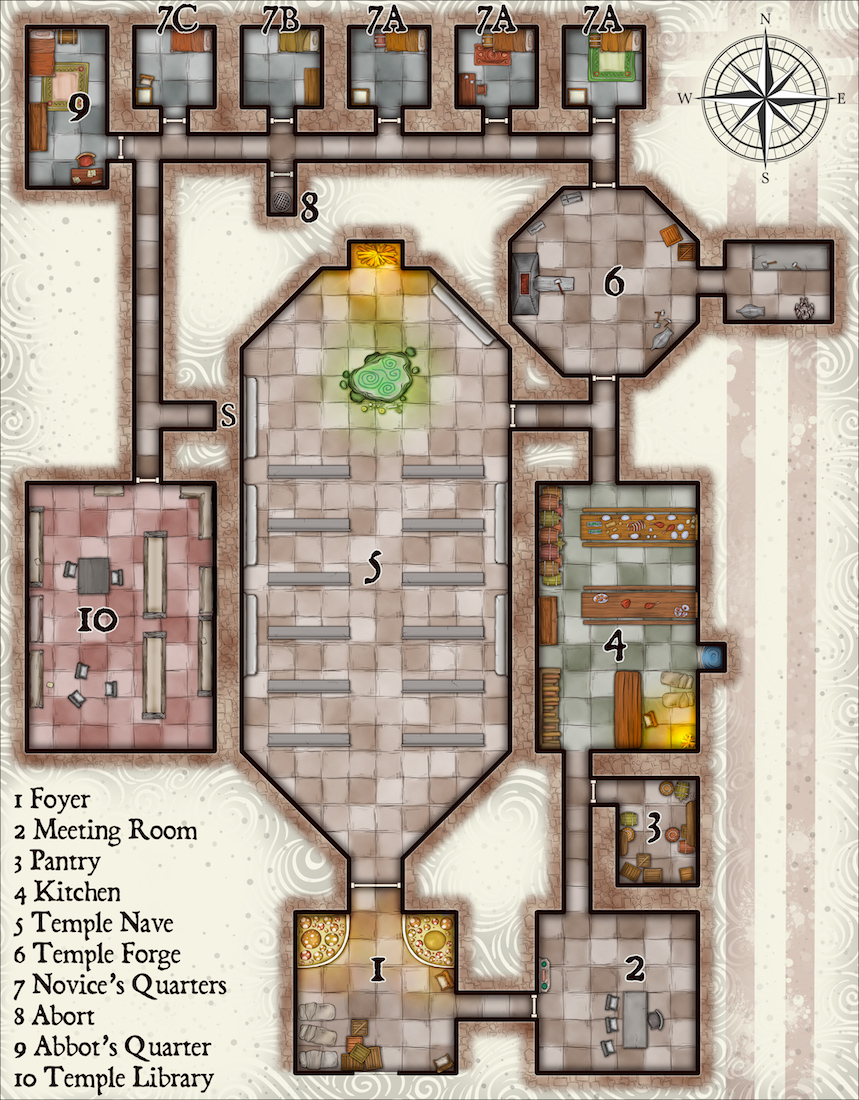 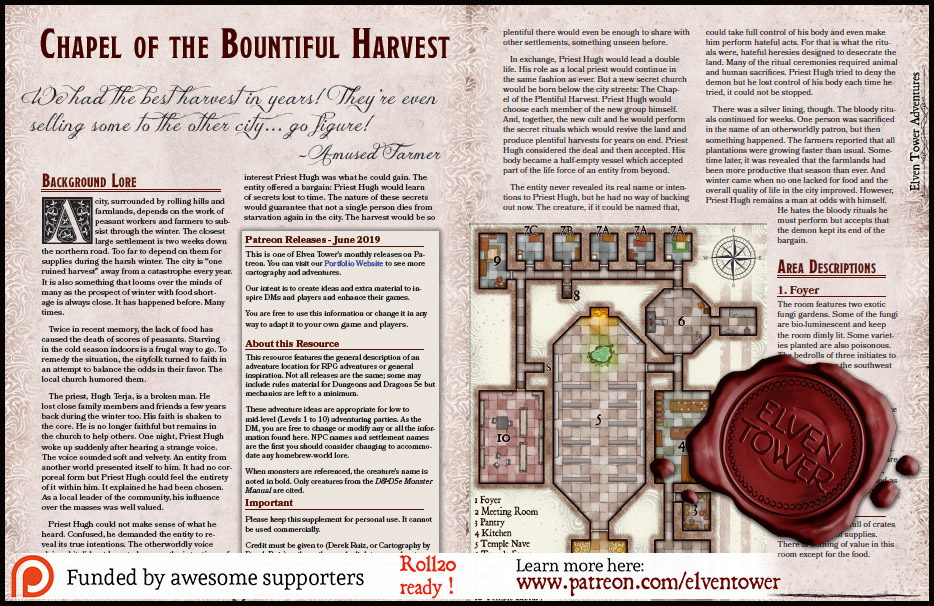 A city, surrounded by rolling hills and farmlands, depends on the work of peasant workers and farmers to subsist through the winter. The closest large settlement is two weeks down the northern road. Too far to depend on them for supplies during the harsh winter. The city is “one ruined harvest” away from a catastrophe every year. It is also something that looms over the minds of many as the prospect of winter with food shortage is always close. It has happened before. Many times.

Twice in recent memory, the lack of food has caused the death of scores of peasants. Starving in the cold season indoors is a frugal way to go. To remedy the situation, the cityfolk turned to faith in an attempt to balance the odds in their favor. The local church humored them.

The priest, Hugh Terja, is a broken man. He lost close family members and friends a few years back during the winter too. His faith is shaken to the core. He is no longer faithful but remains in the church to help others. One night, Priest Hugh woke up suddenly after hearing a strange voice. The voice sounded soft and velvety. An entity from another world presented itself to him. It had no corporeal form but Priest Hugh could feel the entirety of it within him. It explained he had been chosen. As a local leader of the community, his influence over the masses was well valued.

Priest Hugh could not make sense of what he heard. Confused, he demanded the entity to reveal its true intentions. The otherworldly voice claimed it did not have to because the intentions of a being from a world not of his own could not be fathomed by the locals. The only thing that should interest Priest Hugh was what he could gain. The entity offered a bargain: Priest Hugh would learn of secrets lost to time. The nature of these secrets would guarantee that not a single person dies from starvation again in the city. The harvest would be so plentiful there would even be enough to share with other settlements, something unseen before.

In exchange, Priest Hugh would lead a double life. His role as a local priest would continue in the same fashion as ever. But a new secret church would be born below the city streets: The Chapel of the Plentiful Harvest. Priest Hugh would choose each member of the new group himself. And, together, the new cult and he would perform the secret rituals which would revive the land and produce plentiful harvests for years on end. Priest Hugh considered the deal and then accepted. His body became a half-empty vessel which accepted part of the life force of an entity from beyond.

The entity never revealed its real name or intentions to Priest Hugh, but he had no way of backing out now. The creature, if it could be named that, could take full control of his body and even make him perform hateful acts. For that is what the rituals were, hateful heresies designed to desecrate the land. Many of the ritual ceremonies required animal and human sacrifices. Priest Hugh tried to deny the demon but he lost control of his body each time he tried, it could not be stopped.

There was a silver lining, though. The bloody rituals continued for weeks. One person was sacrificed in the name of an otherworldly patron, but then something happened. The farmers reported that all plantations were growing faster than usual. Sometime later, it was revealed that the farmlands had been more productive that season than ever. And winter came when no one lacked for food and the overall quality of life in the city improved. However, Priest Hugh remains a man at odds with himself. He hates the bloody rituals he must perform but accepts that the demon kept its end of the bargain.

The room features two exotic fungi gardens. Some of the fungi are bio-luminescent and keep the room dimly lit. Some varieties planted are also poisonous. The bedrolls of three initiates to the cult are near the southwest corner.

Priest Hugh or one of the novice priests interview new members in this chamber. Interviews turn into interrogations and then, if successful, they would-be members become initiates. If they are deemed unworthy of the cult, they are imprisoned and used as sacrifices in the next ceremony.

The pantry is often full of crates and barrels full of supplies. There is nothing of value in this room except for the food.

Many people work and dine in this chamber every day. Priest Hugh, the five novice priests, helpers, and initiates eat here at least twice a day. There are 2d6 initiates in this room at any given time. The barrels piled by the west wall have ale and wine in them.

The main temple is used once a week. On the last day, at midnight. The church gets half full with the current number of initiate members. A strange-looking stone close to the northern end of the chamber serves as a sacrificial stone. Innocent people are butchered in this location for the profit of entities from another world. The stone radiates a smell of putrid remains. A fire is kept going at all times behind the stone.

A secret passage behind a shelf by the western wall serves as a shortcut to the library. Only Priest Hugh uses it but all members of the church now of it. It does not guard anything because the library is accessible by a longer path.

This is a new addition to the church. Two new initiates are smiths in the city and suggested a forge would be a great thing. They told Priest Hugh they could arm the initiates and, thus, create a militant force. Priest Hugh hated the idea but the entity inside him forced him to accept this idea with enthusiasm. The two smiths started a week ago to manufacture spears and shields.

Four of the novice priests’ quarters are occupied. Priest Hugh trains them and shares the secrets he learned from the entity. The entity has recently revealed that the novice priests are being prepared for a similar type of occupation Priest Hugh suffers. Other entities from beyond the veil will come and take control of them too. Priest Hugh does not know when but it will happen soon.

This location is of no importance to the complex. It is a direct access point to the city’s sewers. It may be used by anyone as an emergency exit. Tracking people through the sewers is almost impossible.

Priest Hugh is referred to as “The Abbot” by most of the congregation. This is his resting chamber. As of late, this is also the only place where the entity speaks to him directly. It chooses not to do so in public unless it is to take control of his actions. There is a spot of blood on the bed from last week when Priest Hugh tried to kill himself with a kitchen knife. He did not succeed because the entity stopped him short and disposed of the knife.

The library features nine stone bookcases. Most books are in readable conditions but others have succumbed to time. The library contains literature classics, theological works, and plenty of historical reference material. There are no spellbooks or documents which depict any of the beliefs or practices of the Chapel of The Plentiful Harvest. The entity (or Priest Hugh) have not made any effort to record their actions in written form.

These are the general features of The Chapel of the Plentiful Harvest. It is located deep underground, under the local church. It is located in an underground complex which used to be part of the church’s catacombs.

Terrain. The stone tiles throughout the complex are in good condition and pose no restriction to movement. Some locations feature many pieces of furniture or objects. Passing through an occupied square counts as difficult terrain for the purposes of tactical movement.

Doors. All doors in the complex are standard wooden doors with average quality locks. An adventurer can bypass an average lock with a successful DC 14 Dexterity (Thieves Tools) check.

Light. All chambers feature sconces for torches on the walls. However, they are only lit when the room is in use. The fires in Area 5 and Area 4 are on most of the time. Area 1 features dim-light from bio-luminescent fungi.

Smells and Sounds. Area 1 has a pungent smell of rotten fungi. Area 5 smells of death and decay. The sacrificial stone near the bottom of the chamber smells like putrid remains.