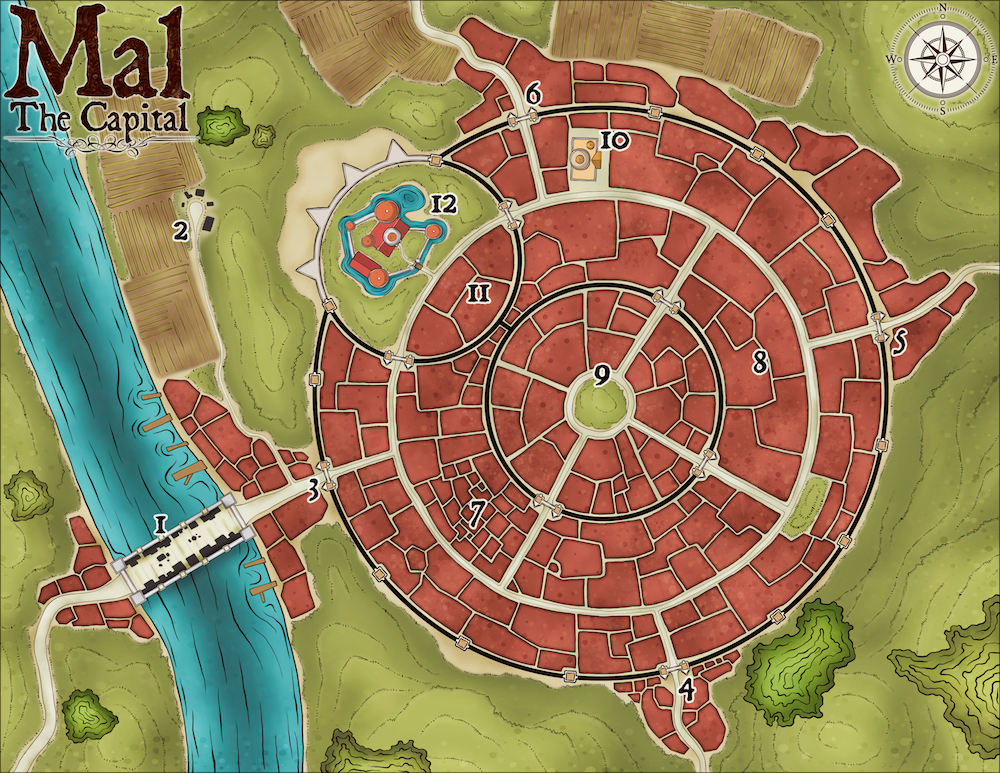 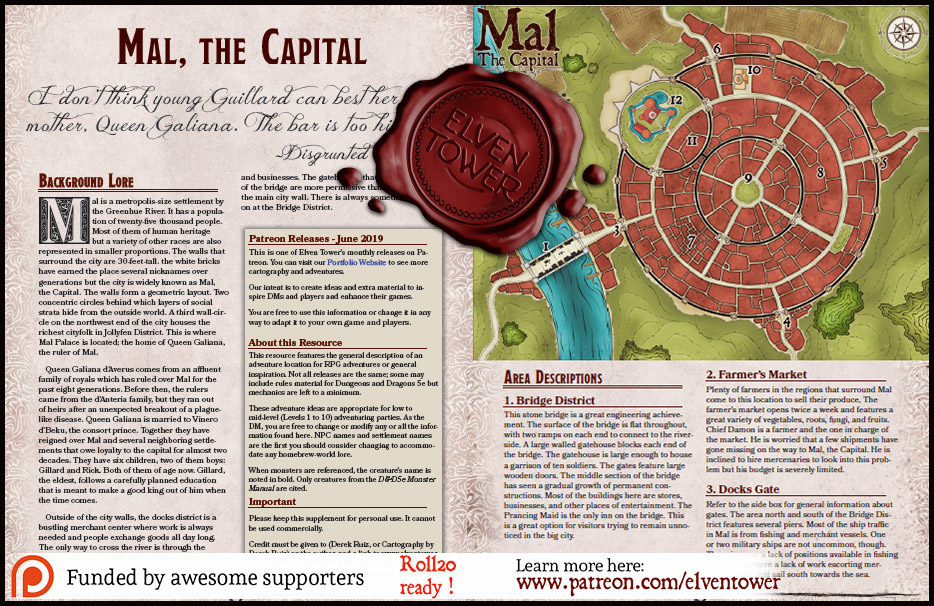 Mal is a metropolis-size settlement by the Greenhue River. It has a population of twenty-five thousand people. Most of them of human heritage but a variety of other races are also represented in smaller proportions. The walls that surround the city are 30-feet-tall. the white bricks have earned the place several nicknames over generations but the city is widely known as Mal, the Capital. The walls form a geometric layout. Two concentric circles behind which layers of social strata hide from the outside world. A third wall-circle on the northwest end of the city houses the richest cityfolk in Jollyfen District. This is where Mal Palace is located; the home of Queen Galiana, the ruler of Mal.

Queen Galiana d’Averus comes from an affluent family of royals which has ruled over Mal for the past eight generations. Before then, the rulers came from the d’Anteria family, but they ran out of heirs after an unexpected breakout of a plague-like disease. Queen Galiana is married to Vinero d’Beku, the consort prince. Together they have reigned over Mal and several neighboring settlements that owe loyalty to the capital for almost two decades. They have six children, two of them boys: Gillard and Rick. Both of them of age now. Gillard, the eldest, follows a carefully planned education that is meant to make a good king out of him when the time comes.

Outside of the city walls, the docks district is a bustling merchant center where work is always needed and people exchange goods all day long. The only way to cross the river is through the Bridge District. The bridge is wide enough to house a small permanent population and a lot of stores and businesses. The gatehouses that flank each end of the bridge are more permissive than the ones on the main city wall. There is always something going on at the Bridge District.

This stone bridge is a great engineering achievement. The surface of the bridge is flat throughout, with two ramps on each end to connect to the riverside. A large walled gatehouse blocks each end of the bridge. The gatehouse is large enough to house a garrison of ten soldiers. The gates feature large wooden doors. The middle section of the bridge has seen a gradual growth of permanent constructions. Most of the buildings here are stores, businesses, and other places of entertainment. The Prancing Maid is the only inn on the bridge. This is a great option for visitors trying to remain unnoticed in the big city.

Plenty of farmers in the regions that surround Mal come to this location to sell their produce. The farmer’s market opens twice a week and features a great variety of vegetables, roots, fungi, and fruits. Chief Damon is a farmer and the one in charge of the market. He is worried that a few shipments have gone missing on the way to Mal, the Capital. He is inclined to hire mercenaries to look into this problem but his budget is severely limited.

Refer to the side box for general information about gates. The area north and south of the Bridge District features several piers. Most of the ship traffic in Mal is from fishing and merchant vessels. One or two military ships are not uncommon, though. There is never a lack of positions available in fishing ships, nor is there a lack of work escorting merchant barges that sail south towards the sea.

Refer to the side box for general information about gates. The road goes south in almost a straight line towards a coastal city three days away. Some merchants use this road instead of a river barge because there are plenty of small towns along the way to sell and buy things from.

Refer to the side box for general information about gates.

Refer to the side box for general information about gates. This is considered by many the most important entrance. It is the one used by foreign dignitaries and the official farewell area for the local army whenever it travels north.

This neighborhood is a bubbling hub for merchants, mercenaries, salesmen, and anyone willing to sell or buy anything. Be it a thing or a service, people most often than not find whatever they look for in this section of the city. If you know how to ask around, you may even find a seller or forbidden substances and objects. A local criminal guild holds some control over the area but their influence is only starting to expand to other districts. Jorlyn’s End is also a great place to find a buyer of relics, old coinage, objects of art, old furniture, and pretty much anything a mercenary may find in an old dungeon or ruin.

Sales of such items are not forbidden by the city but a tax of 30% is charged to all transactions of that kind. The only way to avoid this tax, commonly perceived as abusive, is to acquire a Letter of Marque signed by Queen Galiana. Such a document is difficult to acquire because the person must be able to procure an audience with the queen herself. It goes unsaid that most people will never get such an opportunity in their lifetime.

This mid-class neighborhood is a nice and still somewhat affordable place to live. Many store owners or expert craftsmen have their homes in this area of the city. Several popular places of commerce can be found here too. The popular Malennesse Inn is the most popular hospitality provider in the city. It is a two-story circular building that mimics the overall shape of the city’s outer walls. The Vieranni Stage is a small theater with just enough space to seat 30 people where an elves-only group of performers delights the audience in exchange for a steep-priced ticket. The best night entertainment can be had at the Purveyors’ Cafe. This location is a restaurant, bar, and also a brothel. The owner, Harvin, is a popular and powerful man in town. He owns a villa in Jollyfen District.

Mid to high-class people live in this central location. It is commonly believed that only members of the nobility are allowed to live here. It is not true, a few rich peasants, owners of profitable businesses call this place home too.

Schools of thought and religious beliefs are plentiful in such a large city. The House of the Immortals is an attempt to reconcile as many faiths in the same place. Not all churches agree with this form of faith amalgamation.

The highest echelon of social circles calls Jollyfen their home. It is located within the small circular wall that also houses Mal Palace. Councilmen, high-ranking officers, wealthy businessmen, and factory owners are the usual tenants. The two gatehouses that give access to this section of the city are, by far, the more discriminatory when it comes to who gains access to the place. Unless a person already lives or works there, or has a written invitation, they will not be allowed to enter unless they pay a silver piece and wear fine clothing.

The palace has a 20-feet-deep moat that surrounds the entirety of it. A single drawbridge facing southeast is the only access point. As it is, the palace has never been stormed but it is supposed to withstand a mid-sized raid. The palace walls are 20-feet-tall. From afar, the most noticeable sections of the palace are its 3 towers and 2 spires. Queen Galiana sometimes visit the palace’s central spire to admire the view of the city and the farmlands to the north.

These are the general features of the capital city, Mal. It is located next to the Greenhue River. A three days travel from the nearest shore (south).

Terrain. The area that surrounds the capital features rolling hills, some plantations, and a few patches of forested area. The climate is temperate throughout the year except for the winter which hits the region hard.

Demographics. (human 95%, elves 2%, dwarves 1%, other 2%) Mal is a predominantly human settlement. A smaller proportion of other races are commonplace at all levels in the capital’s social circles.

Gates. The city features four outer gates. These gates open at sunrise and close 1 hour after dawn. The guards stationed at the gates are very strict with these schedules. The entrance of all visitors and locals is recorded on logs and all cargo is inspected on sight. The passage is slow because of all this, but a well placed gold coin may speed up the process, depending on the guard in charge.

Bridge District. The grandiose bridge that crosses the Greenhue River features many shops, merchant carts, and even an inn. Both sides of the river feature gatehouses. The gates have the same schedule as those on the main wall but the guards are more lenient and permissive, even at night. No inspection of cargo takes place in the bridge but a toll of 1 sp per cart is mandatory.