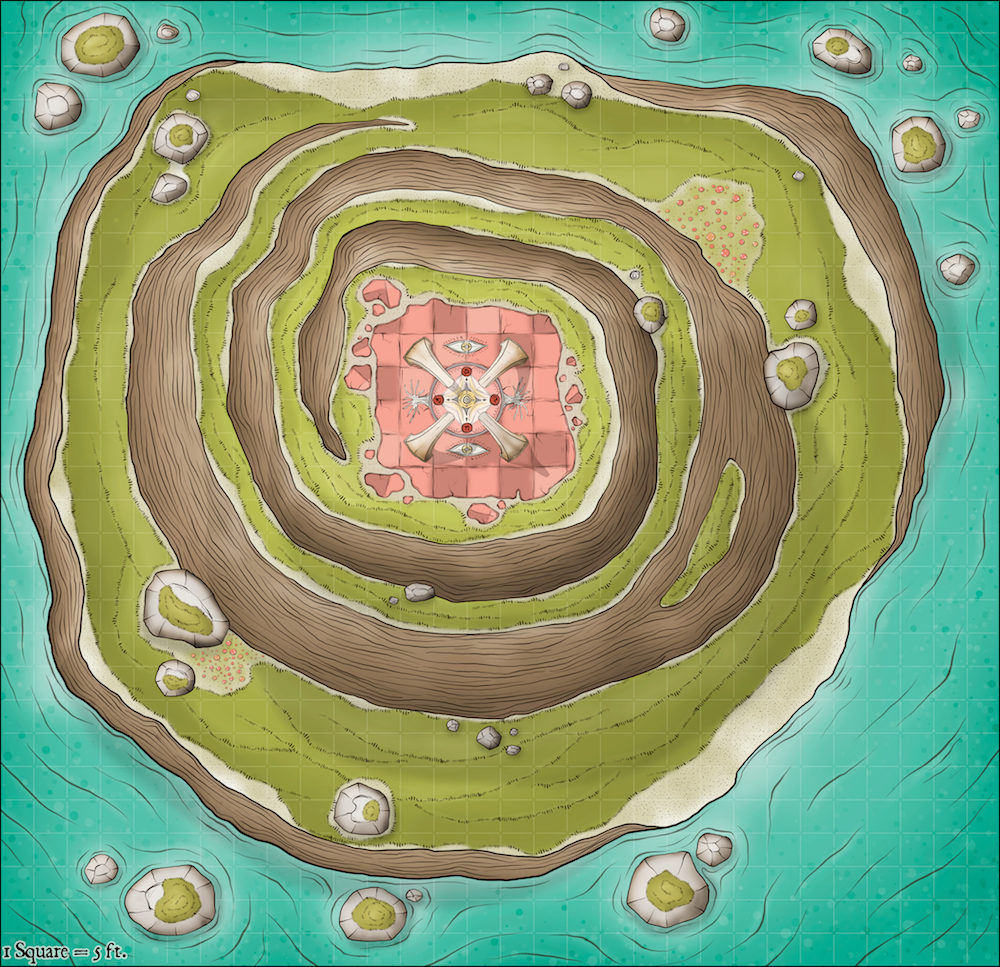 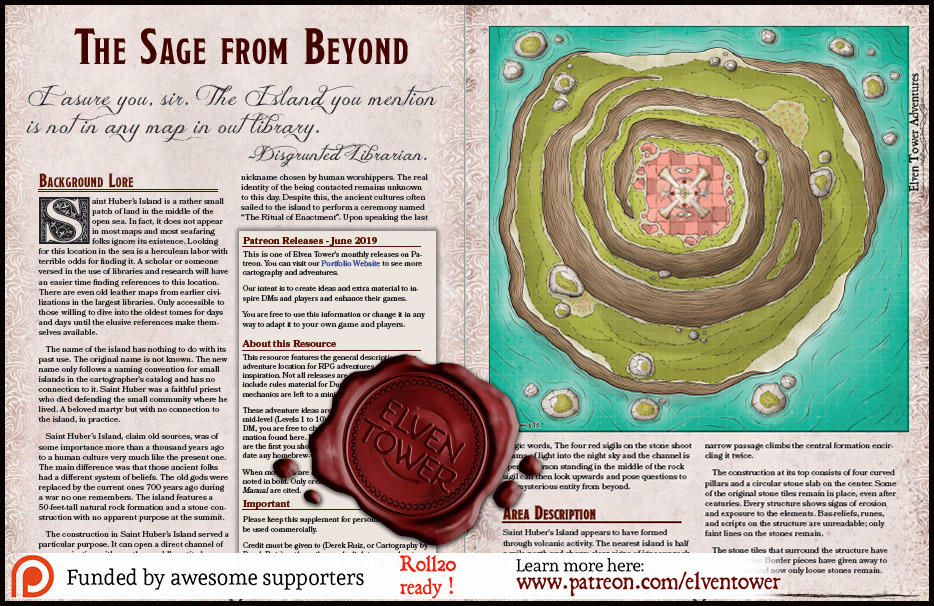 Saint Huber’s Island is a rather small patch of land in the middle of the open sea. In fact, it does not appear in most maps and most seafaring folks ignore its existence. Looking for this location in the sea is a herculean labor with terrible odds for finding it. A scholar or someone versed in the use of libraries and research will have an easier time finding references to this location. There are even old leather maps from earlier civilizations in the largest libraries. Only accessible to those willing to dive into the oldest tomes for days and days until the elusive references make themselves available.

The name of the island has nothing to do with its past use. The original name is not known. The new name only follows a naming convention for small islands in the cartographer’s catalog and has no connection to it. Saint Huber was a faithful priest who died defending the small community where he lived. A beloved martyr but with no connection to the island, in practice.

Saint Huber’s Island, claim old sources, was of some importance more than a thousand years ago to a human culture very much like the present one. The main difference was that those ancient folks had a different system of beliefs. The old gods were replaced by the current ones 700 years ago during a war no one remembers. The island features a 50-feet-tall natural rock formation and a stone construction with no apparent purpose at the summit.

The construction in Saint Huber’s Island served a particular purpose. It can open a direct channel of communication with an otherworldly entity known only as “the seamstress”. Cross-reference of available sources reveals that this name is nothing but a nickname chosen by human worshippers. The real identity of the being contacted remains unknown to this day. Despite this, the ancient cultures often sailed to the island to perform a ceremony named “The Ritual of Enactment”. Upon speaking the last magic words, The four red sigils on the stone shoot beams of light into the night sky and the channel is open. A person standing in the middle of the rock sigil can then look upwards and pose questions to the mysterious entity from beyond.

Saint Huber’s Island appears to have formed through volcanic activity. The nearest island is half a mile north and shows clear signs of igneous rock formations on its shores (from lava activity). Saint Huber’s Island features three elevation levels. A narrow passage climbs the central formation encircling it twice.

The construction at its top consists of four curved pillars and a circular stone slab on the center. Some of the original stone tiles remain in place, even after centuries. Every structure shows signs of erosion and exposure to the elements. Bas-reliefs, runes, and scripts on the structure are unreadable; only faint lines on the stones remain.

The stone tiles that surround the structure have no clear border. Border pieces have given away to the elements and now only loose stones remain.

The Keepers of the Stone

There is a terrible fact not mentioned in any reference text or document about the island. Adventurers wishing for a calm stay there will find their expectations unmet. The place is not in complete abandonment. The ancient wardens of the sage still guard the place against unworthy visitors.

Upon reaching the top of the island where the stone slab is, the four ghastly protectors emerge from below (wraiths). Their ephemeral bodies pass through the rocks unimpeded. They appear only during a full moon night, the only time the Ritual of Enactment can occur. Their appearance is that of tall humanoid priests dressed in large tunics and low-hanging capes. Their faces are serious, strict, and have that expression of looking down upon whoever stands before them. The wardens are silent, their only purpose to bring woe upon visitors. Should those pilgrims be strong enough to banish or destroy the wardens, they will be allowed to carry on with the ritual.

The caster(s) must stand in the center of the rock sigil and perform a precise combination of somatic and verbal components. The caster must then procure 3 dead toads, 1 live lamb, and seven small rubies. These material components are consumed by the ritual. After this, the four red sigils react and shoot beams of orange light upwards. Anyone standing on the stone hears a clear voice inside their heads that says: “You have called upon me. I await your questions. For I shall be the light that destroys all doubts”.

These are the general features of Saint Huber’s Island. It is located two days away from the nearest shore.

Light. Temperature and light conditions are dependent on the weather and the time of day. The island is in the open sea and features little to no refuge from the elements.

Smells and Sounds. The smell of saltwater and sometimes decaying algae is an ever-present feature of the island. Visitors perceive a low-pitched hum when standing next to the large sigil rock on the summit. The hum stops temporarily when a channel of communication with the sage opens.